Human infections due to Mycobacterium have been mainly attributable to Mycobacterium tuberculosis (TB) (1). However, species of mycobacterium other than Mycobacterium avium(M. leprae) that cause clinical disease have been identified, such as non-tuberculous mycobacteria (NTM). Similar to TB, NTM infections can occur throughout the body. However, pulmonary infections, lymphadenitis, skin, and soft tissue infections are the most commonly described (2). The prevalence of NTM has been increasing in recent years, and thus the number of related surgeries. The estimated incidence of pulmonary NTM disease in Japan has increased from 1.5 per 100,000 in 1985 to 3.52 in 1997 (3). However, the effectiveness of surgery for NTM remains unclear. According to the 2007 American Thoracic Society/Infectious Diseases Society of America (ATS/IDSA) statement on NTM, the primary treatment involves a multidrug treatment regimen (4). Moreover, surgery for NTM is performed for patients in whom pulmonary nodules are resistant to antimycobacterial therapy. However, pulmonary nodules suspected to be lung cancer are commonly treated surgically to reveal NTM. We also observe cases of granuloma that are suspected to be NTM; however, no bacteria are detected.

This study aimed to clarify the clinical outcomes of the therapeutic resection and video-assisted thoracoscopic (VATS) biopsy for NTM or granuloma suspected to be NTM (gsNTM).

Between January 2003 and December 2017, 82 patients (83 surgeries) underwent therapeutic resection and VATS biopsy for NTM in the Tokyo Metropolitan Cancer and Infectious Diseases Center Komagome Hospital. A retrospective chart review was performed for the clinical records. This study was performed after obtaining approval from the institutional review board. Most pulmonary nodules were suspected to be lung cancer but were subsequently revealed to be NTM or gsNTM. Patients suspected of NTM underwent bronchoscopy and confirmed their diagnosis on bronchoalveolar lavage. All the patients with proven NTM infections (diagnosed from bronchoalveolar lavage) were given preoperative treatment with antimycobacterial therapy, including various combinations of clarithromycin, ethambutol, and rifampicin (3) (Figure 1). We defined gsNTM as granuloma and histiocytes or macrophages were observed in the resected nodules and no bacteria were detected in Ziel-Neelsen stain. We retrospectively reviewed the clinical and bacterial findings, preoperative and postoperative antimycobacterial therapy, surgical procedure, pathological findings, and NTM progression. Data collection and analyses were approved, and the need to obtain written informed consent from each patient was waived by the Institutional Review Board of Komagome Hospital. The duration of NTM progression following resection was calculated from the date of the surgical procedures and analyzed with the Kaplan-Meier method. Potential prognostic factors of progression-free survival were analyzed with the log-rank method and the Cox proportional hazards model. P values <0.05 were considered significant. We used EZR Version 1.35 (Saitama Medical Center, Jichi Medical University, Saitama, Japan) for statistical analyses.

Figure 1 Flow chart of patients analyzed in this study. 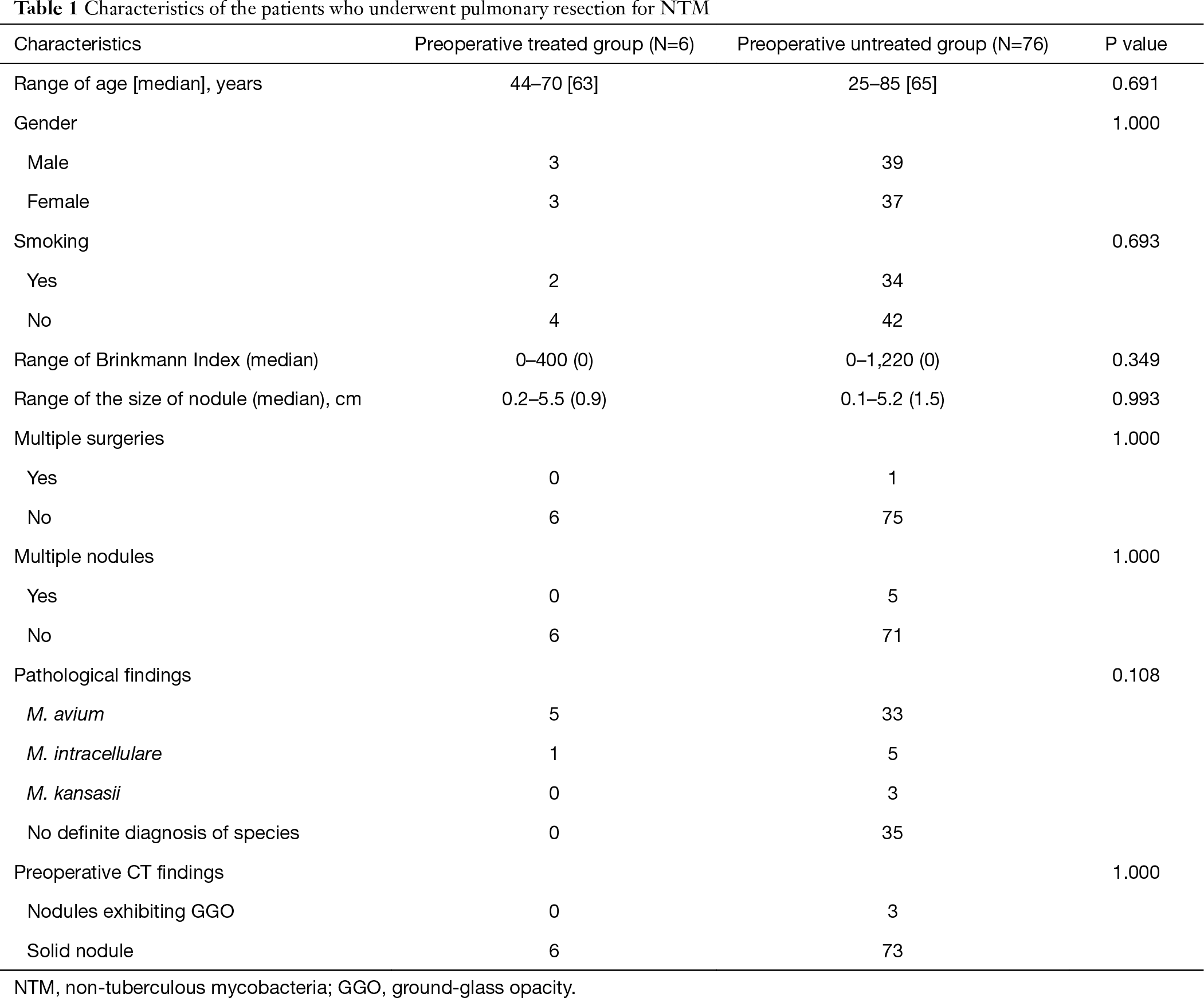 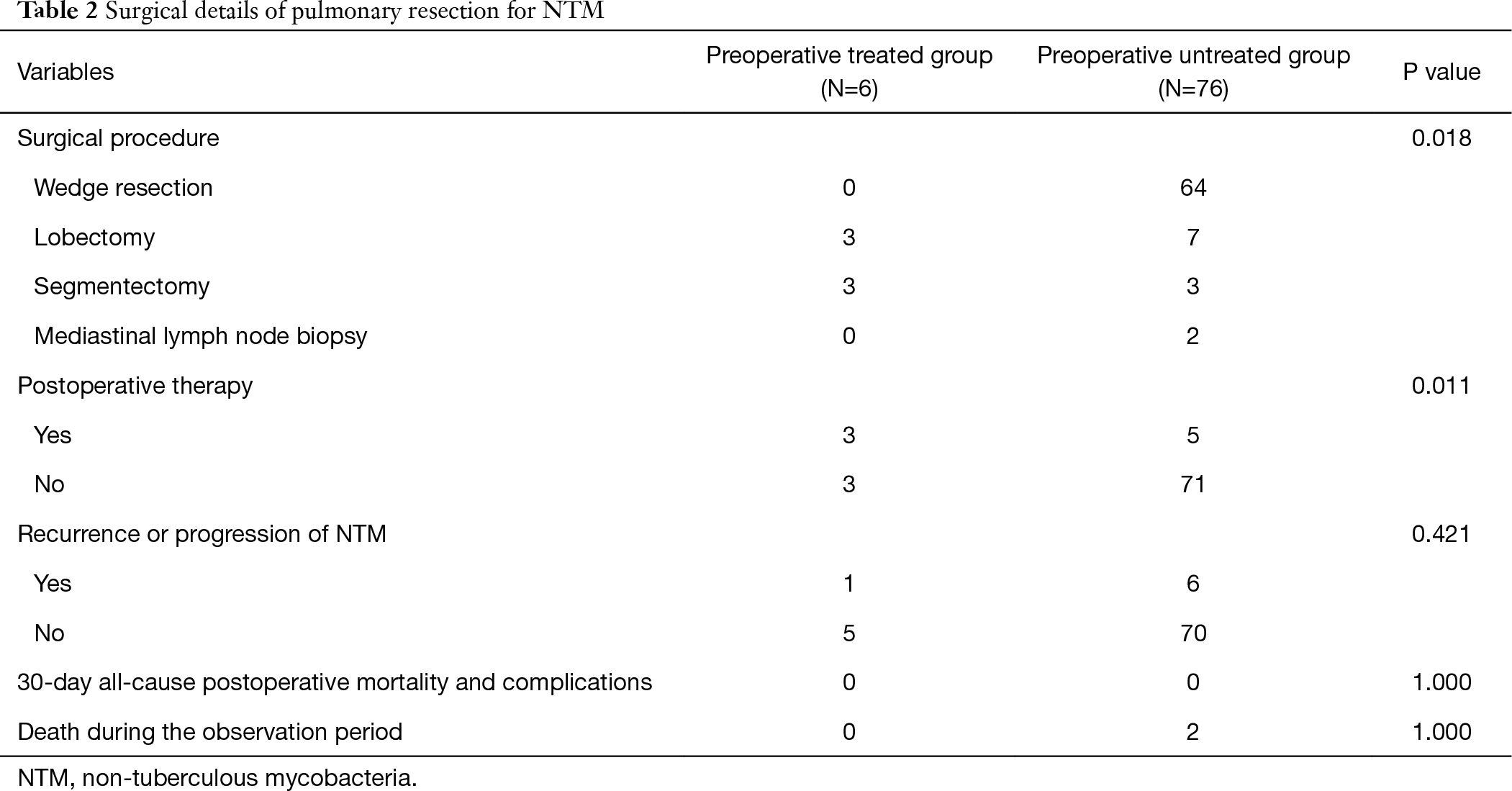 We performed lobectomy or segmentectomy in all the cases in the preoperatively treated group. We performed postoperative treatment in 8 cases and only surgery in 74 cases. NTM progression was observed in 7 cases, and 2 patents died due to causes other than lung disease; the cause of death was colorectal cancer in 1 case and interstitial pneumonia in 1 case.

Figure 2 Progression-free survival curves of preoperative treated and untreated patients with pulmonary resection (A) and complete resection (B) for NTM.

This study evaluated the outcomes in 82 patients who underwent VATS biopsy for NTM lung disease. The treatment of NTM lung disease is challenging with medication alone; however, the introduction of new antimycobacterial therapy improved the outcome of using medical treatment alone (4,5). However, the most common indication in our case for surgery was the diagnosis of pulmonary nodules suspected to be lung cancer (untreated group). The second indication was a poor response to antibiotic therapy (treated group). Pathological findings showed that M. avium was the most frequent pathology in both the groups, and gsNTM (46%) of the untreated group. We performed VATS in all 82 patients (83 cases, 100%); the surgical procedures were lobectomy in 3 cases and segmentectomy in 3 cases in the preoperative treated group; the procedure was wedge resection in 64 cases (65 surgeries), lobectomy in 7 cases, segmentectomy in 3 cases, and mediastinal lymph node biopsy in 2 cases in the preoperative untreated group. The postoperative complication rate was none in both the groups. In recent studies, resected NTM cases were reported after the diagnosis was confirmed; however, there are few reports of undiagnosed cases (6-10). Thus, the present study is the first case series to evaluate the role of resection surgery for undiagnosed NTM lung disease.

NTM is found in the soil and water, and can produce opportunistic lung infections. The indolent nature of NTM disease may result in extensive parenchymal destruction, resulting in respiratory failure and vulnerability to airway infection; this may prove fatal (6,7). However, the true incidence and prevalence of pulmonary NTM disease remains unclear, and reports suggest that the prevalence of pulmonary NTM disease is increasing (3). In many species of mycobacteria classified as NTM, only a few species of NTM are known to cause pulmonary disease (4). In Japan, M. avium complex (MAC) are the most common, and M. kansasii is the second most common NTM (8). Moreover, M. kansasii is the only NTM disease that can be successfully treated with a multidrug regimen alone (9). In our cases, only 3 patients were infected with M. kansasii, were given only surgery and postoperative progression or recurrence was not observed.

With respect to surgeries for pulmonary NTM, based on the 2007 ATS/IDSA statement, in 2008, guidelines were published for surgical therapy for pulmonary NTM disease (1). The guideline showed that surgical therapy is intended to control the patients’ disease condition. NTM is caused by environmental mycobacteria, as previously described, therefore, patients who have undergone surgery may exhibit relapse or reinfection in the remaining lungs. It is difficult to achieve complete cure with only surgery. The policy also emphasizes the importance of pre- and post-operative chemotherapy. Whether patients who undergo surgical resection of a solitary nodule related NTM can be exempted from post-operative chemotherapy remains controversial.

Concerning the procedure of lung resection, segmentectomy or greater resection is recommended because NTM can progress throughout the airways. However, the optimal timing of surgery remains ambiguous; the guidelines (1) recommend that surgery should be performed after at least 3–6 months of chemotherapy. In clinical practice, the duration of pre-operative chemotherapy tends to be longer. Shiraishi and colleagues reported that the duration of preoperative chemotherapy ranged from 3.3 to 75.2 months (median, 14.2 months) (9). However, there are cases that cannot be treated because of adverse events, such as liver damage; early surgery is performed in these cases.

This study has certain limitations. First, there was a selection bias in the decision-making regarding surgery. Patients with multiple comorbidities were excluded from surgery. These selection criteria favor surgical outcomes by eliminating patients who were expected to have poor prognosis. If all the patients underwent surgery, the outcomes might have been similar to those with only medical therapy. Second, we did not compare our patients with those who developed NTM but did not undergo surgical resection. This would have given context to the surgery indications and may have allowed us to compare the duration of antimycobacterial treatment and long-term outcomes in both the groups. Another limitation of this study was the relatively small size and heterogeneity of the patient sample that considerably limited our ability to analyze the predictors of progression.

Despite these limitations, as a few cases were reported on resected proven or probable NTM, multicenter prospective study including surgical indication is aimed.

We analyzed patients who underwent VATS biopsy for pulmonary NTM infections. We need to reconsider the surgical procedure for single pulmonary NTM lesion and whether adjuvant chemotherapy is necessary for NTM treatment.

Ethical Statement: Data collection and analyses were approved (No. 2092), and the need to obtain written informed consent from each patient was waived by the Institutional Review Board of Komagome Hospital. The authors are accountable for all aspects of the work in ensuring that questions related to the accuracy or integrity of any part of the work are appropriately investigated and resolved.