Escalation of drug resistance in Mycobacterium tuberculosis (MTB) furnishes a formidable challenge to the global control of tuberculosis (TB) (1). Delineation of the underlying mechanisms of anti-TB drug resistance is germane to the discovery of strategies in tackling this worldwide health care crisis. Aside from the development of new anti-TB drugs to circumvent the drug resistance scenarios to improve patient treatment outcomes, it appears pertinent to explore whether modulation of host factors or responses could help to ameliorate the probability of drug-resistant TB.

There is quite some evidence that rifampicin and isoniazid could produce oxidative burst in their antimicrobial mechanisms (2-4). Similarly, fluoroquinolones have also been shown to display such a phenomenon (5). In addition to the antioxidative capacity mounted by MTB to counteract the (bactericidal) oxidative burst associated with anti-TB drug challenge, development of a metabolically quiescent bacillary persister state also helps the challenged MTB to survive within host macrophages and tissue biofilms (6).

Bacterial persisters putatively arise in a stochastic manner, with influence from stress-inducible quorum sensing (7,8). MTB is well known to form persisters that play an important role in persistent infection requiring prolonged treatment (9). In recent years, there has been a surge in reports regarding the induction of bacterial persisters, including those of MTB by oxidative/nitrosative stress (or more broadly disturbance in redox homeostasis) (10-14). Upregulation or activation of efflux pump(s) that result in extrusion of substrates and drugs leading to low-level resistance (often referred as phenotypic tolerance) against anti-TB agents can operate in MTB persisters (15-17). It is conceivable that phenotypic tolerance does not usually occur in isolation, as revealed by accumulating experimental evidence (16,18,19). This initiation step is apparently of crucial importance in the march of bacillary resistance against anti-TB drugs (Figure 1). Phenotypic tolerance facilitates the development of genetic resistance in MTB that generally results from spontaneous chromosomal mutations, eventually leading to higher levels of resistance to anti-TB agents. While the exact triggers for such facilitation do not appear to be totally clear (20), fluctuation in drug levels, especially in the presence of those comorbidities of TB with oxidative stress inherent to their disease pathogenesis, might contribute. Diabetes mellitus and HIV infection, the two major comorbidities to TB globally are noted to have poorer TB treatment outcomes, inclusive of lower success, higher relapse and increased propensity for development of drug resistance. The likely underlying mechanism has been hypothesized to be the induction of MTB persisters, as a core dormancy response to the oxidative stress furnished by the various players (Figure 1) (10,21). Importantly, both diabetes mellitus and HIV infection can be associated with malabsorption states with reduced drug bioavailability, resulting in erratic anti-TB drug levels (10,21). The afore-mentioned conceptual model regarding the development of antituberculosis drug resistance is a simplistic one. Further research is required to understand the complex underlying mechanisms better. 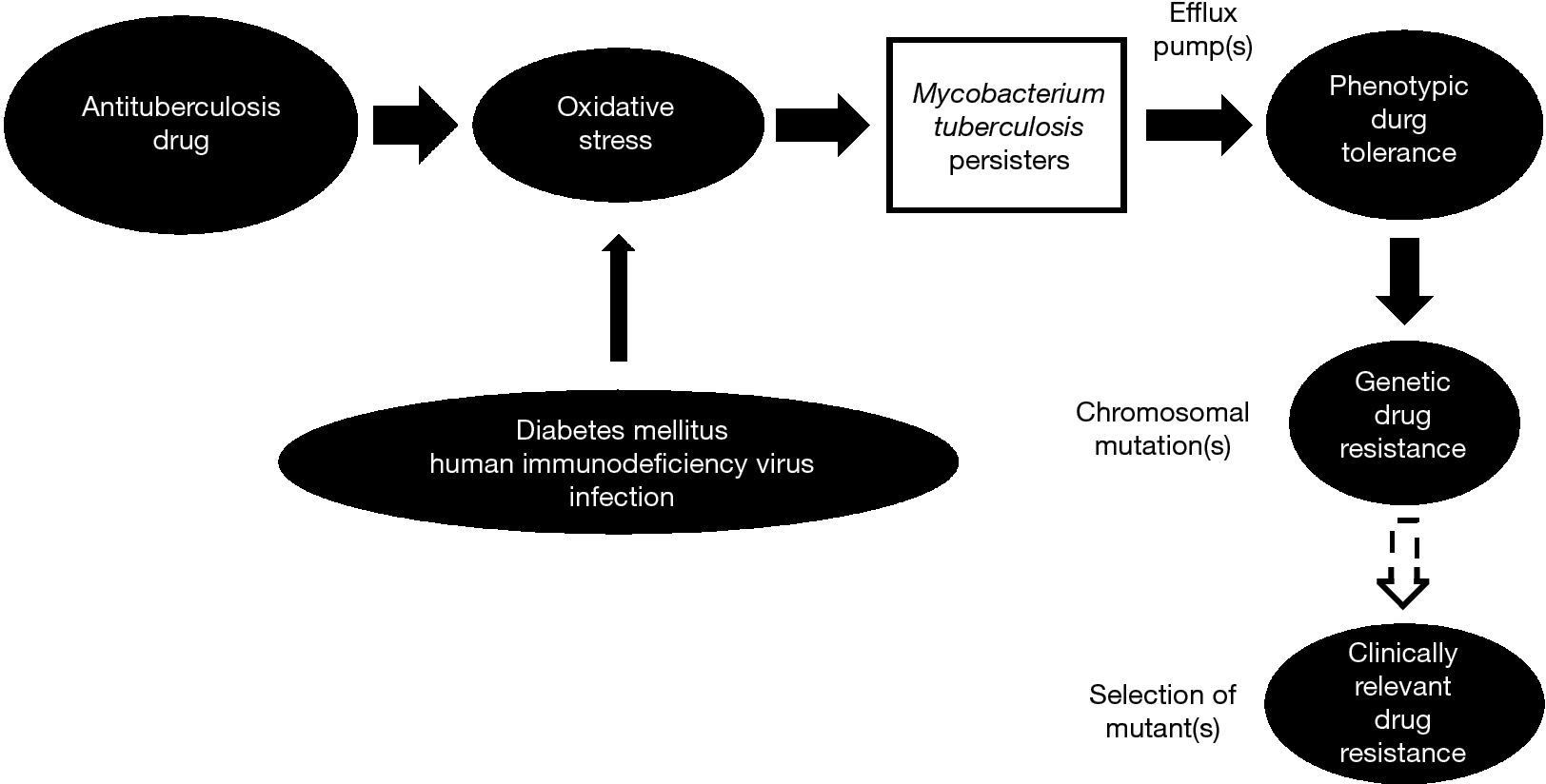 Clinically relevant drug-resistant TB adversely impacting treatment outcomes occur as a result of selection of the genetic mutants through man-made blunders that often exist in a poorly implemented TB programme, involving mainly doctors, administrators and patients (22). Suboptimal prescription (regarding drug dosage and drug scheduling) and inadequate drug supply, as well as poor treatment adherence are conducive to the drug resistance scenarios currently prevailing in many parts of the world.

The contributing role of oxidative stress, alongside its interaction with immunological dysfunction, to antituberculosis drug resistance merits further unravelling through translational research and clinical research. Amelioration of oxidative stress might conceivably help in preempting initiation of the march of drug resistance. Optimal metabolic control in diabetic patients can reduce oxidative stress, and so does better control of the viral load in HIV infection (10,21). Advancement in pharmacotherapy for HIV infection to circumvent inadvertent heightening of oxidative stress during antiviral therapy is likely beneficial (21,23). Furthermore, delineation of the role of antioxidants and other associated therapeutics as adjunctive strategy may be warranted (24). A potentially interesting example is vitamin C with both prooxidant and antioxidant activities that may help to enhance antituberculosis drug efficacy and reduce the risk of antituberculosis drug resistance (25,26). Last but not least, halting the march of anti-TB drug resistance mandates strengthening of the infrastructure of TB programmes to forestall the development of clinically relevant drug-resistant TB in many countries (27-29).

Conflicts of Interest: Dr. WW Yew was consultant to Otsuka Pharmaceutical Company until July 2016. The other authors have no conflicts of interest to declare.