Economic variations in patterns of care and outcomes of patients receiving invasive mechanical ventilation in China: a national cross-sectional survey

Mechanical ventilation (MV) is the cornerstone in the supportive management of patients with acute respiratory failure and has been reported to be used in about one-third of patients in intensive care units (1-3). MV did not become widely available in China until the 1980s. Meanwhile, with the rapid development of the country’s economy, healthcare system and international communication, the use and patient outcomes of patients with MV have been deeply influenced. However, an imbalanced economic development between the southeast coast and other regions has led to the imbalanced development of healthcare. Important economic variations in patterns of care have been described for the use of interventions such as blood transfusion (4), amputation (5), aneurysm repair (6), carotid revascularization (7), and outcomes of acute respiratory distress syndrome (ARDS) patients (8).

Understanding the economic variations in the management of patients with MV could lead to effective interventions to improve care. However, little information is available about the economic variations in management and outcomes of patients with MV in different provinces of China. Considering that China’s economy and medical development are extremely uneven, the hypothesis of the present study is that economic differences between different provinces in China will lead to differences in the management of MV and in patient outcomes. Therefore, we conducted a national observational study to investigate the effect of economic variations on management and outcomes in mechanically ventilated patients in China.

We report post hoc analysis data describing the economic variations of patients with invasive MV from a multicentre observational cohort study in China. The study was a 1-month (August 31, 2012, to September 30, 2012) prospective observational study to describe the implementation of MV and the outcomes of mechanically ventilated patients in Chinese intensive care units (ICUs). The 1-month period was arbitrarily decided upon by the researchers to enroll more than 400 patients in the 20 participating ICUs. All 20 participating ICUs were closed ICUs in tertiary teaching hospitals in metropolitan cities, managed by full-time ICU doctors. Participating ICUs were selected according to convenience. The protocol was approved by the Institutional Ethics Committee of Zhongda Hospital (the core centre, Approval No. 2012ZD11KY09.0). Informed consent was waived due to the observational nature of the study. The trial was registered at clinicaltrials.gov (NCT01666834).

All patients who were admitted to participating ICUs during the study period were screened for eligibility. During the enrolment period, patients who received invasive MV for more than 24 hours were enrolled. We excluded those patients who were younger than 18 years old and who have been invasively ventilated prior to the study.

For every enrolled patient, patient characteristics, underlying diseases, severity of illness, causes of MV, weaning process, and patient outcome were recorded. Ventilation settings, breathing patterns, sedative and analgesic were recorded on the first day of MV. Acute Physiology and Chronic Health Evaluation (APACHE) II score was assessed based on the worst variables recorded during the first 24 hours of ICU admission (9). All data were recorded at 9 a.m. each day, and the mean value of respiratory parameters in one minute was recorded. During assisted-controlled ventilation, plateau pressure and driving pressure analyses were confined to patients (n=448) in whom no evidence of spontaneous ventilation was detected (set and measured respiratory rates were equal). Plateau pressure was measured as airway pressure when the inspiratory flow rate was zero. Driving pressure was defined as plateau pressure minus positive end-expiratory pressure (PEEP). Protective ventilation was defined as tidal volume ≤8 mL/kg of predicted body weight (PBW) and plateau pressure ≤30 cmH2O. Ventilator-free days within 14 and 28 days after enrolment were recorded. If patients died during the 14- or 28-day period after enrolment, the number of ventilator-free days within 14 and 28 days was zero. All-cause ICU mortality, hospital mortality, 28-day mortality, ICU length of stay and hospital length of stay were recorded.

Statistical analysis was performed using SPSS 17.0 and STATA 14.1. Data are presented as the median (interquartile range). Continuous variables were compared with the use of one-way ANOVA or the Mann-Whitney test. Comparisons of proportions were made using Pearson’s chi-squared or Fisher’s exact tests. Nonparametric fitting was used to show the association between hospital mortality and tidal volume, peak pressure, plateau pressure and driving pressure graphically. Multivariate logistic regression analysis was used to detect the risk factors for hospital survival. Factors found to be significantly different between groups in univariate analysis were included in multivariate logistic regression analysis. Missing data were ignored during analysis. A significant difference was defined as P<0.05. 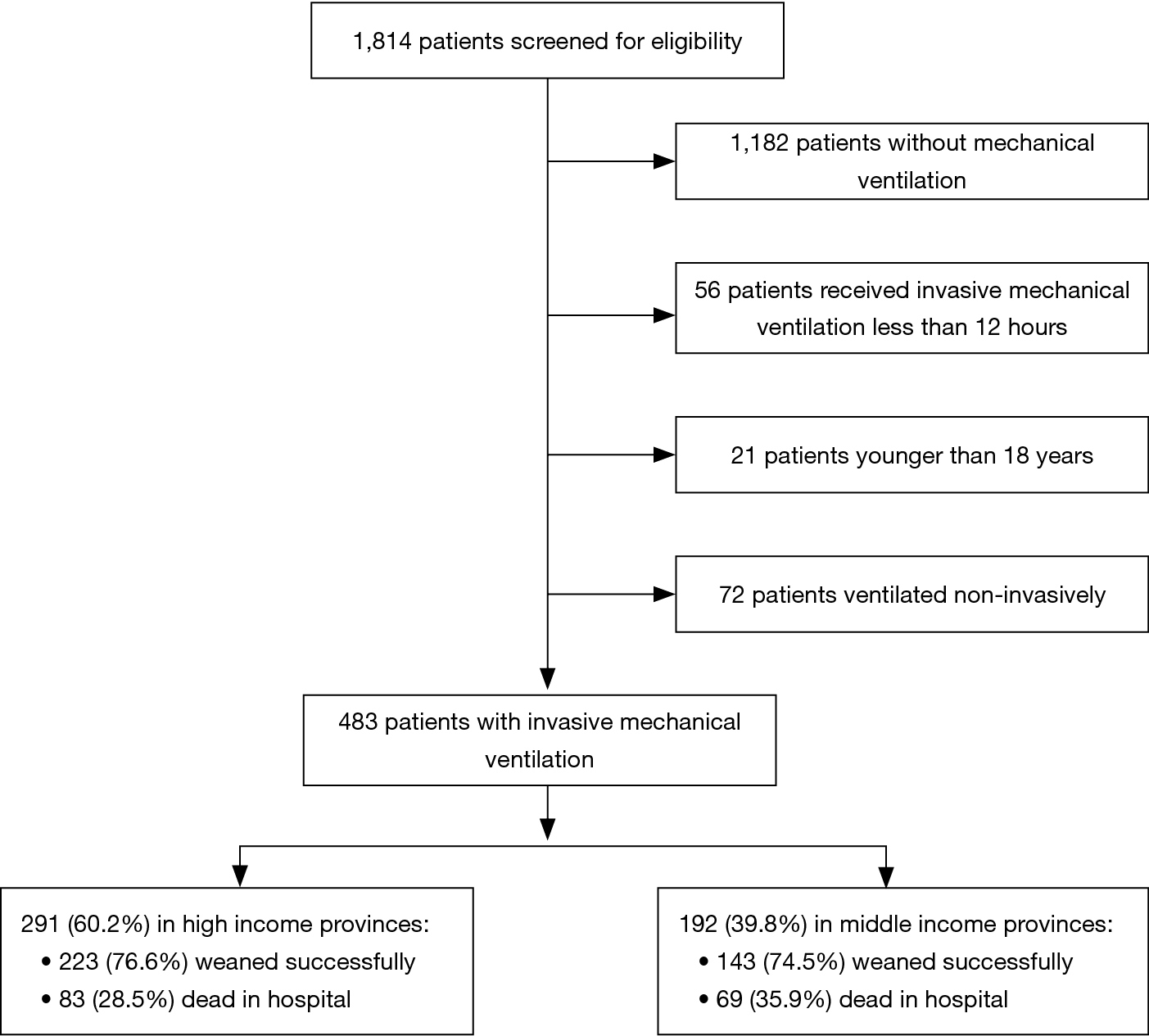 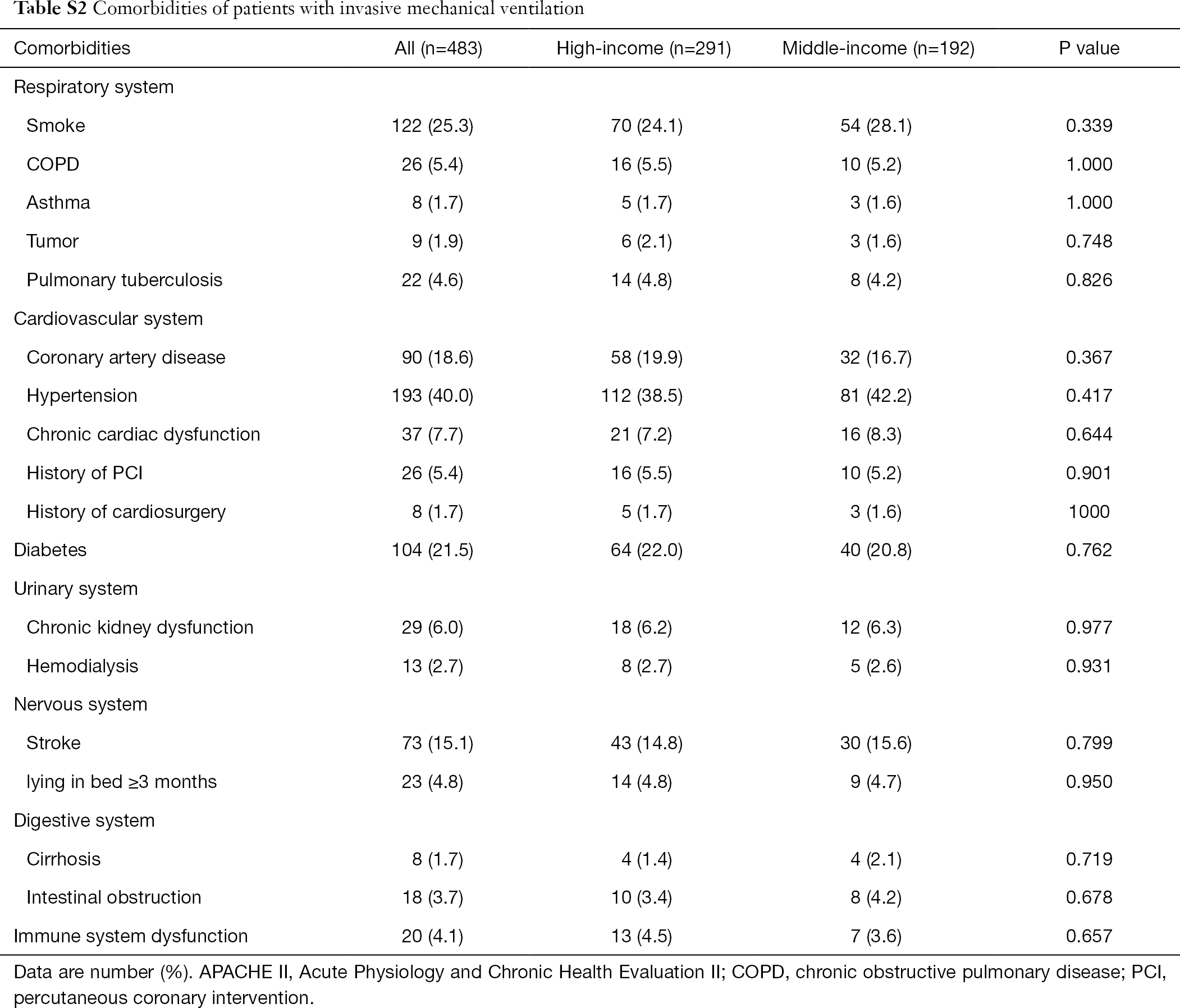 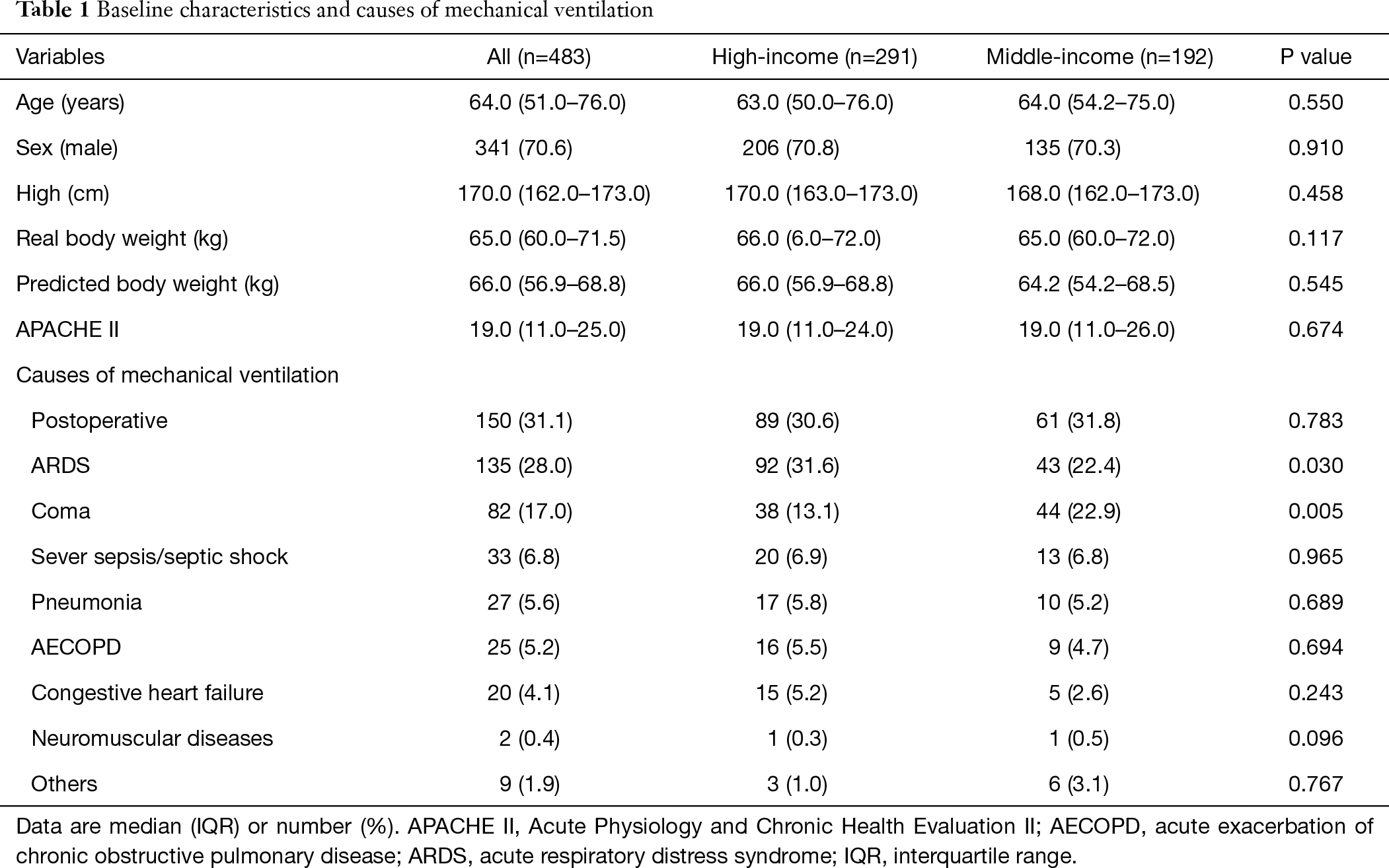 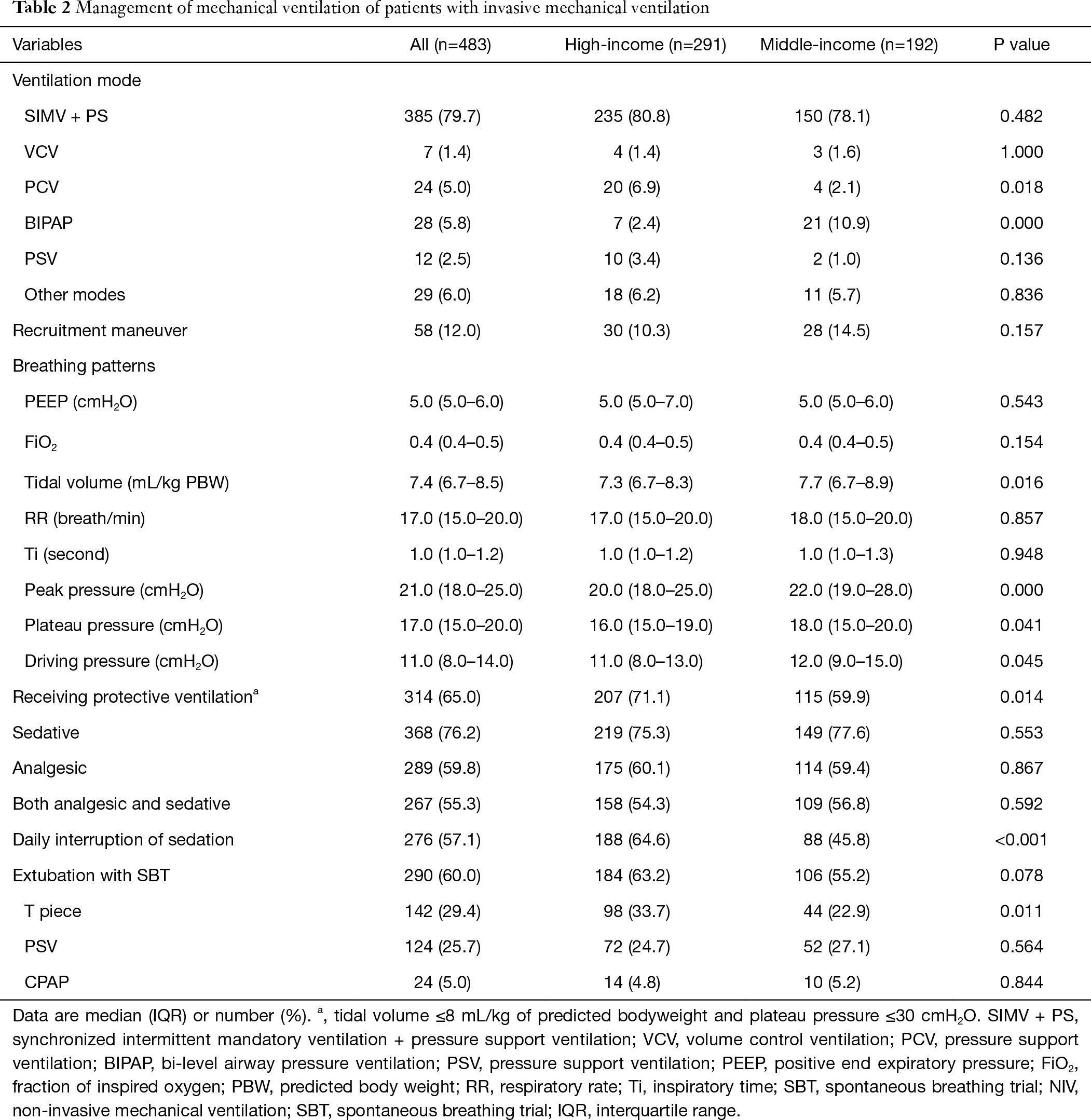 More patients received lower driving pressure (<15 cmH2O) and tidal volume (<6 mL/kg of PBW) in the high-income group than in the middle-income group (Figure 2A,B). As shown in Figure 2C, more patients in the high-income group distributed more in the low plateau pressure (P<0.05). In all mechanically ventilated patients, with the increase of peak pressure, plateau pressure and driving pressure, hospital mortality gradually increased. However, the tidal volume within the 6–8 mL/kg of PBW was associated with the lowest hospital mortality (Figure S1). 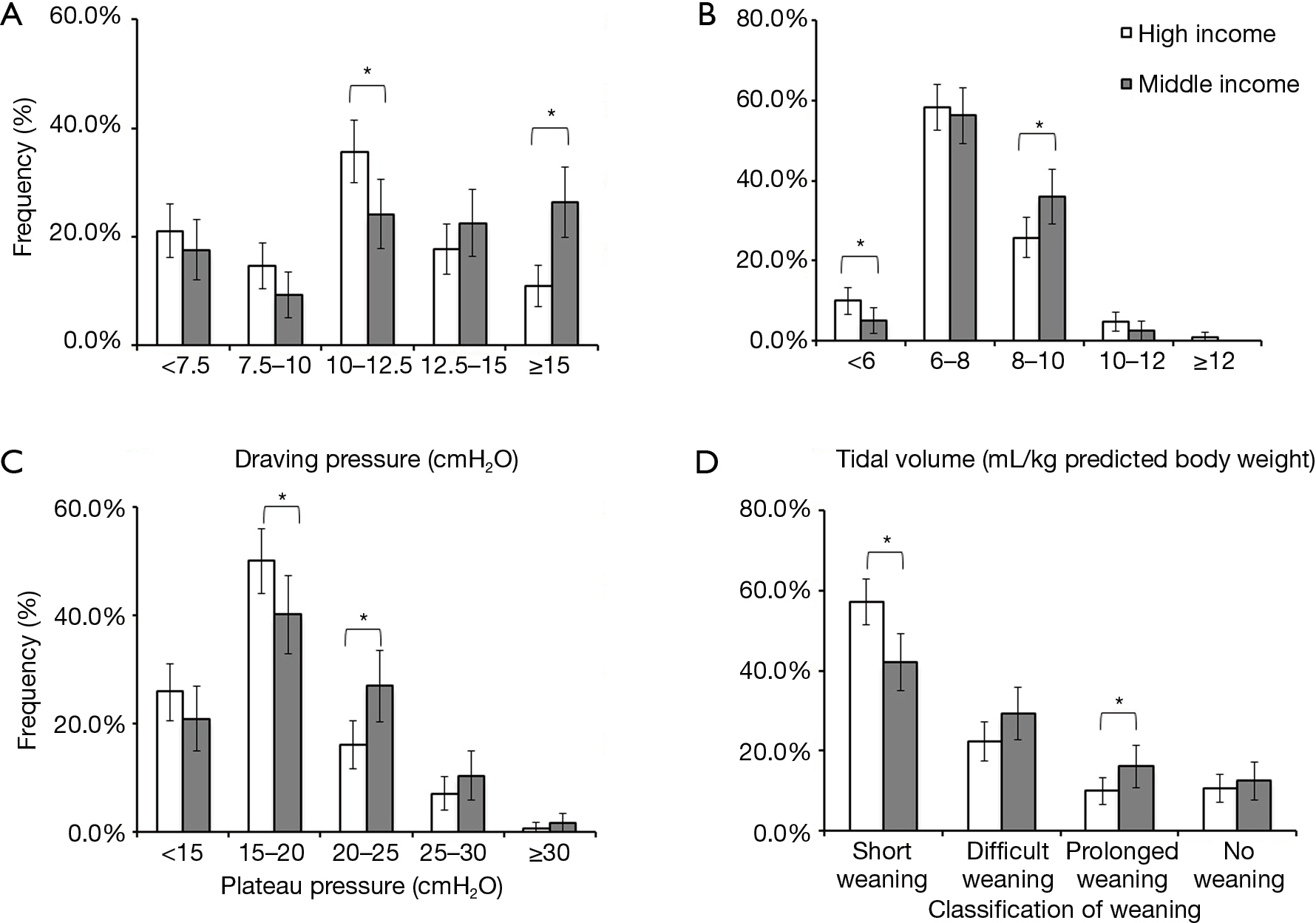 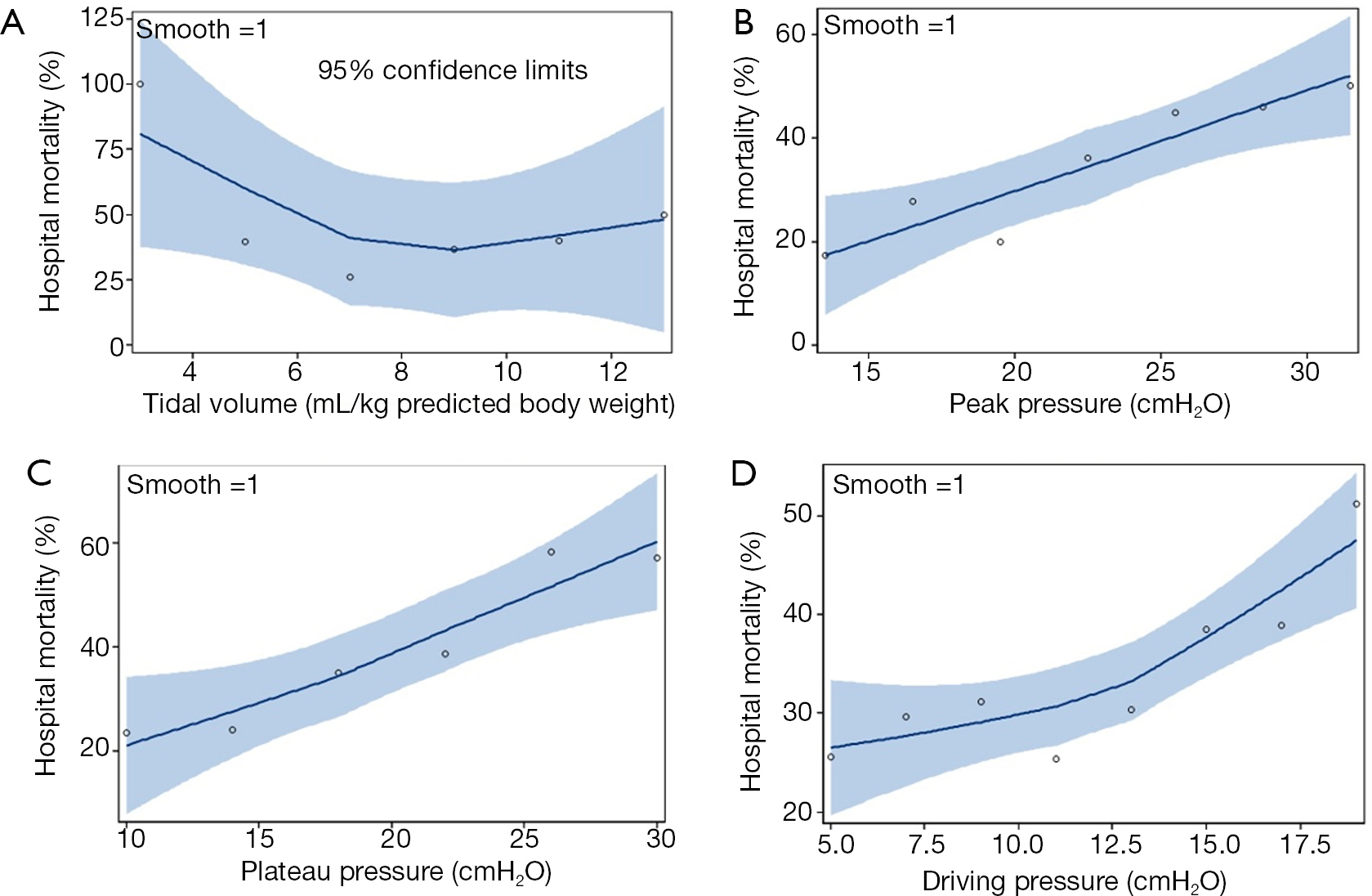 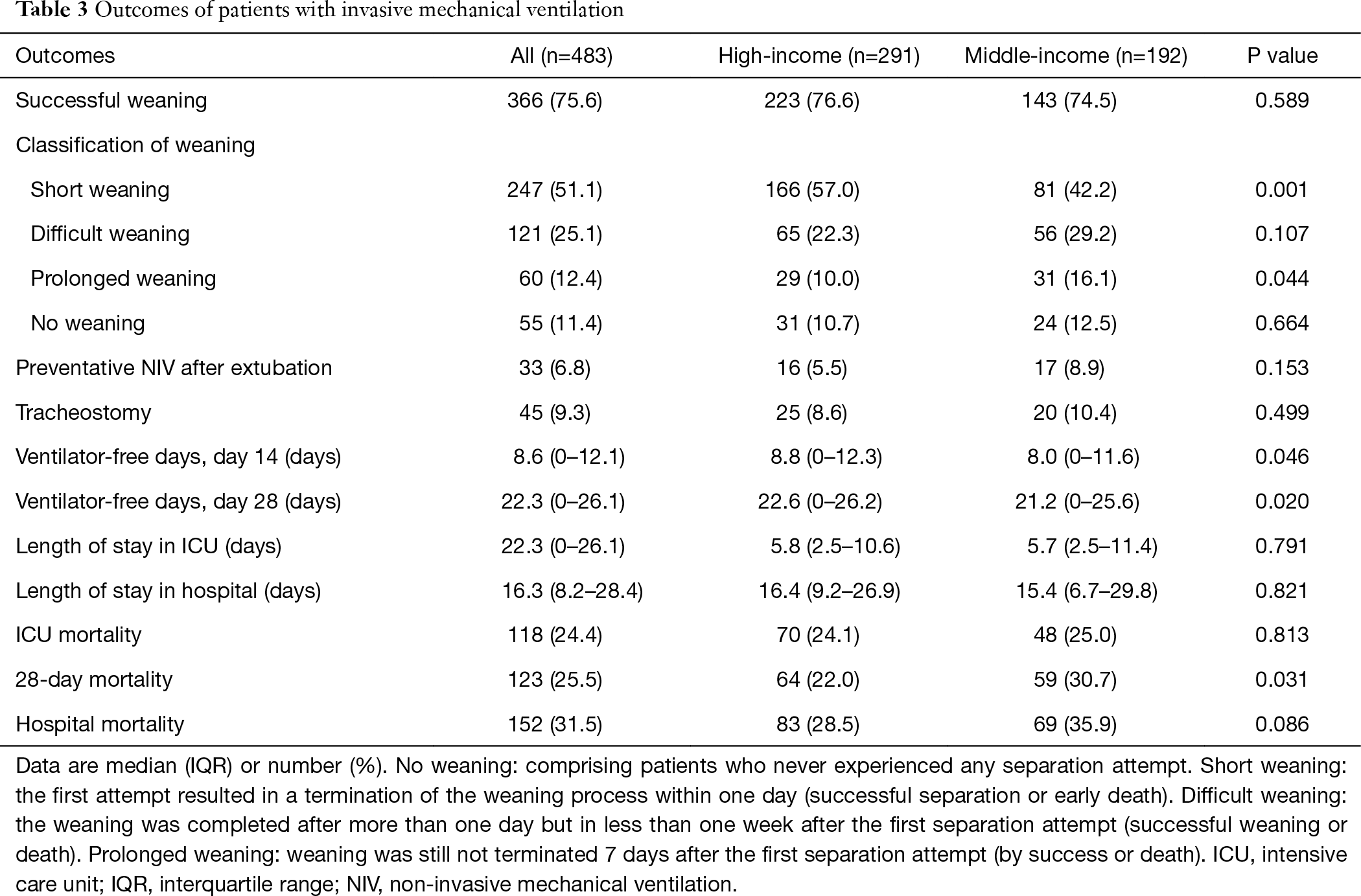 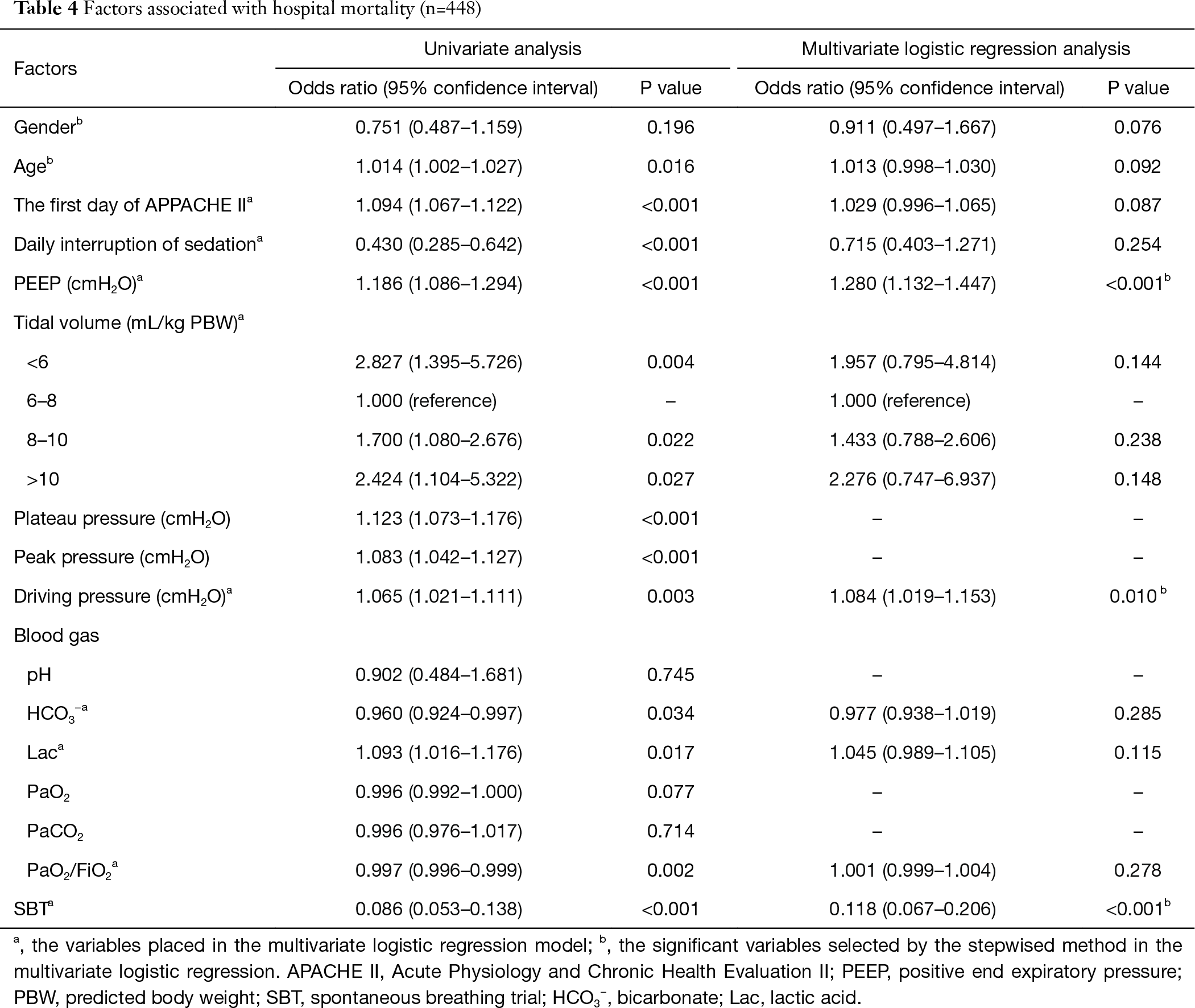 In this prospective cross-sectional study, we noted important differences in the management of MV and patient outcomes according to economic variation in China. Patients from high-income provinces had lower tidal volume, plateau and driving pressures; a higher proportion of receiving protective ventilation; shorter weaning; and better survival in the 28 days. This information will help to improve the management of MV, especially in middle-income provinces.

We found a somewhat lower proportion of mechanically ventilated patients in ICUs and hospital mortality in this study than in the global data. A system analysis of 18,302 patients from 927 ICUs showed a ventilation rate of 35% in ICU patients and a hospital mortality of 35% in 2010 (3). In the present study, 26.6% of patients received invasive MV and the hospital mortality was 28.5%. However, another survey by Du et al. showed a high invasive ventilation rate (68.8%) in patients admitted to 22 Chinese ICUs (11). The most likely explanation is the difference in enrolment criteria and participating ICUs between the two surveys. However, the initial APACHE II scores were comparable (19 vs. 18), which suggests that severity of illness might not be the main reason for the difference between the two Chinese surveys. We found a similar constituent ratio of the main reason for MV between this study and others (1-3), and postoperative respiratory support was the most common reason for invasive MV.

Since the main cause of MV was postoperative respiratory support in the present study, it was no surprise that patients received uniform physiological levels of PEEP in both groups. PEEP is an essential component of lung-protective ventilatory strategies not only in ARDS patients but also in other patients with MV. Observational studies have reported an independent association between zero PEEP and mortality in a heterogeneous cohort of mechanically ventilated patients (19). In the present study, we found that PEEP was an independent risk factor for hospital mortality. Although high PEEP may cause harm if not necessary, the negative correlation between PEEP and PaO2/FiO2 and the positive correlation between PEEP and the APACHE II score in the present study might suggest that patients with a severe disease and poor oxygenation are more likely to receive higher PEEP.

Analgesia, sedation and liberation from MV

With the exception of 55 (11.4%) patients who never experienced any separation attempt, we classified patients into short, difficult and prolonged weaning based on weaning duration according to the WIND study (10). Our data suggest that the three groups have different weaning outcomes and mortality. Consistent with previous reports, we found that most patients were in the short weaning group, and patients in the prolonged group had the worst survival in 28 days.

Analgesia and sedation are important components of care for the invasive mechanically ventilated patients in the ICU. It is vital to remember that protocols attempting to minimize sedation must first acknowledge the need for adequate pain control (28-30). Consistent with other studies (31,32), we found that only 59.8% of patients with MV received analgesic (no difference between high-income and middle-income groups). Measures to improve the insufficient application of analgesic should be taken in ICUs in China.

Our study has several limitations. First, our cohort is a convenience sample from 20 participating ICUs from nine provinces and therefore might not be representative of actual clinical practice in ICUs in China. Thus, our results could be biased, particularly where specific types of ICUs (e.g., academic ICUs) might be over-represented. Second, the research period (summer) was arbitrarily chosen, which could introduce bias when extrapolating the results to a whole year. However, another study showed that age, severity, the proportion of MV and mortality were not subject to seasonal effects (33). Third, because we only recorded the ventilator parameters during the early phase of MV, the present study was unable to show the graph of the entire MV process and comparison between groups. Fourth, it might not be appropriate to classify groups according to the high and middle incomes of each province in one county according to the 2012 World Bank country classification by GDP per capita. Fifth, inspiration occlusions were not used during the measurement of plateau pressure and driving pressure, and thus the absolute value of the plateau pressure and driving pressure might be slightly overestimated.

This prospective cross-sectional study showed important economic differences in the practice of MV and weaning and in patient outcomes in China. Higher income was associated with a higher proportion of protective ventilation, shorter weaning and better survival in patients with MV. These findings may serve as a current benchmark of the usual care and outcomes of patients with MV in provinces with different income levels in China. They may also indicate a potential for improvement in patient management.

Funding: This study was supported by The Ministry of Health of China (Special Fund for Health-Scientific Research in the Public Interest Program 201202011), the National Natural Science Foundation of China (81670074, 81870066), the Natural Science Foundation of Jiangsu Province (BK20171271), Jiangsu Provincial Medical Youth Talent (QNRC 2016807), and Third Level Talents of the “333 High Level Talents Training Project” in the fifth phase in Jiangsu (LGY2016051).

Ethical Statement: The authors are accountable for all aspects of the work in ensuring that questions related to the accuracy or integrity of any part of the work are appropriately investigated and resolved. The protocol was approved by the Institutional Ethics Committee of Zhongda Hospital (the core centre, Approval No. 2012ZD11KY09.0).