Pulmonary arteriovenous malformations (PAVMs) are abnormal direct communications between the pulmonary arteries and veins without interposition of a capillary bed (1,2). PAVMs are lack of specificity and relatively rare, which are sometimes misdiagnosed as other common cardiopulmonary problems (3,4).

A 22-year-old young man with a history of idiopathic dilated cardiomyopathy (IDC) was admitted to our hospital during the past 7 months. He presented with progressive dyspnea on exertion, palpitation, cough and cyanosis. He had a history of viral encephalitis, which presented with epilepsy 7 years ago. There was no personal of family history of hereditary haemorrhagic telangiectasia (HHT). At first admission, he was admitted to Department of Neurology due to epilepsy and syncope. While in hospital, he developed third-degree atrioventricular (AV) block and sudden cardiac arrest. Receiving cardiopulmonary resuscitation (CPR) and endotracheal intubation, he was transferred to the intensive care unit (ICU) for further treatment. Subsequently, he experienced cerebral infarction. After neurological recovery, he was transferred to the Department of Cardiology owing to intermittent third-degree AV block. Hemoglobin (HGB), pro-B-type natriuretic peptide (pro-BNP), and arterial blood gas analysis were almost normal. Echocardiography (UCG) revealed that moderate dilation of the left ventricle (LV) and severely decreased LV function with ejection fraction (EF) of 31% (Table 1). Thoracic X-ray did not show nodules (Figure 1A). Computed tomography (CT) of the thorax revealed right upper lobe pneumonia (Figure 1B). CT of the head revealed a right cerebral infarction. Coronary angiography showed normal coronary arteries. Excluding other common reasons resulting in heart failure, the patient was diagnosed with IDC, congestive heart failure, NYHA Class III-IV, intermittent third-degree AV block and acute cerebral infarction. He received permanent pacemaker implantation and his medications included aspirin, simvastatin, metoprolol, losartan, digoxin, and diuretic. Then, he was hospitalized due to recurrent dyspnea for four times which can be relieved by anti-heart failure therapy temporarily. With implanted pacemaker, his symptoms of epilepsy did not happen again. 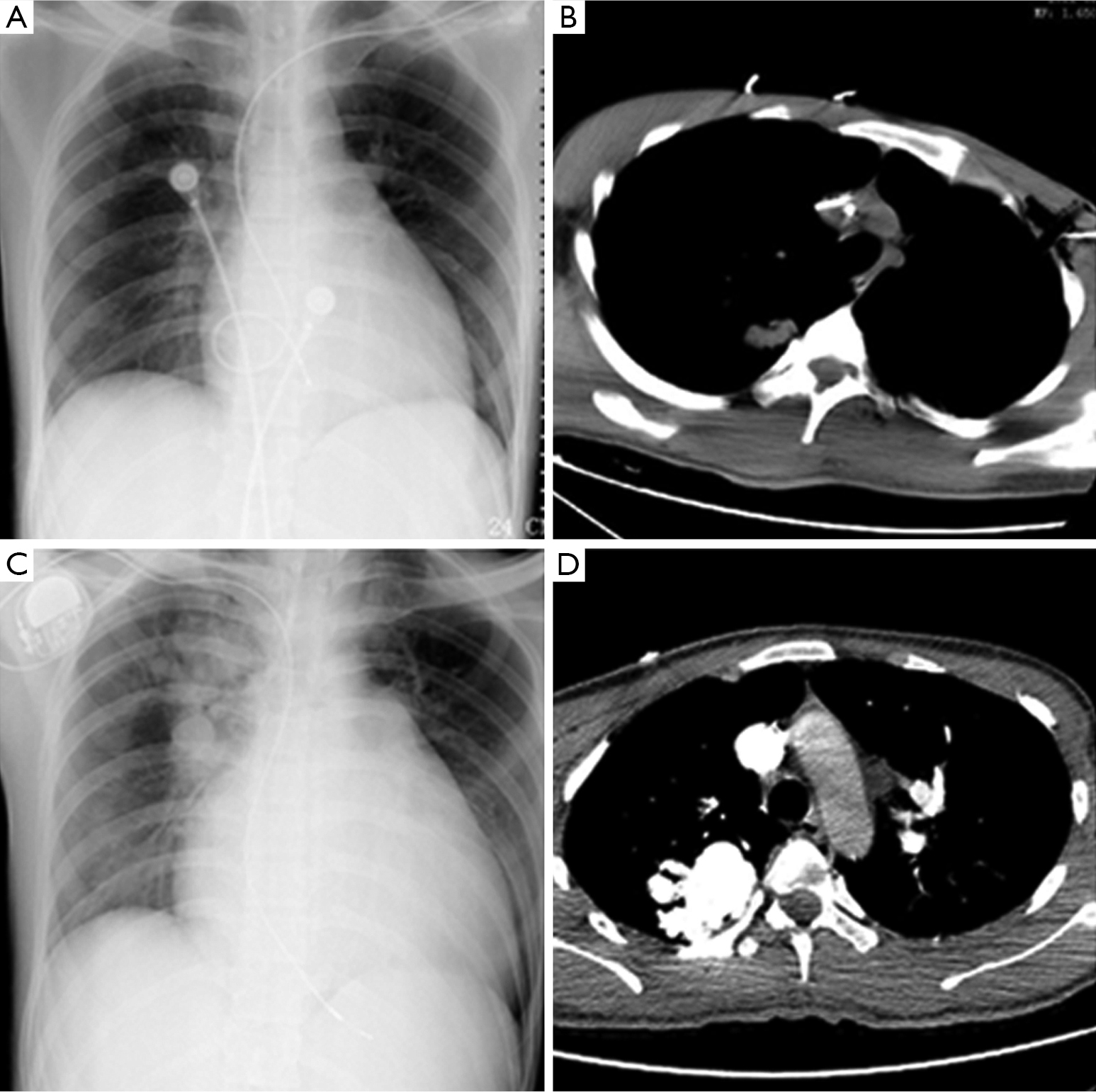 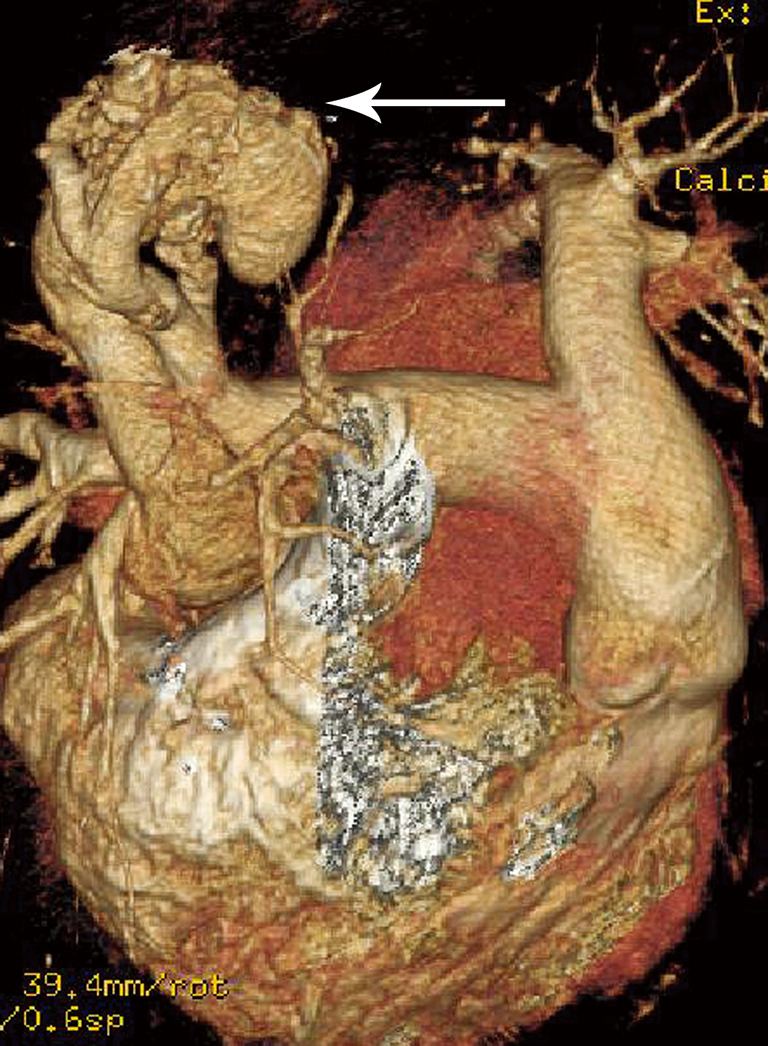 PAVMs are usually congenital in origin, but may be acquired in various conditions, such as hepatic cirrhosis, mitral stenosis, trauma, actinomycosis, schistosomiasis and other cancers (1,5,6). In congenital PAVMs, 70% of patients have a history of HHT. PAVMs are usually asymptomatic, but can cause dyspnea, chest pain, cough, and haemoptysis. Various neurological complications such as stroke, brain abscess and paradoxical embolism may occur. It is a remarkable fact that HHT is characterized by the development of multiple AVMS in the skin, mucous membranes, and/or visceral organs, e.g., epitaxis, telangiectasia, PAVMs, and liver AVMs. Sometimes, the two diseases may coexist (5). Contrast-enhanced UCG is useful in the assessment of PAVMs since it helps to distinguish between intracardiac and extracardiac shunts. Intracardiac shunts are characterized by the visualization of bubbles in the left heart chambers within 1-2 cardiac cycles after appearing in the right atrium. In patients with intrapulmonary shunts, this event occurs after a delay of 3-8 cardiac cycles (3). Indeed, CT angiography is a valuable tool in diagnosing and defining the vascular anatomy of PAVMs (5). Symptomatic PAVMs were treated surgically before, such as surgical ligation, segmentectomy, lobectomy and pneumonectomy (7-9). Nowadays transcatheter embolization is recognized to be more efficacious and safe, such as embolic agents, stainless steel embolization coils, mini-balloons, or Amplatzer vascular Plug II (10,11).

There are some points to be considered. Firstly, this patient with a history of IDC was admitted to hospital with recurrent dyspnea. UCG showed dilated LV with decreased function. He can be temporarily relieved by anti-heart failure therapy, but was repeatedly hospitalized due to recurrent attacks of dyspnea. The diagnosis of IDC must be reviewed once symptoms cannot be improved. Secondly, at first hospitalization, HGB, BNP and arterial blood gas analysis did not reveal any abnormality. X-ray did not show nodules. CT revealed right upper lobe pneumonia, which should relate to endotracheal intubation at that time. During treatment, HGB and BNP gradually increased with blood oxygen declining. At the fourth time, X-ray revealed nodules, but we did not pay attention yet. Seven months later, the pneumonia was confirmed as PAVMs by CT angiography. We believed that clinical symptoms and signs of PAVMs were absent initial. The PAVMs have a natural tendency to increase in size over time owing intrinsic and extrinsic factor, which caused recurrent dyspnea ultimately. Various factors including stress, hypoxemia, and also pulmonary arterial hypertension (PAH) may explain this phenomenon (5,6). Thirdly, the patient suffered from cerebral infarction, which was believed to relate to thromboembolia after CPR initial. Combining with the history, stroke may be responsible for a right-to-left shunt leading to paradoxical embolism. Fourthly, it is difficult to explain why the patient presented with third-degree AV block. We speculated that the patient might present with myocarditis, AV block and Adams attack7 years ago. Unfortunately, he was misdiagnosed as epilepsy and viral encephalitis, because the symptoms of “epilepsy” disappeared after the pacemaker implantation.

The last, heart failure secondary to the hyperdynamic circulatory situation caused by AVMs is a well-known clinical entity. Cho et al. (12) described unusual cases in which HHT patients presented with high-output heart failure, which usually caused by shunting of blood through AVMs in the liver. In order to supply blood to vital organs, cardiac output is increased with elevated stroke volume and heart rate, leading to high out-put heart failure (12,13). Besides the influence of PAVM, We supposed high-output failure may be another explanation for dyspnea. But it was a pity that the CT angiography of the liver did not obtain.

Even though PAVMs are rare anomalies, they should be considered in the differential diagnosis of cardiopulmonary disorders. The diagnosis of IDC requires excluding other diseases carefully, especially in cases not responding to anti-heart failure therapy.

This study was approved by the Ethics Committee of the Longyan First Hospital, Fujian Medical University.