Validation of the 8th edition of the TNM staging system in 3,950 patients with surgically resected non-small cell lung cancer

Despite the recent advances in diagnosis and treatment, lung cancer is the most frequent cause of cancer-related deaths in both men and women worldwide (1). Accurate staging of lung cancer is essential for predicting prognosis and selecting appropriate treatment; as such, the TNM staging system for lung cancer was significantly modified in its 8th edition (2), which was authorized by the American Joint Committee on Cancer (AJCC) on January 1, 2018.

The 8th edition of the TNM system was developed on the basis of extensive investigations by the International Association for the Study of Lung Cancer (IASLC), including the analysis of an international database of 94,708 patients from 46 sites from 19 countries (3). However, the database has some limitations in that a majority of the patients (76.9%) were from two countries (Japan and Denmark) and that the database lacked information on tumor recurrence. In addition, the database consisted of dichotomized patients classified by different LN maps—Naruke-Japanese (4) or Mountain-Dresler modification of the American Thoracic Society (MD-ATS) (5)—and the corresponding analysis was performed without statistical correction (6). Therefore, the IASLC carried out an external validation using the National Cancer Database and showed that the 8th edition had similar discrimination ability (7). Nevertheless, a further robust external validation using a large independent data set from an institution with standardized protocols should be carried out.

As the largest tertiary referral center in Korea, Asan Medical Center has maintained a nearly 100% completion rate for postoperative follow-up and less than 1% surgical mortality in the last decade. In this study, we validated the 8th edition of the TNM staging system by using the prospectively collected lung cancer database from our institution, and compared the discrimination values of the 7th and the 8th editions with respect to the overall survival (OS) and recurrence-free survival (RFS).

The clinical records of patients who underwent surgery for non-small cell lung cancer (NSCLC) were retrospectively collected between January 2006 and December 2015 in the thoracic surgery department of Asan Medical Center in Seoul, South Korea. Of these patients (n=6,584), the following patients were excluded: patients with other concurrent malignancies (n=744); patients who underwent sublobar resection (biopsy, wedge resection, and segmentectomy), incomplete resection (R1 and R2 resection) or incomplete lymph nodal dissection (number of resected lymph nodes <6) (n=1,049); patients who received preoperative chemoradiation therapy (n=201); patients who had histology other than adenocarcinoma, squamous cell carcinoma or adenosquamous cell carcinoma (n=271); patients whose stages were higher than IIIB according to the 7th edition (n=306) and/or who died within 30 days after surgery (n=63) (Figure 1). Consequently, 3,950 patients who underwent complete resection with systematic lymph node dissection were included. This study was approved by the Asan Medical Center Ethics Committee/Review Board (2019-0544). 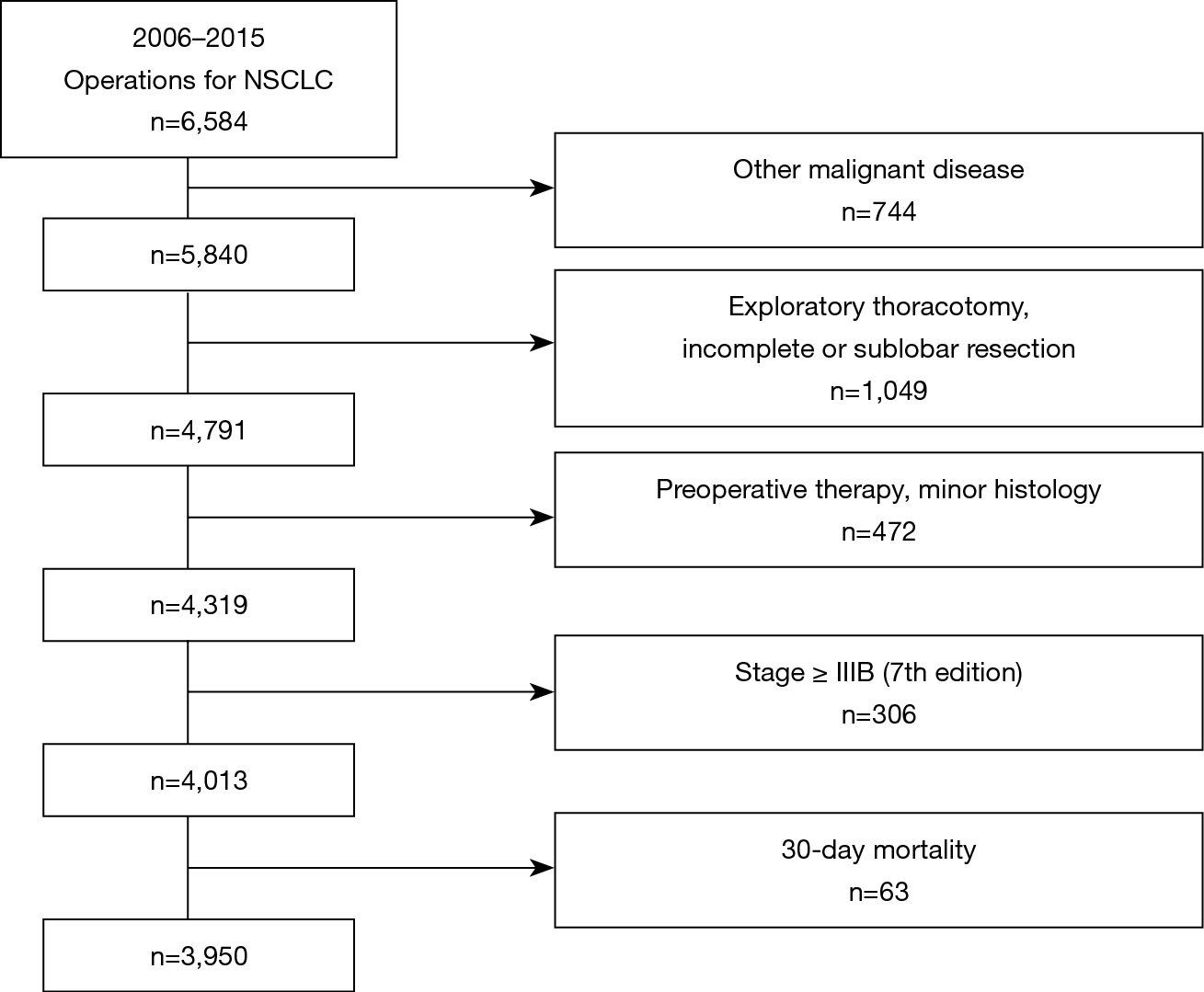 The patients were pathologically staged according to the 8th edition in a retrospective manner (2). Adjuvant chemotherapy was used in patients with the 7th edition ≥ IIA and some with high-risk stage IB (lymphovascular invasion, visceral pleural involvement, large tumor size). Systemic chemotherapy with a platinum-based regimen was planned for four to six weeks after surgery, with a total of four courses of treatment. Follow-up information on all patients was obtained through clinic follow-up notes every 6 months during the first 5 years after surgery and every year thereafter. Chest CT scans were performed in sync with clinical visits or at any time when disease recurrence was clinically suspected. Treatment modalities and chemotherapeutic regimens in relapsed cases were determined at the discretion of the attending physician.

Continuous variables are presented as medians and interquartile ranges, and categorical variables as percentages. Survival curves of OS and RFS according to the 7th and the 8th editions were estimated using Kaplan-Meier survival analysis and assessed using the log-rank test. Cox proportional hazards model was used for univariate and multivariate analysis to identify prognostic factors of OS and RFS. Selection of the final multivariate model was processed with a stepwise model selection approach (P ≤0.1 for entering the model and P ≤0.05 for staying in the model). Cox proportional hazard analysis was also used to adjust for covariate variables and to calculate hazard ratios (HR) between adjacent TNM staging groupings. Before comparing the discrimination ability, we selected the final model for 7th and 8th editions by using multivariate analysis. Age, sex, and staging groupings were included in the final model for OS, whereas age, histology, history of adjuvant therapy, and staging groupings were included in the final model for RFS. The prognostic values of the two final multivariate models were calculated with the Akaike Information Criterion (AIC) (8) and the R2 measure (9), and the Concordance index (C-index) (10) was used in the two models to determine the discriminatory power.

Clinicopathologic characteristics of the patients are summarized in Table 1. The median follow-up period was 59 months (interquartile range, 38–88 months). Lobectomy was performed in 3,663 patients (92.7%), and video-assisted thoracoscopic surgery was performed in 2,427 patients (61.4%). A total of 2,858 (72.4%) patients received adjuvant therapy, including chemotherapy, radiotherapy, or concurrent chemoradiation therapy.

Analysis of OS and RFS

Survival curves of OS and RFS following the 7th and 8th editions are shown, along with median survival time and 5-year survival rates (Figures 2,3). The OS curves stratified by the 7th edition showed a stepwise deterioration from stage IA to stage IIIA (Figure 2A). A phased degradation was also found within the RFS curves, except that the curves of stage IIA and IIB were not significantly different (P=0.101) (Figure 2B). According to the 8th edition, survival curves of OS and RFS displayed sequential deteriorations, but did not show significant differences between stages IIA and IIB (P=0.172 for OS and P=0.144 for RFS) (Figure 3). 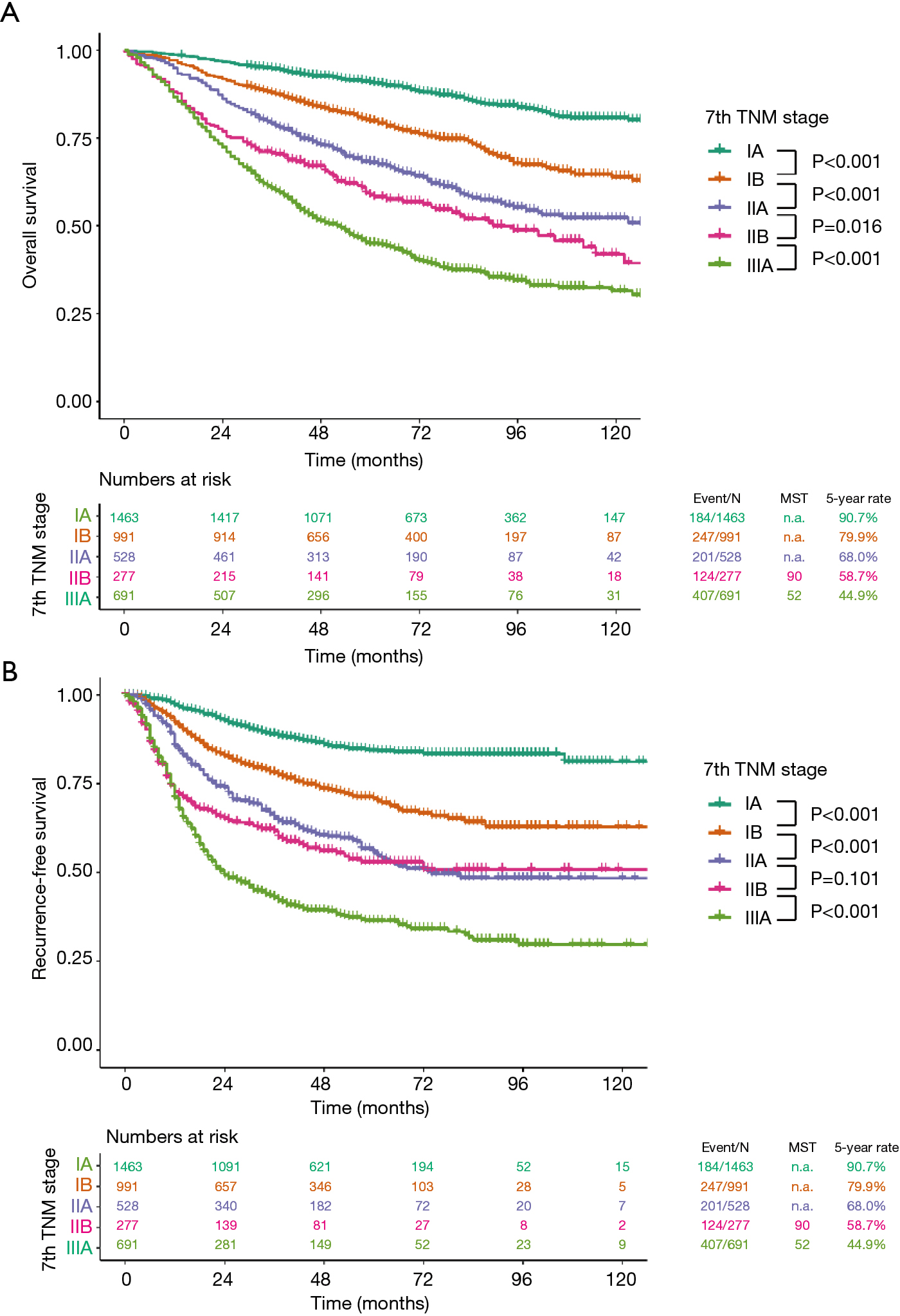 Figure 2 Survival curves of OS (A) and RFS (B) based on the 7th edition of the TNM staging system. OS, overall survival; RFS, recurrence-free survival; TNM, tumor, node, and metastasis; n.a., not applicable. 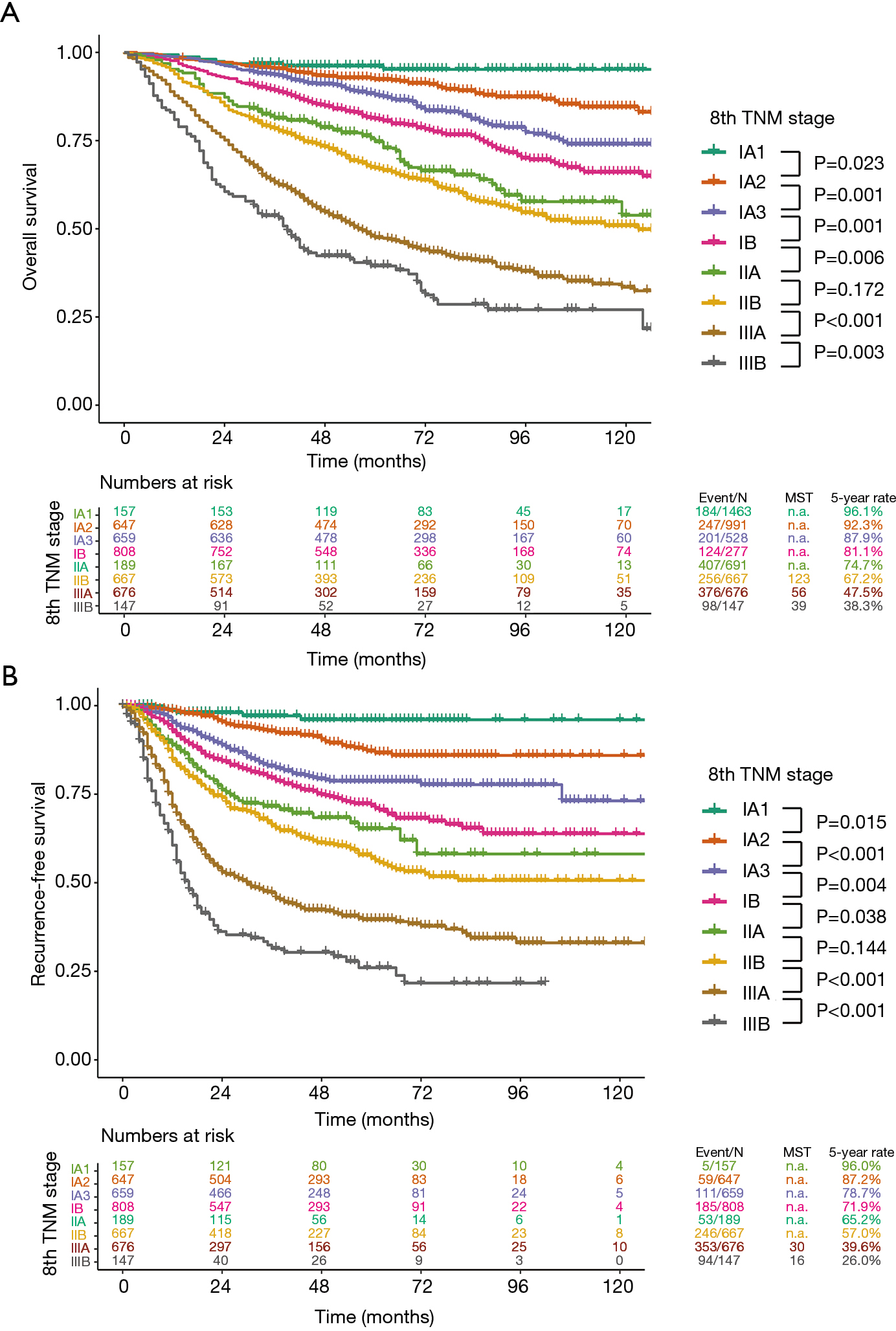 Figure 3 Survival curves of OS (A) and RFS (B) according to the 8th edition of the TNM staging system. OS, overall survival; RFS, recurrence-free survival; TNM, tumor, node, and metastasis; n.a., not applicable.

According to Cox proportional hazard analysis, all HRs between adjacent staging groups were higher than 1.0, indicating gradual deterioration of prognosis according to the staging groups (Table 3). However, a significant difference was not observed between stages IIA and IIB in the 8th edition for OS and in both the 7th and the 8th editions for RFS, which is in line with the results from the Kaplan-Meier analysis.

The TNM staging system for malignant tumors is a globally accepted protocol for classifying the degree of tumor extent and invasion, thereby providing accurate prognosis and suggesting the appropriate treatment stratification (11). Several editions of the TNM staging system for lung cancer have been published following its introduction in 1973 (12); the latest update in 2017 introduced the 8th edition for lung cancer (2), which provided several new categories, especially in the T and M descriptors. As for the T descriptor, T1 and T2 were subdivided into T1a, T1b, T1c, T2a, and T2b by size in 1-cm increments. In addition, tumors larger than 5 and 7 cm were reclassified as T3 and T4, respectively. Tumors causing partial or total lung atelectasis and those involving main stem bronchus regardless of distance from the carina were reclassified as T2. Diaphragm invasion was reclassified as T4 and mediastinal pleural invasion was removed from the T descriptor (13). As for the M descriptor, tumors with extrathoracic metastases were subdivided into M1b involving single distant sites and M1c involving multiple distant sites (14). No changes were recommended for the N descriptor (6). In the new stage grouping, significant changes included subdivision of stage IA into IA1 (T1aN0), IA2 (T1bN0), and IA3 (T1cN0), and introduction of the new IIIC stage representing T3N3 and T4N3 tumors (15).

In our study, the curves of OS and RFS for each stage grouping showed a gradual deterioration (Figures 2,3). However, in both the 7th and 8th editions, there were no significant differences between the IIA and IIB groups, which remained the same on Cox analysis adjusted with multiple covariates (Table 3). These findings are in line with those from previous studies that validated the 7th edition (16,17) and the 8th edition (18). It is obvious that the absolute values of difference between stage IIA and IIB are not as large as those between other groups. However, relatively low proportions of patients in the 7th edition stage IIB (277/3,950, 7.0%) and the 8th edition stage IIA (189/3,950, 4.8%) also affected these results. In terms of the 7th edition, a small proportion of IIB patients was consistently reported in other external validation studies after the introduction of the 7th stage system (16,17). According to the definition of the 8th edition, almost all patients in the 7th edition stage IIA were restaged to 8th edition stage IIB; moreover, the percentage of stage IIA patients whose tumor size ranged from 4 to 5 cm without lymph node invasion was reduced to 4.8%. Therefore, comparison between the groups with a relatively small difference and a low percentage of patients may be responsible for the insignificant P values.

In our current study, we conducted a retrospective analysis in a large cohort from a single institution in order to determine whether the newly introduced 8th edition of the TNM classification system for NSCLC is a better prognosticator of OS and RFS than the previous 7th edition. Judging from the results adjusted through multivariate Cox analysis, the 8th edition seems to have better prognostic power (higher C-index) for OS and RFS. Considering that the discriminative value becomes higher as the number of prediction variables in a certain model increases (19), this result may be attributed to the subdivision of 7th edition stage IA tumors into 8th edition stages IA1, IA2, and IA3. However, even after applying the AIC and R2 methods that adjust their predictive value by penalizing the number of increased variables (20), the 8th edition still showed better prognostic ability (lower AIC and higher R2). Consequently, subdividing the 7th edition stage IA patients into three groups (IA1, IA2, and IA3) is a statistically appropriate modification, and the 8th edition is superior in terms of stratification of prognosis for OS and RFS. Proper migration of stage in patients in the 7th edition stages IB, IIB, and IIIA may also contribute to improved discrimination ability of the 8th edition (Table 5).

Our study utilized a large independent database, and none of the patients were included in the IASLC database. However, our results are limited in generalizability due to the retrospective nature of the study design and the use of observational data from a single institution. Also, because all reviewed data were collected only from patients undergoing surgical treatment, the survival curves might not reflect those of the general NSCLC patient population.

We demonstrate that stratification according to the 8th edition of the TNM staging system is prognostically valid for patients who underwent complete resection of NSCLC. The discrimination ability of the 8th edition was superior to the 7th edition in terms of OS and RFS.

Ethical Statement: The authors are accountable for all aspects of the work in ensuring that questions related to the accuracy or integrity of any part of the work are appropriately investigated and resolved. This study was approved by the Asan Medical Center Ethics Committee/Review Board (2019-0544) and written informed consent was obtained from all patients.