Since McKeown first described his esophagectomy in 1978 (1), this three-field surgery has been widely applied in clinical practice, and particularly gained momentum when the “minimally invasive era” began in the early 1990s (2). This procedure is now the mainstream esophagectomy pattern for esophageal cancer [over 90% of total procedures (3)] because (I) it can achieve en bloc resection of both thoracic and gastric lymph nodes, and (II) the cervical anastomotic leaks can be opened and drained very conveniently (4). However, the entirety of the McKeown esophagectomy procedure is still challenging for some surgeons due to its long surgical duration (~480 minutes), complicated surgical steps, and relatively high anastomotic leak rate (5). Here, we present a case of minimally invasive McKeown esophagectomy with en bloc lymph node dissection and manual anastomosis for a male with squamous cell carcinoma in the inferior esophagus.

The patient was a 46-year-old man who presented with swallowing discomfort for one month. The endoscope showed an ulcerative lesion 38–41 cm from the incisor, and there was iodine staining positive foci 28 to 32 cm from the incisor. Chest and abdominal CT scan showed no significant enlarged lymph nodes in the mediastinum except for a few small lymph nodes in the bilateral recurrent nerve areas (Figure 1). Biopsy was squamous cell carcinoma. Since there were several iodine staining positive foci in the mid esophagus (28–32 cm) in addition to the main lesion at 38–41 cm, and no enlarged cervical lymph nodes, we decided to perform a thoraco-laparoscope-assisted McKeown esophagectomy with two-field lymph node dissection (Figure 2). 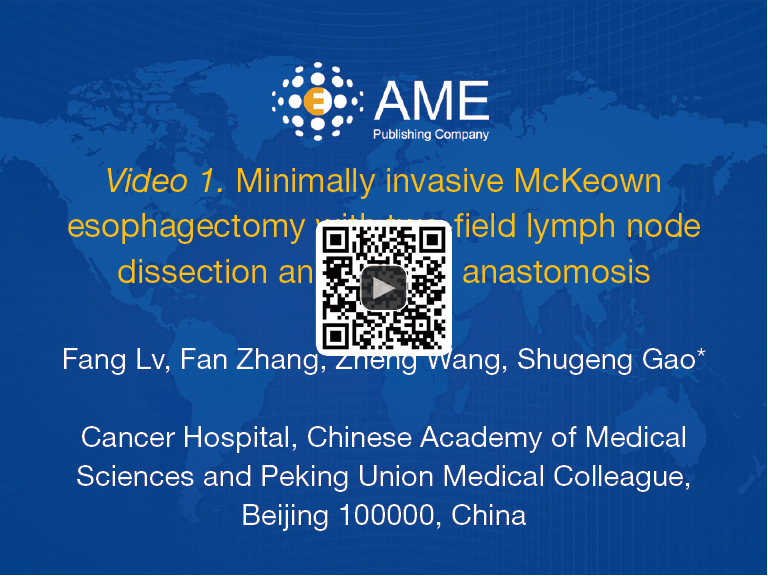 The right vagus nerve was exposed after opening the parietal pleura above the azygos arch beside the superior vena cava. Blunt dissection was used to search for the branching point of the recurrent laryngeal nerve (RLN) to remove the surrounding lymph nodes (Figure 3). Next, the azygos vein arch was separated, overhung on the adjacent parietal pleura with a hemo-lock clamp and cut off (Figure 4). Lymph nodes in the posterior area of the azygos vein arch were sequentially dissected (Figure 5). After the mid and inferior areas of the esophagus were isolated, we started to separate the left RLN. First, we pushed the trachea aside, and the lymph nodes at the origin area of the left RLN were removed (Figure 6). The left RLN was gradually isolated and the adjacent lymph nodes were dissected (Figure 7). The thoracic phase of the surgery ended with the dissection of the subcarinal lymph nodes. Finally, the esophagus was cut at the top of the thorax. 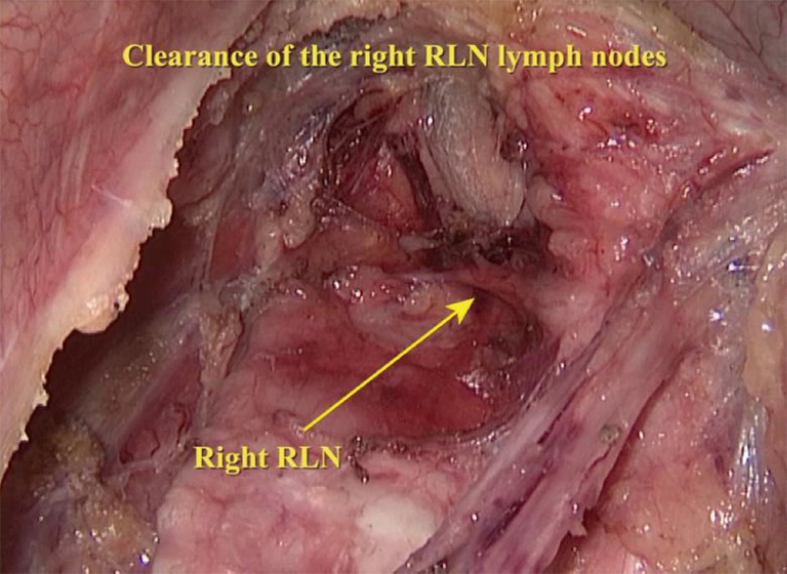 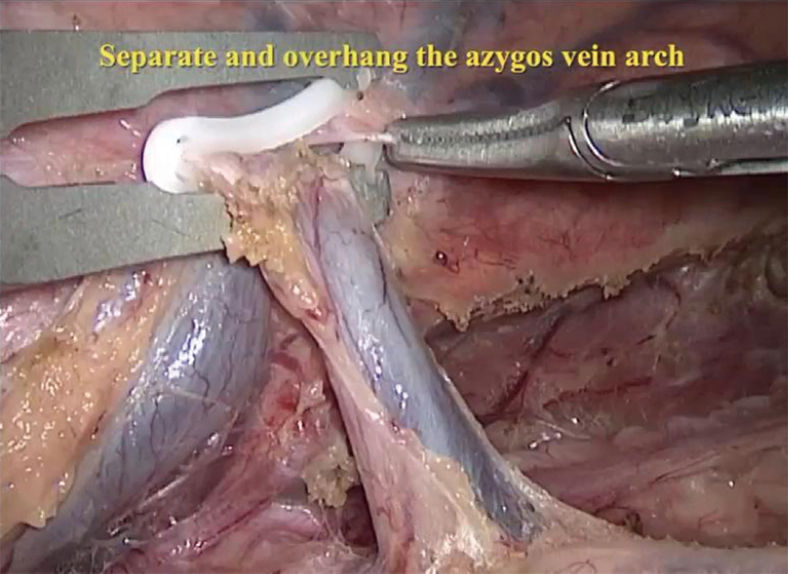 Figure 4 Separation and overhang of the azygos vein arch. 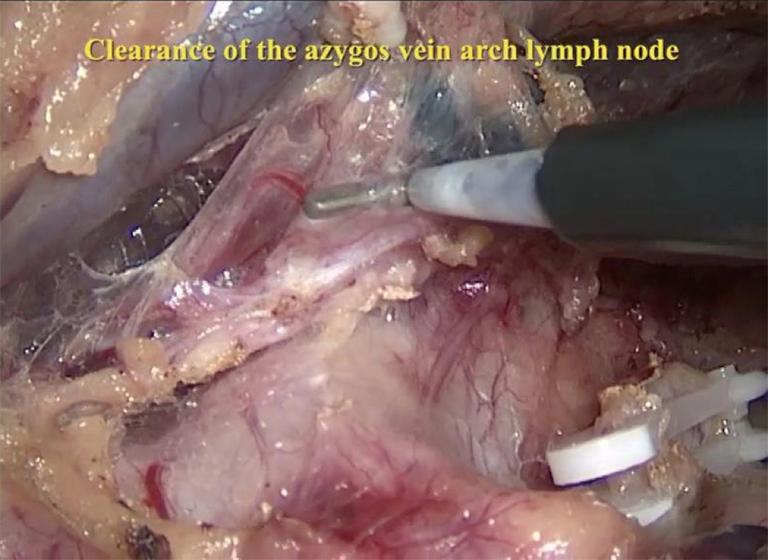 Figure 5 Dissection of the lymph nodes in the posterior area of the azygos vein arch. 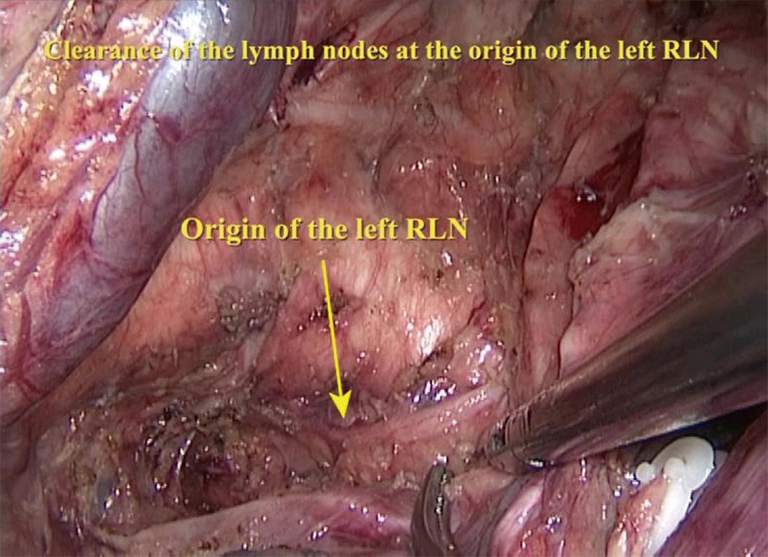 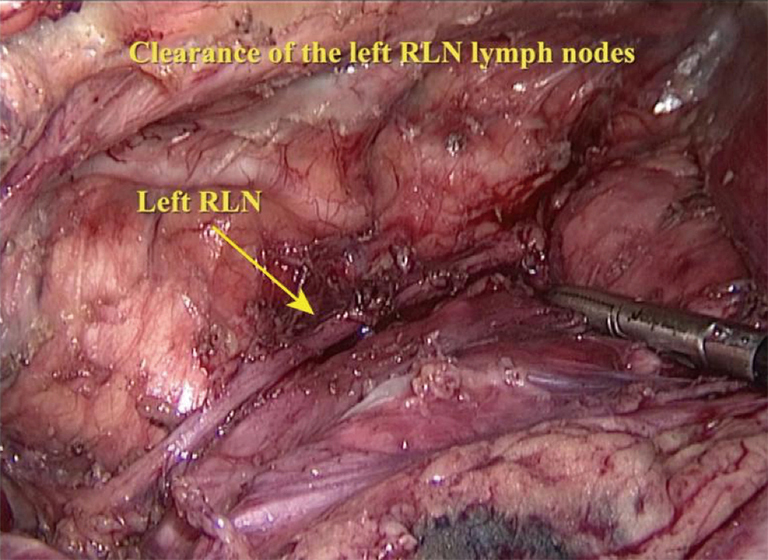 The second step was the isolation of the stomach. The patient was set in a supine position. Five Trocars were injected into the abdomen: an observation port beside the umbilicus, and two operating ports in each side of the abdominal wall. The hepatogastric ligament was cut first to expose the left gastric artery (Figure 8). The left gastric artery was clamped with three hemo-lock clamps and cut off, and the stomach was separated along the greater curvature from the spleen. Then, a small incision (6 cm) was made right below the xiphoid, the stomach was pulled out, and a gastric tube was made using staplers (Figure 9). Double-layer suturing for reinforcement of the gastric conduit was performed to make sure no bleeding occurred, and the gastric surface was made completely smooth to prevent scrapes when pulling the gastric tube from the thorax (Figure 10). 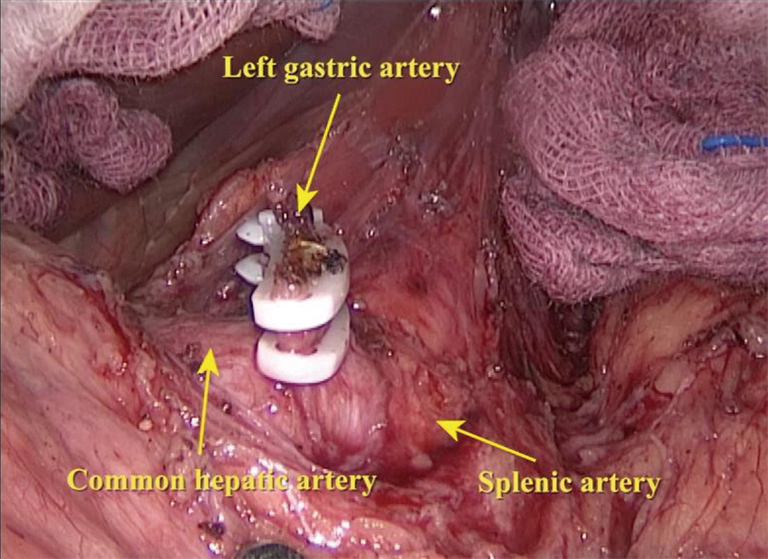 Figure 8 Isolation and cut-off of the left gastric artery. 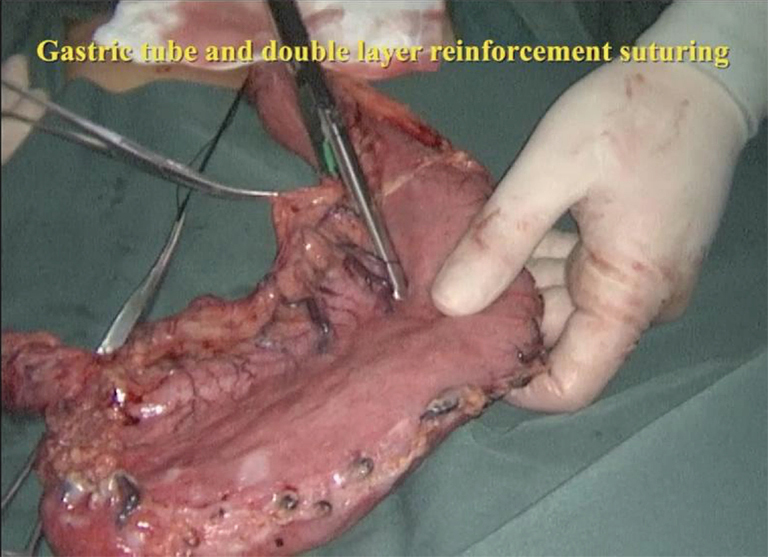 The final phase was the cervical anastomosis. A 5-cm incision was made on the left side of the neck. The platysma was separated, and the esophageal cuff and gastric tube were pulled out. Next, hand-sewn end-to-side anastomosis was performed. The mucosal and serosal layers were sewn separately (Figure 11).

Figure 11 End-to-side mucosal and serosal anastomosis of the gastric conduit and the esophageal cuff.

Thoraco-laparoscope-assisted McKeown esophagectomy has become more and more popular in China due to the advantages of a minimal invasive approach and the fast-track recovery it brings to patients. In this case, we performed thoracic and abdominal two-field lymph node dissection, since the preoperative CT scan did not show many lymph nodes in the mediastinum. Three-field lymphadenectomy for esophagectomy is still controversial. For para-RLN lymph node negative cases, cervical lymph node dissection can be omitted (4). In our center, there is an ongoing clinical trial for this scenario. Another characteristic of this surgery is double-layer hand-sewn anastomosis, which is believed to give less tension to the anastomotic site and is thus more compliant with the physiological status.

Based on the author’s experience, the whole procedure can be conducted smoothly after 10 to 15 cases. Patience and carefulness are the two critical traits needed by a surgeon to perform McKeown’s esophagectomy: do not be daunted by the large number of steps.

Conflicts of Interest: This video was granted the Award of Best Demonstration in the 2017 AME-Medtronic Minimally Invasive Esophageal Surgery Video Contest.