Are there any ethnic differences in the efficacy and safety of immune checkpoint inhibitors for treatment of lung cancer?

Immunotherapy, or immune checkpoint inhibitor, augments the host immune response to recognize and destroy cancer cells, and plays an important role as a treatment modality for patients with non-small cell lung cancer (NSCLC) (1). Since their first approval for NSCLC in 2015, four immunotherapeutic agents are currently available; nivolumab, pembrolizumab, atezolizumab and (as a consolidative agent) durvalumab (1). However, to date, no study has performed a direct head-to-head comparison regarding the efficacy and safety of immunotherapy between Asian and Caucasian lung cancer patients. In this review, we will focus on ethnic differences in clinical outcomes for immune checkpoint inhibitors in patients with NSCLC.

Nivolumab was the first immune checkpoint inhibitor approved for the treatment of advanced NSCLC (2). CheckMate 057 evaluated the efficacy of nivolumab versus docetaxel for non-squamous NSCLC patients who progressed during or after platinum-based doublet chemotherapy (3). For patients treated with nivolumab, the median overall survival (OS) was 12.2 months (vs. 9.4 months in docetaxel) and the median progression-free survival (PFS) was 2.3 months (vs. 4.2 months). Although the median PFS was numerically shorter, the crossing of curves was noted; the PFS rate at 1 year was 19% with nivolumab, compared to 8% with docetaxel. CheckMate 017 was another landmark study that demonstrated the superior efficacy of nivolumab over docetaxel for advanced squamous NSCLC patients who have progressed during or after first-line chemotherapy (4). The median OS and PFS were 9.2 (vs. 6.0 months for docetaxel) and 3.5 (vs. 2.8 months) months, respectively.

However, in subgroup analysis, CheckMate 057 data showed an unfavorable hazard ratio for OS in the rest-of-the-world geographic region, which included South America, Australia and Asia. Although the OS hazard ratio for overall population favored nivolumab (0.75; 95% CI, 0.62–0.91), the OS hazard ratio for the rest-of-the-world region favored docetaxel (1.49; 95% CI, 0.91–2.45). Given that less than 5% of the patient population was Asian in this study, the interpretation of these results with respect to the Asian patient group is limited. CheckMate 017 did not provide a subgroup analysis for Asians.

A comprehensive evaluation for the efficacy of nivolumab in larger Asian population has since been conducted. JapicCTI-130273 was a multicenter, phase II study of nivolumab in Japanese patients with advanced NSCLC who progressed after platinum-containing chemotherapy (Table 1). The results reported comparable outcomes to previous studies; ORR 22.4% and median PFS 2.8 months. The median OS was considerably longer at 17.1 months (5). Another phase II study conducted in Korea, with similar inclusion criteria, reported ORR of 20.0%, median OS of 13.9 months, and median PFS of 2.8 months (6). Phase III data from Chinese patients with advanced NSCLC who progressed during or after platinum-based chemotherapy also indicated favorable outcomes; ORR 16.6%, OS 12.0 months, and PFS 2.8 months (7). 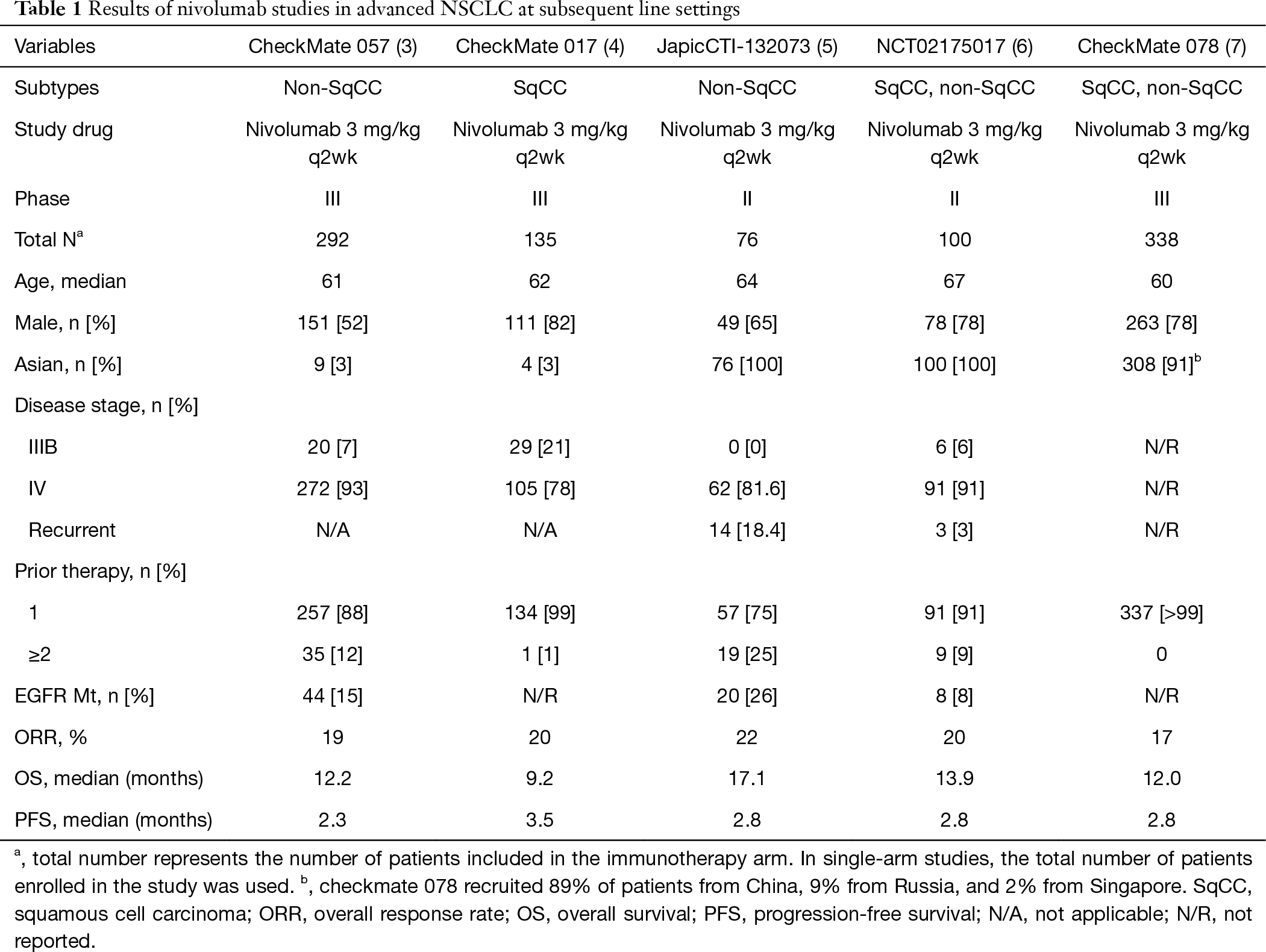 Pembrolizumab is another anti-PD-1 antibody that is approved and widely used in advanced NSCLC (Table 2). KEYNOTE-010, one of its first clinical trials, demonstrated the superior efficacy of pembrolizumab compared with docetaxel in previously treated patients; an ORR of 18% (vs. 9% for docetaxel), a median OS of 10.4 months (vs. 8.5 months), and PFS of 3.9 months (vs. 4.0 months) (8). Although KEYNOTE-010 included a higher proportion of Asian patients (21%) compared with CheckMate 057 or CheckMate 017 (3–4%), subgroup analysis was not provided for Asian patients. 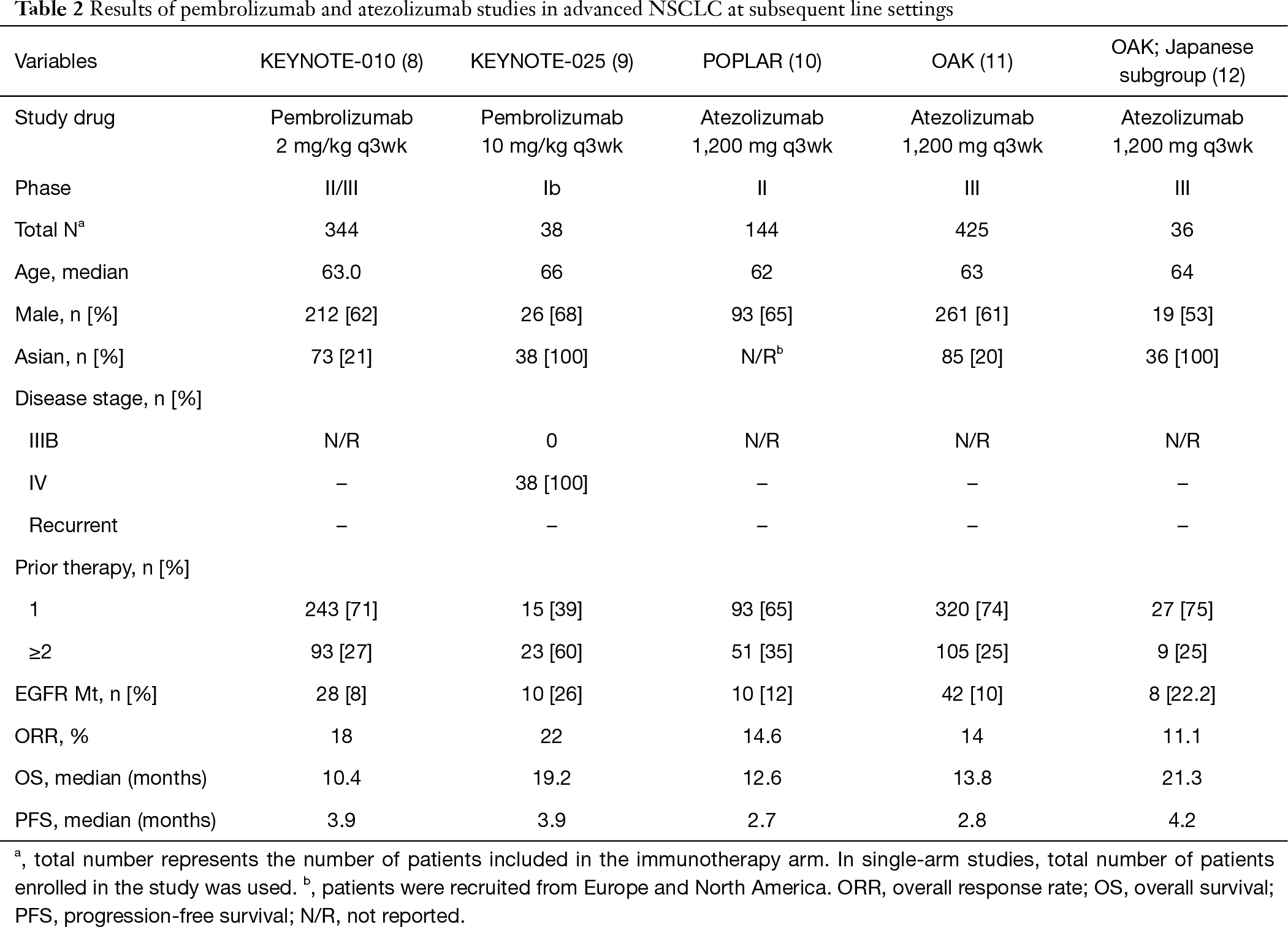 KEYNOTE-025 is a phase Ib study that was conducted solely in Japan, that enrolled patients with advanced NSCLC who received prior platinum-based doublet chemotherapy (9). This study has its limitations; it is an early phase trial with a small number of patients enrolled, and a higher pembrolizumab dose was used than is currently approved (10 mg/kg). Nevertheless, the results still illustrated an outcome consistent with that of KEYNOTE-010; ORR 22%, median OS 19.2 months, and median PFS 4.1 months.

Together, these results indicate that the relatively poor hazard ratio for OS in the rest-of-the-world region in the CheckMate 057 study might be attributable to the small number of Asian patients recruited. Many prospective clinical trials conducted in Asia have provided comparable outcomes with those from previous studies conducted predominantly in Western countries, verifying that immune checkpoint inhibitors are viable therapeutic option for both Caucasian and Asian patients with advanced NSCLC at subsequent line settings.

Atezolizumab, the only anti-PD-L1 antibody recommended for subsequent therapy, has proven its superior efficacy over docetaxel in the POPLAR and OAK studies (10,11). The OAK study, which recruited stage IIIB or IV NSCLC patients who received one or two previous cytotoxic chemotherapy, demonstrated an ORR of 14%, a median OS of 13.8 months (vs. 9.6 months for docetaxel) and a median PFS of 2.8 months (vs. 4.0 months).

The subgroup analysis of Japanese patients in the OAK study (7%; 64/850, 36 patients in atezolizumab arm) revealed a median OS and PFS of 21.3 and 4.2 months, respectively, which were significantly longer than the results reported from OAK (12). Notably, the median OS and PFS reported in the docetaxel group was also lengthened to 17.0 and 4.4 months, respectively. In contrast, the ORR was 11.1%, which is lower than that reported from OAK, showing a discordant trend. Although only a small subset of patients was analyzed and the results should be interpreted with caution, these results indicate that Asian patients can benefit from atezolizumab over docetaxel at subsequent line settings.

KEYNOTE-024 and KEYNOTE-042 have demonstrated the efficacy of pembrolizumab in previously untreated, advanced NSCLC patients (13,14).

KEYNOTE-024 investigated pembrolizumab versus the investigator’s choice of platinum-based chemotherapy for patients with PD-L1 expression on at least 50% on tumor cells, but without EGFR/ALK rearrangements, and met its primary end point for PFS [10.3 (95% CI, 6.7–not reached) vs. 6.0 months (95% CI, 4.2–6.2)] (13). However, the study was mainly performed in North America and western Europe, and recruited only 13% of patients from East Asia in the pembrolizumab arm.

Based on the above-mentioned studies, the NCCN guideline recommends pembrolizumab monotherapy as the first-line therapy for advanced NSCLC patients with negative or unknown EGFR/ALK mutational status and PD-L1 expression ≥50% or ≥1%, if unfit or intolerant to combination chemotherapy. Although further real-world data on first-line pembrolizumab is warranted, these results indicate that first-line immunotherapy is just as feasible in Asians as is in Western patients.

However, Asian NSCLC patients show a specific characteristic that leads to another question. Asian patients have a higher incidence of EGFR mutation, which accounts for 40–50% in lung adenocarcinoma cases, that has been repeatedly demonstrated as a predictor for poor survival outcomes to anti-PD-1 inhibitors at subsequent line settings (3,8). First-line studies, KEYNOTE-024, KEYNOTE-042 and KEYNOTE-189, excluded patients harboring EGFR or ALK alterations (13-15).

Therefore, are patients with known EGFR/ALK alterations precluded from benefits of first-line immunotherapy? IMPower 150 had a different stance, in which patients who failed tyrosine kinase inhibitor (TKI) were allowed for enrollment. This study demonstrated that the addition of anti-PD-L1 antibody prolonged survival outcome compared with cytotoxic chemotherapy alone (16). Subgroup analysis from IMPower 150 proposed that the addition of atezolizumab to bevacizumab/carboplatin/paclitaxel (BCP) can prolong OS with HR of 0.39 (95% CI, 0.14–1.07) for patients with sensitizing EGFR mutations, who had disease progression to previous TKI therapy, compared with BCP alone. In contrast, the addition of atezolizumab to carboplatin/paclitaxel did not show any survival benefit compared with BCP, suggesting that antiangiogenic drugs may dampen the immunosuppressive tumor microenvironment when combined with atezolizumab. Based on these results, the four-drug combination regimen would be a reasonable treatment option for patients who progressed on previous EGFR TKI. However, given the subgroup analysis, a further confirmatory study with a large number of patients should be investigated.

As anti-CTLA4 antibody combined with anti-PD1 demonstrated significant improvement in survival compared with monotherapy, a similar approach was conducted in NSCLC patients. Recently, CheckMate227 evaluated the efficacy of nivolumab and ipilimumab combination compared to platinum doublet chemotherapy for advanced or recurrent NSCLC patients who had not previously received anticancer therapy (17). The study demonstrated a superior PFS of 7.2 months, versus 5.5 months for chemotherapy, for patients with high tumor mutational burden (TMB) of ≥10 mutations per megabase. A total of 15% and 20% of patients in nivolumab/ipilimumab arm and chemotherapy arm were recruited from Asia, respectively. The subgroup analysis for Asian patients showed that the hazard ratio for PFS was 0.34 (95% CI, 0.15–0.75), which was consistent with results in the global patient population (18). Further, pharmacokinetics of nivolumab and ipilimumab did not show clinically meaningful differences between the populations.

Although studies are limited for immunotherapy combinations, we can infer from one landmark study that the combination strategy is a viable therapeutic approach for patients with high TMB, with efficacy consistent across Asian and Western patients.

Anti PD-1 and PD-L1 inhibitors introduced a unique set of “immune-related” adverse events (AEs) that were not experienced with conventional cytotoxic chemotherapeutic agents. These AEs can involve every organ and present with a wide range of clinical conditions (19). 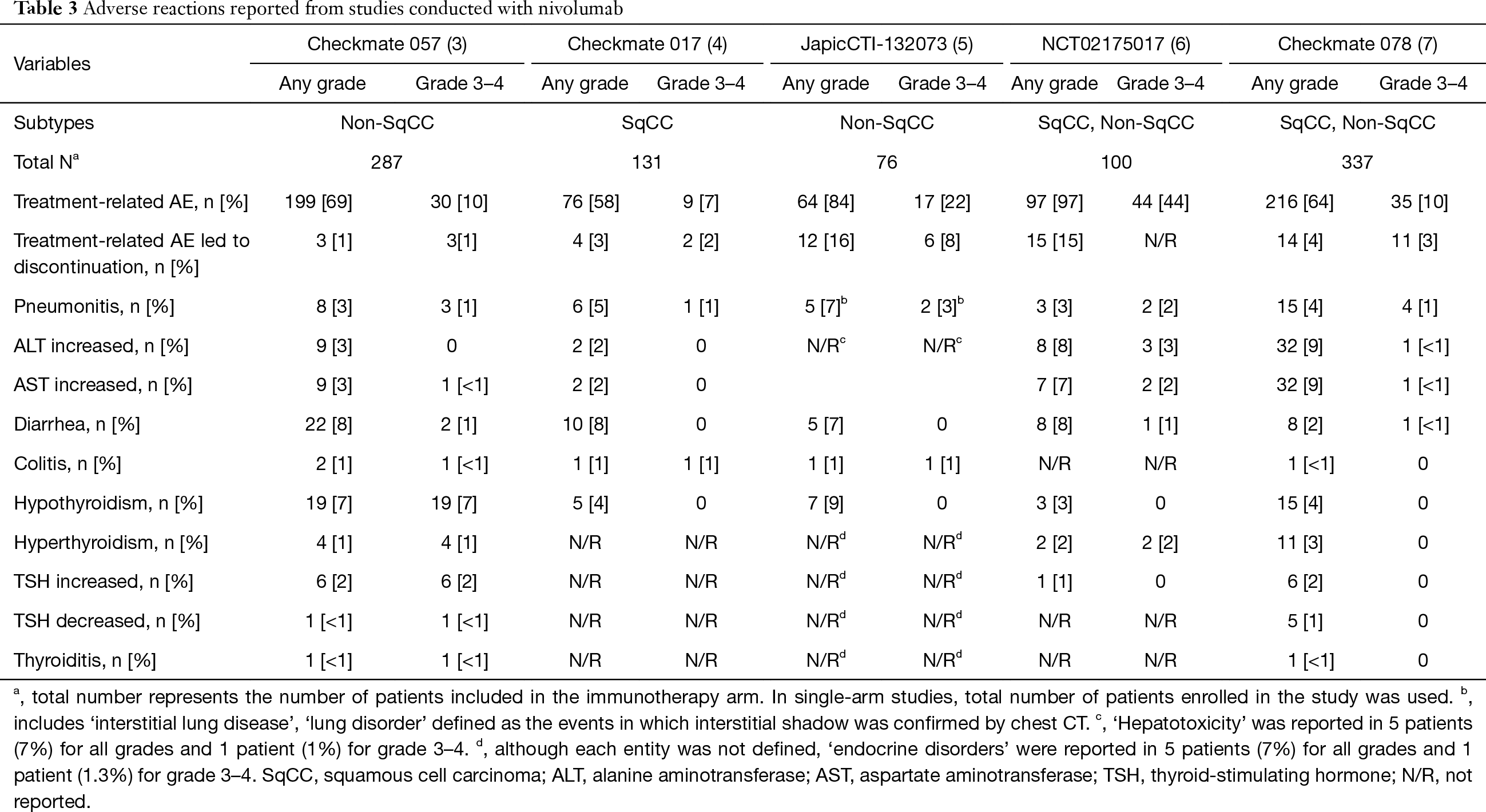 Pneumonitis, one of most concerning immune-related reaction in lung cancer patients, demonstrated a similar incidence rate (3–5%) in the studies conducted in Western countries, Korea and China. The study conducted in Japan reported events in which interstitial shadows were confirmed by chest CT in 6 patients (7%), including interstitial lung disease in 4 patients (4%) and lung disorder in 2 patients (3%). The discontinuation rate due to adverse events was 16%, which was higher than that reported from other studies. A comparison is difficult due to differences in AE entity reported; however, the incidence of AE related to lung is described more frequently in the Japanese cohort. Considering a high incidence of interstitial lung disease associated with EGFR TKI in a Japanese patient population compared with Caucasian and other Asian countries (20), there might be potential differences in toxicity patterns, especially in immune-related pneumonitis between Japan and other Asian countries.

Nevertheless, the results are still too preliminary to draw any definitive conclusions on the difference in AEs between Asian and Caucasian lung cancer patients treated with immunotherapy. Further studies are warranted.

Previous reports have suggested that Asian and Caucasian lung cancer patients have different epidemiology, genetic susceptibility and molecular profiles (21). However, whether such differences affect the responses or toxicity profiles with respect to immunotherapy have not been elucidated. Since no data have directly compared the efficacy and safety of immunotherapy between Asian and Caucasian patients, the interpretations should be made with caution. Our report primarily summarized the data from subgroup analyses and compared the results from studies with similar, but not identical, inclusion criteria. However, it is plausible to conclude that the ethnic difference does not result in significant differences for patients treated with immunotherapy, in terms of response rates and survival outcomes.

For immune-related adverse reactions, the results are still too preliminary to conclude whether the incidences or severities differ between Asian and Caucasian patients. Even if they do differ, further studies are required to explore whether such differences are attributable to the underlying ethnic difference. Another possible explanation may be the difference in physicians’ attitude or approach to immune-related AEs, including the intervals of radiographic follow-ups and a prompt discontinuation of drug when AEs are suspected.

Hence, a well-structured design and balanced recruitment for clinical trials should be emphasized. Only then can the patients from different ethnic backgrounds be stratified, allowing for a better analysis in the ethnic difference in efficacy and safety for immunotherapy. Currently, various immune checkpoint inhibitors are widely used in clinical practice, generation of “real-world evidence” from each region will provide long-term efficacy and safety along with information on ethnic differences. With rapidly increasing indications and use, such information will be essential to deliver maximum benefits for patients with NSCLC.

Conflicts of Interest: All authors have completed the ICMJE uniform disclosure form (available at http://dx.doi.org/10.21037/jtd.2019.08.29). The series “Ethnic Difference in Lung Cancer” was commissioned by the editorial office without any funding or sponsorship. The authors have no other conflicts of interest to declare.