In recent years, detection of smaller pulmonary nodules, became possible with the development of computed tomography (CT) and the spread of high-resolution (HR) CT as well as low-dose CT examinations.

The TNM classification was updated to the eighth edition (28) in January 2017, and the new subcategory “the solid component of tumor” was added to the new criteria of the tumor category (T). There remain many unclear features regarding predictors of lymph node metastasis among the patients with T1 adenocarcinoma based on the TNM classification, 8th edition. Therefore, the aim of this study was to identify the preoperative predictors of lymph node metastasis in clinical T1 adenocarcinoma by comparing clinicopathological characteristics between the groups with and without lymph node metastasis.

We performed a retrospective observational single-center study of patients with primary lung adenocarcinoma and conducted at the Sendai Kousei Hospital, Miyagi, Japan. All patients gave written informed consent. From January 2012 to September 2019, we included 515 patients who underwent curative lobectomy or segmentectomy and mediastinal lymph node dissection among clinical T1 adenocarcinoma based on the Union for International Cancer Control (UICC)-TNM staging 8th edition.

The protocols of data collection and analysis were approved by our institutional review board (IRB No. 1-23) at Sendai Kousei Hospital; the requirement for written informed consent was waived because the data were analyzed retrospectively. This article was based on the STROBE (Strengthening the Reporting of Observational Studies in Epidemiology) statement: guidelines for reporting observational studies (29).

The data of FDG-PET/CT were collected in 470 (91.2%) patients, and FDG-PET/CT scanning was performed according to the procedures of our hospital (Sendai Kousei Hospital, Miyagi, Japan). Patients stopped consuming sugar within at least 4 hours before a scan. Blood sugar levels were measured before starting the examination, and the scan was postponed when it was 200 mg/dL or more. First, patients were intravenously administered 5.735 MBq/kg 18F-FDG, and then rested for 90 minutes. We identified the position of the lesion using PET. Using a low-dose of thickness of 3.75 mm from the base of the skull of each patient to the femoral center, the decay correction of the non-revision CT image was subsequently obtained using a standard protocol. These PET scanning/images were acquired at bed positions of 7–9 in a Discovery ST elite PET/CT scanner (GE Medical Systems, Waukesha, WI, USA). The raw PET data were rebuilt using a section image of thickness 3.27 mm to evaluate volume changes in the 3D-ordered subsets expectation maximization (OSEM) algorithm that incorporated CT-based decay correction (2 iteration/28 subsets).

We used a workstation (Advantage Workstation 4.2) for indication and image analysis and calculated SUVmax of the primary tumor. All PET/CT images were interpreted by an experienced nuclear radiation engineer. The definitions of nodal station were based on the International Association of the Study of Lung Cancer (IASLC) lymph node map (30) and pathological diagnoses were based on the 2011 IASLC classification (31).

In cases that did not acquire a diagnosis after these examinations, for example, in particular, a peripheral small nodule, if the patient agreed to undergo lung resection after we provided sufficient explanation for its requirement, lung resection was planned.

Receiver operating characteristic (ROC) curves to predict lymph node metastasis were used to determine the cutoff value that yielded optimal sensitivity and specificity using the Youden index for each variable.

The method using the Youden index was used to define the maximum potential effective cut-off value in the ROC curve and calculated (sensitivity + specificity − 1; Youden index), and the cut-point that acquired the maximum value was defined as the optimal cut-off value. 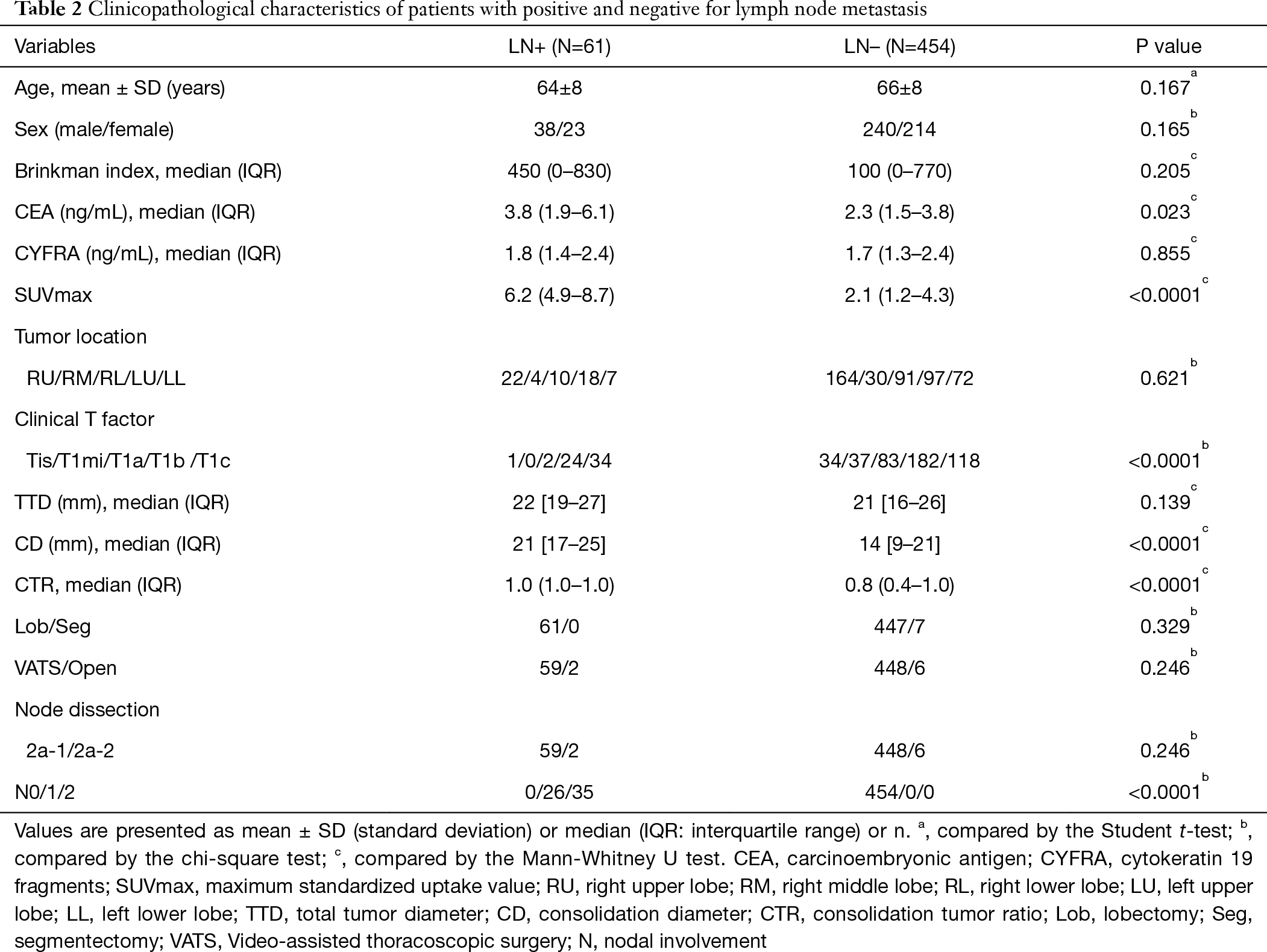 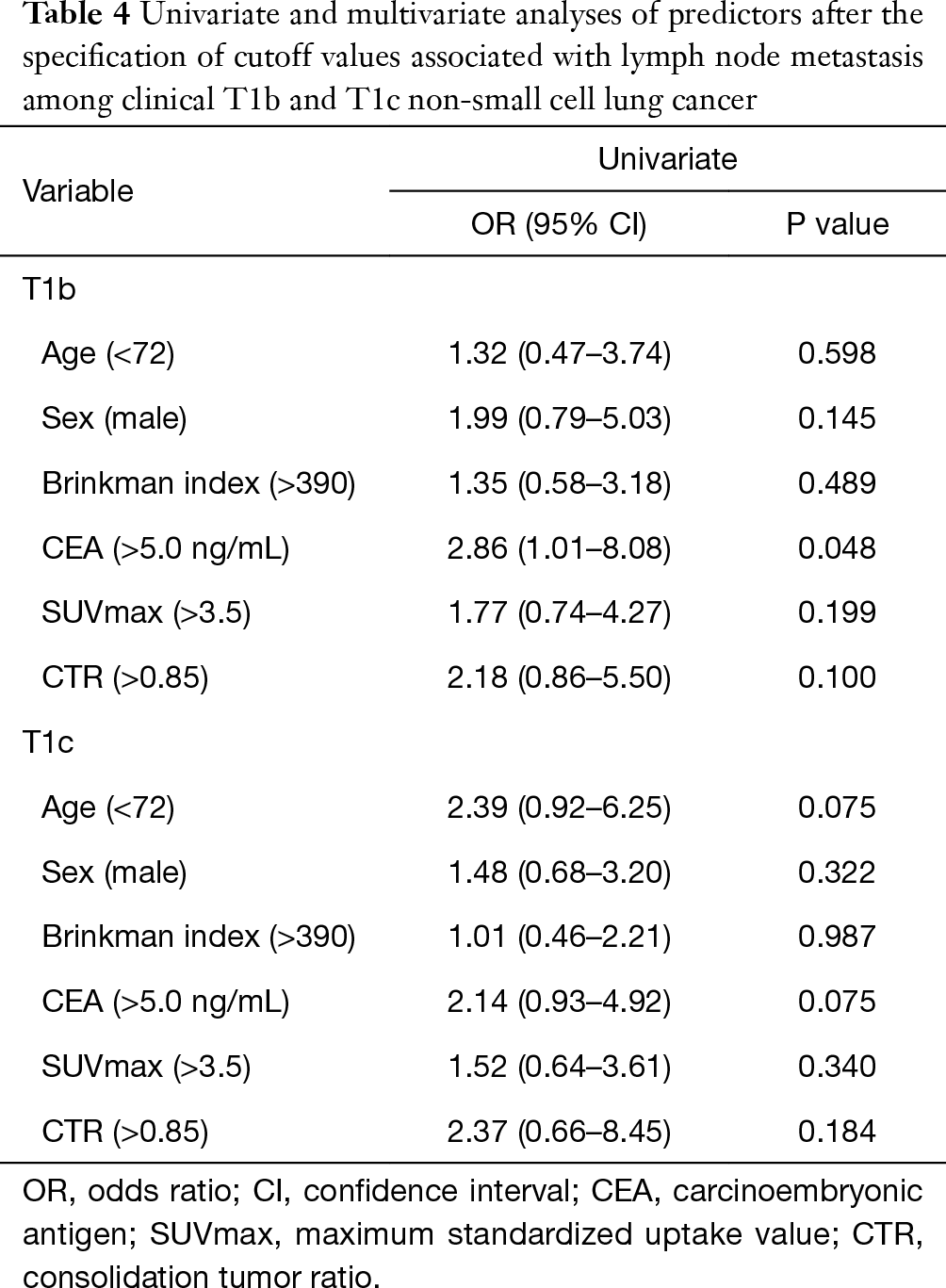 Uptake of FDG correlated with the proliferative activity of tumor that independently became a prognostic factor for patients with lung cancer (33,34). We believe we can identify lymph node metastasis by CT and PET/CT. However, the sensitivity for node-positivity on CT is 50–80%, and the specificity is 50–90% (35,36). Authors also reported that 10 mm or less in the minor axis of lymph nodes indicated metastasis-positivity on CT. When accumulation of FDG in the lymph nodes was beyond 2.5, lymph node metastases were considered positive; nevertheless, lymph node metastases were often pathologically negative in such cases.

Sensitivity of clinical N using the PET was 60–90%, and the specificity was 70–100% (35,36). In another study, the uptake of FDG was shown to be a potential predictor of nodal metastasis in small primary NSCLC (37). Maeda et al. (21) reported that lymph node metastasis was not identified among patients with stage IA NSCLC when the value of SUVmax was 2 or less. In the present study, we also found no patients with lymph node metastasis when the value of SUVmax was 2 or less. Many studies found that high preoperative values of CEA were poor prognostic factors in stage I NSCLC (38).

Incomplete dissection or sampling of lymph nodes could result in local recurrence. Many surgeons advocate for routine systemic nodal dissection so as to secure complete local control of an NSCLC, even if a patient’s disease is classified as clinical stage IA; this is because even small NSCLC lesions have considerable potential for lymph node metastasis (1).

Allen et al. (45) reported that mediastinal lymph node dissection or sampling causes a high rate of complications (about 38%) and omitting node dissection reduces complications and invasiveness and improves postoperative recovery. Systemic lymph node dissection could be avoided in selected patients if there appears to be no lymph node metastasis; that is, if we could identify predictors associated with pathological N0. If the minor axis of the mediastinal lymph node is less than 10 mm, it has been suggested that this predicts negative lymph node metastasis. Tsutani et al. (22) proposed “N0 criteria” using CT and PET/CT among the stage 1A adenocarcinoma, with a solid component diameter of <0.8 cm or SUVmax of <1.5 for selecting candidates for sublobar resection. Nevertheless, the definitive or universal criteria for prediction of lymph node metastasis have yet not been established.

We need to mention some limitations to the present study. First, this was not a randomized controlled study. This study was a retrospective observational study in a single institution; therefore, the evidence level fell moderately. Second, measurements of tumors varied to some extent for each doctor. It appeared to improve when at least two or more doctors perform the measurement. Third, during the early period in this study, there were a few cases in which PET/CT was not performed for small tumors (mainly those <1 cm), which might have affected the results, whereas among patients for whom PET/CT was performed, SUVmax might depend on the modality.

In conclusion, our findings suggest that SUVmax and CEA would be useful as preoperative predictors of lymph node metastasis in patients of clinical T1 adenocarcinoma, with clinical T1b stratified, based on the TNM classification 8th edition. Further accumulation of data is needed to identify the predictors of lymph node metastasis among the patients with clinical T1 adenocarcinoma.

Conflicts of Interest: All authors have completed the ICMJE uniform disclosure form (available at http://dx.doi.org/10.21037/jtd.2020.03.74). The authors have no conflicts of interest to declare.

Ethical Statement: The authors are accountable for all aspects of the work in ensuring that questions related to the accuracy or integrity of any part of the work are appropriately investigated and resolved. This study was approved by the Institutional Review Board of Sendai Kousei Hospital (IRB No. 1-23).