Optimal radiation dose in the neoadjuvant management of esophageal cancer

Neoadjuvant chemoradiation for the management of resectable esophageal cancer has become the standard of care. While there was some controversy as to the benefit of neoadjuvant chemotherapy or chemoradiation in the past, the CROSS trial provided very clear evidence of the survival benefit by using preoperative therapy compared to surgery alone (1). There were two major innovations in the CROSS trial: the first was the use of carboplatin and paclitaxel as opposed to the cisplatin and 5-fluoruracil (5-FU) traditionally used for esophageal cancers. This chemotherapy regimen is generally better tolerated and easier to deliver than cisplatin and 5-FU. The other innovation was using a lower neoadjuvant radiation dose of 41.4 Gy in 23 fractions as opposed to the more standard dose of 50–50.4 Gy in 25–28 fractions. Despite the lower dosing of radiation, the results of the CROSS trial are the best ever seen in a randomized Phase III trial with an overall pathological complete response (pCR) of 29% [49% for squamous cell carcinoma (SCC)] and a median overall survival of 49.4 months.

The neoadjuvant radiation dose of the CROSS trial was chosen based on a previous single arm Phase II using this regimen (2). While the dose might seem low to many radiation oncologists, certainly compared to doses used typically in the United States, many trials had used lower doses prior to CROSS. For instance, the “Irish” study, which found a survival benefit for neoadjuvant chemoradiation in resectable adenocarcinoma of the esophagus, used 40 Gy in 15 fractions (3). Another earlier study from the TROG group used 35 Gy in 15 fractions for their neoadjuvant regimen (4). In contrast, the American CALGB 9781, which never completed accrual, used the standard 50.4 Gy in 28 fractions more traditionally used in the treatment of esophageal cancer (5).

The article “Induction Radiation Therapy for Esophageal Cancer: Does Dose Affect Outcomes?” attempts to address the effect of neoadjuvant radiation dose on pathological response rates and outcomes (6). Because there is no randomized trial addressing this question, they use the National Cancer Data Base (NCDB) from the United States, a large multi-institutional database of cancer patients. The NCDB records radiation dose and technique as well staging and pathological response rates for patients. In total, 10,738 patients were identified and were divided into low (<40 Gy), standard (50.4 Gy) and high dose groups (>50.4 Gy). They found neoadjuvant radiation dose was associated with increased rate of pCR and downstaging (P<0.001). There was a 2.1-fold increase of 30-day mortality from high dose radiation. Despite improving pathological downstaging, there was no difference in overall survival when stratifying for radiation dose. The strengths of this manuscript are in its size and power. Limitations include the fact NCDB does not include information about local control or the use of chemotherapy. It is also retrospective in a large anonymous database so conclusions should be limited.

In taking a step back, one must ask the question whether higher radiation doses are, in fact, superior in the neoadjuvant treatment management of esophageal cancer. On the one hand, first principles of radiation biology show a sigmoidal curve for cell kill vs. radiation dose, and higher doses produces potentially better tumor control (Figure 1). Dose escalation has worked in other cancers such as prostate, head and neck cancers, and anal cancers. Arguing against this, specifically in esophageal cancer, is the ill-fated Intergroup 0123 which did not find a benefit to dose escalation in the definitive management of esophageal cancer (7). These results have been recently confirmed in the Dutch ARTDECO, which has only been presented in abstract form, but found no overall survival benefit with radiation dose escalation in the definitive setting. Similarly, we have seen in RTOG 0617 that higher doses do not appear to add benefit in the management of locally advanced non-small cell lung cancer (8). 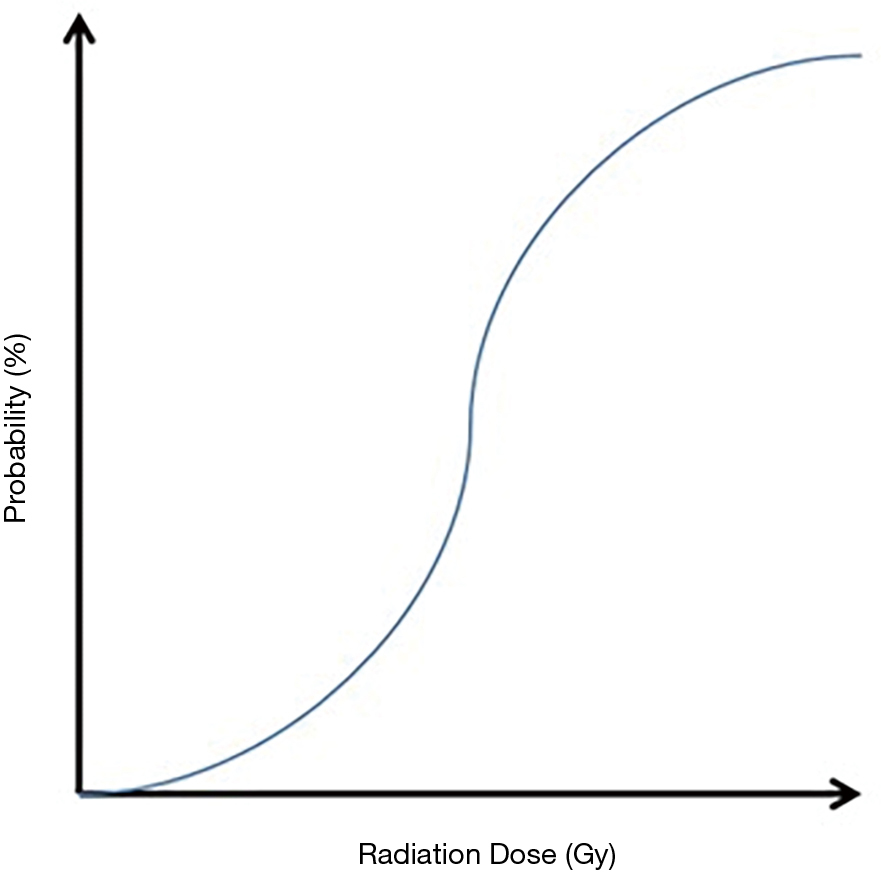 Going back to aforementioned sigmoidal curve for cell death vs. radiation dose, there is a shoulder to the curve where minimal increased cell death is achieved while potentially exposing the patient to more toxicity. We don’t know the true inflection point in the sigmoidal curve for esophageal cancers, and higher doses might expose patients to increased risk without appreciable oncologic benefit. This is becoming increasingly appreciated with the growing literature of late complications in long term late survivors after treatment for esophageal cancer. There is a large literature now showing that radiation exposure in the neoadjuvant treatment of esophageal cancer is associated with cardiac toxicity and might increase late mortality risk (9-11). Likewise, the risk of radiation pneumonitis increases with higher lung exposures (12). Therefore, groups are increasingly looking into strategies such as intensity modulated radiation therapy (IMRT) or proton therapy to reduce radiation doses.

The biggest concern about lower neoadjuvant radiation doses comes from the fact that lower radiation doses might produce inferior oncological outcomes. This concern can be manifested in one of two ways—first, lower doses might translate into worse tumor control. The recent study from Semenkovich et al. suggests that while slightly higher pCR rates are achieved with higher doses, this did not translate into inferior oncological outcomes (6). Our group published similar results using the same database many years before (13). Our group has also explored pCR rates in 41.4 vs. 50.4 Gy in the neoadjuvant setting and have not found any statistical differences (manuscript under review). To our knowledge, there is no converse data available suggesting inferior outcomes with 41.4 Gy in the neoadjuvant management of esophageal cancer.

The second concern with a lower neoadjuvant dose is that 41.4 Gy is only appropriate in the neoadjuvant setting and would not be a sufficient definitive dose. What happens when a patient is planned for surgery and then does not undergo a planned resection? Because of 4–6 weeks in between completion of neoadjuvant therapy and surgery, there is little benefit in giving another 9 Gy boost to achieve the typical definitive radiation dose of 50.4 Gy or higher. The frequency of dropout from neoadjuvant to definitive radiation has not been well studied and is a legitimate concern for many radiation oncologists. For instance, the NCDB studies mentioned above only look at patients who had a resection and cannot estimate a fallout rate. Our institution therefore has a policy to offer lower dose radiation to patients who have been determined by their surgeon to be a good surgical candidate, barring any unforeseen changes.

The only way to answer the question of the optimal radiation dose for neoadjuvant management of esophageal cancer is a randomized trial. However, this is unlikely to ever be done since it would require a very large and costly non-inferiority design with very long follow up to capture late toxicity events. A multi-institutional Phase II protocol might be the best way to explore the question to obtain a true assessment of the pCR rate as well as the dropout rate of patients who cannot have surgery. If pCR rates are the same, these patients might have equivalent outcomes with potentially less toxicity. Studies from the NCDB add to the pool of evidence that there might not be a benefit to dose escalation, and that neoadjuvant radiation dose deescalation might be an acceptable strategy to decrease late toxicity. Nevertheless, clinicians should use discretion in picking a neoadjuvant radiation dose.