While the results of controlled studies are still pending (1-3), interest in sublobar resections (SLRs) is growing in the thoracic surgeons’ community. This is evidenced by the number of publications (4) and even conferences dedicated to this topic. However, the subject remains highly controversial, with those who consider SLR can be applied to some early stage cancers—even in patients who could tolerate a lobectomy—and those who believe that SLR should be proposed only in patients who are fragile or have a compromised respiratory function.

In surgery, it is usual practice to answer a question by basing on published results, if possible from randomized studies or large cohort series. We can however analyze these studies in two parts: (I) what do the published studies suggest and (II) can we trust the results? In other words, are these studies reliable and unbiased?

What do publications say? The excellent article of Mimae and Okada (5) is no exception to a rule present in almost all articles dealing with SLR, i.e., citing once again the 1995 Lung Cancer Study Group study (6), which showed a superiority of lobectomies over SLR in terms of local recurrence and survival for pT1aN0 non-small cell lung carcinomas (NSCLCs). Few thoracic surgery publications have had such a significant and prolonged impact as the article by Ginsberg et al., although its methodology was questionable. Not only was the number of patients small [247], but the SLR group included both wedge resections and segmentectomies, and there were no technical data on lymph node (LN) (Figure 1) dissection and intraoperative analysis of nodes and resection margins (Figure 2). The large cohort study by Whitson et al. showed much more convincing results (7). Although this was a retrospective survey, it was based on the analysis of more than 14,000 patients from the SEER database with stage I adenocarcinoma or squamous cell carcinomas. It showed a significant different survival in favor of lobectomies, whatever the tumor size. Similar results have been published recently, in particular the meta-analysis by Rao et al. who concluded SLR should not be used for pure solid tumors, whatever their size (8). It should be noted, however, that 2 other recent meta-analyses concluded that results were equivalent for tumors <2 cm (9,10). 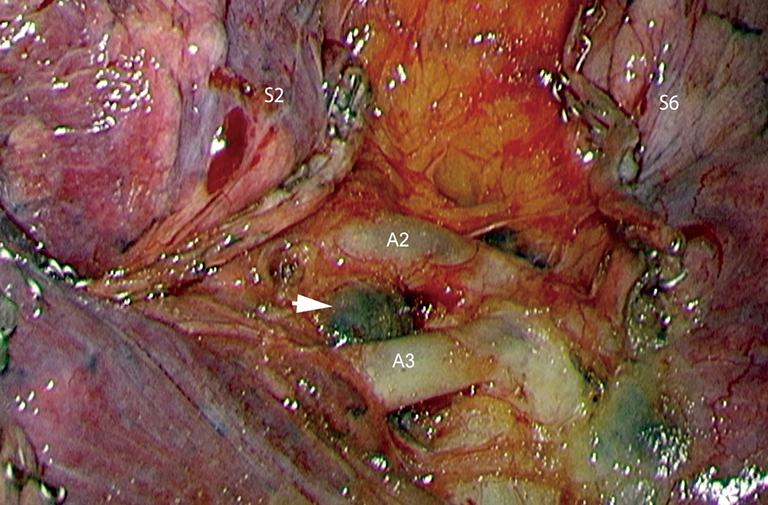 Figure 1 Example of an intersegmental lymph node (arrow) discovered during a left S2 segmentectomy. It should be retrieved and sent for frozen section. 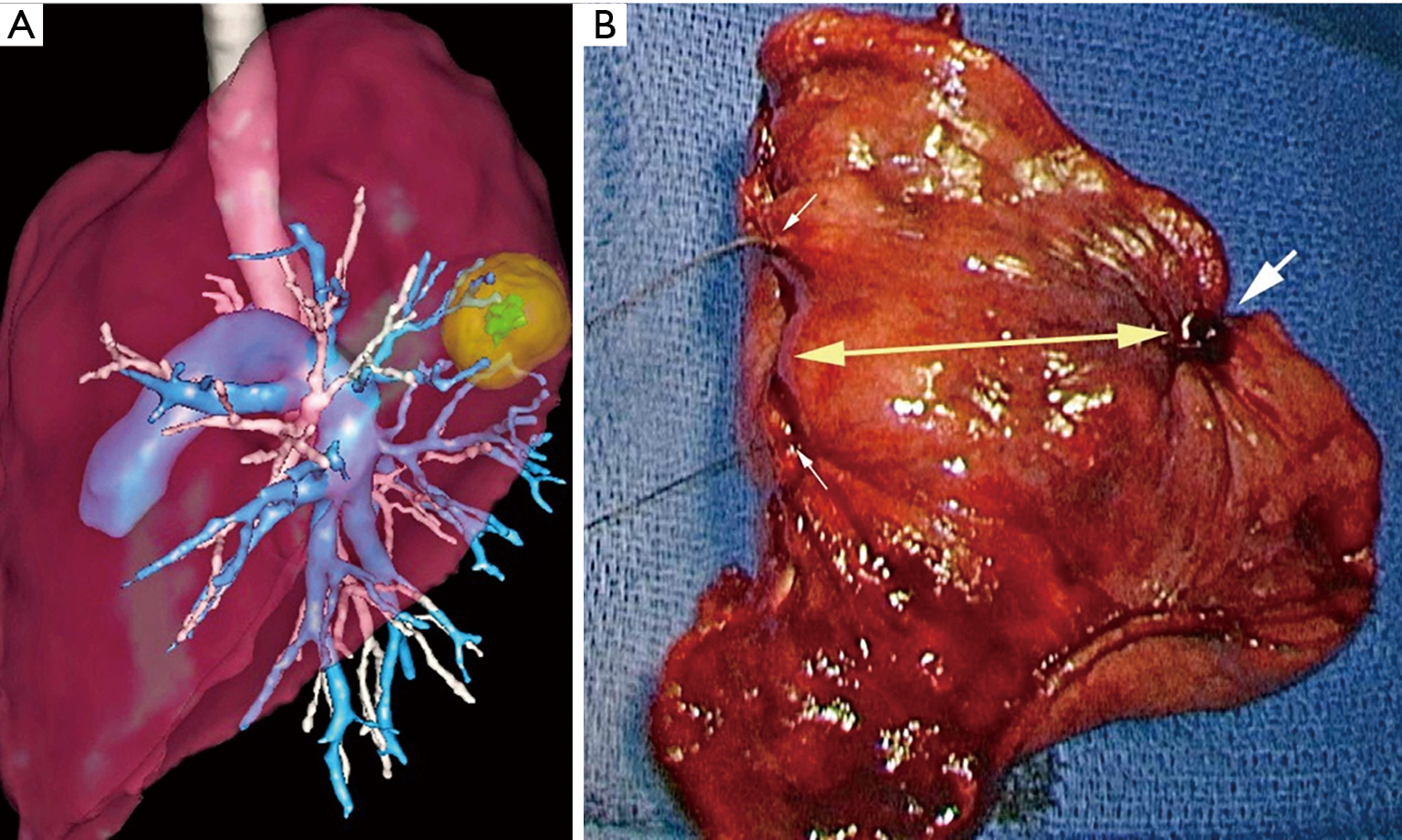 Figure 2 Two ways of predicting the safety margins. (A) Modelization of on a 3-dimensional reconstruction. The target nodule is green, the margin is represented by a yellow sphere. (B) at completion of the segmentectomy, the specimen is sent for frozen section for examination of the staple line, between two stiches (thin white arrows). Large white arrow = target nodule, large yellow arrow = margin length between the nodule and the staple line.

Second question: can we trust the published results? The concern raised by these apparently rigorous studies is the following: on reading the articles, we miss some technical data that are yet essential for comparing the two techniques. For example, it is most often not mentioned if the intersegmental LNs are cleared and, above all, if they are analyzed by frozen section in order to enlarge the resection or to switch to a lobectomy. Similarly, it is generally not indicated if there is an intraoperative analysis of the resection margins. We know from the results published by Schuchert et al. that local recurrences are highly correlated to the width of the margin (11). If these 2 analyses, i.e., margins and intersegmental LN, are not done, a certain rate of recurrences is unavoidable and the results of the SLR group will thus be jeopardized. On our initial series of 284 thoracoscopic segmentectomies, we had demonstrated there were 15 unplanned enlarged resections, mainly for insufficient safety margin or invaded or suspicious LN at frozen section (12). An illustration of shortcomings of many publications is found in the work of Subramanian et al. comparing a group of 1,354 lobectomies with a group of 333 SLR for early-stage NSCLCs (13). Overall survival was identical but the risk of recurrence was 39% higher in the SLR group. In fact, out of the 333 SLR, there were actually 285 wedge resections and only 48 segmentectomies. The mean number of LNs removed in the Lobectomy group was 7 and only 1 in the SLR group, and the resection margins were invaded in 6.6% of cases. Such deficiencies are most likely found in other centers but are unknown and not published. Given that the practice of segmentectomies is very demanding, especially when these procedures are performed by thoracoscopy, questions arise about the technical rigor with which they are performed and therefore about the results. One may wonder whether we should not rely on more limited and monocentric studies from expert centers. In several of these studies, anatomic segmentectomies compared very favorably with lobectomies (14-16).

As indicated by Mimae and Okada, we have to wait for the three ongoing randomized trials to have a more precise idea of the results. However, it should be noted that one of these trials mixes anatomical segmentectomies and wedge resections, which will pose a problem in interpreting the results unless the sample sizes are large enough to allow for subgroup analysis. There is also a risk of a high bias in patient selection related to surgical practice. Thus, as mentioned in the recent article by Kamel et al. (17) on the technique used to resect stage Ia NSCLC detected in a screening program, only a minority of surgeons perform thoracoscopic segmentectomies. However, one may wonder how decision is made between a lobectomy (mastered by any thoracic surgeon) and a complex thoracoscopic segmentectomy, the practice of which is far from being common in many centers, at least in Europe and the USA.

While waiting for the results of these studies, can we assert there is a real benefit to performing an SLR rather than a lobectomy? Is it worth it?

In terms of lung function preservation, the published results are contradictory. According to Charloux and Quoix, there is a benefit but only a minor one (18). In fact, Macke et al. did show that the gain in FEV1 is proportional to the number of segments removed and that the benefit is real for SLRs limited to one or two segments (19). The majority of studies confirm that SLRs preserve parenchyma better than lobectomies (19-21).

The postoperative complication rate is also lower after SLR than after lobectomy and the length of stay is shorter (22). The benefit of SLR is optimal when the procedure is performed via closed chest surgery, as shown by several studies (23-25). We had demonstrated that the thoracoscopic approach very significantly reduces the morbidity of segmentectomies (26).

In all, a large number of recent publications point in the same direction: SLR better preserves respiratory function—and therefore quality of life—and has fewer complications than lobectomies. If the ongoing trials (1-3) confirm the results of recent monocentric series, that is, survival without recurrence is identical or even superior to that of lobectomies, the switch to thoracoscopic or robotically assisted anatomical segmentectomies will become unavoidable.

Thoracic surgeons will then have to face a technical gap much more challenging than the “open versus closed chest” gap, especially for complex segmentectomies. For it would be disputable to choose between lobectomy and segmentectomy simply because one does not master this or that technique. To overcome these difficulties, the surgeon will not only have to master the techniques but will have to rely on several technologies, e.g., target location by endobronchial navigation or any other mean, preoperative modelling and/or 3D printing and intersegmental plane identification.