Distribution of descending necrotizing mediastinitis and efficacy of distribution-specific drainage

Descending necrotizing mediastinitis (DNM) resulting from oropharyngeal and cervical abscess is a life-threatening condition. The historical mortality rate of DNM has been reported to range from 23–51% (1-4). As surgical management without delay has been understood well as a key to cure the patients, the mortality rate has been decreased (11–17.5%) (5-7). However, because of the low incidence of DNM, details concerning the extension and distribution of the abscess to the mediastinum and appropriate drainage sites remain unclear.

A retrospective review was conducted for seven patients who underwent thoracic drainage by thoracotomy or video-assisted thoracic surgery (VATS) for DNM at Aichi Medical University Hospital between November 2011 and March 2019. Clinical data were analyzed in the present study. The DNM diagnosis was made on the basis of criteria defined by Estrera et al. (12) in 1983. The detailed extension and distribution of the thoracic abscess was evaluated by computed tomography (CT), and DNM was classified according to Endo’s criteria as either type I (focal) mediastinitis (infection located in the superior mediastinal space, above tracheal bifurcation) or type II (diffuse) mediastinitis; type II mediastinitis was in turn subdivided into two subtypes of IIA (infection still located in the anterior inferior mediastinal space) and IIB (infection has reached the posterior inferior mediastinum) (13).

This study was approved by the Institutional Review Board of Aichi Medical University Hospital. The analyzed values are presented as the mean ± standard deviation.

Although there were no mortal cases or severe complications following drainage, surgical hemostasis was performed for postoperative bleeding in one patient. The mean hospital stay was 66±41 days. Laboratory data on inflammation parameters were almost normal by discharge (WBCs: 4,600±1,680/µL, CRP: 0.46±0.38 mg/dL). The mean observation period was 747±866 days. All patients are alive without recurrence.

Proposal of classification and map of thoracic abscess distribution

Thoracic abscesses of DNM are typically classified according to Endo’s criteria (13). However, in the present study, two patients had an unclassified type. Therefore, we propose a new classification and mapping system for thoracic abscess distribution referred to the International Thymic Malignancy Interest Group (ITMIG) mediastinal compartment (14). We have outlined nine categories of distribution based on the differences in incision sites for drainage, including the anterior thoracic wall, as shown in Figures 1,2, based on the CT and intraoperative findings: 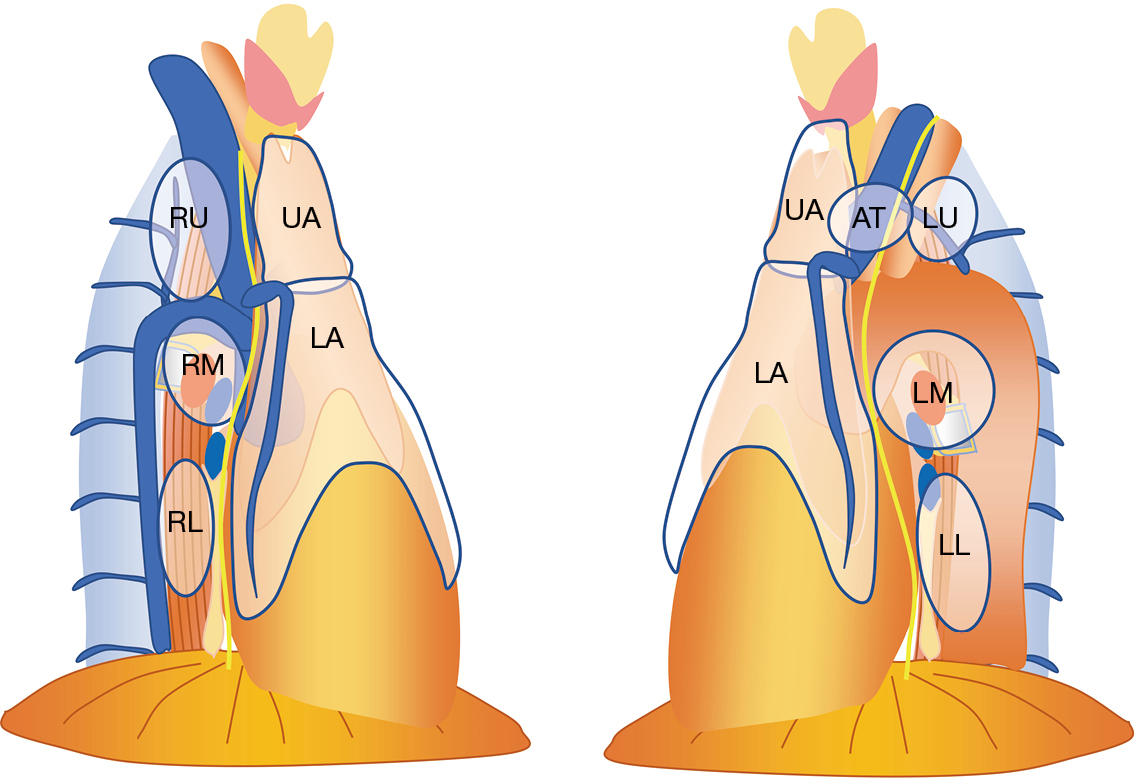 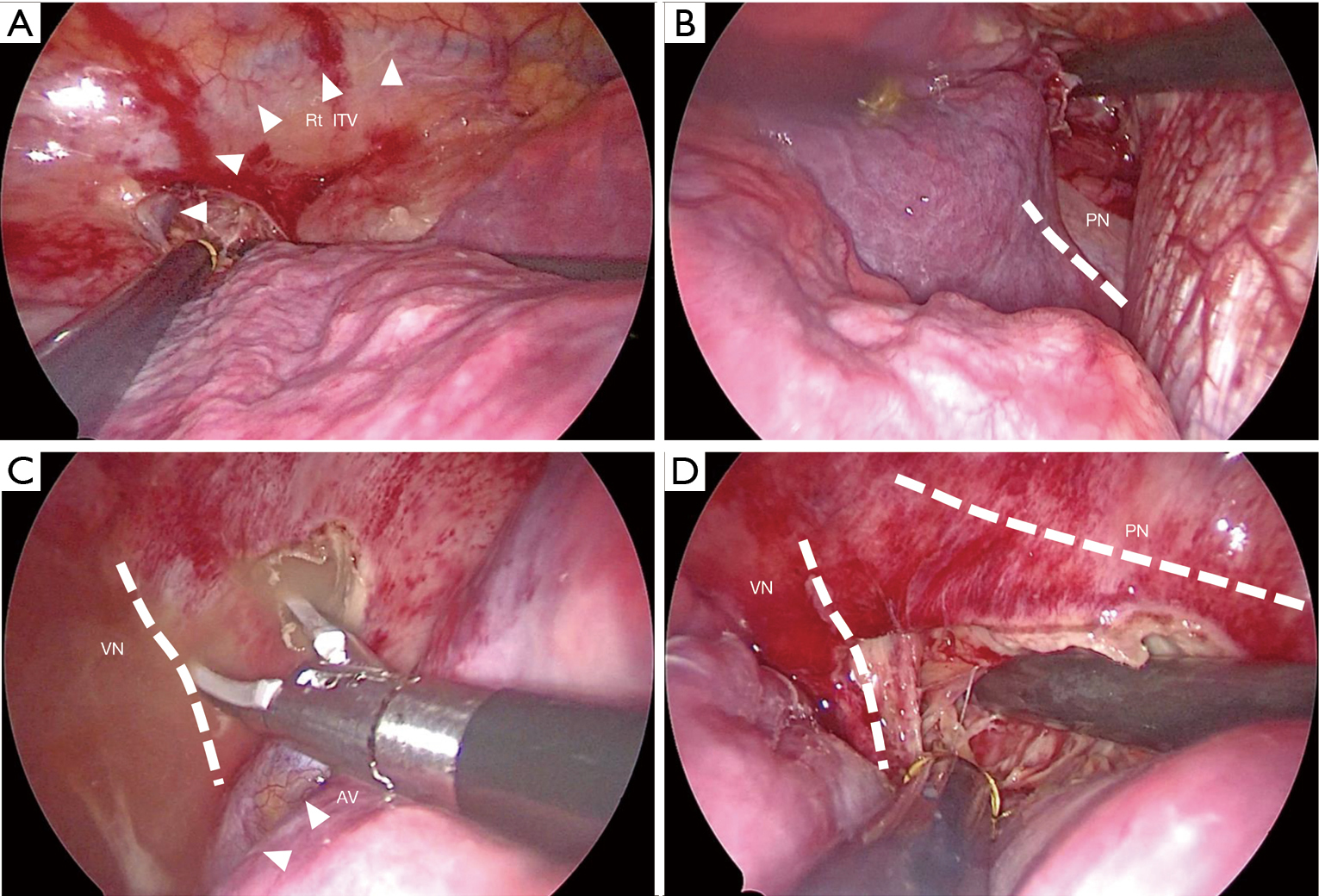 The frequency of the abscess distribution for each category is shown in Table 2. The frequency of abscesses accompanying DNM gradually descends from the neck toward the lower mediastinum. However, abscesses are not necessarily continuous, and skipped lesions are occasionally noted. 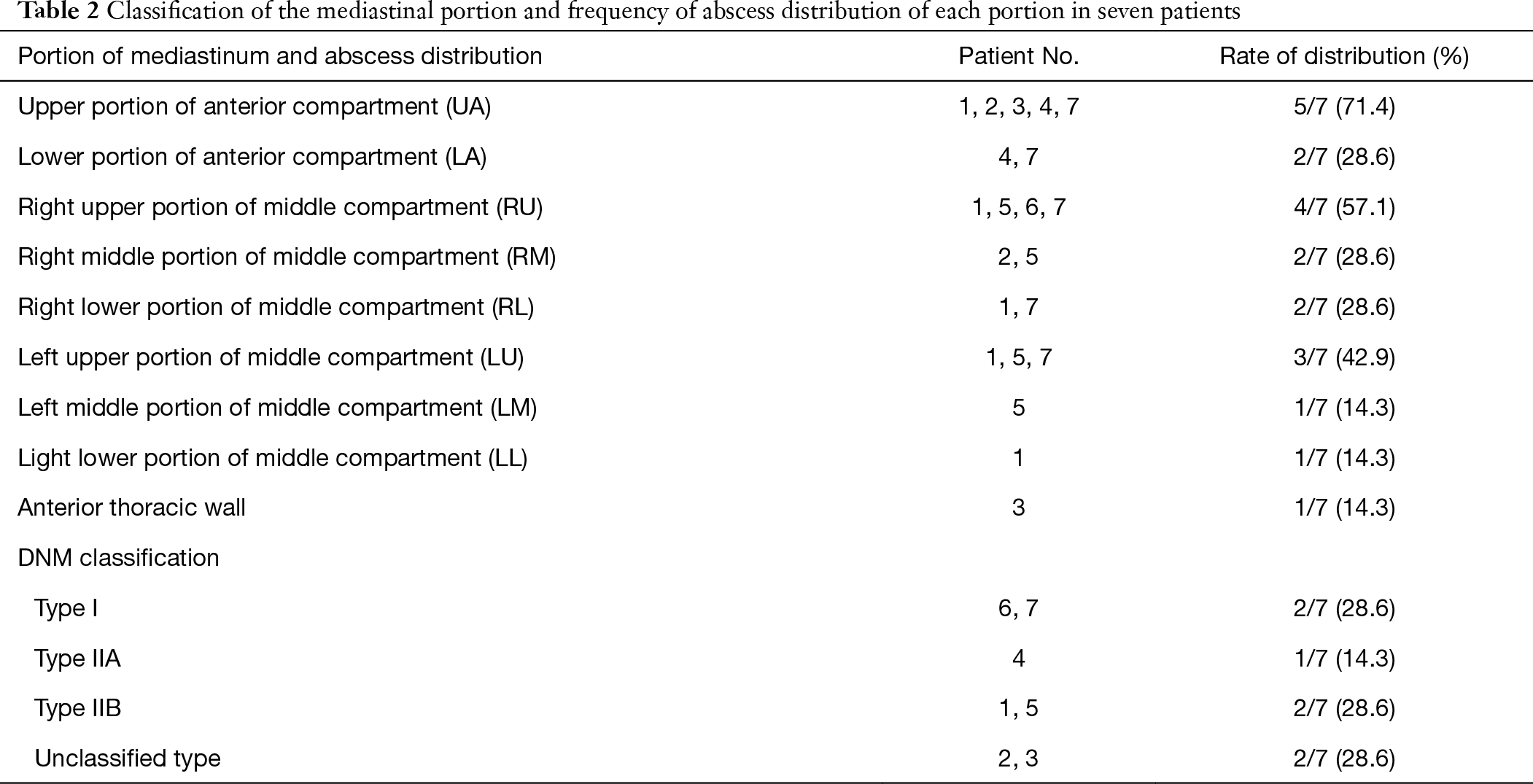 We investigated the patients with DNM who underwent surgical drainage for thoracic abscess and suggest a new mapping and classification system for the thoracic abscess distribution and distribution-specific drainage. As oropharyngeal and/or cervical abscess usually precedes DNM, we collaborate with head and neck surgeons. As the historical mortality rate of DNM has been high (1-4), DNM is well known to be a life-threatening condition. Prompt surgical management is understood to be the key to curing patients, and the mortality rate has been decreased with this approach (5,6,15). However, because of the low incidence of DNM, the details concerning the extension and distribution of abscesses to the mediastinum and appropriate approaches for drainage remain unclear.

Open thoracotomy and extensive mediastinal pleural incision with extensive debridement have been performed as the principal treatment and selected to achieve a cure in patients with DNM. While the efficacy has been suitably demonstrated, bilateral open thoracotomy might be more invasive for DMN patients than VATS drainage. VATS drainage has recently been applied for DNM, and its efficacy has been reported (8-11). To rescue critical patients, this minimally invasive drainage may be an ideal approach. As DNM lesions do not necessarily spread and extend throughout the mediastinum, distribution-specific drainage with VATS techniques may be useful. We were able to cure all of the patients who underwent VATS drainage in the present study. This minimally invasive drainage can be repeated if necessary. Three of the seven cases in the present study underwent repeated VATS drainage to cure their DNM completely because mediastinal abscess still existed after the previous operation or appeared newly in the different portions. While the detailed data were not shown, the operation time for drainage after the first attempt was reduced on subsequent drainage attempts. It is important to know the exact location of the abscess in order to perform appropriate drainage. We therefore suggest a new mapping and classification system for the thoracic abscess distribution using CT findings and distribution-specific drainage.

Regarding the distribution of DNM, Endo et al. classified DNM into types I and II (13). Type II mediastinitis was further subdivided into two subtypes (IIA and IIB). However, we experienced cases that were difficult to classify based on these conventional categories. In our experience, the distribution of the abscess was not continuous, with isolated lesions sometimes scattered about. Drainage of all lesions is necessary to achieve complete treatment. We therefore suggested a map of mediastinal abscesses of DNM that was divided into nine categories. The location of the mediastinal pleural incision or skin incision was different in none categories as stated above.

We were able to cure all seven cases with DNM. Successful management may depend on rapid treatment being performed in collaboration with head and neck surgeons and appropriate thoracic drainage. For appropriate thoracic drainage, recognizing the exact distribution of the thoracic abscess is necessary, and our new mapping and classification approach with nine categories of thoracic abscess distribution may be helpful. In addition, repeated drainage may be needed to achieve a complete cure of DNM.

Conflicts of Interest: All authors have completed the ICMJE uniform disclosure form (available at http://dx.doi.org/10.21037/jtd.2020.03.82). The authors have no conflicts of interest to declare.

Ethical Statement: The authors are accountable for all aspects of the work in ensuring that questions related to the accuracy or integrity of any part of the work are appropriately investigated and resolved. The study was approved by the Institutional Review Board of Aichi Medical University Hospital (No. 2019-208).