Boerhaave’s syndrome is a full-thickness spontaneous esophageal rupture induced by forceful retching (1). This esophageal emergency condition results in a significant morbidity and mortality because mediastinal and pleural contamination with consequent sepsis and multi organ failure if not diagnosed and promptly treated (2). It is commonly reported that survival rate is significantly decreased when the diagnostic delay is longer than 24 hours (3).

Treatment is controversial, depends upon the time of diagnosis, patient medical condition at presentation, and may range from conservative to major resections. Formal thoracotomy and laparotomy were considered the gold standard treatment in the past (4). However, these approaches are associated with significant surgical trauma, stress, and postoperative pain. By contrast, minimally invasive surgery has been shown to be associated with reduced trauma, postoperative pain, systemic inflammatory response, postoperative endotoxemia with a preserved immune function (5,6). Previous studies demonstrated that in the setting of elective esophageal cancer surgery, minimally invasive approaches seem associated with improvements in postoperative pulmonary complication and overall morbidity compared to open surgery (7). However, the application of minimally invasive surgery in the setting of esophageal emergency, such as Boerhaave’s syndrome, is debated and evidence is puzzled. The aim of this narrative review was to summarize the current knowledge on minimally invasive treatment of Boerhaave’s syndrome. We present the following article in accordance with the Narrative review reporting checklist (available at http://dx.doi.org/10.21037/jtd-20-1020).

An extensive literature search was conducted by two authors (AA, GG) to identify all English-written published series on Boerhaave syndrome treated with minimally invasive surgery (thoracoscopy and laparoscopy). PubMed, EMBASE, and Web of Science databases were consulted matching the terms “Boerhaave syndrome” and “laparoscopy” and “thoracoscopy” with “AND” until 30th November 2019. The search was completed by consulting the listed references of each article (8). Iatrogenic, foreign body-related, external trauma, cancer-related, and motility disorder related-perforations were excluded.

The study was approved by the local Institutional Review Board (#0186-2019). Written informed consent was obtained from the patient for publication of this study and any accompanying images. A copy of the written consent is available for review by the Editor-in-Chief of this journal. Informed consent was not necessary for the literature review.

A 49-year-old patient was admitted to our department and diagnosed with spontaneous esophageal perforation. Because the distal location a laparoscopic attempt was planned. The hiatus was opened and the mediastinum dissected. The esophagus was encircled and retracted downward. The perforation was sutured with four absorbable interrupted stitches (2.0 Vicryl®) (Figure 1). The hospital course was uneventful and the patient discharged home on postoperative day 13th. 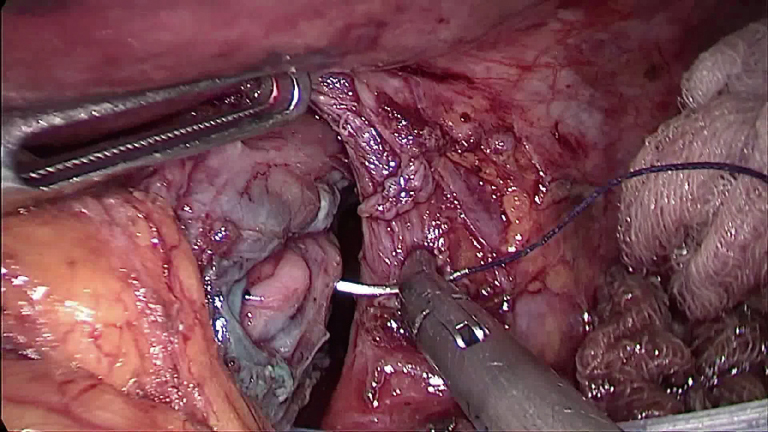 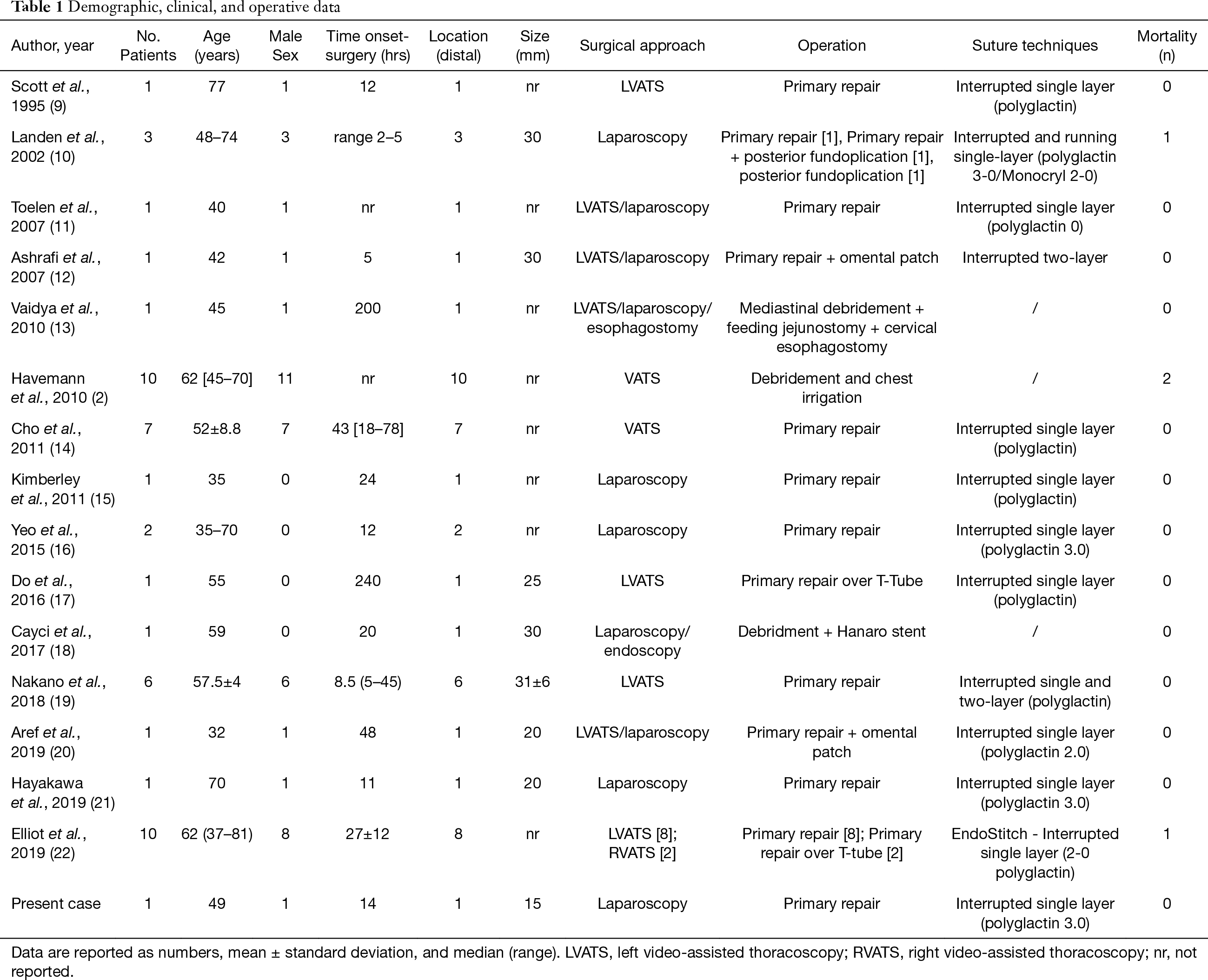 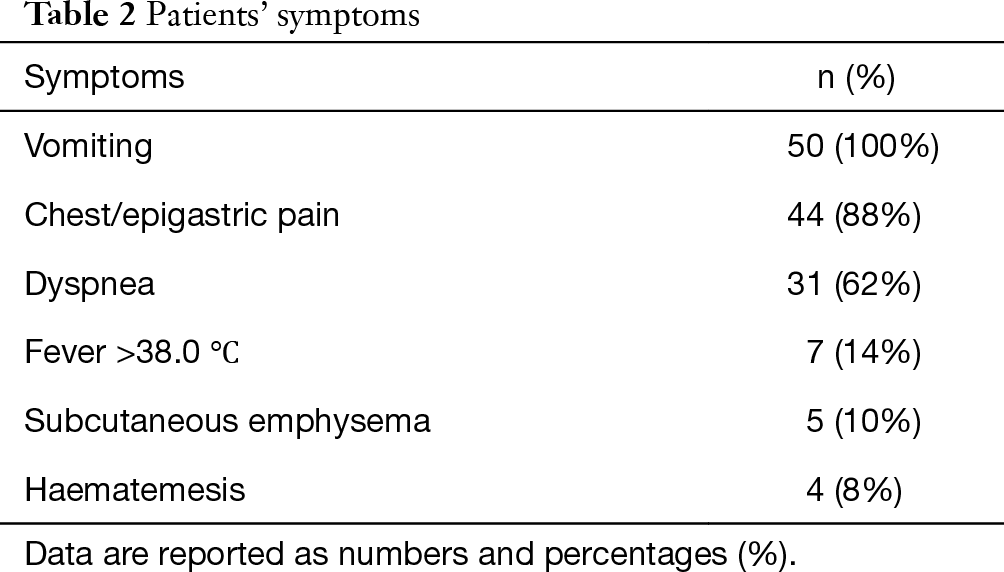 The perforation size was reported in eight studies and ranged from 6 to 30 mm. All studies reported the perforation location with 95.8% of patients suffering from distal esophageal tear. VATS was the most commonly reported surgical approach (75%), followed by laparoscopy (16.7%), combined thoraco-laparoscopy (6.2%), and endo-laparoscopy (2.1%). In case of thoracoscopy, a left approach was adopted in 91% of patients and a double lumen intubation with selective contralateral lung ventilation was adopted in all patients. 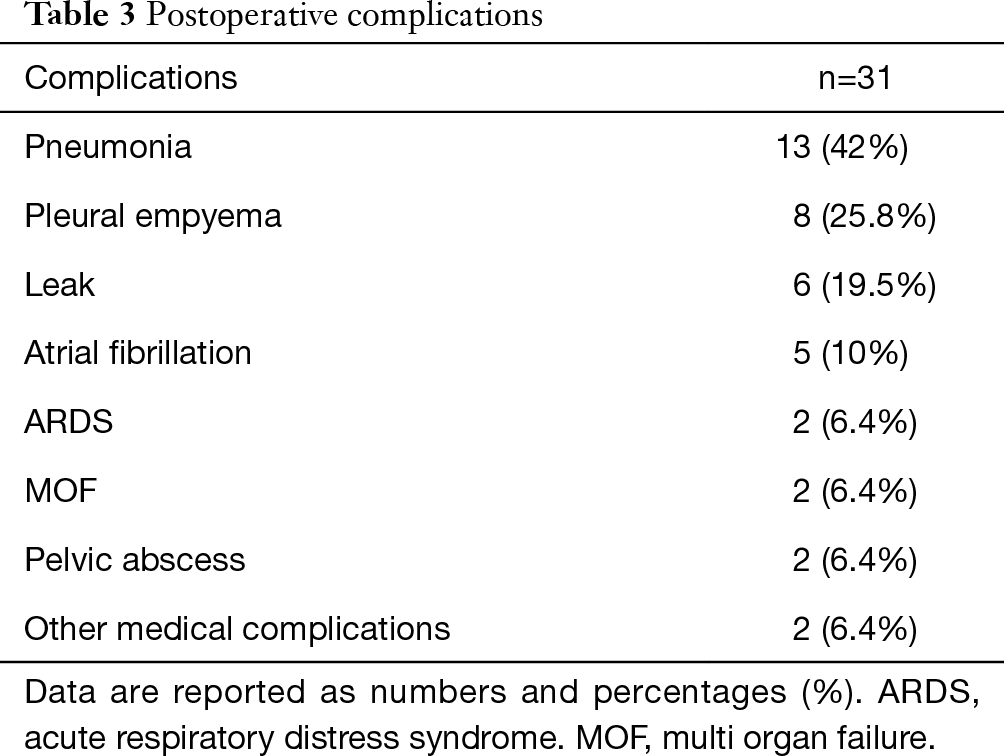 The management of Boerhaave’s syndrome remains a challenge while early diagnosis and prompt treatment are determinant for a successful outcome. It is commonly reported that the survival rate is significantly decreased when the diagnostic delay is longer than 24 hours (3). The choice of the most suitable approach should be guided upon the time of diagnosis, perforation severity and patient medical condition at presentation (22). It has been shown that the Pittsburg perforation Severity Score (PSS) may be a useful tool to stratify patients into low-, intermediate-, and high-risk groups (23). The mainstay of treatment is pleural and mediastinal debridement combined with esophageal repair and spillage prevention (24). Esophageal wall closure may be achieved via primary suture with patch reinforcement or over a T-tube drainage to create a controlled esophagocutaneous fistula (12-17). Major resection with or without primary reconstruction has been described but is matter of debate especially in defeated and septic patients (4). Endoscopic treatments have been proposed in selected patients with early diagnosis, no sepsis, and good tolerance to pleural contamination (24-26). Self-expandable stents, closing with OTSC or other clipping devices, vacuum therapy, Apollo Overstitch, through-the-scope fistula lavage, local antibiotics instillation, and naso-collection or double pig-tail internal drains have been reported with different success rates and related-complications (27-30). Therefore, endoscopic treatment should be left to referral centers and a robust algorithm with precise indication for endoscopic management is lacking (24).

The development of minimally invasive techniques in the setting of elective esophageal surgery has produced significant reductions in blood loss, postoperative complications, early recovery, better health-related quality of life, reduced pain, and improved 1-year functional scores, as compared to open surgery (7). However, the adoption of minimally invasive techniques in the emergency esophageal setting is highly discussed with few published studies and puzzled evidence on safety and effectiveness (31). In order to avoid a formal thoracotomy or laparotomy, a minimally invasive approach may be beneficial in minimizing operative surgical trauma, reduce postoperative pain, improve ventilation, and facilitate early mobilization (13,14,22). In addition, the magnified camera view ideally allows a better visualization of the visceral tears compared to conventional open surgery (10).

The most commonly reported symptoms were vomiting, chest/epigastric pain and dyspnea while seven patients (14%) had hypotension at diagnosis. Tolerance to systemic inflammatory response and surgeon experience in the field of minimally invasive esophageal surgery were probably determinant for deciding on minimally invasive repair (32). Cho et al. stated that a stable blood pressure, heart rate and SaO2 at diagnosis may be indications for thoracoscopic surgery in patients with Boerhaave’s syndrome. Therefore, a clear and definitive indication to adopt minimally invasive rather than open surgery is still lacking.

In the present study, the majority of patients were diagnosed with distal esophageal perforation and mostly managed via left video-assisted thoracoscopy (LVATS). Thoracoscopy may be useful to avoid a formal thoracotomy in case of pleural contamination and food debris spillage. Pleural debridement can be achieved by pleural scraping with aspirator or gauze pads. Pus, debris, and fibrinous debris can be aspirated, the pleural cavity irrigated, and the chest tube positioned under direct vision (14). Right thoracoscopic debridement in prone position has been also described (33). A laparoscopic transhiatal approach may be considered in case of limited pleural contamination when the mediastinal pleural has not been transgressed (10). This because the contaminated posterior mediastinum under the tracheal bifurcation is amenable to debridement and drainage via transhiatal laparoscopy. In addition, the distal esophagus is readily accessible and circumferentially exposed in case of posterior laceration (34).

Primary repair was the most commonly performed surgical procedure with both single and dual-layer repair. Some authors proposed primary suture in case of both early (<24 hours) and late perforations. Edematous, stiff, and friable wound edges make primary repair technically difficult and prone to leakage (2). Suture reinforced with flap or over a T-tube may be considered in attempt to reduce leak.

In accordance with previously published studies, the overall postoperative morbidity was 64% with pneumonia, pleural empyema and leak being the most commonly reported complications (22). The overall mortality rate was 8.3%. This may reflect the downward mortality trend of recent publications. Markar and colleagues in 2015 reported a 30% and 39% 30- and 90-day mortality in 2,564 patients including a significant amount of patients with Boerhaave syndrome (82%) (35). However, the recently published PERF study reported a 15% mortality rate among all-cause esophageal perforations, including 30% Boerhaave’s syndrome (36). Additionally, Haveman et al. and Elliott et al. reported a mortality rate of 8% and 10%, respectively (2,22). These improvements may be attributed to different factors such as increased centralization of care and advances in perioperative management (37). Finally, this effect may be ideally attributed to the effect of minimally invasive approach. However, a bias related to patient heterogeneity, preoperative selection, hospital volume-outcome, and single surgeon experience should be kept in mind as possible confounders.

Principal limitations of this narrative review are the relatively limited number of included patients, the possible background selection bias related to the heterogeneity of the included studies, and study methodological quality. Patients were treated in different centers with diverse expertise and surgical skills. In addition, the included population may represent a sub-selected cohort of patients. On the other hand, because the rarity of the disease, it is challenging to perform a large prospective study and a narrative review may represent an attempt to give a comprehensive and updated analysis on a specific topic (38). It is likely that with the increasing expertise in minimally invasive esophageal surgery, the application of such minimally invasive techniques in the setting of Boerhaave’s syndrome will likely increase.

Boerhaave’s syndrome is a rare entity. Minimally invasive treatment seems feasible and safe in selected patients with early presentation and stable vital signs managed in referral centers. In the management algorithm of spontaneous esophageal perforation, despite preliminary promising results, a clear and definitive indication to adopt minimally invasive surgery is lacking while its role is controversial and requires additional investigations.

Conflicts of Interest: All authors have completed the ICMJE uniform disclosure form (available at http://dx.doi.org/10.21037/jtd-20-1020). The authors have no conflicts of interest to declare.

Ethical Statement: the authors are accountable for all aspects of the work in ensuring that questions related to the accuracy or integrity of any part of the work are appropriately investigated and resolved.