The use of big data in healthcare may help to identify factors associated with clinical outcomes. The application of data-driven methods to healthcare data has improved our understanding of factors driving outcomes and their relationship with disease comorbidities. Big-data researchers should be able to easily acquire the necessary clinical data from a hospital’s information system to facilitate their research. In this study, we extracted the necessary clinical data from the Asan Biomedical Research Environment (ABLE) (14,15). Using these data, we evaluated spirometry results as independent risk factors for postoperative complications in thoracic and upper abdominal surgery.

We performed a retrospective analysis in the Asan Medical Center, a 2,704-bed, university-affiliated, tertiary referral hospital in Seoul. To protect patient privacy, comply with governmental regulations and facilitate research, Asan Medical Center has developed a biomedical research platform, ABLE. Patient medical record data have been stored since 2000, and the ABLE system extracts these data as categorical or continuous values. Comorbidity, smoking status and sex are extracted as categorical variables, and laboratory and spirometry data are extracted as continuous variables. Using this system, we could query patient data according to various conditions, such as date of surgery, surgical procedure or presence of spirometry data. Data cleansing was conducted using MySQL version 8.0.12 (Oracle, Cupertino, California, United States).

We included patients who underwent general surgery between January 2000 and December 2014 at Asan Medical Center and who had pulmonary function testing within the 3 months prior to their surgery. The following surgical procedures were included, coded by the International Classification of Diseases, Ninth Revision, Clinical Modification (ICD-9-CM): lung lobectomy (32.0–32.4), gastrectomy (43.4–43.9), hepatectomy (50.0–50.4) and pancreaticoduodenectomy (51.5–51.7, 52.7). If a patient underwent more than one operation during the admission period, we included only their first operation. If patients underwent complex surgical procedures such as hepatectomy combined with cholecystectomy or with enterostomy or other operations that did not meet our inclusion criteria, those surgical procedures were defined as additional operations.

The severity of lung function impairment based on FVC % predicted was categorized as follows: FVC >80% (control), FVC 50–80% (moderate impairment) and FVC <50% (severe impairment).

Our dataset did not include information about whether the index surgery was emergency or elective. However, we could identify whether patients were admitted to the ICU or a general ward. Surgery in patients who had been admitted to the ICU was defined as an emergency operation, because ICU admission indicated that patients had unstable vital signs or other serious conditions.

Laboratory data were recorded as continuous variables; values for creatinine and BUN had skewed distributions. We grouped the laboratory data to indicate their clinical significance as described in previous studies (9,18,19).

Some patients underwent postoperative care in the ICU. Usually, patients without any complications or unstable vital signs were discharged from the ICU within 2 days after surgery. Hence, we defined a prolonged ICU stay as >2 days. Another primary outcome was in-hospital death.

This study was approved by the ethics committee of the Asan Medical Center (approval number 2015-0656), and the need to obtain informed consent was waived because of the retrospective observational nature of the study. This study was conducted in accordance with the Declaration of Helsinki (as revised in 2013).

We included 31,827 patients who underwent thoracic or upper abdominal surgery between January 2000 and December 2014 and spirometry within the 3 months prior to their surgery. There were 514 patients with a history of physician-diagnosed COPD and 3,514 patients with airflow limitation. 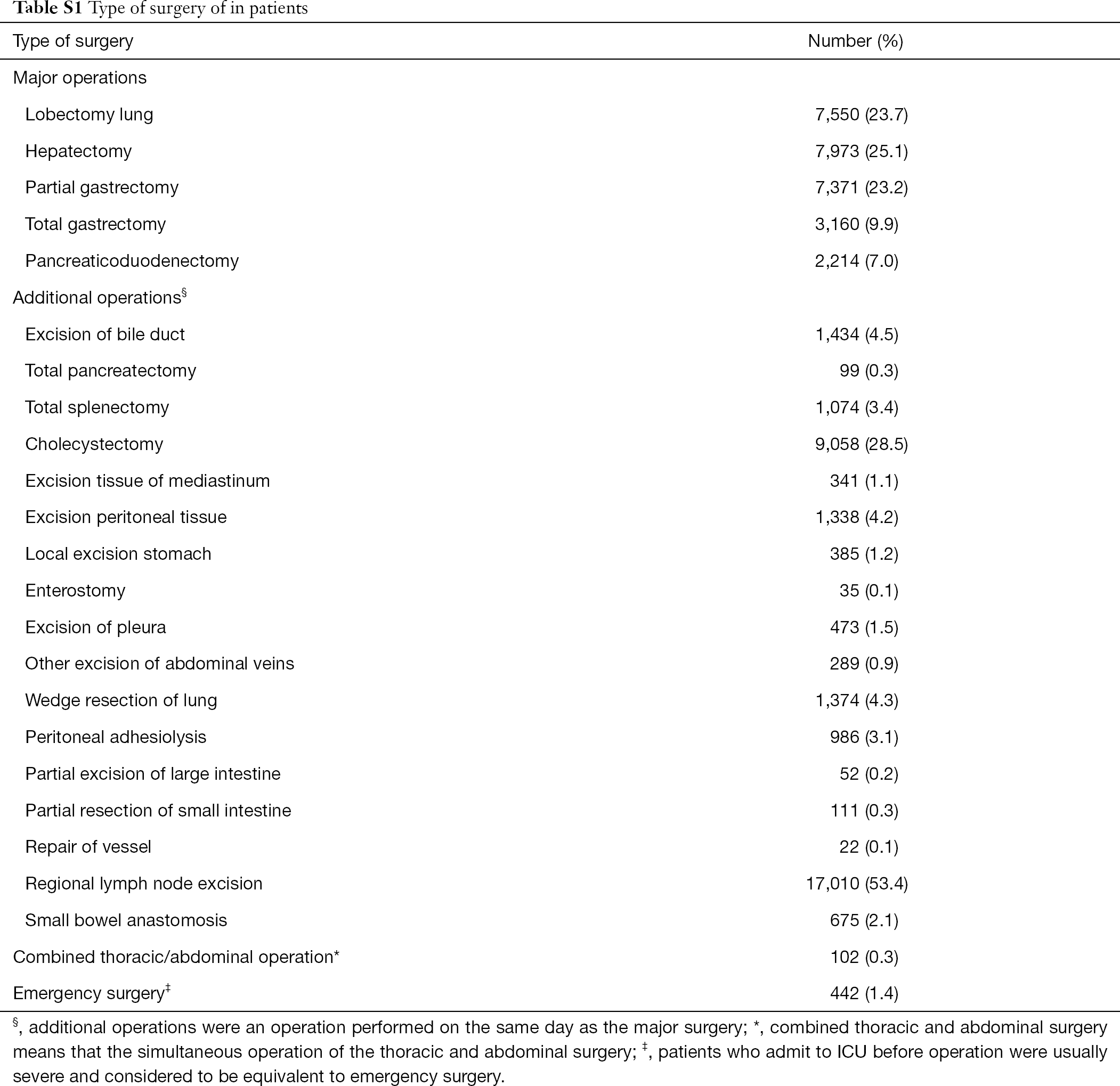 Table S1 Type of surgery of in patients
Full table

Spirometry and other risk factors for postoperative infection 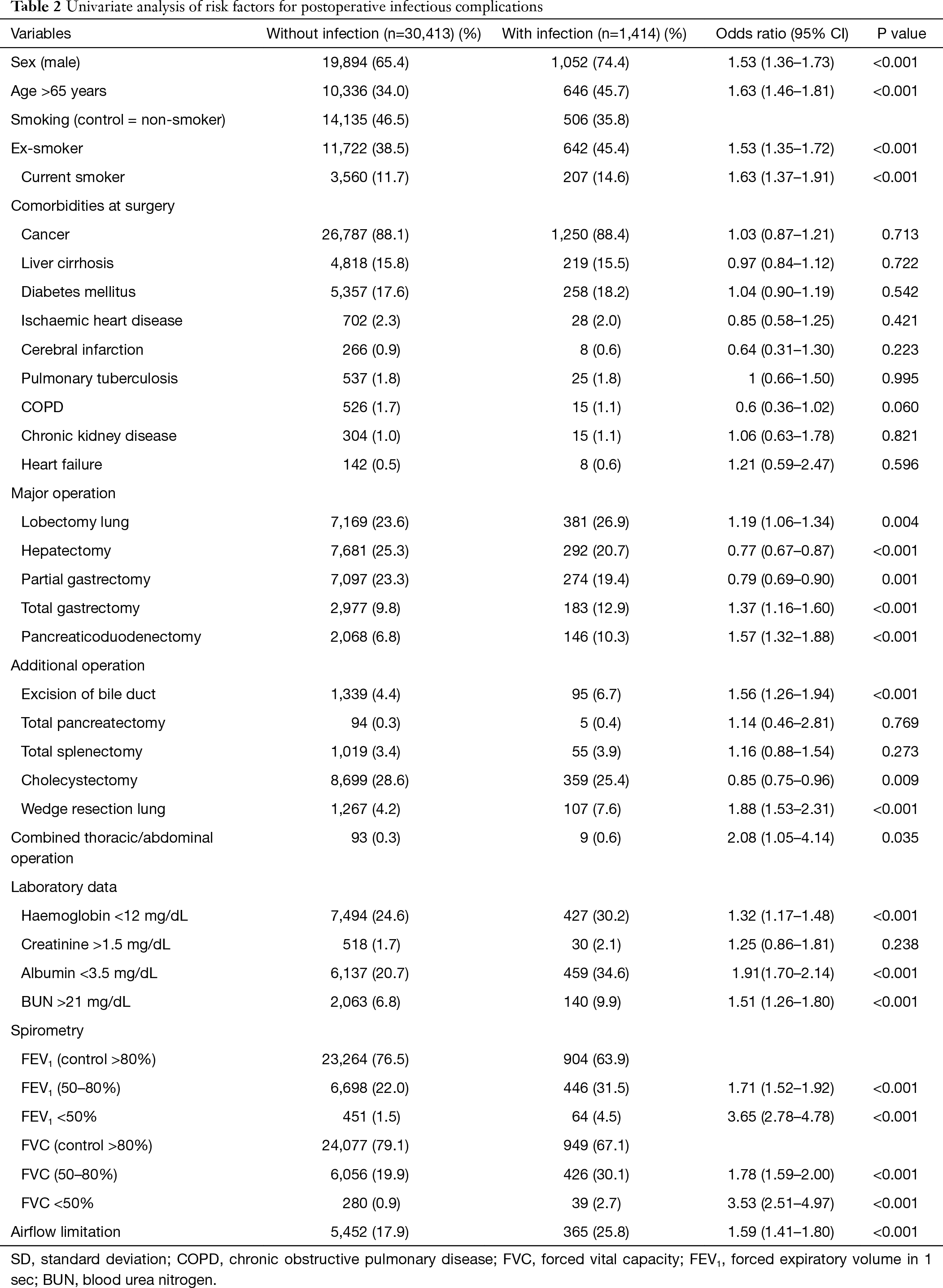 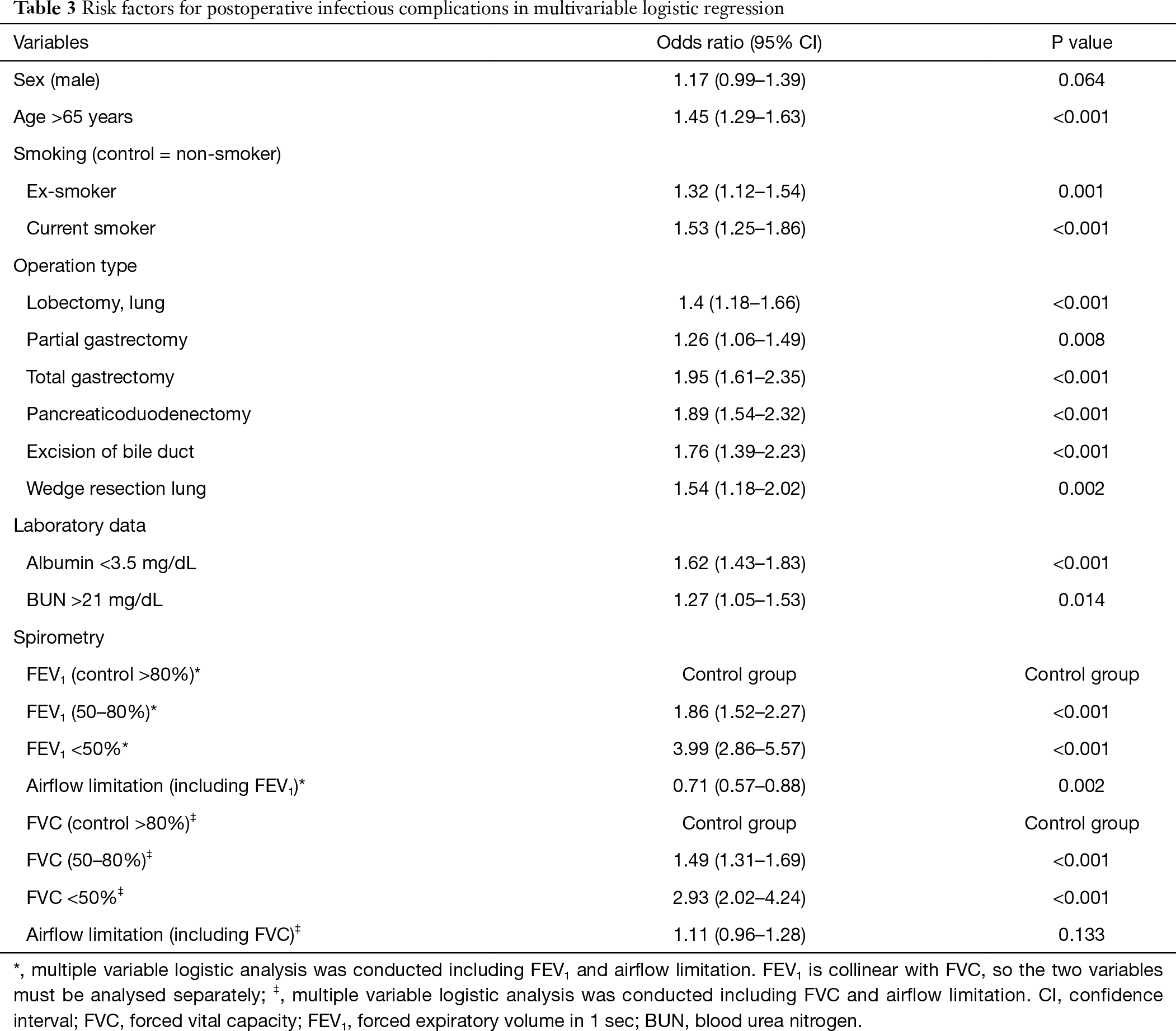 The overall rate of prolonged ICU care was 5.3%. Univariate logistic analysis showed that the type of operation and patient demographic data were associated with a prolonged ICU stay (Table S2). In multivariable logistic analysis, laboratory data (haemoglobin, creatinine, albumin, BUN), type of surgery, emergency surgery and grades of FEV1% predicted and FVC % predicted were independent risk factors for a prolonged ICU stay (Table 4). The OR of airflow limitation for prolonged ICU care was significant for FEV1 [OR, 95% CI: 0.68 (0.56–0.81)] but not for FVC [OR, 95% CI: 0.98 (0.85–1.13)]. In this model, the 95% CI of the AUC was 0.839–0.862. 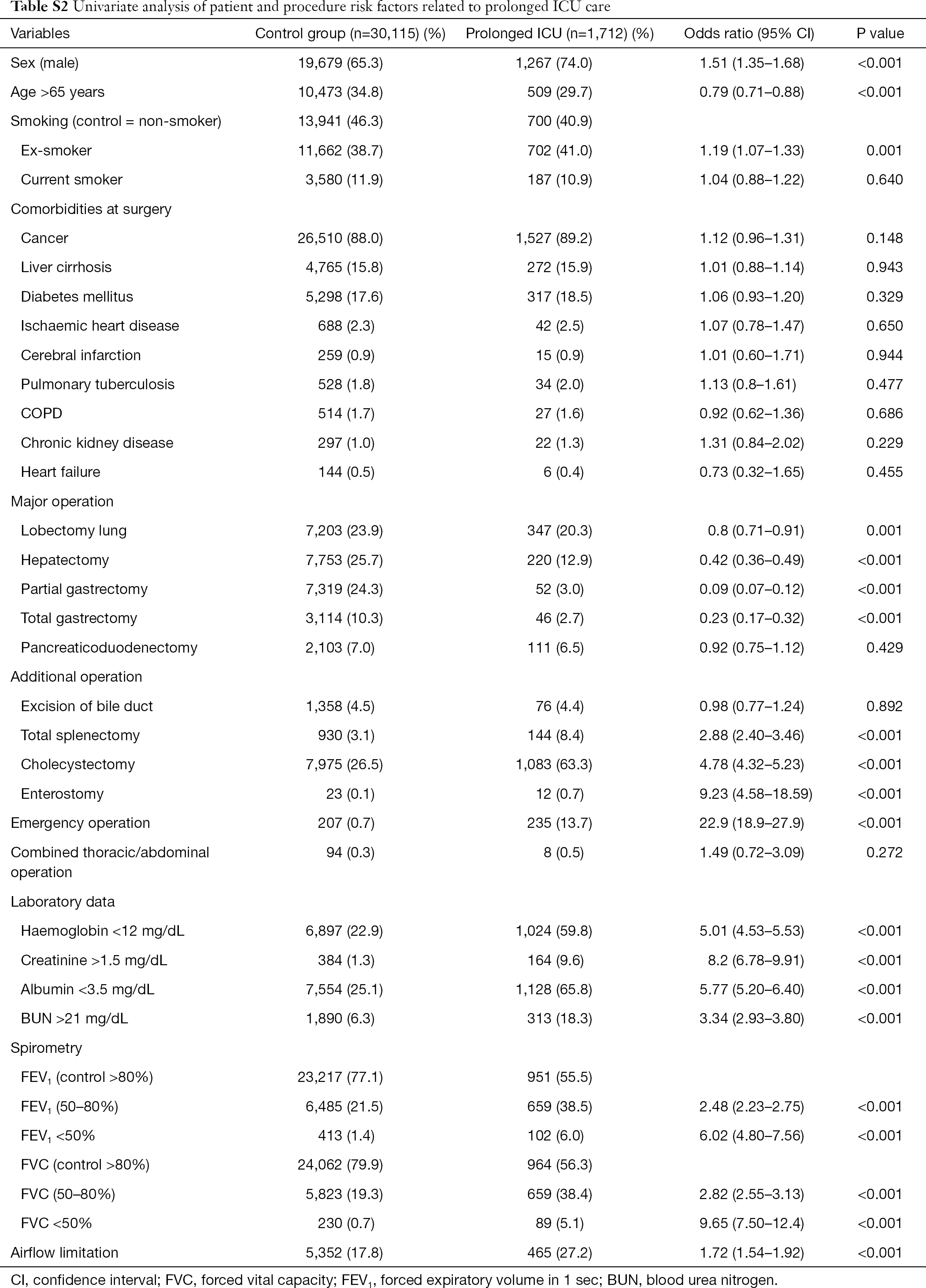 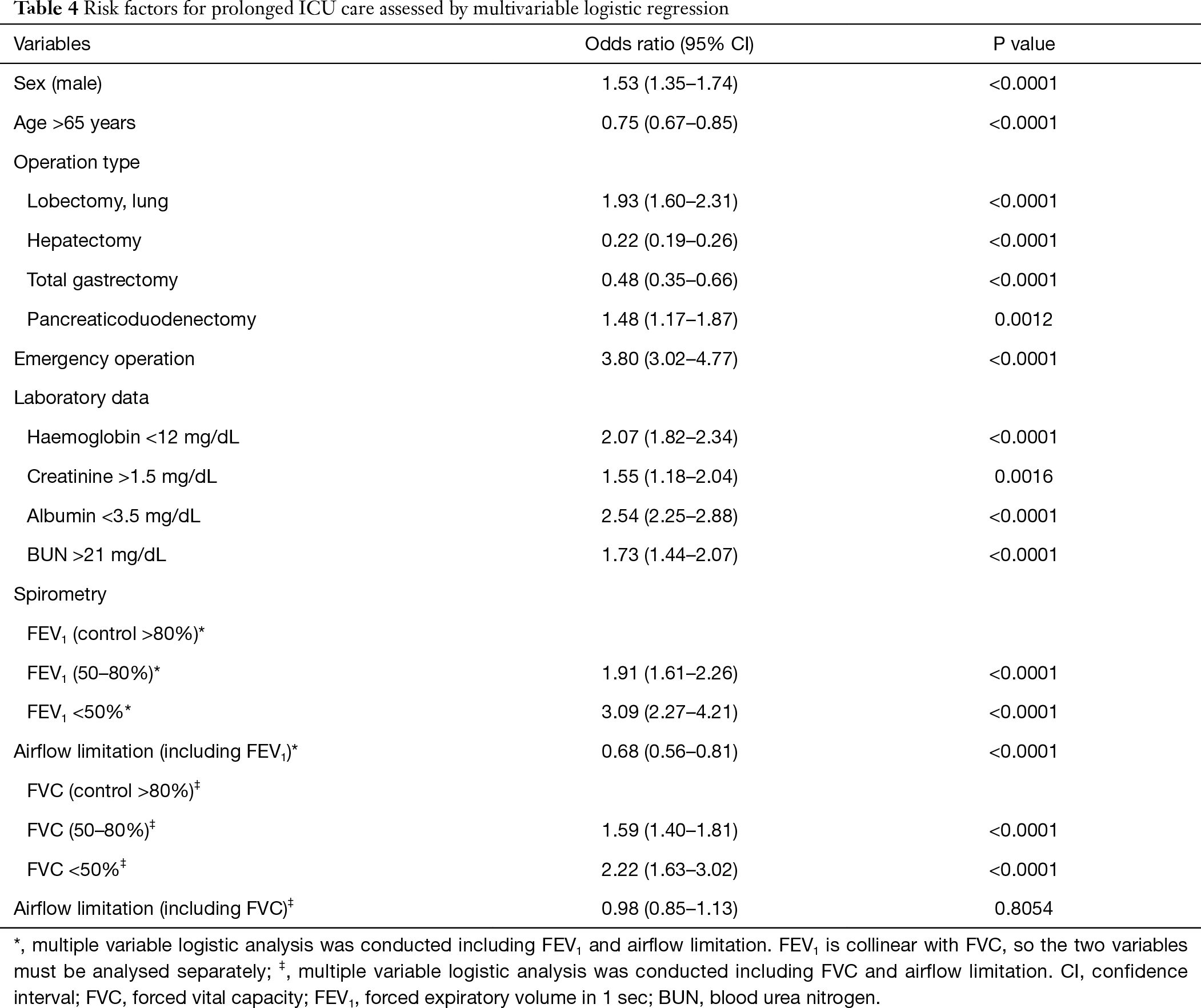 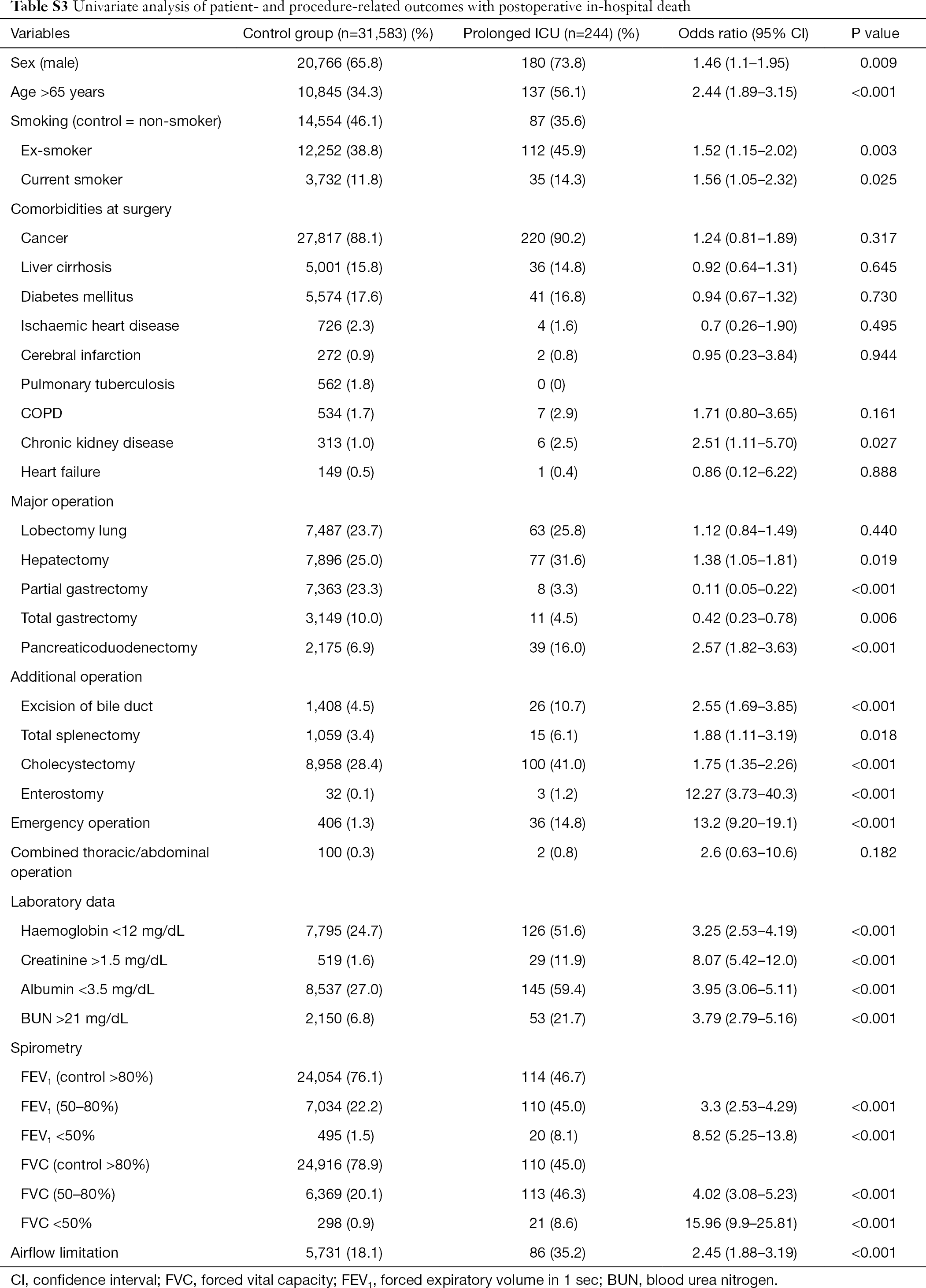 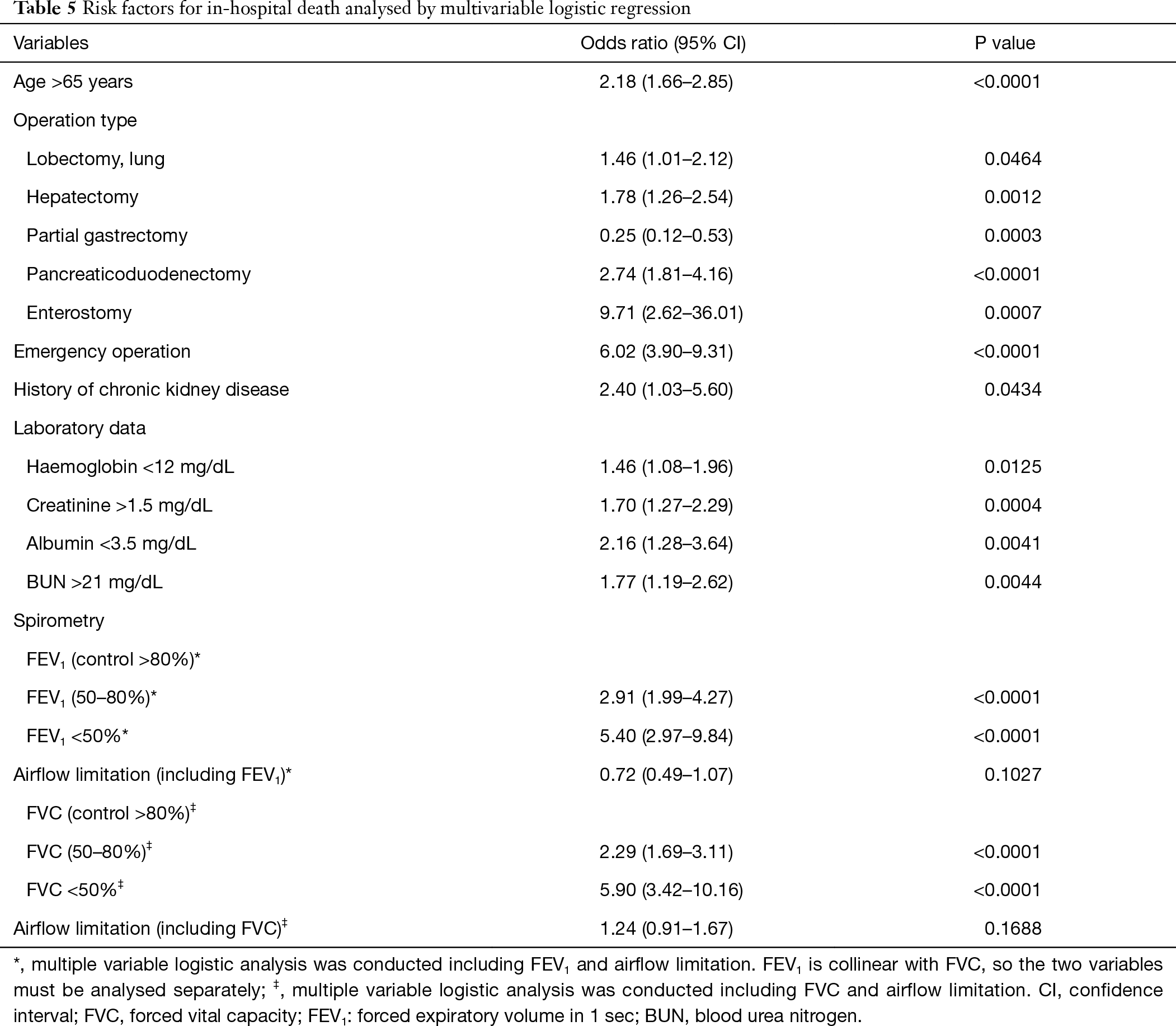 Spirometry is not recommended for patients undergoing nonthoracic surgery, except for those with preoperative asthma or COPD (24). Huh et al. support this recommendation because they found that preoperative spirometry results could not be used to stratify the risk of postoperative complications in older patients undergoing laparoscopic gastrectomy (25). Other studies have attempted to evaluate the predictive power of FVC or vital capacity for postoperative outcomes; however, FEV1 did not show a significant relationship with postoperative outcomes (12,13). In our study, the mean predicted FEV1 and FVC were 90.2 and 90.0, respectively, which were lower than those in previous studies. Over 20% of our patients were classified with moderate or severe airway limitation. Therefore, this study has greater strength than previous studies for evaluating the risk of lower FEV1 and FVC.

Shifting the definition of a variable between continuous and categorical may have clinical and statistical significance. In previous studies, patient age and laboratory data used to predict postoperative complications, such as creatinine, albumin and haemoglobin, were defined using varying cut-off values (10,18,19). The cut-off values chosen affect the descriptive power by changing the distribution of binary data. For outcome prediction, we used the most appropriate cut-off values based on the distribution of our data.

It was previously reported that emergency surgery was an independent risk factor for postoperative outcomes (2), with a more than fourfold higher risk of postoperative complications compared with elective surgery. Our electronic medical record system did not allow us to distinguish emergency from elective surgery. However, we assumed that admission to ICU before surgery had the same degree of risk as an emergency operation and found that presurgical ICU care was a risk factor for prolonged ICU stay and in-hospital death.

This study had some limitations. First, we defined postoperative infection based on antibiotic use. Identification of postoperative infections such as pneumonia or surgical site infection requires clinical judgement. However, patients infected after surgery should be treated with antibiotics, and the overall incidence of postoperative complications in our study was similar to those in previous studies (32-34). Thus, it is reasonable to assume that this factor has clinical significance. Second, there is some uncertainty regarding the clinical data because the patient’s history of comorbidity and the procedure code were often omitted or miscoded. In the future, natural language processing could be used to identify a history of comorbidity from the descriptive electronic medical records.

In conclusion, this study confirmed that FVC is a useful indicator of postoperative complications, regardless of airflow limitation.

The authors would like to thank the ABLE team for accessing the electronic medical records for this study.

Conflicts of Interest: All authors have completed the ICMJE uniform disclosure form (available at http://dx.doi.org/10.21037/jtd-19-2687). CMC serves as an unpaid editorial board member of Journal of Thoracic Disease from Oct 2019 to Sep 2021. The other authors have no conflicts of interest to declare.

Ethical Statement: The authors are accountable for all aspects of the work in ensuring that questions related to the accuracy or integrity of any part of the work are appropriately investigated and resolved. This study was approved by the ethics committee of the Asan Medical Center (approval number 2015-0656), and the need to obtain informed consent was waived because of the retrospective observational nature of the study. This study was conducted in accordance with the Declaration of Helsinki (as revised in 2013).