Oesophageal cancer was identified as the leading cause of cancer-related death in China. Oesophageal cancer has two main subtypes, oesophageal squamous cell carcinoma (OSCC) and oesophageal adenocarcinoma (1). OSCC accounts for 90% of the cases of oesophageal cancer (2). Neoadjuvant chemotherapy (NAC) is the most common treatment approach for patients with resectable oesophageal cancer. The results of meta-analyses indicated that NAC significantly reduced the 3-year mortality and locoregional recurrence rates when compared with surgery alone (3,4). Clinical evidence indicated that 19% of patients randomly assigned to receive chemotherapy had major objective regressions (7% complete radiographic regression and 12% partial radiographic regression) (5). For non-responsive patients, there is a risk of disease progression and a loss of the chance for surgery. Therefore, determining how to select patients who should receive NAC is a vital clinical problem.

Recently, to avoid invasive and repeated tissue biopsies, the analysis of circulating cell-free DNA (cfDNA) was applied for screening, diagnosis, predicting response to therapy, monitoring the tumour burden and early diagnosis of relapse (6-8). Hsieh et al. reported that circulating cfDNA could predict the outcome of OSCC patients undergoing oesophagectomy. Higher cfDNA levels were associated with tumour relapse and shorter disease-free survival (DFS) after oesophagectomy in OSCC patients (9). This study aimed to explore the plasma DNA mutation profile in OSCC patients who responded and those who did not respond to NAC and to screen for molecular biomarkers to predict the efficacy of neoadjuvant chemotherapy.

We present the following article in accordance with the REMARK Guideline.

To investigate the impact of NAC on the survival of patients with operable advanced OSCC, we registered a clinical study in ClinicalTrails.Gov (NCT02395705). The clinical study has been enrolled and follow-up has not been completed, so there is no median follow-up data for the above cases. All the patients in this retrospective study were from the patients enrolled in the above clinical study. In this retrospective analysis, 22 stage IIA to IIIB OSCC patients were recruited from the Affiliated Cancer Hospital of Zhengzhou University (Henan Cancer Hospital) between April 2015 and July 2016 according to the inclusion criteria. All subjects received NAC and were stratified in two clinical response groups. Seven cases reached progressive disease (PD) or stable disease (SD), and 15 cases reached partial response (PR) or complete response (CR). This study aimed to screen for molecular biomarkers to predict the efficacy of NAC by exploring the plasma DNA mutation profile in OSCC patients between responders and non-responders.

❖ Patients must not have received any prior anticancer therapy for oesophageal cancer;

❖ Patients must not have been diagnosed with other cancer and must not have received any prior anticancer therapy except for prostate cancer with greater than 5 years of DFS;

❖ No metastatic lymph node in cervical by color Doppler sonography.

❖ Patients who cannot undergo the operation for any unexpected reason;

❖ Inability to use gastric conduit after esophagectomy due to a prior surgery;

❖ Patients are diagnosed as or suspected to be allergic to cisplatin or paclitaxel.

The investigators took the responsibility to enroll the patients. First, the eligibility criteria are confirmed. Second, patients are randomized to the NAC or surgery alone group.

The randomization numbers were generated by a centrally located computer. Patients were randomly assigned (1:1). All the randomized numbers were sealed into envelopes and sent to local sites. After the patient signs the written consent form, the envelope is opened, and the randomized group is unsealed. The trial is unmasked.

The paired-end sequencing was performed by Illumina HiSeq X-Ten. The hg19 reference genome was used for read mapping with BWA 0.7.12 (default parameters). Resulting alignments were sorted, filtered and indexed using SAMtools. In order to distinguish somatic single nucleotide polymorphism (SNP) from indel mutations, the obtained BAM files from both blood cell and plasma samples for each patient were processed for pairwise variant calling using VarScan (v2.4.2). For each patient, a so-called pair-wise variant calling procedure was employed, using a blood cell sample as normal control to help eliminate germline mutations in the corresponding plasma samples. In blood cell samples, somatic variants were called based on a minimum coverage of 8, and in plasma samples it was 6. The P value threshold to call a somatic site was 0.05, and variants with ≤90% strand bias were kept for further study. The refGene and Exome Aggregation Consortium database were included in Annovar packages, and the Annovar packages were used for variant annotation to obtain population and gene region information. Finally, non-synonymous mutations in exon regions were retained. The mutation burden of each patient was defined as the average mutation allele frequency of each gene calculated by the obtained somatic mutation.

Patients’ blood cell samples were used to construct copy number baseline which were used as a negative control. CNVkit was used to call copy number variation (CNV) from the plasma samples for each patient. Three main sources of bias, the GC content, target footprint size and spacing, and repetitive sequences, which can induce the extraneous variability of sequencing read depth were evaluated and corrected as well.

This work was conducted in accordance with the Declaration of Helsinki (as revised in 2013) and approved by Ethics Committee of the Affiliated Cancer Hospital of Zhengzhou University (Henan Cancer Hospital) (NO.: 2014ys38) and informed consent was taken from all the patients.

A total of 22 patients with OSCC were recruited for the study from the Affiliated Cancer Hospital of Zhengzhou University (Henan Cancer Hospital) between April 2015 and July 2016. Table 1 summarizes the clinical characteristics of the patients. All subjects received NAC and were divided into two groups according to their response to the therapy. Fifteen patients were in the response group, and seven patients were in the non-response group. The cfDNA concentrations were not significantly different between patients who responded and patients who did not respond to NAC (Table 1). 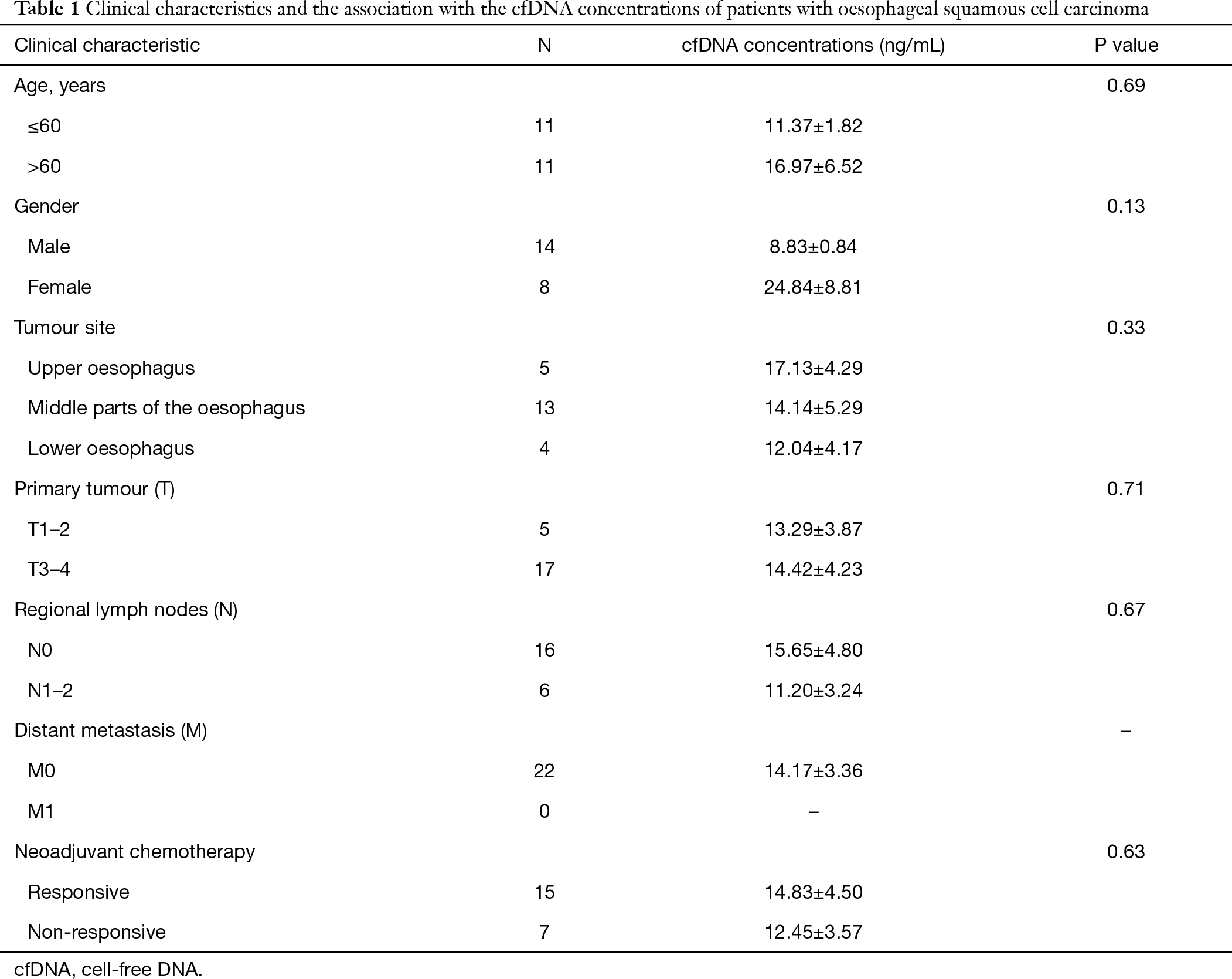 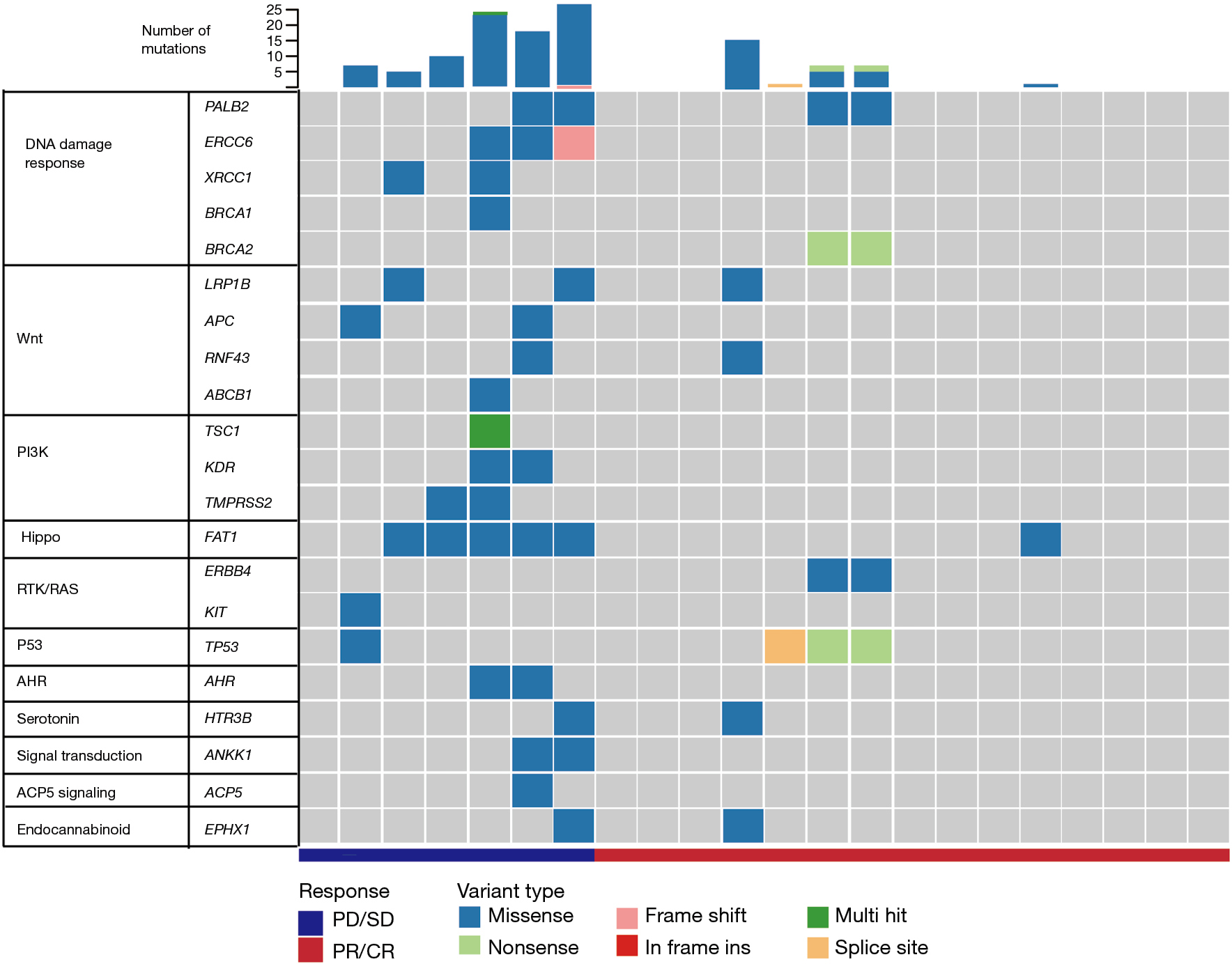 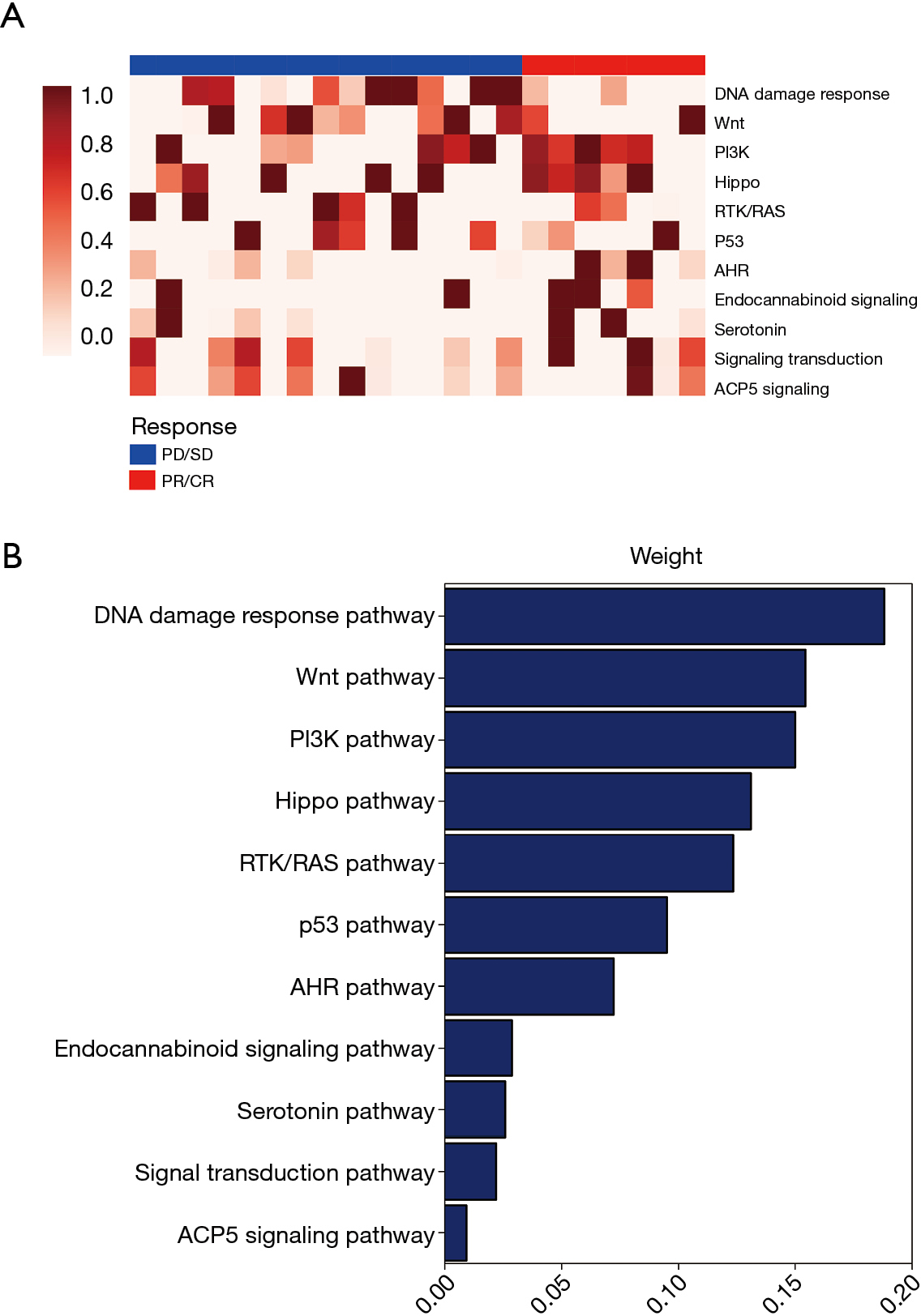 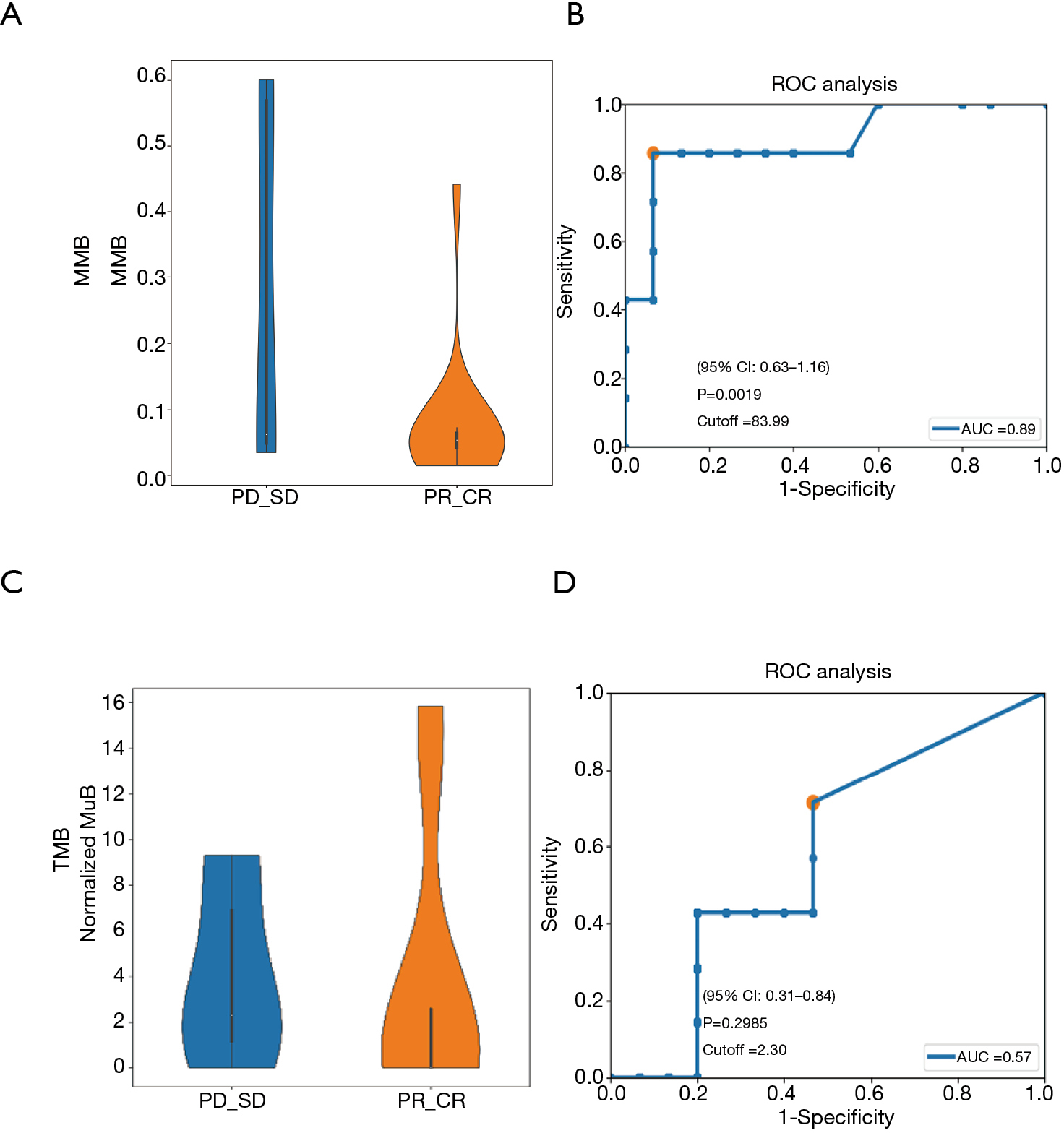 We further investigated the CNV pattern of OSCC patients. The cfDNA and the genomic DNA extracted from white blood cells were analysed in parallel to identify somatic CNVs. We identified 22 genes with CNV patterns that could distinguish patients who responded to NAC from those who did not respond (Figure 4A). Principal component analysis (PCA) showed that the cfDNA CNV profile was different between the baseline cfDNA in patients who responded and patients who did not respond to NAC (Figure 4B). The 22 genes were ranked in order of decreasing importance (Figure 5A). The cfDNA CNVs had an area under the ROC curve of 1.0 for predicting the response to NAC (Figure 5B).

Figure 5 The predictive value of the baseline CNVs to predict the response to neoadjuvant chemotherapy. (A) The differential CNVs of the driver genes between the responsive and non-responsive patients; (B) the ROC curve of the CNVs (AUC =1.00, P=0.000). ROC, receiver operation characteristic curve; CNV, copy number variation.

Previous studies have focused on investigating the cfDNA levels as predictive biomarkers for tumour relapse and distant metastasis after oesophagectomy in OSCC patients (9). Few studies have explored the plasma cfDNA molecular profiles of OSCC patients who received NAC. In the current study, we found differences in the molecular alterations between OSCC patients who were responsive and non-responsive to NAC. We found that the differential MMB score affected the DNA damage response, Wnt pathway, PI3K, Hippo pathway, RTK/RAS pathway, p53 pathway, and AHR pathway.

Several studies reported the predictive value of biomarkers for predicting the response to NAC (12,13). According to our data, compared with patients who were non-responsive to NAC, OSCC patients who responded to NAC had a low driver gene MMB at baseline. The MMB had an area under the ROC curve of 0.89 for predicting the response to NAC. In contrast, higher blood TMB levels were observed in the responsive group. The difference between the TMB and MMB may be explained as follows. The TMB was defined as the number of somatic mutations per megabase of the tumour genome examined. It may therefore be speculated that a tumour bearing a higher TMB level may be highly immunogenic and may induce an anti-tumour immune response, leading to a good clinical prognosis. However, the MMB was defined as the sum of the mean variant allele frequency (VAF). The VAF for each somatic mutation was calculated as its variant supporting reads divided by the reference supporting reads. Thus, the TMB may show the overall number of somatic mutations per megabase of the tumour. The MMB showed the individual gene molecular alteration burden of the tumour.

CNV, a type of structural variation, was characterized as a duplication or deletion event that was observed in OSCC patients. The implications of CNVs for the treatment and prediction of OSCC patients’ clinical outcomes are currently underappreciated. In this study, PCA analysis showed that the cfDNA CNVs were different between the baseline cfDNA in patients who responded and patients who did not respond to NAC. The cfDNA CNVs had an area of 1.0 under the ROC curve for predicting the response to NAC. These results suggest that the CNV might be used as a biomarker to predict the response to NAC.

In this study, we explored a candidate model to predict the response to NAC based on the baseline cfDNA driver gene MMB and CNV. This model achieved good sensitivity and specificity. However, a prospective cohort study should be designed to validate the clinical predictive value.

Funding: This work was supported by grants from the Medical and Health Technology Innovation Project of Chinese Academy of Medical Sciences (2018-12M-3-003) (Spatial-Temporal Mapping Analysis on Chinese Cancer Burden) and National Key Sci-Tech Special Project of China (No. 2018ZX10302207).

Conflicts of Interest: All authors have completed the ICMJE uniform disclosure form (available at http://dx.doi.org/10.21037/jtd-20-230). The authors have no conflicts of interest to declare.

Ethical Statement: The authors are accountable for all aspects of the work in ensuring that questions related to the accuracy or integrity of any part of the work are appropriately investigated and resolved. This work was conducted in accordance with the Declaration of Helsinki (as revised in 2013) and approved by Ethics Committee of the Affiliated Cancer Hospital of Zhengzhou University (Henan Cancer Hospital) (NO.: 2014ys38) and informed consent was taken from all the patients.