Association between blood eosinophils with exacerbation and patient-reported outcomes in chronic obstructive pulmonary disease patients in an endemic area for parasitic infections: a prospective study

Chronic obstructive pulmonary disease (COPD) is a common disease that is characterized by persistent respiratory symptoms and airflow limitation due to abnormalities of the airway or alveoli or both (1). From previous studies, about 10−40% of COPD patients have eosinophilic airway inflammation during stable disease and exacerbations (2-4). These eosinophilic COPD patients respond well to corticosteroid therapy (5-8).

A prospective cohort study was conducted in Songklanagarind Hospital, Thailand from December 2017 to December 2018. Eligible cases included stable COPD patients who came for follow-up at the outpatient department and were diagnosed as COPD according to the criteria described in the Global Initiative for Chronic Obstructive Lung disease (GOLD) guideline 2017 (11). The excluded participants were: (I) patients who had other conditions which could cause eosinophilia (12) {i.e., known parasitic infection, allergy, asthma or asthma COPD overlap according to the Global Initiative for Asthma [2017] guideline (13), autoimmune disease, adrenal insufficiency, hematologic malignancy, or receiving medication which could cause eosinophilia}; (II) patients who had previous acute exacerbation within 30 days before study entry; and (III) patients who had previous systemic corticosteroid therapy within 30 days before study entry. This study was conducted in accordance with the Declaration of Helsinki (as revised in 2013). This study was reviewed and approved by the Office of Human Research Ethics Committee at the Faculty of Medicine, Prince of Songkla University, Thailand (REC.60-319-14-3).

All patients who were included in our study met the inclusion criteria and signed informed consent forms. At the screening period, stool specimens from each patient were collected three times and examined for parasites. Patients who had parasitic infections were excluded from the study. Complete blood counts were performed two times in all of the included patients and analyzed in a central laboratory at the time of study entry and 30 days after study entry to prevent variability. The means of the blood eosinophil counts were calculated and the patients were assigned into either the eosinophilic or non-eosinophilic COPD group. Eosinophilic and non-eosinophilic COPD were defined as blood eosinophil counts at the time of study entry as ≥300 and <300 cells/µL, respectively (16).

Baseline demographics and characteristics of all patients, including COPD GOLD assessment group, GOLD airflow limitation severity, smoking status, body mass index, modified Medical Research Council (mMRC) dyspnea score, and exacerbation rate in the previous year, were collected by the original investigator at the baseline visit. An exacerbation of COPD was defined by a new onset of two or more events of dyspnea, coughing, increased sputum production or chest tightness that led to a change in treatment with systemic glucocorticoids or antibiotics for at least 3 days (11). The severity of the exacerbation of COPD was classified as mild (which required an increased dosage of a short acting beta-2-agonist), moderate (which led to a visit to an emergency department), and severe (which led to hospitalization). The exacerbation rates were recorded during the entire study period, whereas all patient symptoms, COPD Assessment Test (CAT) score, spirometry results, hospitalization, lengths of hospital stay, and mortality were collected at the scheduled visit of 12 months. All patients were also followed up as scheduled with their primary doctors.

Descriptive data are presented as mean ± SD, median (IQR), and number with percent (%) based on the type of data. Continuous data are presented as mean ± SD or median (IQR), difference in data used the t-test whereas categorical data are presented as number and percentage. Differences in data used the chi-square test and Fisher’s exact test. COPD exacerbation rates were compared by Fisher’s exact test. The rank-sum test was used to demonstrate the relationship between the blood eosinophil counts and exacerbation rates. The predicting factors were determined by multivariate logistic regression (adjusted for age, sex, BMI, smoking, FEV1, mMRC) and presented with adjusted odd ratios. We also determined a receiver operating characteristic curve (ROC) analysis to evaluate the optimal cut-off value of blood eosinophil count. The statistical analysis used the R 3.5.2 software and the results were considered statistically significant if the P value was <0.05.

One hundred and sixty-five COPD patients were screened and a total of 145 patients were assigned into the two groups based on the blood eosinophil counts. Fifty-eight (40%) and 87 (60%) patients were assigned to the eosinophilic and non-eosinophilic groups, respectively (Figure 1). Demographic and clinical characteristics at the time of study entry are presented in Table 1. One hundred and thirty-seven (94.5%) patients were men and the mean age was 73.9±9.7 years old. The mean post-bronchodilator FEV1 (% of predicted) was 53.1±11.8 and the median annualized exacerbation rate in the previous year before study entry, was 1 time per year (P=0.239). There were no differences in the baseline characteristics between the two groups. The baseline median eosinophil count of all patients was 242.5×109 cells/L. The median eosinophil counts in the eosinophilic and non-eosinophilic COPD groups were 481 (378.5, 675) and 149 (101.2, 208) ×109 cells/L, respectively. 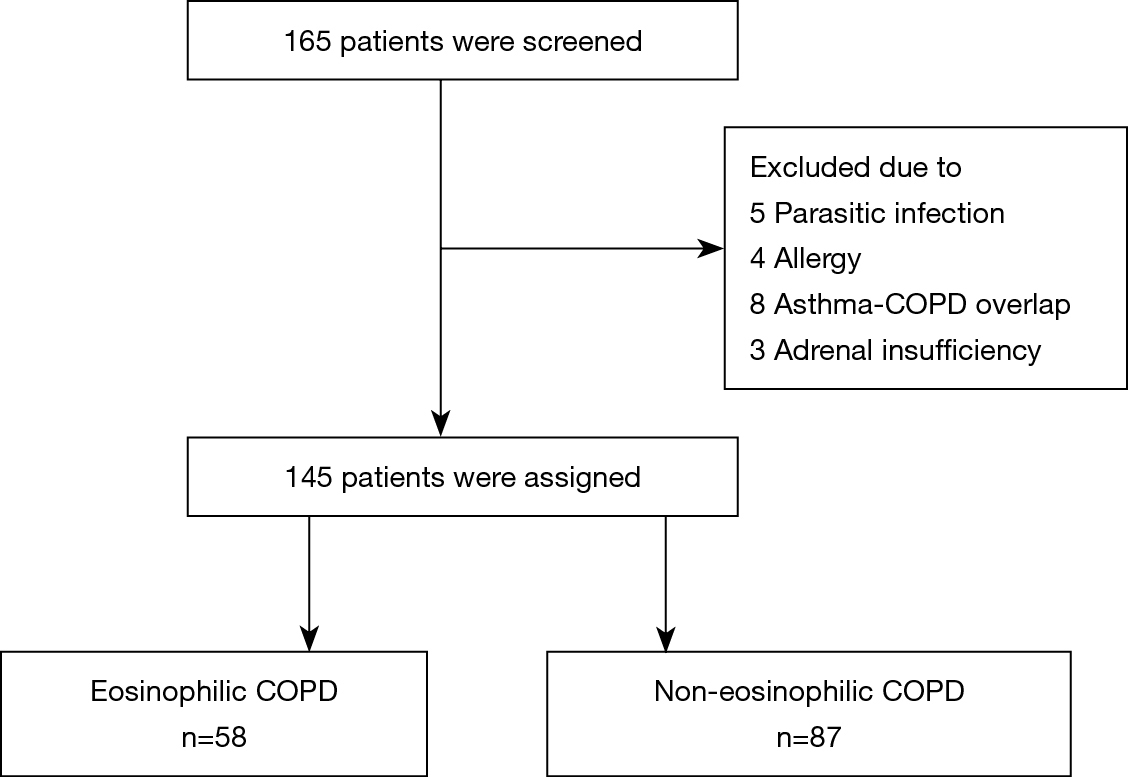 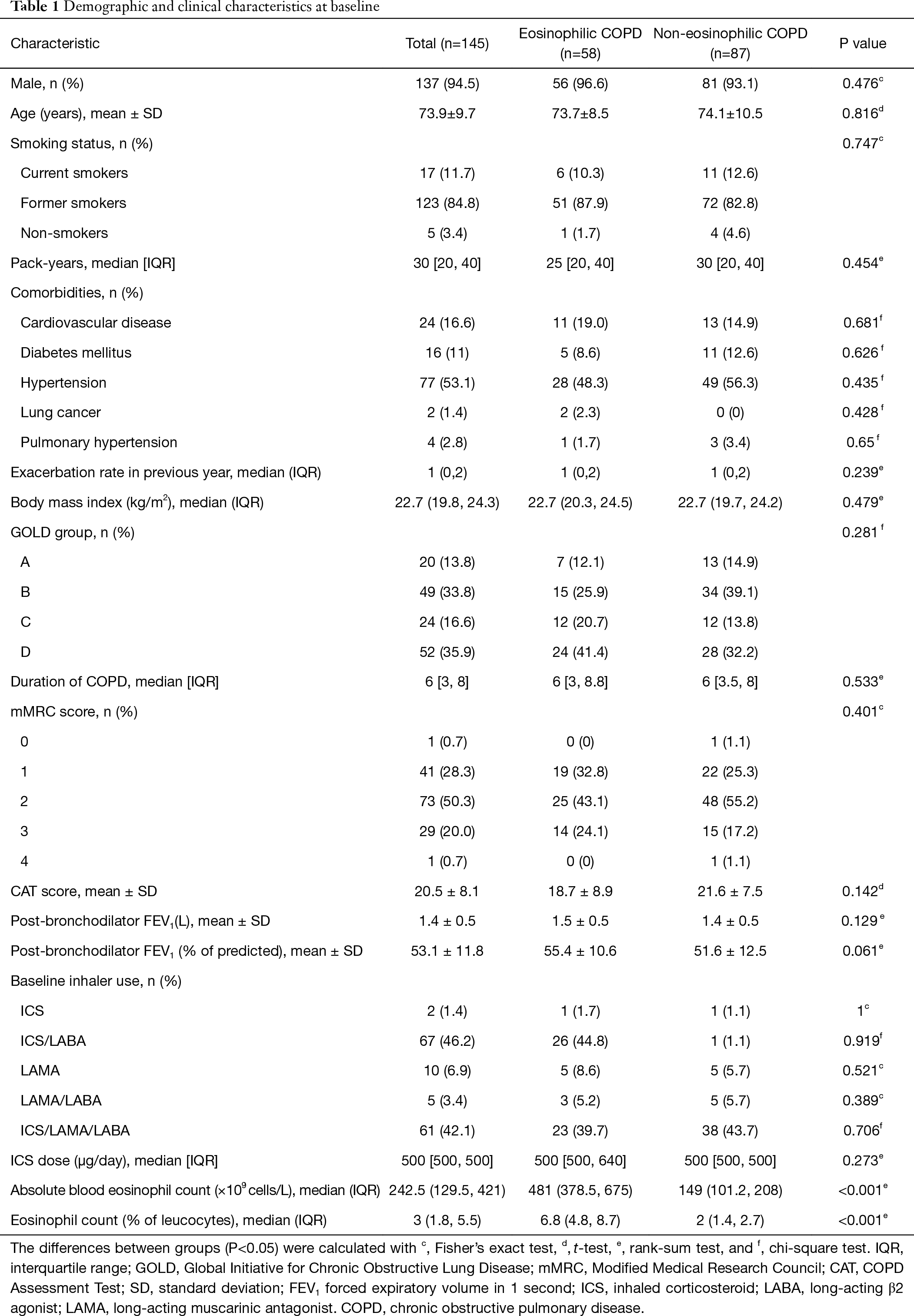 The number of admissions within 12 months was significantly higher in the eosinophilic group compared to non-eosinophilic group (P=0.007). However, other clinical outcomes, such as length of hospital stay, or respiratory support by either non-invasive or invasive mechanical ventilation, were not statistically significantly different between the two groups (Table 2).

Other patient-reported outcomes such as mMRC dyspnea score, CAT score, and spirometry results after 12 months were not statistically significantly different between the two groups (Table 3). After the 12-month follow-up, higher mortality occurred in the non-eosinophilic group (P=0.041) where three patients died from pneumonia, acute myocardial infarction, and lung cancer. All of them received inhaled corticosteroid therapy whereas no deaths occurred in the eosinophilic group. 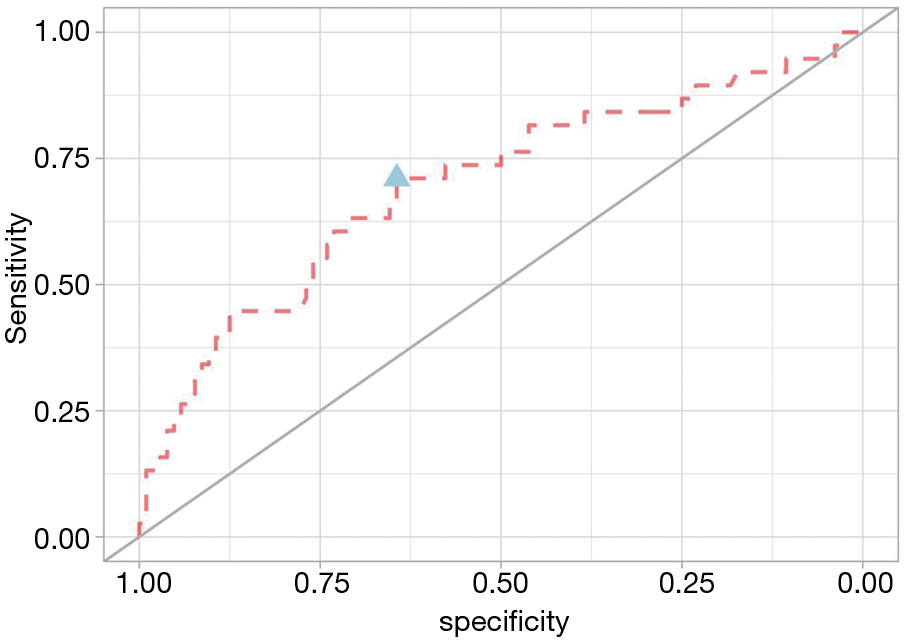 Our results found that in a highly endemic area for parasitic infection, a blood eosinophil count ≥300 cells/µL in COPD patients had more frequent exacerbations and a higher number of hospital admissions than the non-eosinophilic patients. However, mortality was significantly higher in the non-eosinophilic COPD patients. There were no other differences in the patient-reported outcomes between the two groups except the number of admissions into the hospital. The blood eosinophil count and CAT score were significant predictive factors of COPD exacerbation with adjusted odds ratios of 3.91 and 1.11, respectively.

In our study, COPD patients with high blood eosinophil counts had more exacerbations, more admissions, and lower mortality than the non-eosinophilic patients. Our hypothesis for the lower mortality was eosinophilic COPD patients are associated with increased corticosteroid responsiveness. Ho et al. (19) conducted a meta-analysis of outcome measures that compared eosinophilic and non-eosinophilic COPD patients. That study reported higher eosinophil counts in an outpatient sub-group which demonstrated increased risk of COPD exacerbation by 18%. Couillard et al. (20) reported that eosinophilia in a Western country was associated with an increased risk of 12-month COPD-related readmission, 12-month all-cause readmission, and a shorter time to first COPD-related readmission. In this current study, however, the length of stay was not statistically different between the eosinophilic and non-eosinophilic patients. A previous study was conducted in an Asian population by Barnes et al. (21) Among the Japanese patients, the median (IQR) absolute eosinophil count was 170 cells/mm3 (100–280 cells/mm3) which was similar to non-Japanese patients. However, no difference was observed in the proportions of Japanese or non-Japanese patients with a prior history of COPD exacerbations between the <2% and ≥2% eosinophil count subgroups, which was different from our study.

The strengths of our study were: (I) the prospective study design; (II) the first study in a highly endemic area for parasitic infection which could interfere with the correlation of a high blood eosinophil count in COPD patients; (III) follow-up period of 12 months; and (IV) other common causes of eosinophilia were excluded before enrollment. The limitation of this study was that most of the patients in this study were followed at the chest clinic where the patients were treated by pulmonology fellows and staff personnel. Therefore, the exacerbation rates per year might be lower than reported in other studies.

In conclusion, a blood eosinophil count equal to or greater than 300 cells/µL can be an effective biomarker to predict exacerbation risk in COPD patients in a highly endemic area for parasitic infection. A larger number of patients and longer study duration of eosinophilic COPD should be done in the future to help guide the appropriate treatments in COPD patients.

Conflicts of Interest: All authors have completed the ICMJE uniform disclosure form (available at http://dx.doi.org/10.21037/jtd-19-4101). The authors have no conflicts of interest to declare.

Ethical Statement: The authors are accountable for all aspects of the work in ensuring that questions related to the accuracy or integrity of any part of the work are appropriately investigated and resolved. This study was conducted in accordance with the Declaration of Helsinki (as revised in 2013). This study was reviewed and approved by the Office of Human Research Ethics Committee at the Faculty of Medicine, Prince of Songkla University, Thailand (REC.60-319-14-3). All participants gave informed consent before participating into this study. The participants’ personal data have been protected and secured.