Surgical resection is a very important therapeutic modality for some lung diseases (1) but is associated with an increased risk of venous thromboembolism (VTE) after surgery (2) and increase complications and cost (3). Several results indicated that thoracic surgery patients are in one of the highest risk groups for VTE (4) and the incidence of VTE after lung resection ranges from 5% to 15.2% (5,6). Our previous study has shown that the incidence of VTE in patients undergoing lung resection without prophylaxis is about 11.5% (7). In addition, postoperative VTE leads to an 8-fold increase in mortality rates after lung cancer resection (8).

Risk factors for VTE include cancer-related factors, treatment-related factors, patient-related factors and biomarkers (9). According previous studies, major risk factors for VTE include cancer type, intravenous tumor invasion, chemotherapy, surgery, intravenous catheterization, advanced age, obesity, long-term bedridden status and trauma (10,11). Previous studies have shown that certain laboratory parameters are associated with an elevated risk of VTE, including white blood cell (WBC) counts (12) and high platelet (PLT)counts (13,14). The coagulation state of patients undergoing lung resection will be changed due to complications, tumors, and surgery (15). And the hypercoagulable state increases after operation, persists for at least 1 month, and returns to the baseline level after 6–12 months (16,17). Coagulation biomarkers can reflect coagulation activation and fibrinolysis, such as high levels of D-dimer are independent predictors of VTE in cancer patients (18). In the Khorana VTE risk score (KRS) model, the risk of developing VTE increased in patients with D-dimer values of ≥1.44 µg/mL (19).

Caprini score is widely used in many surgical specialties to identify high-risk patients with VTE (20). In recent years, the modified Caprini score has been used to assess the risk of VTE after resection of lung cancer (2). The study showed that the higher the score, the higher the incidence of VTE: low risk (score 0–4, 0%), moderate risk (score 5–8, 1.7%) and high risk (score ≥9, 10.3%) (2).

Currently, an experts consensus for the evaluation and prevention of VTE after lung cancer resection has been published (21). However, there are also some limitations need to be considered. Most of the recommendations are based on general surgery and other subprofessional literature, rather than thoracic surgery (22). The purpose of this study was to identify the risk factors of patients after lung surgery and evaluate the modified Caprini score, so as to provide reference for screening high-risk groups of VTE. We present the following article in accordance with the STROBE reporting checklist (available at http://dx.doi.org/10.21037/jtd-20-1279).

In this retrospective study, newly diagnosed lung disease patients hospitalized between July 2016 and December 2017 were selected at the Beijing Chao-Yang Hospital. Malignant tumors and benign diseases were included, among which benign diseases mainly included presumed malignant nodules, pulmonary vesicles, bronchiectasis and so on. Patients will be excluded from the study if they have one of following conditions: current VTE, perioperative prophylactic anticoagulation and insufficient clinical data. The application of perioperative prophylactic anticoagulation was not standard, which make it difficult to accurately evaluate its effect on VTE, so these patients were not included in this study. All patients received physical prophylaxis, including ankle pump exercise, graduated compress stocking (GCS), also went to the ground as early as possible after operation. This study was approved by the Beijing Chao-Yang Hospital Institutional Review Board. All the patients signed the informed consent preoperatively. The study complies with the Helsinki declaration (as revised in 2013). The follow-up period ended when the patient was discharged from the hospital.

In this study, DVT events were confirmed by duplex ultrasonography, and PE events were confirmed by computed tomography pulmonary angiography (CTPA). All patients were screened for DVT by duplex ultrasonography of both lower extremities once before and after operation. If the patient has typical PE symptoms (chest pain, haemoptysis, dyspnoea or persistent hypoxaemia), high Caprini score (≥9) or newly diagnosed DVT after operation, CTPA would be performed.

Data are presented as means ± standard deviation (SD) or medians with ranges (minimum value-maximum value) where appropriate. T test, Mann-Whitney U test or Fisher’s exact test were used to analyze the difference between the two groups. Any variable with a P value of 0.2 in the univariate analysis was included in multivariate analysis. Multivariate logistic regression analysis was used to identify the risk factors related to VTE. We used the area under the receiver operating characteristic (ROC) curve to discriminate patients between the patients with VTE and those without VTE. P value <0.05 was considered statistically significant. All analyses were performed using IBM SPSS Statistics version 21.0 (IBM, Armonk, NY, USA). 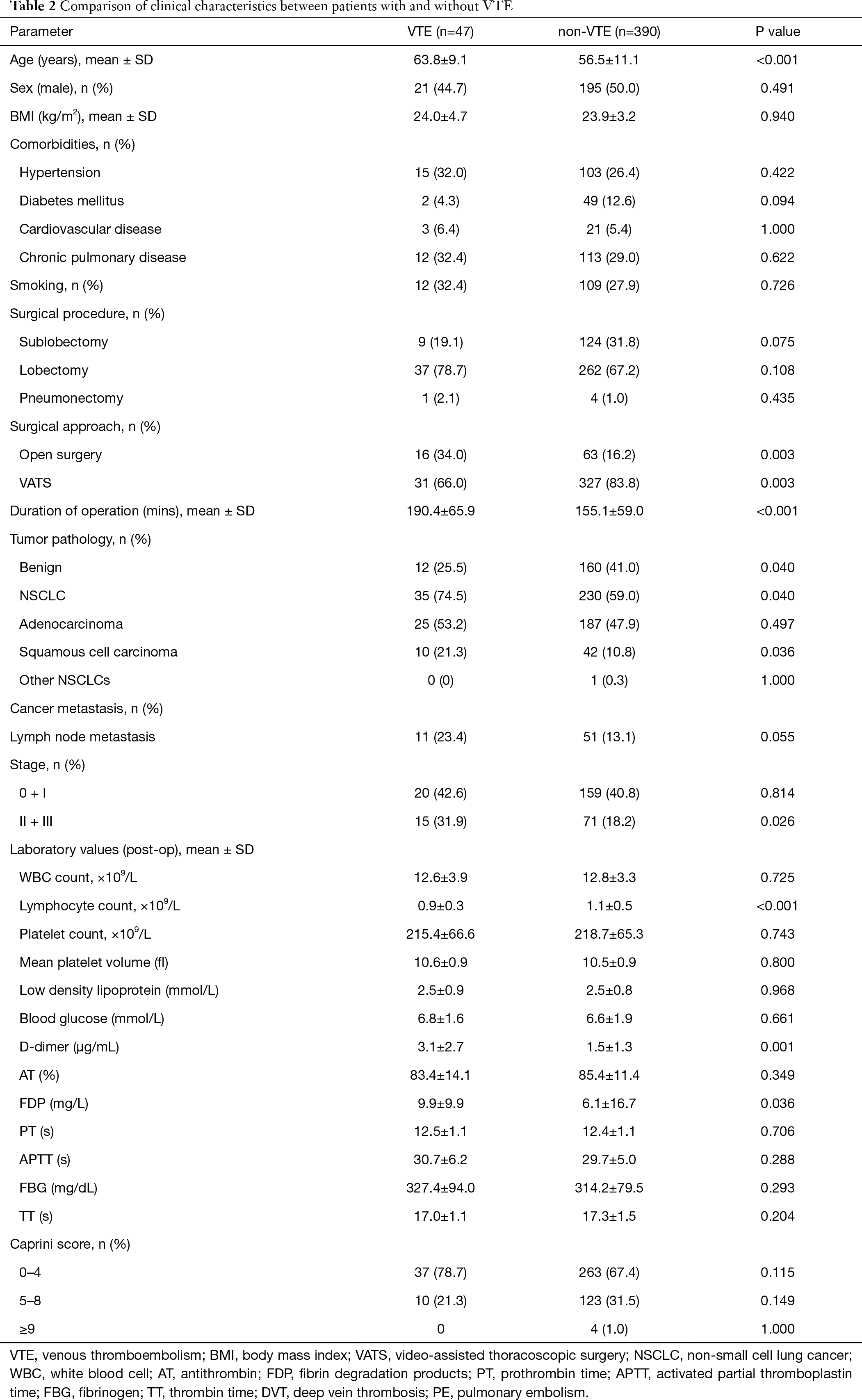 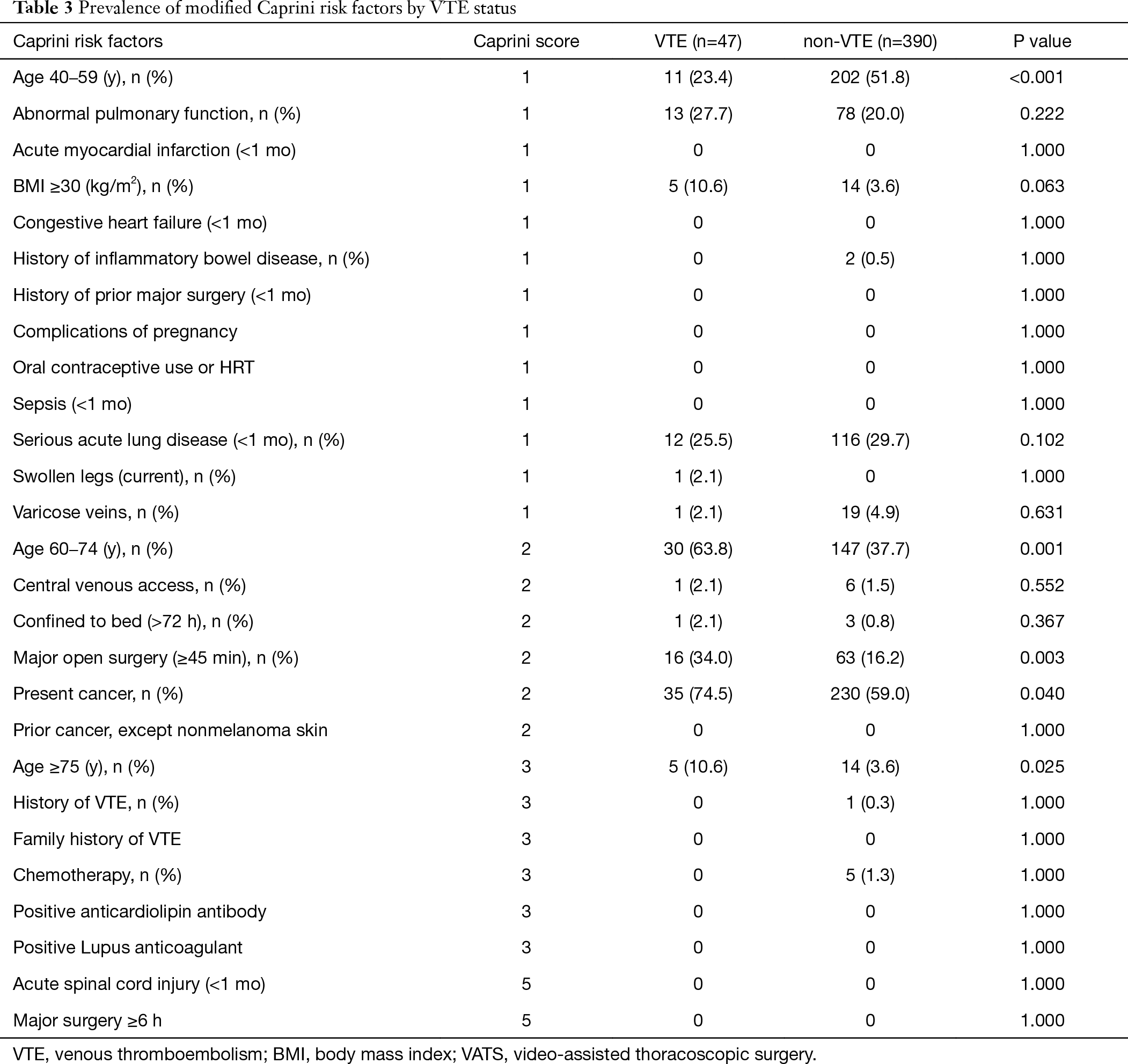 In this study, the total incidence of postoperative VTE was 10.8%, of which DVT, PE and DVT + PE accounted for 85.1%, 0% and 14.9%, respectively. We identified four independent factors associated with VTE: age, duration of operation, lymphocyte count, D-dimer. Among them, lymphocyte count is the protective factor of VTE, and the others are the risk factors. The cut-off values of lymphocyte count and D-dimer employing ROC analysis were 1.15×109/L (AUC, 0.64), 1.37 µg/mL (AUC, 0.73), respectively.

Advanced age is known to be an independent risk factor for VTE (23-25). In this study, we obtained similar results: age (OR, 2.04; 95% CI, 1.40–2.99) was significantly associated with VTE in lung resection patients. Because every 10 years of age is divided into one layer, the result means that for every 10 years of age, the incidence of VTE increases by 1.04 times.

Duration of operation was independently associated with an increased likelihood of VTE development (26-29). The explanation for linking operation time to VTE is multifactorial. Immobility during long surgical procedures can result in the simultaneous presence of blood stasis, increased coagulation, and endothelial damage (30). In addition, prolonged surgery leads to inflammation and oxidative stress, which independently contributing to thrombosis formation (31). In this study, duration of operation was associated with VTE with an OR of 1.51/hour. In craniotomies patients, surgical duration longer than 4 h has been identified as a risk factor of VTE (27). Tran et al. reported an OR of 4.36 for operation time >3 h in patients undergoing mastectomy without reconstruction (32).

Lymphocyte count (OR, 0.28; 95% CI, 0.11–0.69, P=0.006) was a protective factor for VTE in lung resection patients in this study. The cut-off values for lymphocyte count was 1.15×109 (/L). In recent years, more and more attention is has been paid to the role of inflammatory markers in VTE (33,34). Inflammation may interfere with several stages of hemostasis by activating coagulation or by inhibiting fibrinolysis and anticoagulation pathways (35). Lymphopenia is the result of margination and redistribution of lymphocytes in the lymphatic system, accompanied by accelerated apoptosis (36). In this study, we also analyzed WBC count, Hb, PLT count, MPV and other biomarkers, but there was no statistical difference. These biomarkers can not only explain the pathogenesis of thrombosis, but also serve as useful diagnostic markers.

High D-dimer levels are recognized as biomarker associated with the risk of developing VTE (37-39). D-dimer is the degradation product of cross-linked fibrin, indicating the global coagulation activation and fibrinolysis. Elevated levels of D-dimer most probably reflect the hypercoagulable state, which could be affected by anticoagulation (40). In this study, we tried to evaluate the risk of postoperative VTE, and the change of D-dimer was clearly correlated with surgery. So we analyzed the level of D-dimer on the first day after operation, and the results showed that it was an independent risk factor for postoperative VTE. When D-dimer concentration increased by 1.44 µg/mL, the risk of VTE increased by 0.55 times. The cut-off values for D-dimer concentration was 1.37 µg/mL (AUC =0.732, P<0.001), and its sensitivity and specificity are 0.780 and 0.591 respectively. The result is similar to that in the KRS (19).

In this retrospective study, the follow-up period ended when the patients were discharged from the hospital. The median time from ultrasound to operation is 3 days, and the median days of receiving ultrasound, CTPA and hospitalization after operation were 5, 7 and 7 days, respectively. The length of follow-up is closely related to the diagnosis of VTE. On the one hand, Moghadamyeghaneh et al. reported that the first week after operation was the most common time for postoperative VTE (42). On the other hand, Thomas et al. reported that about 40% of VTE occurred after discharge (43). Besides, the missed diagnosis of ultrasound examinations may also underestimate the incidence of VTE. Overall, the incidence of postoperative VTE in our study may be underestimated, which may also lead to deviations in the results of the analysis. Therefore, this is only the result of our single-center study, and the results still need to be verified by a large sample of multicenter studies.

This study has several limitations. First, this study is a single-center, retrospective study, which may cause bias. Second, we did not perform CTPA in all patients to avoid side effects and reduce costs, which might cause small PEs not to be identified. Finally, we did not include patients who received prophylactic anticoagulation in this study, which may also cause some bias.

In conclusion, our study identified four significant factors for VTE in patients undergoing lung resection. The results suggested that the modified Caprini score may not accurately assess the risk of VTE after pulmonary surgery. Risk assessment models based on clinical characteristics and biomarkers will better identify the high-risk groups of VTE who can really benefit from prophylactic anticoagulation.

Reporting Checklist: The authors have completed the STROBE reporting checklist. Available at http://dx.doi.org/10.21037/jtd-20-1279

Conflicts of Interest: All authors have completed the ICMJE uniform disclosure form (available at http://dx.doi.org/10.21037/jtd-20-1279). The authors have no conflicts of interest to declare.

Ethical Statement: The authors are accountable for all aspects of the work in ensuring that questions related to the accuracy or integrity of any part of the work are appropriately investigated and resolved. This study was approved by the Institutional Research Ethics Committee of Beijing Chao-Yang Hospital, Capital Medical University (ID: 2017-Ke-1). All the patients signed the informed consent preoperatively. The study complies with the Helsinki declaration (as revised in 2013). The study outcomes will not affect the future management of the patients.