The central dogma of protective immunity to Mycobacterium tuberculosis (MTB) is the interplay between MTB-infected macrophages and T cells, which is mediated by numerous cytokines produced by both cell types (1). In particular, CD4+ T cells play a major role by producing interferon-gamma (IFN-γ), which synergizes with tumor necrosis factor-alpha (TNF-α) and potentiates macrophages that are capable of restricting the growth of MTB (1,2). Thus, the evaluation of cytokine expression elicited by the cellular responses to MTB-specific antigen (Ag) has been exploited as one way to detect TB infection. As such, the interferon-gamma release assay (IGRA) has led to further advances in the diagnosis of TB infection.

Subsequent intracellular cytokine flow cytometry (ICCFC) studies have enabled further exploration of new candidate biomarkers to detect TB infection as well as differentiate active TB and latent TB infection (LTBI) (3-7). Thus, MTB Ag-specific TNF-α, either alone or with other cytokines, has been introduced as a potential marker for discriminating between active TB and LTBI. This finding has led to a few recent studies to measure MTB Ag-specific TNF-α levels by enzyme-linked immunosorbent assay (ELISA), a simpler method than ICCFC (8,9).

Monitoring TB treatment response remains challenging due to lack of reliable laboratory markers (10). Cytokine based assay has been recently expected to have important implication for management of this limitation based on a supposed link between immune response and decreased MTB Ag load during treatment (11,12). However, IGRA did not offer much value as a treatment monitoring marker (13,14). Instead, IP-10 has shown a positive result in one recent study (15). However, there have been no studies thus far that longitudinally assessed post-treatment changes in MTB Ag-stimulated TNF-α levels in active TB patients although TNF-α plays a crucial role in the development of TB. Therefore, we explored whether the measurement of MTB Ag-stimulated TNF-α release would be useful for monitoring responses to anti-TB treatment in patients with active TB.

Adult patients ≥20 years of age and suspected of having active pulmonary TB based on radiologic findings and/or clinical manifestations were consecutively recruited between May and August 2013 at the Kyungpook National University Hospital. Active pulmonary TB was diagnosed by a positive culture result for MTB from respiratory samples. Patients with human immunodeficiency virus infection or other immunosuppressive disease, or that were receiving immunosuppressive drugs, were excluded. The anti-TB treatment regimen consisted of isoniazid, rifampicin, ethambutol, and pyrazinamide for the first 2 months and was modified during the continuation phase according to the results of drug-susceptibility tests. Patients who received additional management including drug modification due to multidrug resistance, drug side effects, or the development of new acute disease or exacerbation of underlying co-morbidity during the study were excluded. LTBI was defined as testing positive by the QuantiFERON-TB Gold In-Tube (QFT-IT, Cellestis; Carnegie, Australia) test but without clinical symptoms and radiologic signs for active TB among subjects who had recent household contact with active pulmonary TB patients. Subjects that did not have any symptoms and signs as well as a previous TB treatment history and tested negative by the QFT-IT test were included as healthy controls (HC).

The first heparinized blood samples were drawn before the start of anti-TB treatment. The QFT-IT test was performed according to the manufacturer’s instructions. Simultaneously, the leftover supernatant from each tube (nil, TB antigen, and mitogen) of QFT-IT test was transferred to another tube and stored at −80 °C until TNF-α measurement. The second blood samples were taken within 2 weeks after the full course of anti-TB treatment was completed. Collection of supernatant for LTBI subjects and HC was performed in the same way. The level of TNF-α was measured by a standard sandwich cytokine ELISA using a Human TNF-α ELISA Kit (Koma Biotech; Seoul, Korea) according to the manufacturer’s instructions. All samples were evaluated in duplicate by a single technician who was blinded to the identity of the study participants. Unstimulated (TNF-αNil), MTB Ag-stimulated (TNF-αAg), and mitogen-stimulated TNF-α levels were measured in each patient. TNF-αAg-Nil was defined by subtracting the level of TNF-αNil from that of TNF-αAg.

The paired Wilcoxon signed-rank test and Mann-Whitney U test were used to compare each TNF-α concentration between active TB patients before and after treatment and among different groups, respectively. All statistical analyses were performed using PASW 18.0 software (SPSS Inc.; Chicago, IL, USA). Two-sided P values <0.05 were considered significant.

Twenty-three pulmonary TB suspects were consecutively recruited during the study period. Among them, 20 patients had a positive MTB culture from a respiratory specimen. However, four of them were excluded for the following reasons: one with multidrug-resistant TB, one with drug-induced hepatitis, one with acute decompensated congestive heart failure at the end of anti-TB treatment, and one that transferred to another hospital. Thus, 16 active TB patients completed the study. In addition, 25 LTBI subjects and 10 HC were included. Median age and sex distribution were comparable between active TB and LTBI groups.

Comparison of TNF-α response to MTB-specific Ag stimulation between active TB patients before and after anti-TB treatment, subjects with LTBI, and HC 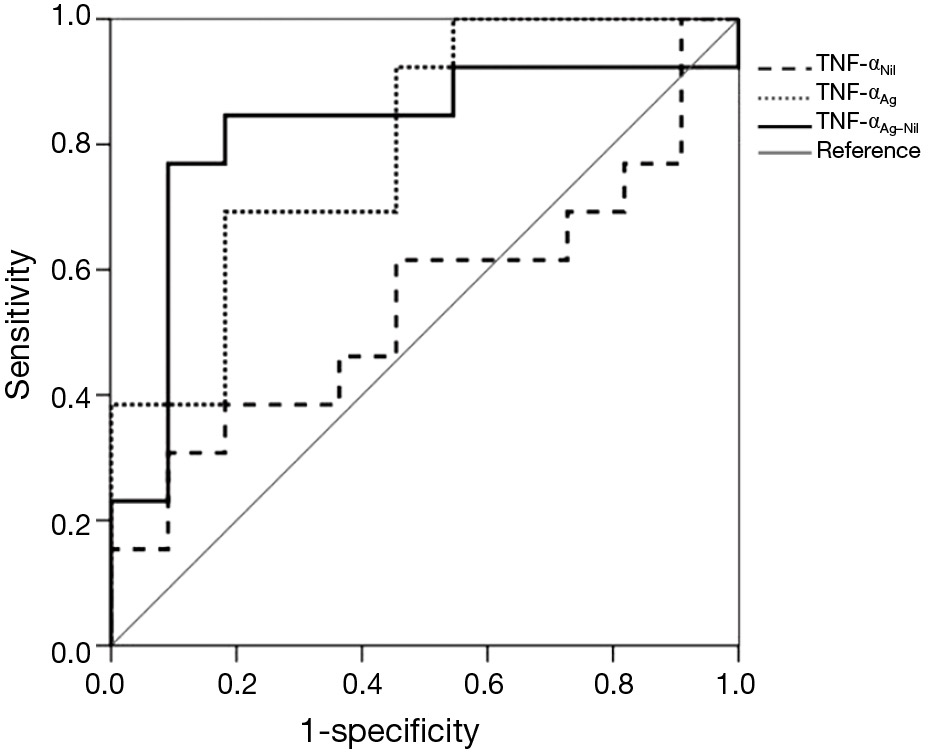 TNF-α is primarily produced by macrophages activated by IFN-γ but also by activated T-cells (16). Unlike TNF-αNil levels, TNF-αAg and TNF-αAg-Nil levels mainly reflect T-cell responses to MTB Ag stimulation. Our finding that TNF-αAg and TNF-αAg-Nil significantly decreased after successful treatment in patients with active TB may be related to a decreased MTB Ag load at the time of treatment completion. These results are comparable to previous flow cytometric studies, which have shown that the number of MTB Ag-stimulated IFN-γ+TNF-α+IL-2+CD4+ T cells (3), IFN-γ+TNF-α+CD4+ T cells (5-7), or single TNF-α+CD4+ T cells (4) was significantly decreased after treatment. Contrary to IFN-γ showing persistently elevated responses to MTB Ag stimulation even after successful treatment (7,14,17), our study showed that TNF-α release in response to MTB Ag stimulation diminished with a decrease in bacterial load. These different responses to MTB Ag between the two cytokines suggest the possibility that IFN-γ and TNF-α may have different roles at different stages of TB infection/disease. In addition to monitoring treatment response, these findings may be useful in distinguishing between recurrent TB and non-TB disease in patients with a history of previously treated TB. On the other hand, ELISA, which is a less complicated method that provides results comparable to those of ICCFC, may be the preferred method for monitoring treatment responses in clinical settings.

Baseline TNF-α was significantly higher in active TB than in LTBI. Given its main role as a pro-inflammatory cytokine (1,2), it is likely that TNF-αNil was more elevated in active TB according to disease progression, unlike LTBI. In addition, the significant differences in TNF-αAg and TNF-αAg–Nil responses between active TB and LTBI may reflect bacterial load similarly to the difference in those responses between untreated and treated active TB. Thus, these differences in TNF-αNil, TNF-αAg, and TNF-αAg-Nil between active TB and LTBI may be helpful in differential diagnosis of subjects with positive IGRA results, which alone cannot discriminate between the two conditions. Baseline TNF-α is not specific for TB; therefore, it is also expected to be elevated in non-TB diseases such as other infectious or inflammatory diseases (18,19). However, different T-cell responses to MTB Ag between active TB and non-TB disease are likely to be manifested, as shown in another study (8). These different responses can provide further information for differentiation between active TB and non-TB disease with concurrent LTBI, although this aspect needs to be confirmed in future studies.

There are some discrepancies between our results and a recent study by Wang et al. (8), in which they similarly showed that TNF-αAg–Nil levels were significantly higher in active TB than in LTBI. However, it is difficult to explain why in their study the baseline TNF-α level in LTBI subjects were similar to or more elevated than those in active TB patients, which is contradictory to the results of our and other previous studies (20). A variable spectrum of latent infection may exist within the same LTBI individual (21), as active TB has varying degrees of severity. Thus, different cohorts of LTBI subjects as well as patients with active TB may have led to these discrepancies.

The present study showed that TNF-αNil was persistently elevated after anti-TB treatment in active TB patients, resulting in significant differences between treated TB and LTBI patients. However, T-cell responses to MTB Ag were diminished to levels equivalent to those of LTBI as bacterial load decreased after anti-TB treatment. The persistent elevation of TNF-αNil levels in treated TB patients needs further investigation. A slow decline of initially elevated TNF-αNil levels or the presence/development of hidden co-infectious or -inflammatory disease at the time of follow-up tests may be possible explanations for this persistent elevation.

Our study has some potential limitations. First, there were overlapping regions between the data ranges of each group, although overall significant differences between the groups were detected. We did not examine other potential biomarkers because our interest was focused on changes in TNF-α level. Thus, simultaneous measurement of multiple cytokines along with TNF-α needs to be required to be more useful in a clinical setting. Second, our supernatant analysis method does not provide information about the cellular sources of TNF-α. However, this method is highly feasible in clinical settings where QFT-IT test is already available. Lastly, the sample size of cases with active TB was relatively small; thus, a proper comparison of TNF-αNil levels between untreated and treated active TB patients might benefit from a larger sample size.