Surgical resection is generally accepted as the optimal treatment for treating early-stage non-small cell lung cancer (NSCLC) (1,2) with 5-year survival rates of up to 73% and 50% for stage I and II NSCLC, respectively (3). However, not all patients with early-stage NSCLC are surgical candidates due to old age, poor pulmonary function, poor physical function, or comorbidities (4) and when untreated, the outcome of patients with routinely detected early stage NSCLC is a distinctly poor with median survival of 10 months (5).

Chronic obstructive pulmonary disease (COPD) is an established risk factor for the development of lung cancer (6-9). COPD is also the most frequent concomitant (15.3%) disease in early-stage NSCLC patients (10) and the prevalence of COPD in newly diagnosed lung cancer cases was six-fold greater than in people without lung cancer regardless of smoking exposure in ever-smokers (11). Moreover, patients with COPD have higher risk of pulmonary complications (PPCs) and poorer survival outcomes after surgical resection than those without COPD (12-15). Thus, pulmonary functions are evaluated to assess the feasibility for lung resection, and radiation therapy including stereotactic body radiotherapy (SBRT) is alternatively suggested for the treatment of the early-stage NSCLC, when patients are medically inoperable (16,17). Indeed, radiotherapy (RT) had shown better survival compared to those with supportive care alone (18,19). However, some COPD patients are reluctant to receive either surgery or RT due to cancer stigma, despite being diagnosed with early-stage, treatable lung cancer (20,21).

This is a retrospective cohort study conducted with stage I and II NSCLC patients who were 40 years or older and who had spirometry tests at the time of cancer diagnosis in Samsung Medical Center, Seoul, Korea from January 2012 to June 2014. As our study objective was to evaluate treatment modalities among early stage NSCLC patients with COPD, we selected 703 subjects who had COPD [defined as pre-bronchodilator forced espiratory volue in 1 second (FEV1)/forced vital capacity (FVC) <0.70] at the time of cancer diagnosis. Patients who were diagnosed with interstitial lung disease (n=9), had history of lung cancer (n=1), and were transferred to other hospitals for further treatment (n=1) were excluded. The final study sample included 692 subjects. This study was conducted in accordance with the Declaration of Helsinki (as revised in 2013). The Institutional Review Board of Samsung Medical center approved this study (No. 2018-07-057) and waived the informed consent as we only used de-identified data retrieved from electronic medical records (EMR).

Stage of NSCLC was determined according to the seventh edition of TNM classification (29). NSCLC included adenocarcinoma, squamous cell carcinoma, and other types such as large cell carcinoma, neuroendocrine carcinoma, poorly- or undifferentiated carcinoma, and pleomorphic sarcomatoid carcinoma. Some patients who could not undergo histologic confirmation were included, when the diagnosis of lung cancer was unequivocal based on clinical and image findings.

Patients were primarily grouped into ‘surgery group’ or ‘no surgery (NS) group’ according to whether patients received curative surgery or not. The surgery group was further categorized as ‘surgery only group’ for patients who received surgery only and ‘surgery with adjuvant treatment group’ for patients who received adjuvant chemotherapy and/or RT after surgical resection. The NS group included patients who received definitive RT (RT group) and patients who did not receive any definitive treatment for lung cancer including surgery or definitive RT (supportive care only group, SC-only group). Two investigators (NK and SS) reviewed patient medical records to determine the decision-making process behind treatment decisions for the NS group. When there was any discordance between the reviewers, the study team reviewed those cases and made the final decision. The primary outcome was all-cause mortality, calculated by total number of deaths divided by the person-year (summation of follow-up periods of each person). Person-time was calculated from the first date of treatment (surgery group and RT group) or the date of diagnosis (SC-only group) to the date of death, last date known to be alive, or the end of the study period (April 23, 2018), whichever comes first. All dates of patient deaths were ascertained from the medical records or the death records from Statistics Korea. In addition, we obtained the following data from the EMR: demographic, behavioral, and other clinical information including age at diagnosis, sex, smoking status, body mass index (BMI), Eastern Cooperative Oncology Group (ECOG) performance status at diagnosis, comorbid conditions, tumor histology, and hemoglobin level that would be associated with either exposure or outcome.

Survival curves were generated by the Kaplan-Meier product-limit method and compared by log-rank tests. We calculated hazard ratios (HR) with 95% confidence intervals (CI) for all-cause mortality using the Cox proportional hazards regression models. We adjusted for age (continuous), sex (male or female), smoking status (never, or ever), BMI (continuous), performance status (ECOG ≤1, or ≥2), comorbidity (none, or any), tumor stage (clinical stage I or II), hemoglobin level (continuous), FEV1% predicted and DLco % pred (continuous) to account for potential confounding factors at the time of NSCLC diagnosis. To improve comparability of the patients in different treatment modality, additional analyses were performed limiting to patients with age <70 or ≥70 and patients with clinical stage I. We examined the proportional hazards assumption using plots of the log (-log) survival function and Schoenfeld residuals. All tests were two-sided, and P values <0.05 were considered significant. All analyses were performed using Stata software (ver. 14.0; Stata Corporation, College Station, TX, USA). 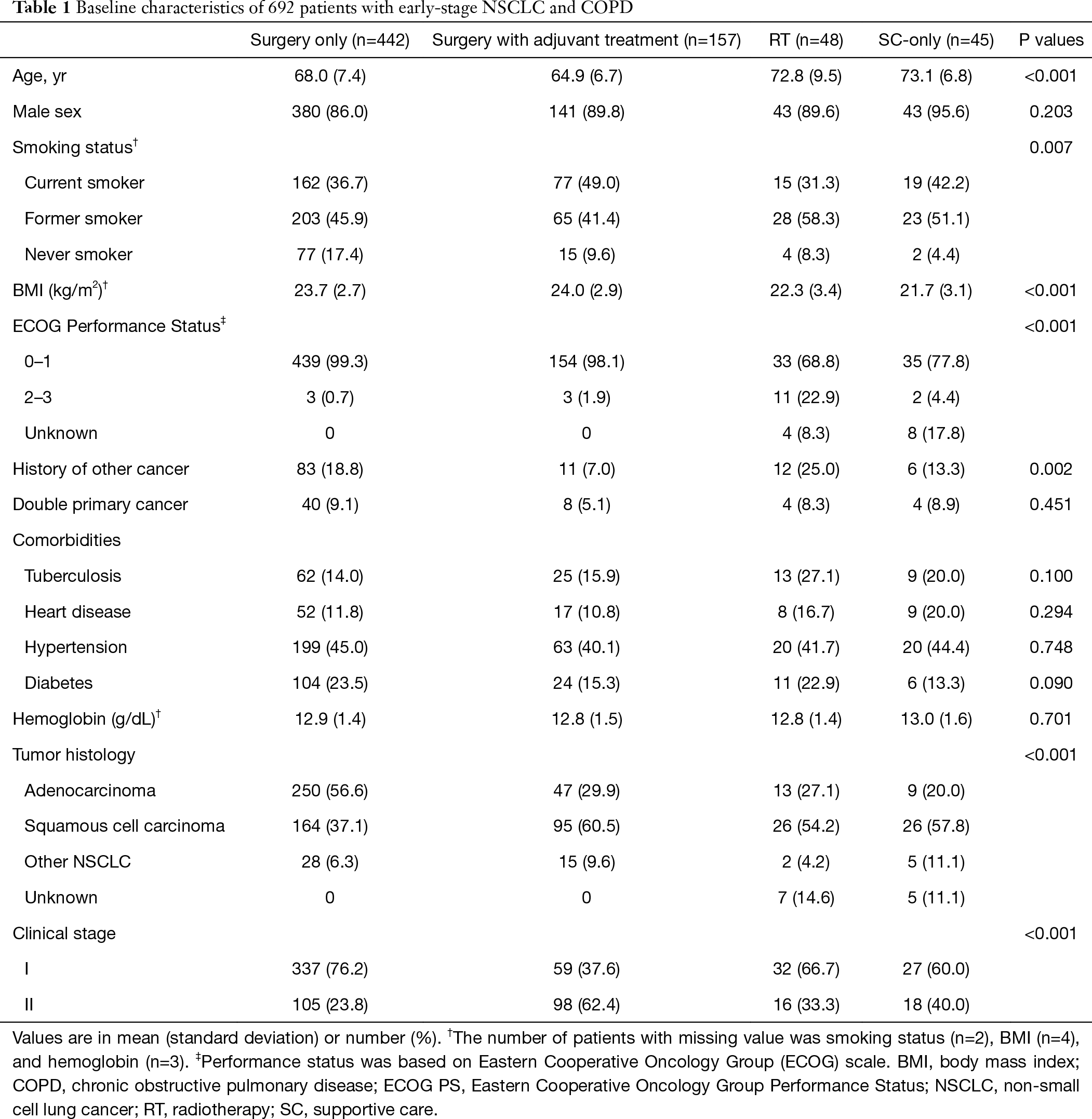 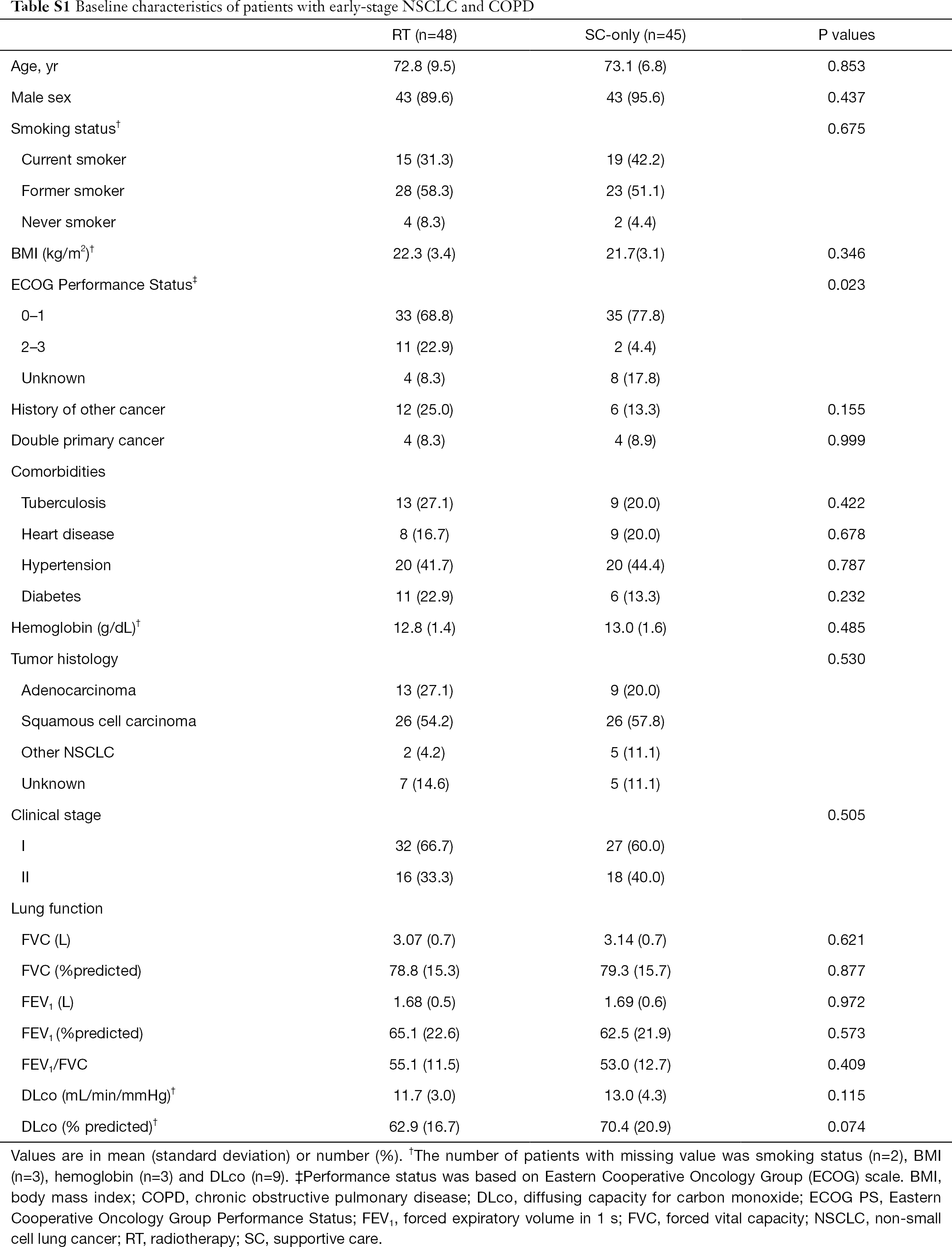 Figure 1 The distribution of COPD severity between (A) surgery vs. no surgery groups and (B) by treatment modalities. COPD, chronic obstructive pulmonary disease. 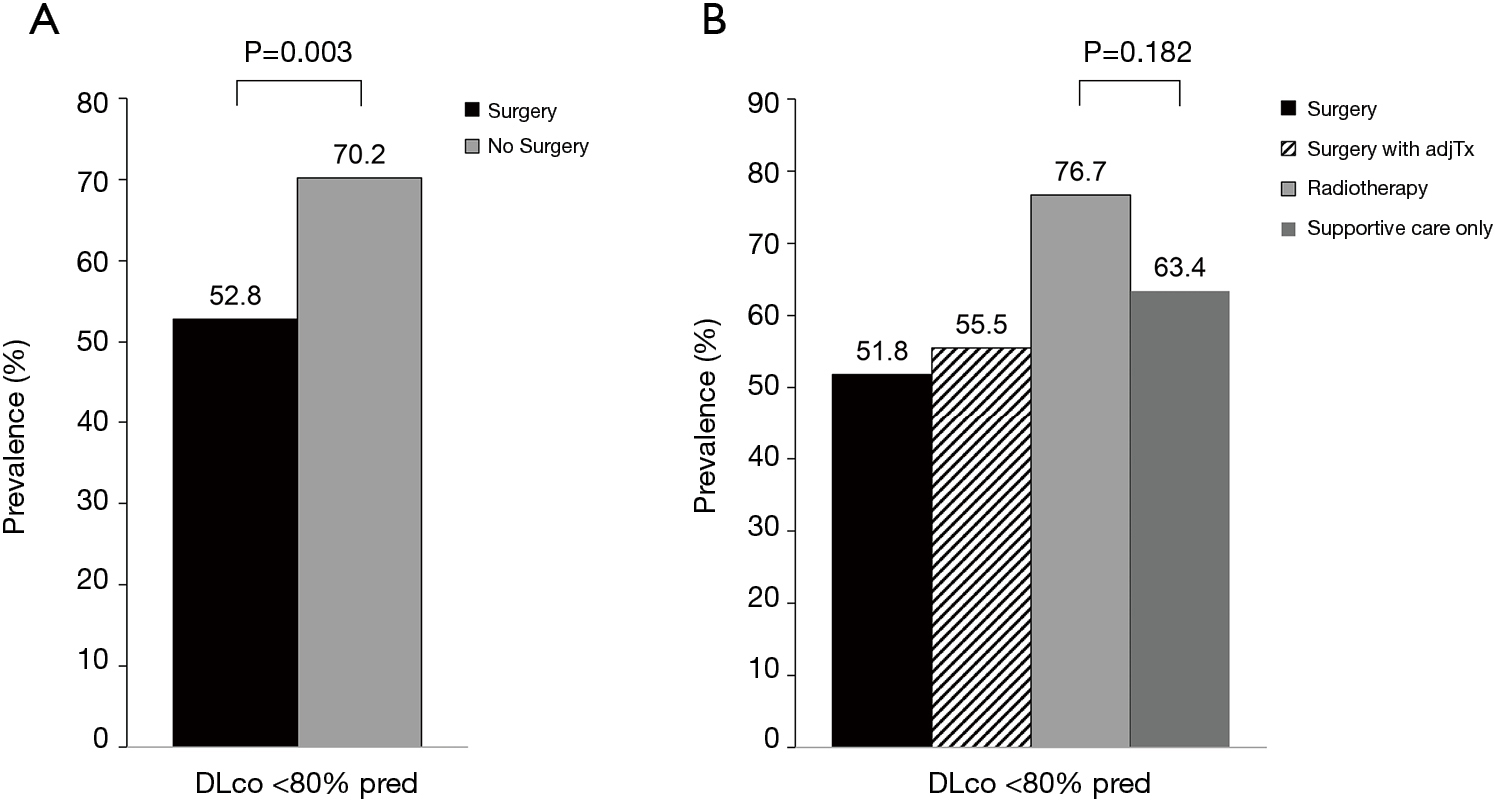 Figure 2 Prevalence of reduced DLco (<80% predicted) between (A) surgery vs. no surgery groups and (B) by treatment modalities. DLco, diffusing capacity for carbon monoxide.

All-cause mortality according to the treatment modality 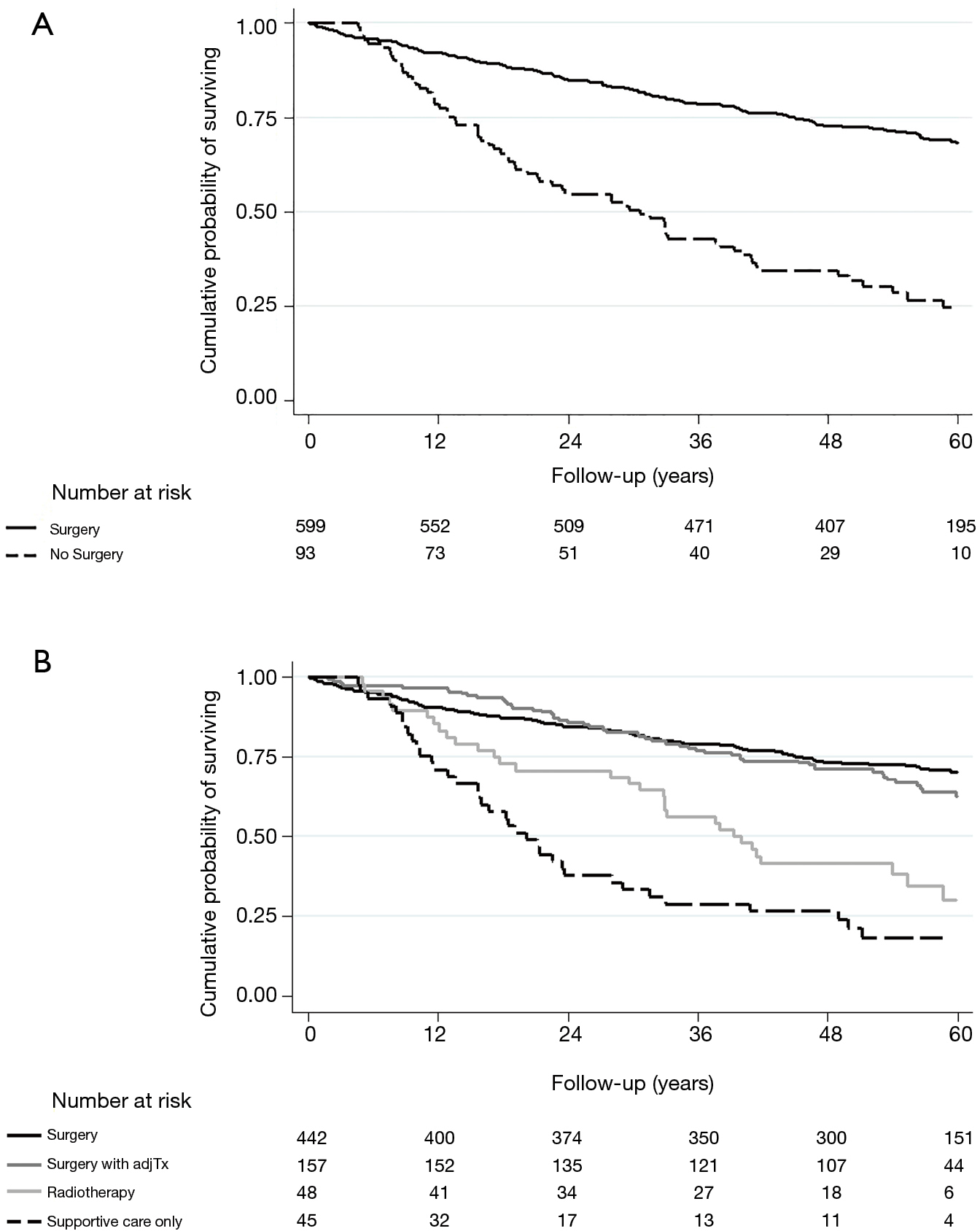 Figure 3 Cumulative probability of surviving between (A) surgery vs. no surgery groups and (B) by treatment modalities.

Considering that there is significant difference of age among patients with different treatment modalities, we performed a subgroup analysis with age <70 and ≥70 years (Table S2). However, there was no interaction with age and the results remained as same. When we restricted the analysis with clinical stage I patients, RT group had worse survival compared to the surgery only group (HR, 2.40; 95% CI, 1.31–4.42), but had better survival than SC-only group (HR in SC-only group compared to RT group, 3.15; 95% CI, 1.13–8.80) (Table S3). 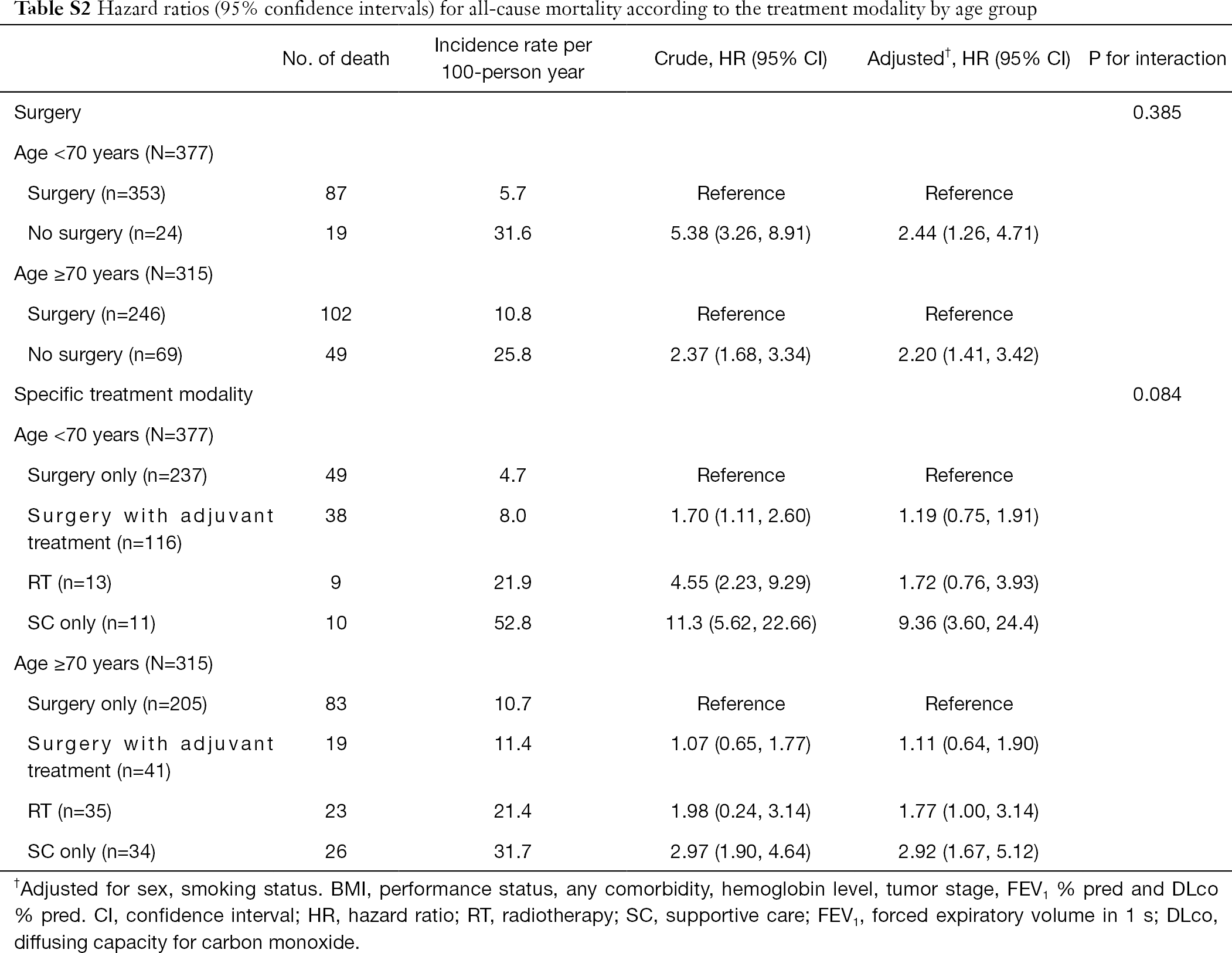 In our observational study, however, patients who received surgery and those who did not are a different population with a distinct entity. This is the reflection of the real-world practice of early-staged NSCLC patients with COPD. The surgery group had relatively mild COPD and better general condition, leading to a favorable outcome, compared with NS group. Whereas, the NS group were older, and had more advanced COPD with poor performance status, indicating that those were deemed medically inoperable. Among the patients who did not undergo surgery, only half of them received RT as an alternative option and the other half of them did not receive curative treatment. The RT group showed significantly better survival than the SC group despite similar age, smoking status, BMI, comorbidities, and lung function between the RT group and SC group. Indeed, previous study demonstrated that definitive radiotherapy was well tolerated in early-stage NSCLC patients with COPD (30). Thus, RT should be taken into account than supportive care only for better survival outcomes in COPD patients who are not feasible to undergo surgical resection.

Our study confirmed that surgical resection is the primary and preferred treatment option for early-stage NSCLC patients with COPD when the COPD patients are feasible to undergo surgical resection, which was consistent with the general guidelines for treating early-stage NSCLC (1). In our study, however, the surgery group had higher postoperative mortality than the NS group during the first 90 days (Figure 3A), which is in accordance with existing literature documenting the risks of surgery (31,32). Thus, clinicians should be aware of postoperative mortality risk and evaluate patient lung function and overall profiles carefully when considering lung resection surgery for early-stage NSCLC patients with COPD.

In terms of treatment decision, RT was mostly decided by physicians (concerned primarily with poor lung function) whereas SC-only was mostly decided by patients and family in accordance with their preference not to have active treatment (Table S4). We reviewed medical records to identify key factors used to support the decision to pursue surgical or non-surgical interventions. Some factors that lead to non-surgical intervention were old age, poor lung function, comorbid disease, performance status, and patient will. These factors are in line with the findings from the prospective cohort study of early-stage NSCLC patients (33). In our study, the decision to rely exclusively on SC was typically made by the patient or family with the main reason for not receiving any other definitive treatment including RT being ‘patient and family will.’ One reason patients and families might decide against treatment is the stigma associated with cancer (20). Despite increasing survival rates, many still consider cancer to be a death sentence and are unwilling to consider any treatment options (34). Furthermore, patients might not have enough information about alternative treatment options such as RT or they might worry too much about treatment complications. Considering that patients in the SC-only group had similar lung function and performance status, more tailored education would be necessary for early-stage NSCLC patients with advanced COPD at diagnosis. In addition, clinicians need to encourage shared decision-making by providing accurate therapeutic information.

There are several limitations of this study. First, since COPD was based on a pre-bronchodilator spirometry (35), the diagnosis of COPD might be overestimated. Second, this study was conducted with patients at a tertiary hospital and the results of the study might not be generalizable to patients at different settings. Thirdly, because this is a retrospective cohort study, we were not able to include all influencing factors which affect the outcomes. Further studies are necessary to confirm our finding. In addition, there might be some information we missed regarding treatment decisions because we only included information available on the EMR and there might be other reasons physicians or patients decide on specific treatments.

While there are many epidemiologic studies showing the high prevalence of COPD in patients with NSCLC patients, there is limited evidence in terms of treatment modalities and its associated clinical outcomes for lung cancer patients with COPD. The results of our study suggest that surgical resection should be considered as the first choice for early-stage NSCLC with COPD. RT can be an alternative option if surgery is not feasible due to poor lung function or general patient condition. A multi-disciplinary approach for treating early lung cancer patients with COPD is necessary. In addition, more active communication between patients and physicians might be helpful for adequate decision-making regarding treatment for patients with early-stage NSCLC and COPD.

Conflicts of Interest: All authors have completed the ICMJE uniform disclosure form (available at http://dx.doi.org/10.21037/jtd-20-667). The authors have no conflicts of interest to declare.

Ethical Statement: The authors are accountable for all aspects of the work in ensuring that questions related to the accuracy or integrity of any part of the work are appropriately investigated and resolved. This study was conducted in accordance with the Declaration of Helsinki (as revised in 2013). The Institutional Review Board of Samsung Medical center approved this study (No. 2018-07-057) and waived the informed consent as we only used de-identified data retrieved from electronic medical records (EMR).