Esophageal cancer is one of the most common malignancies worldwide, especially in some areas of Asia (1). In 2012, it was reported as the fourth lethal alimentary tract cancer in the United States (2). Currently, operation is the mainstay treatment, especially for resectable tumor patients (3). Presently, the 5-year survival rate has increased from 17.1% to 32% (3-5). However, 5–10% mortality and 50% morbidity after operation make the prognosis even more grim (6). Among various plausible causes, lymphadenectomy-induced complications and lymph node metastasis after operation should not be ignored. Many studies support the hypothesis that lymph node metastasis is responsible for postoperative relapse because the lymphatic route is one of the most important pathways for esophageal cancer metastasis (7). Theoretically, the more suspicious lymph nodes are removed, the more potential benefits such as more accurate staging, lower postoperative relapse, and higher survival rate may be achieved (8). However, postoperative complications and mortality might increase accordingly (9). Specifically, subcarinal lymph nodes are beneath the bronchial bifurcation near the pulmonary plexus of the vagus nerve. Hence, resection of these lymph nodes is associated with potential trauma to the trachea, such as thermal radiation injury possibly caused by electronic devices. In addition, the vagus nerve can be injured, resulting in sputum retention. This is detrimental for postoperative pulmonary function restoration. Additionally, the bronchial artery may be ligated during the lymphadenectomy procedure. Consequently, blood supply to the trachea and bronchus may be reduced partially. Practitioners are concerned about all these potential risks. Thus, there is dispute concerning whether extensive lymphadenectomy should be performed (10). An adequate range of lymph nodes dissection can maintain the balance between operative effects and postoperative complications/mortality. Therefore, exploring a normative lymphadenectomy based on reasonable consideration is much significant.

Few studies have focused on these concerns and no standard dissection guideline is available for practitioners. Therefore, this study assessed the role of subcarinal lymph nodes in lymph node metastasis in thoracic esophageal squamous cell carcinoma (ESCC) and investigated the adequate range of lymph node dissection during esophagectomy. We present this article in accordance with the STROBE reporting checklist (available at http://dx.doi.org/10.21037/jtd-20-1776).

This study retrospectively evaluated patients with esophageal carcinoma who were admitted to our department and underwent esophagectomy. The study was conducted in accordance with the Declaration of Helsinki (as revised in 2013). The study was approved by the human participants committee of West China Hospital of Sichuan University (the ethical number: 2005-126). Preoperatively, permission for the use of patients resected specimens and written informed consents were obtained.

We included patients with histologically confirmed thoracic ESCC who underwent radical esophagectomy as the primary therapy and had complete clinicopathological data.

We excluded patients who had cervical esophageal cancer, had received neoadjuvant chemo/radiotherapy, or had ESCC combined with other malignancies.

A total of 931 patients with ESCC were admitted into our department from July 2008 to December 2010, of which only 782 (men: 656 and women: 126) were eligible for analysis. The median age of the patients was 59 years (range: 33–82 years). The clinicopathological stage of ESCC complied with the seventh edition American Joint Committee on Cancer tumor-node-metastasis staging criteria (2009) (15).

The surgical approach and lymphadenectomy’s selection were depended on patients’ preoperative examinations, at the same time, surgeons evaluated the patients’ general condition and finally supplied for the patients the most appropriate surgical procedures. Generally, the McKeown esophagogastrectomy with three-filed lymph node dissection, the Sweet and Ivor-Lewis esophagogastrectomy with two-filed lymph node dissection may be performed. The lymph node identification and dissection for each patient were strictly followed by American Joint Committee on Cancer tumor-node-metastasis staging criteria (2009). Two experienced pathologists would fix the resected specimens, embedded and stained them with diaminobenzidine chromogen counterstained solution [1:50, EnVision TM Detection Kit, Gene Tech (Shanghai) Company Limited] and hematoxylin (Zhongshan Golden Bridge Biotechnology Co., Ltd, Beijing, China) subsequently. The routine way of assessing each specimen was adopted histologically, and the pathologists documented the extent and location of metastatic lymph nodes by examining the largest cross section of dissected lymph nodes.

Anastomotic leakage was defined as the extravasation of water-soluble contrast medium and/or appearance of orally ingested methylene blue in the thoracic drainage (17).

Chylothorax was deﬁned as a pleural effusion with presence of chylomicrons on lipoprotein electrophoresis or a triglyceride level higher than 110 mg/dL (18).

Recurrent laryngeal nerve paresis or palsy was diagnosed by the presence of hoarseness and aphonia (19).

All patients were followed-up by telephone or interview at 3-month intervals for the first 2 postoperative years, at 6-month intervals for the following 3 years, and thereafter annually. Data regarding tumor status (tumor metastasis and recurrence), patient status (survival and death), and patients lost to follow-up were documented through outpatient follow-up as well as through telephone and letter follow-ups. Survival time was measured from the date of operation to the date of death or last follow-up. The last general follow-up of survivors was conducted in the end of March 2016. The median follow-up time was 30.41 months (range: 1.06–62.86 months).

Patient characteristics and the effect of subcarinal lymph node metastasis 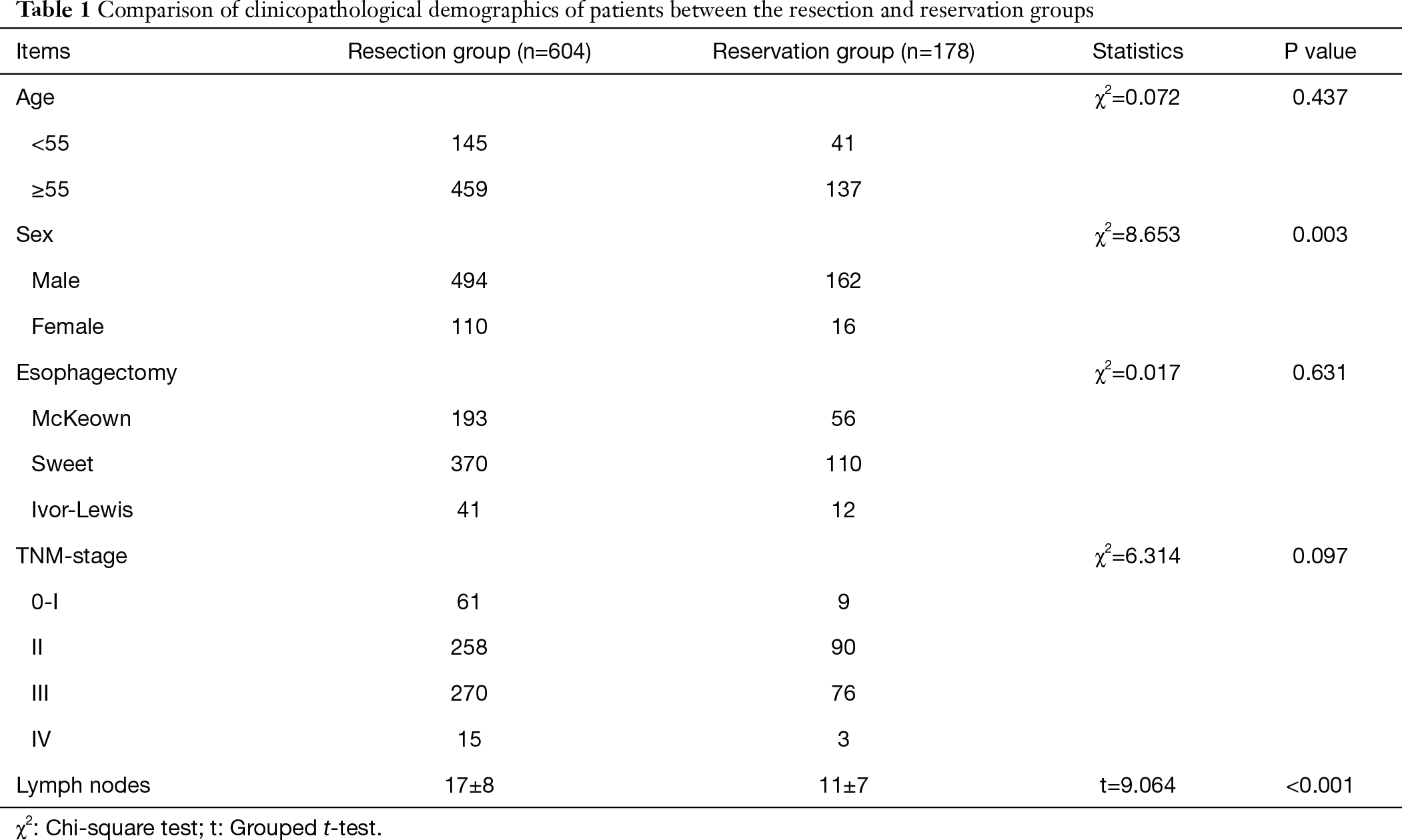 The role of subcarinal lymph nodes in lymph node metastasis 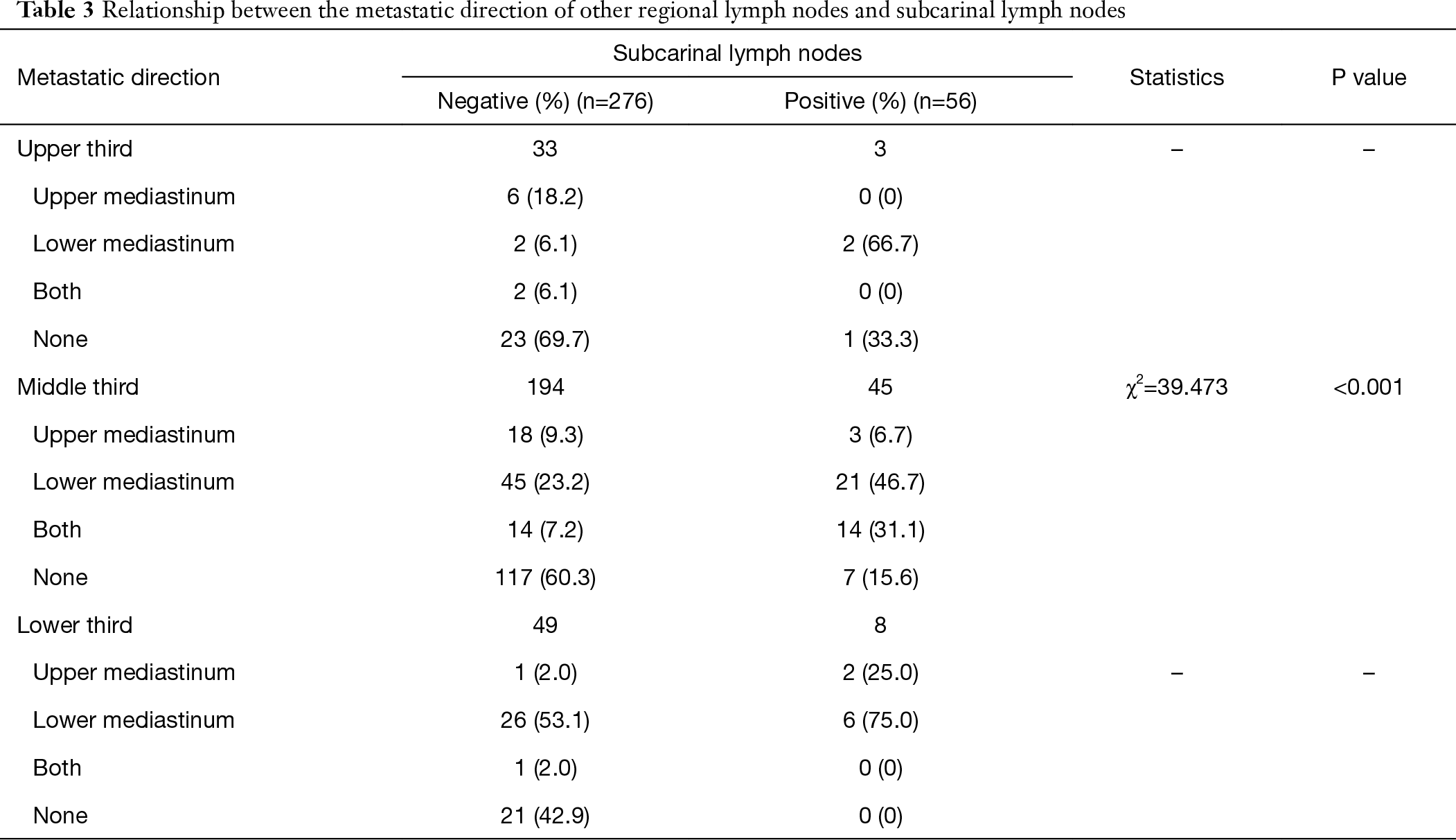 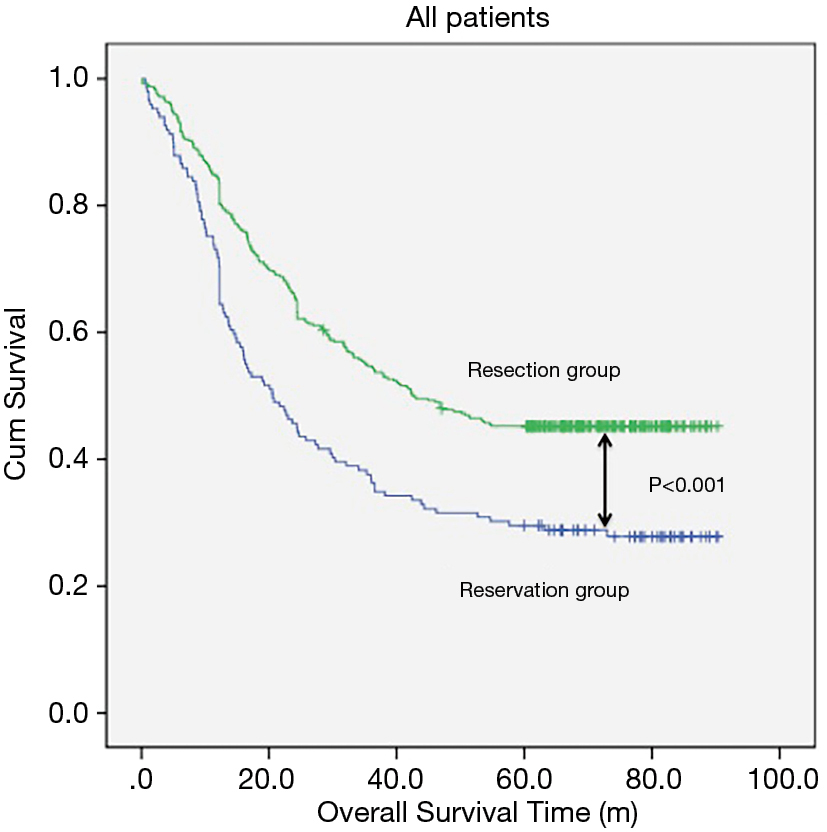 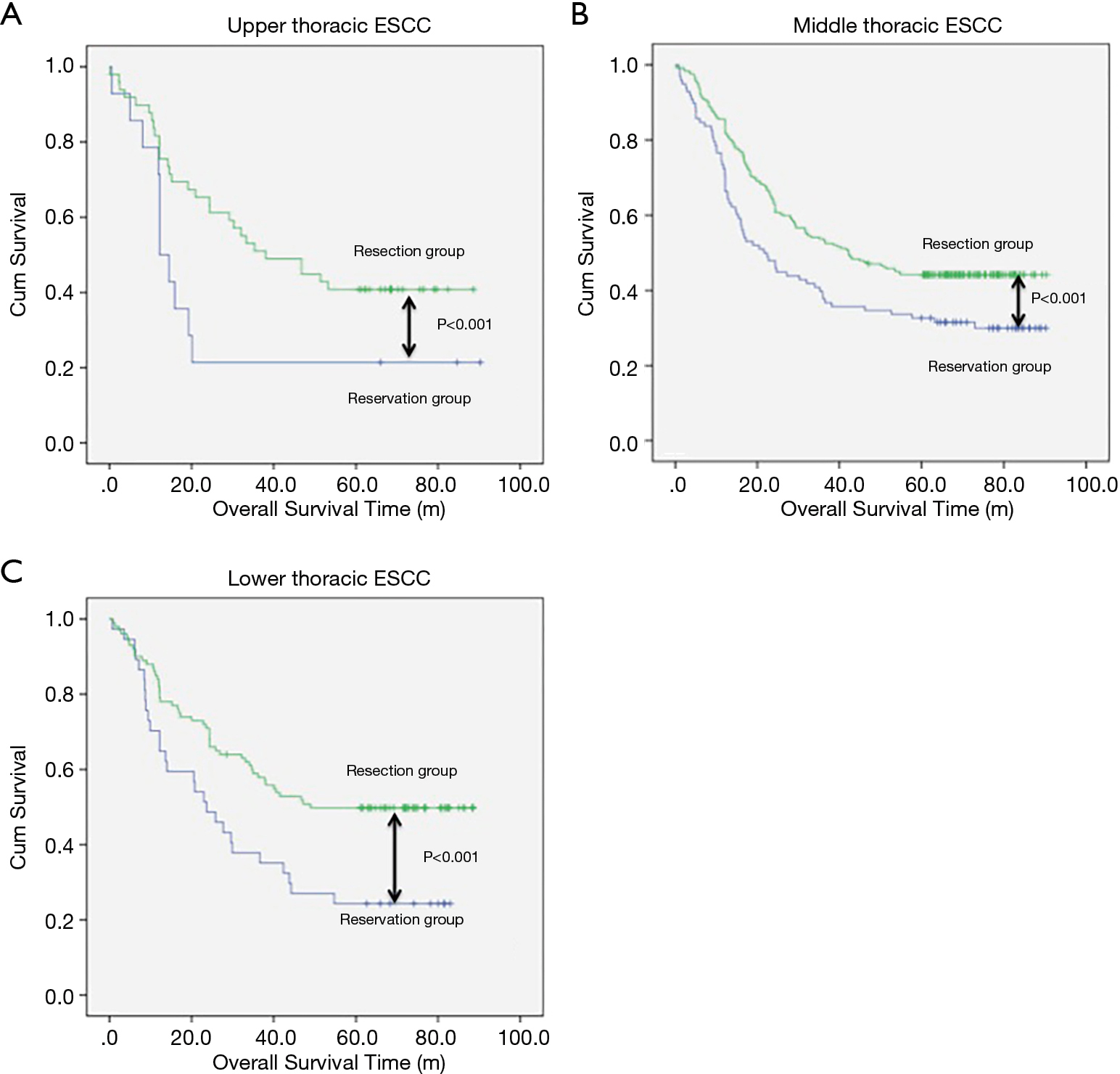 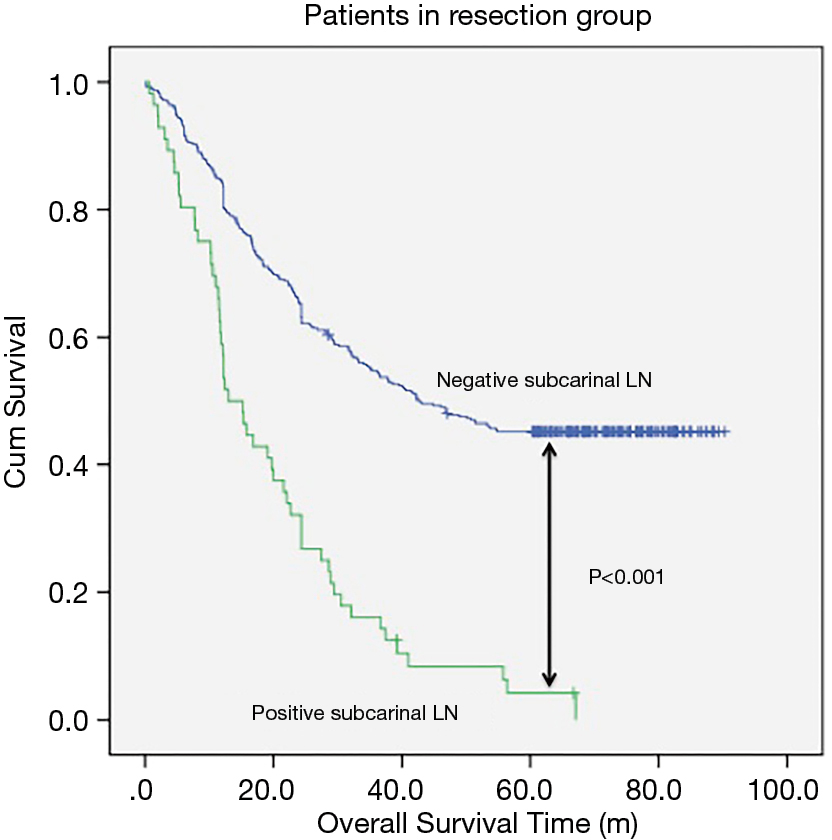 Our study has some limitations. First, our study was a single-center retrospective study; therefore, analytical and selection biases were inevitable, however, in order to eliminate the interobserver variability of lymph nodes identification of our study, firstly, surgeons identified every station of lymph node and dissect them strictly followed by American Joint Committee on Cancer tumor-node-metastasis staging criteria (2009), which guarantee the precise dissection of each station of lymph nodes. Secondly, the two experienced pathologists examined the resected lymph nodes histologically, which make sure the exact definition of subcarinal lymph nodes in our study. Second, the specific role of subcarinal lymph nodes in lymph node metastasis has not been investigated previously. In addition, the numbers of upper and lower ESCC patients were inadequate in this study. Thus, further investigation with a larger study population is warranted. Third, the prognostic significance of subcarinal lymph node metastasis was mainly focused on ESCC patients because esophageal cancer in most of the Chinese patients is squamous cell carcinoma; however, in most of the patients of the Western countries, esophageal cancer is adenocarcinoma. Thus, a large-scale multicenter, prospective study is warranted to verify the findings.

Reporting Checklist: The authors have completed the STROBE reporting checklist. Available at http://dx.doi.org/10.21037/jtd-20-1776

Conflicts of Interest: All authors have completed the ICMJE uniform disclosure form (available at http://dx.doi.org/10.21037/jtd-20-1776). The authors have no conflicts of interest to declare.

Ethical Statement: The authors are accountable for all aspects of the work in ensuring that questions related to the accuracy or integrity of any part of the work are appropriately investigated and resolved. The study was conducted in accordance with the Declaration of Helsinki (as revised in 2013). The study was approved by the human participants committee of West China Hospital of Sichuan University (the ethical number: 2005-126). Preoperatively, permission for the use of patients resected specimens and written informed consents were obtained.