Primary lung cancer is the leading cause of cancer mortality worldwide. Although optimal treatment of surgical resection for early-stage, non-small cell lung cancer (NSCLC), 5-year survival rates for surgically resectable NSCLC are still unsatisfactory and range from 19% for stage IIIA to 63% for stage IA (1). Therefore, the identification of predictive and/or prognostic markers is important to stratify patients with resected NSCLC and select high-risk patients who should receive aggressive adjuvant chemotherapy.

The proprotein convertases (PCs) are a family of Ca2+-dependent serine proteases involved in processing and activation of several types of substrates (2). It comprises nine members: PC1/3, PC2, furin, PC4, PC5/6, PACE4, PC7, SKI-1/S1P, and PCSK9 (3,4). There is growing evidence for the involvement of PCs in various cancer types, including roles in each of the biologic capabilities acquired during the multistep development of human tumors (5). These biologic capabilities include proliferative signaling, evading growth suppressors, enabling replicative immortality, inducing angiogenesis, and activating invasion and metastasis (6-10). Overexpression of PCs has been documented in a variety of neoplasms, including those from skin, ovary, nervous system, colon, and breast cancer (11-15). Monitoring the total PC activity in uterine lavage may provide a rapid and non-invasive method for the diagnosis of endometrial cancer in postmenopausal women, and show a complex association between individual PCs and endometrial cancer (16).

Paired basic amino acid-cleaving enzyme 4 (PACE4), also call PCSK6, proprotein convertase subtilisin/kexin type 6. The tissue distribution of PACE4 was widespread, with comparatively higher levels in the liver. The close proximity of the fur and PACE4 genes on chromosome 15 suggests that these genes probably evolved from a common ancestor by gene duplication (17). The human PACE4 gene spans at least 250 kb and is distributed over 25 exons that range in size from 39 to 1,422 base pairs. These results suggest that PACE4 is not a constitutive gene product and its expression is regulated by various transcription factors (18). PACE4 overexpression resulted in enhanced susceptibility to carcinogenesis and tumor progression pointing to a new target for blocking tumor cell invasiveness (10). Knockdown of PACE4 in human breast cancer MDA-MB-231 cells showed significantly reduced proliferation, migration and invasion rates (19). It also confirm the unique role of the proprotein convertase PACE4 in prostate cancer cell proliferation, it has a distinct role in maintaining proliferation and tumor progression in prostate cancer (20,21). Up-regulation of PACE4 expression is associated with SCC conversion to SPCC (22), and participates in bone formation at least in osteoblast differentiation, induce osteoblast differentiation by estrogen receptor-mediated stimuli (23). PACE4 expression was correlated with sustainment of SKOV3 cell proliferation in vitro and in vivo (24). But how PACE4 regulated tumor’s proliferation and invasive? PACE4 expression is specifically unregulated by PDGF-BB in differentiated megakaryoblasts (25). It plays an important role in myogenic differentiation through its association with the IGF-II pathway (26), and may regulate the rate of hypertrophic conversion of ATDC5 cells through activation of proBMP6 (27). There was evidence that CMK-dependent in vivo inhibition of PACE4 activity results in decreased epidermal basal keratinocyte proliferation, tumor development, and metastasis (28).

Our objectives of this study were (I) to immunohistochemically examine PACE4 expression in tumor samples of 172 NSCLC patients, (II) to evaluate the relationships between PACE4 expression and the clinicopathological parameters of NSCLC, and (III) to estimate the prognostic impact of PACE4 on survival in patients with resected NSCLC patients.

A total of 213 paraffin-embedded archived lung cancer samples which were histologically and clinically diagnosed from the Department of Pathology, The First Affiliated Hospital of Guangzhou Medical University, China, between January 2006 and May 2009. The cases selected were based on a distinctive pathologic diagnosis of NSCLC in patients who underwent primary and curative resection, the availability of resected tissue, and follow-up data. None of them had received radiation therapy or chemotherapy before surgery. Prior to the use of these clinical materials for investigation, informed consent from patients and approval from the Institute Research Ethics Committee were obtained. Patients whose cause of death remained unknown were excluded from our study. Of the informative 172 lung cancer tissues, 15 matched adjacent noncancerous tissues were used as controls. The NSCLC cases included 127 (73.8%) men and 45 (26.2%) women, with a mean age of 58.1 years. The average follow-up time was 46 months (median, 36 months; range, 1-111 months). Clinicopathological characteristics for these patients, including age, sex, smoking, lymph node metastasis, tumor size and pathological classification, clinical stage, death, and follow-up time, are detailed in Table 1. The lung adenocarcinomas were reclassified by using the newest guideline (29). Tumor stage was defined according to the American Joint Committee on Cancer/International Union against Cancer tumor-node-metastasis (TNM) classification system (30). 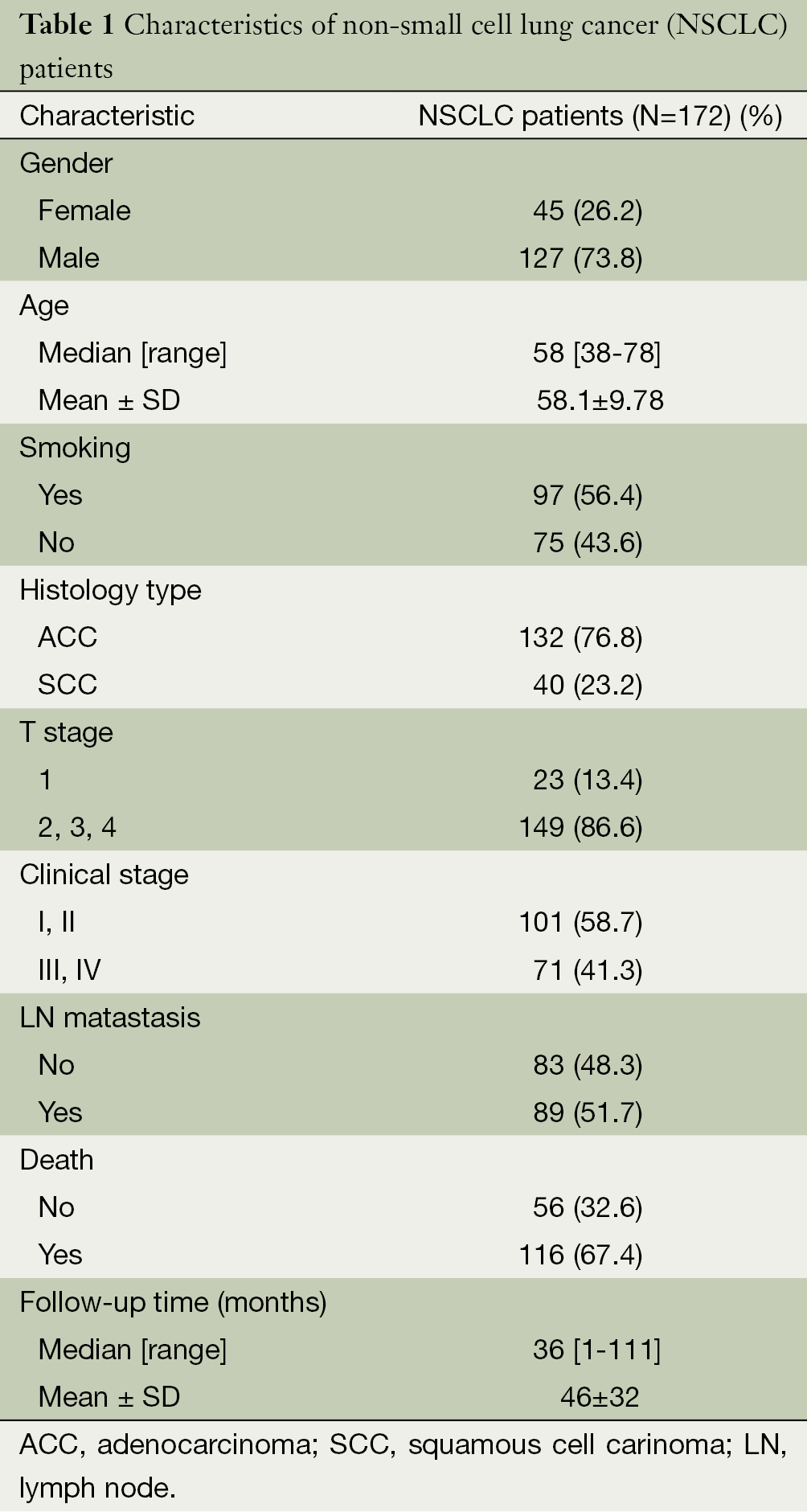 PACE4 expression by quantitative real-time PCR (qRT-PCR) with the SYBR Green I chemistry. Primers of PACE4 were used for the PCR reaction with forward 5'-CTATGGATTTGGTTTGGTGGAC-3'; reverse 5'-AGGCTCCATTCTTTCAACTTCC-3'; GAPDH forward 5'-CTGCACCACCAACTGCTTAG-3'; GAPDH reverse 5'-AGGTCCACCACTGACACGTT-3'. Threshold cycles (Ct) for GAPDH (reference) and PACE4 (sample) were determined in triplicates (shown as arithmetical mean). The quantity of PACE4 in each NSCLC cell line relative to the average expression in 16HBE cells, was calculated using the relative expression levels of PACE4 were given by 2−△△CT, where △Ct = Ct (unknown) − Ct (internal control) (11).

Collect the NSCLC lines (A549, SPC-A-1, H1650, H460, H520, and H1975) and 16HBE cell line, which were harvested and washed thrice with PBS, suspended in PBS and centrifuged on the slides. Slides were fixed with 95% alcohols for 30 min, permeabilized. After 1 hour blocking in PBS +0.1% Tween plus 1% bovine serum albumin, cells were incubated with primary antibodies of PACE4 (1:100 dilution, Rabbit mAb, Abcam) at 37 °C 1 hour, then with secondary antibody 30 min at 37 °C. After counterstaining with DAPI (1 µg/mL) for 10 min, slides were observed and photographed with fluorescence microscopy.

Commercially available antibody against PACE4 (1:100 diluton, Rabbit mAb, Abcam) was used as the primary antibody. Formalin-fixed, paraffin-embedded NSCLC samples were cut into 4-µm thick sequential sections and baked for 3 hours at 58 °C. Then they were deparaffined in xylene and rehydrated in graded alcohols, treated with 3% hydrogen peroxide for 10 min to quench the endogenous peroxidase activity. Antigen retrieved by pressure cooking for 3 min in EDTA buffer (pH 8.0), then the slides were allowed to cool at room temperature. Next, they were preincubated with 10% normal goat serum at room temperature for 30 min to reduce nonspecific reaction. Subsequently, the slides were incubated with mouse monoclonal anti-PACE4 for 2 hours at room temperature. After washing with phosphate-buffered saline, biotinylated secondary antibody was applied for 15 min at 37 °C. Then the sections were incubated with streptavidin–horseradish peroxidase complex and developed with Diaminobenzidine (DAB). Finally, the sections were counterstained with Mayer hematoxylin, dehydrated, and mounted. For negative controls, the primary antibody was replaced by normal rabbit serum. Known immunostaining positive slides were used as positive controls.

Two investigators (Q.N.W. and G.Q.L.) separately evaluated all the specimens without knowledge of the clinical features of the cases. Variant cases were reviewed and discussed until a consensus was obtained. Five areas were selected at random and scored. The percentage of tumor cells with positive staining of PACE4 was determined at high magnification (×200). For PACE4, cytoplasmic immunostaining in tumor cells was considered to be positive. Tissue was scored (H score) based on the total percentage of positive cells and the intensity of the staining (1+, 2+, or 3+), where H = (%1+ ×1) + (%2+ ×2) + (%3+ ×3). The sample was considered negative if H=0 and positive if H was more than 0 (31).

All statistical analyses were performed using the SPSS 16.0 statistical software package. Because of the non-normal distribution of protein expression, statistical evaluation was performed using nonparametric tests. The correlation between PACE4 expression and clinicopathological status of NSCLC patients was assessed by chi-square test. Survival curves for both PACE4 positive-expression and PACE4 negative-expression patients were plotted using the Kaplan-Meier analysis and log-rank test. Univariate and multivariate regression analysis were performed with the Cox proportional hazards regression model to determine the effect of particular prognostic factors on survival. Further analyses of survival curves were computed based on stratifying histology type and clinical stages. Survival time was calculated from the date of lung cancer diagnosis to the date of death for any cause. In all cases, differences with P<0.05 were considered statistically significant. 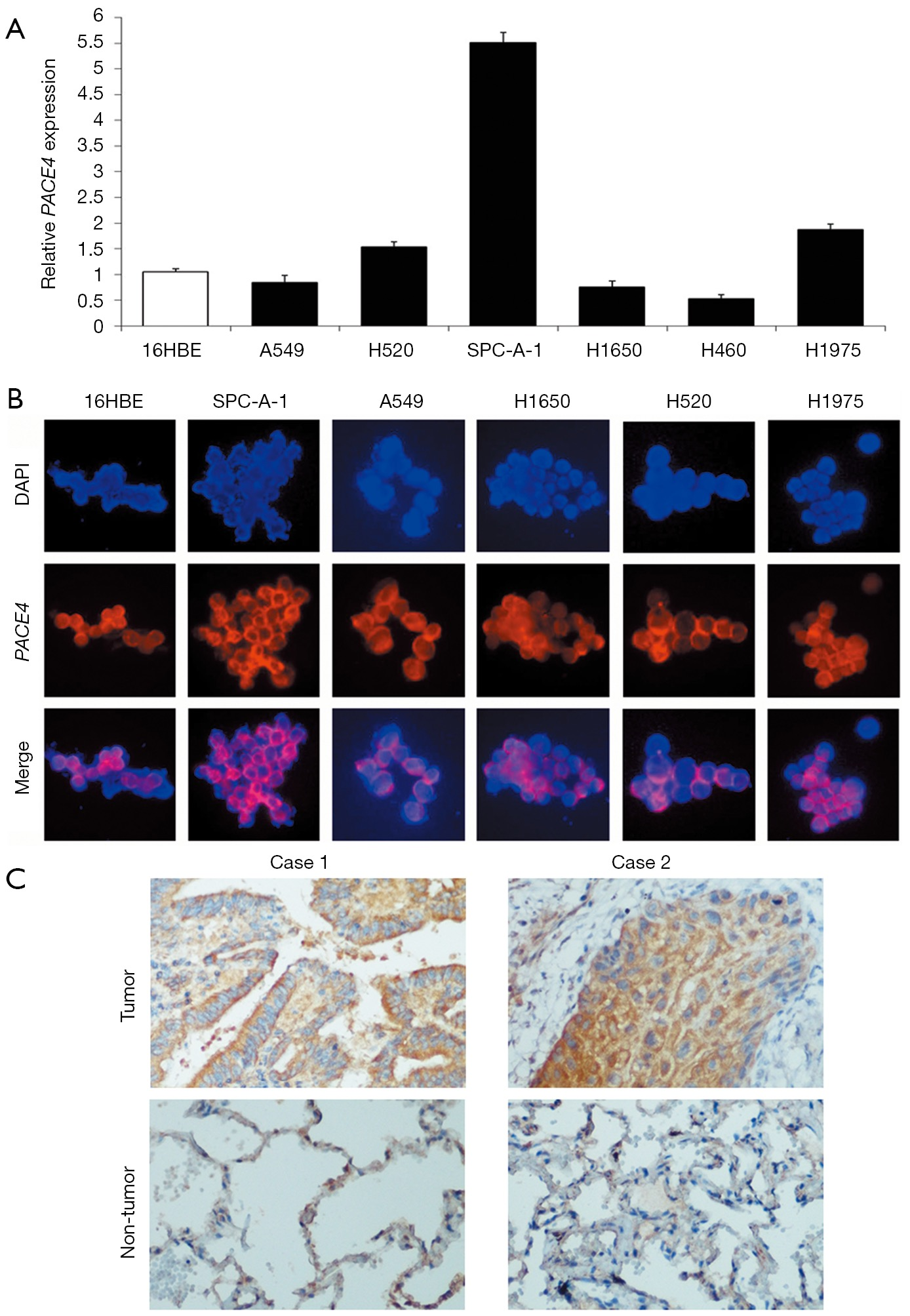 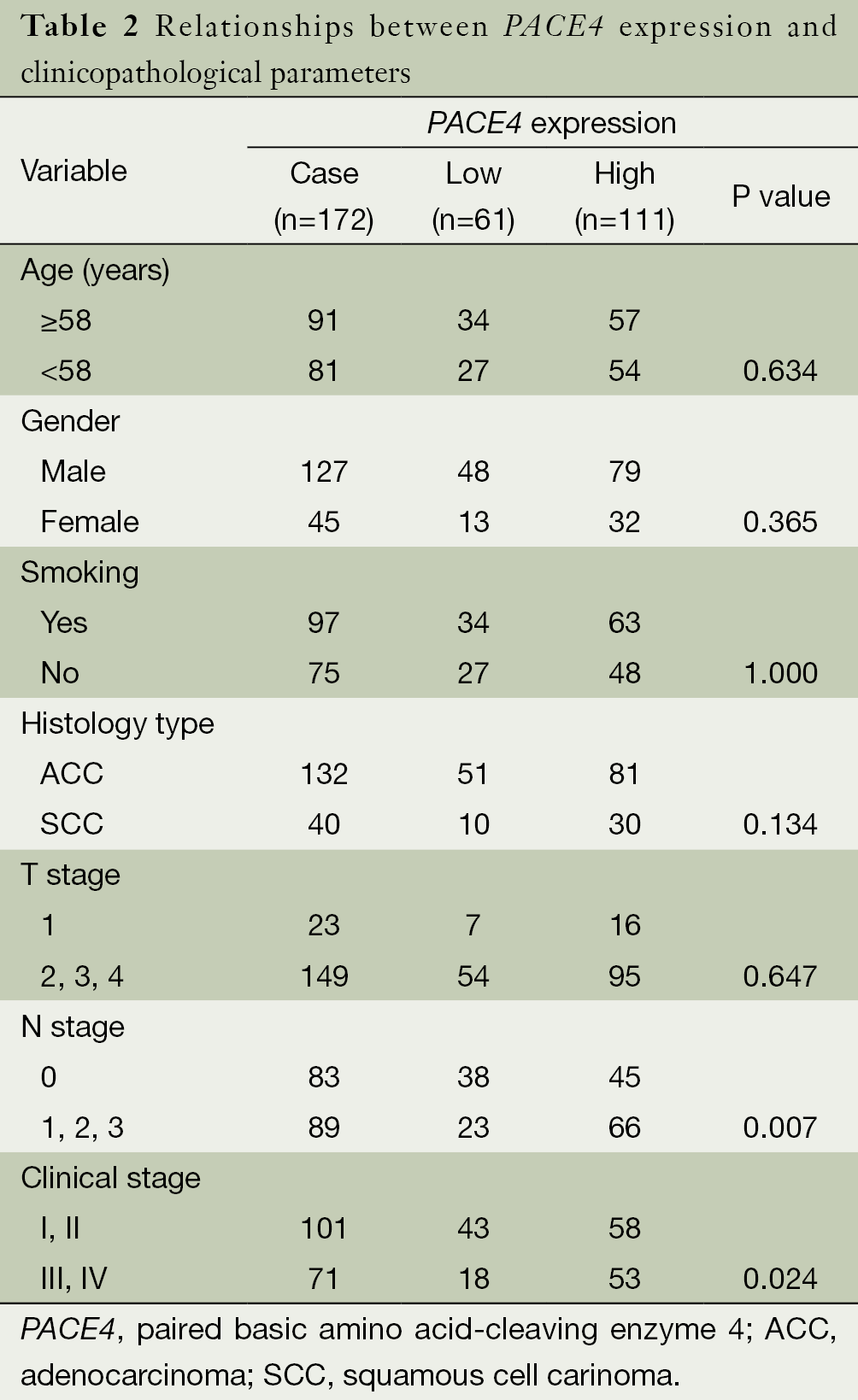 The relationship between PACE4 expression and clinicopathologic parameters

The association of PACE4 positive expression in NSCLC with poor survival 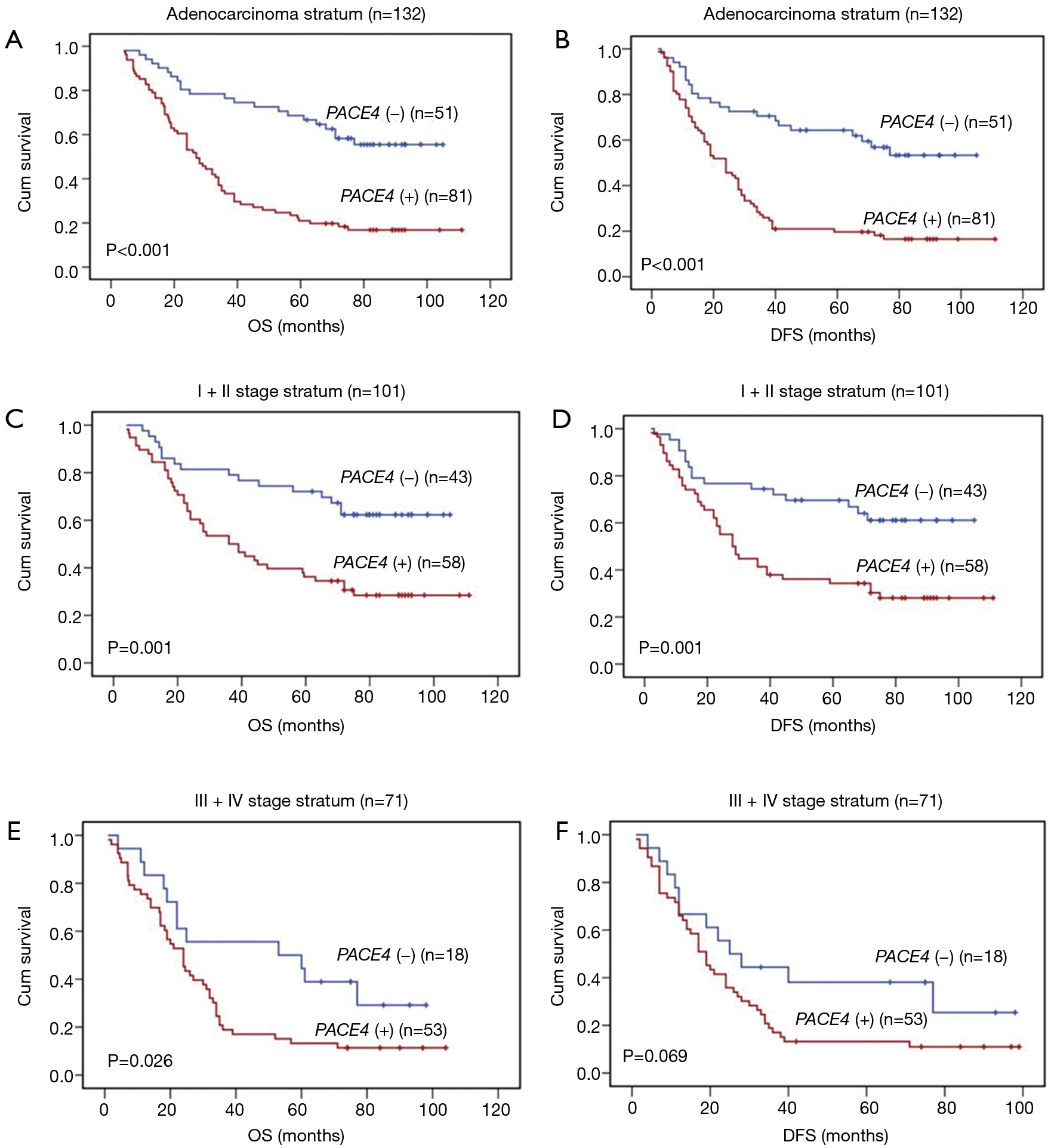 Univariate and multivariate analyses of prognostic variables in patients with NSCLC

Further, we analyzed the associated with the PACE4and Clinicopathologic Parameters and survival of resected NSCLC patients. PACE4 positive expression was significantly associated with poorer OS and DFS, the decreased OS and DFS probability among clinical stage and adenocarcinoma patients, especially stage I/II subgroup and adenocarcinoma subgroup (P<0.0001). Our findings also revealed that PACE4 expression was significantly associated with clinical stage and nodal status in NSCLC. These results suggest that PACE4 expression may be important for the acquisition of migration and invasion capabilities of tumor cells, which subsequently results in poorer prognosis in patients with resected NSCLC. And how PACE4 lead to short survival time in lung cancer patients? Previous reports suggest that, over-expression in a stable manner of alpha1-PDX and the prosegment ppPACE4 in MDA-MB-231 breast cancer cells resulted in increased matrix metalloproteinase (MMP)-9 activity and a reduced secretion of tissue inhibitor of metalloproteinase 1 (TIMP-1). This was associated with significant enhancement in cell motility, migration, and invasion of collagen in vitro (33). Targeting both furin and PACE4 to the epidermis in double transgenic mice did not have an additive effect on tumor incidence/multiplicity but did enhance the tumor histopathologic grade (34). PACE4 play a direct role in sustained prostate cancer progression is most likely through the upregulated processing of growth factors or through the aberrant processing of growth factors (32). And its expression is also controlled by E-box elements in HepG2 and GH4C1 cells (35). The highest PACE4-level and related TF expression indicated of the strongest malignancy and invasiveness. It was significantly found that miR-124 was presented with the biggest odd to target PACE4-3'UTR, the capability of decreasing PACE expression and slowing down cell growth and cell invasion. It was clear that PACE4 level was closely associated with malignancy and invasiveness of PCa in vivo or in vitro. MiR-124 played a crucial role inhibiting PACE4 transcription thus exhibiting obvious effects of antiproliferation and antiaggression of PCa (36). In the present study the possible role of PACE4 as a trigger of malignant conversion by transfecting with a full-length PACE4 cDNA, three keratinocyte cell lines with no or little tumorigenic potential, invasion and MMP processing were remarkably reduced when PACE4 was inhibited with a specific antibody. PACE4 is not only able to enhance the invasive ability of malignant cells as demonstrated previously, but also played a significant role in converting non-invasive keratinocytes into malignant cells (37). Furin and PACE4 process stromelysin 3 (MMP-11 or Str-3), an MMP involved in tumor invasion, into its mature, active form. Similarly, a growing family of MMPs, known as membrane-type metalloproteinases (MT-MMPs), and growth factors and adhesion molecules such as E-cadherin show similar amino-acid motifs and thus could be activated by furin and PACE4 (38). Promoter analysis indicated that two E2F consensus binding sites (-117/-110  and -86/-79) in the 5'-flanking region of the human PACE4 gene function as positive regulatory elements. Mutation of these sites abolished PACE4 promoter response to E2F1 as well as binding of E2F1 in electrophoretic mobility-shift assays. Other E2F members, E2F2 and E2F3, also activated PACE4 expression, as in the case of E2F1. These results indicate a novel mechanism for E2F family-mediated promotion of carcinoma invasiveness through PACE4 (39). PACE4 overexpression and activity accounts for an increased proliferation rate, exaggerated sensitivity to the PC inhibitor CMK, and interference with IGF-1R autophosphorylation. Mice overexpressing PACE4 exhibited tumors of increased growth rate and invasive potential when exposed to the human carcinogen B(a)P, further supporting the significance of PCs in tumor growth and progression (40). We hypothesized whether it is through these mechanisms that PACE4 to regulate the lung cancer, it is our future research.

In conclusion, we have provided the first clinical evidence that PACE4 is expressed in a subset of NSCLC and its expression is related to clinicopathological factors. We demonstrated that PACE4 expression is a prognostic indicator of poor survival among patients with resected NSCLC, although its prognostic significance still requires confirmation with larger patient populations.

Funding: This work was supported by grants from the National Natural Science Foundation of China (No. 8120184).