Surgery is the most effective treatment of early stage lung cancer. Since the development of minimally invasive surgery, video-assisted thoracoscopic surgery (VATS) is now the most commonly used procedure, and VATS lobectomy has become a standard surgical procedure for stage I non-small cell lung cancer (NSCLC). In terms of surgical outcomes, VATS lobectomy has a number of advantages over open thoracotomy (1); including less postoperative pain, shorter hospital stays, fewer complications and earlier functional recovery (2). Therefore, VATS lobectomy is currently performed for the treatment of lung cancer in most Korean hospitals.

According to the NCCN (National Comprehensive Cancer Network) guidelines, non-small cell lung cancer, version 3.2020, VATS should be strongly considered for NSCLC patients with no anatomic or surgical contraindications, provided the standard oncologic and dissection principles of thoracic surgery are not compromised. According to these guidelines, VATS should be performed when complete resection is possible. However in the case of severe pleural adhesion it is doubtful that complete resection can always be successfully performed. In the case of whole pleural adhesion, the operation time is long, the field of view is poor, and the tumor can be easily touched by surgical instruments, so there is a risk of potential tumor dissemination. In particular, in the case of whole pleural adhesions where the entire pleura and lung are attached, there may not even be a space where a thoracoscope can be inserted. While most surgeons can perform VATS lobectomy with pleural adhesiolysis to treat lung cancer, there has been little research done on the prognosis of lung cancer when VATS is performed in cases of severe whole pleural adhesion. Particularly in the case of peripheral lung cancer with visceral pleural invasion, it is questionable as to whether VATS is a safe operation.

The purpose of this study was to evaluate, in cases of stage I NSCLC treated by VATS, the prognostic effect of whole pleural adhesion when the tumor has undergone visceral pleural invasion. We set out to determine whether whole pleural adhesion is a risk factor for recurrence of tumor when performing VATS lobectomy for stage I NSCLC with visceral pleural invasion. We present the following article in accordance with the STROBE reporting checklist (available at http://dx.doi.org/10.21037/jtd-20-1840).

The study was conducted in accordance with the Declaration of Helsinki (as revised in 2013). This study was approved by the institutional review board of Seoul St. Mary’s Hospital at the Catholic University of Korea and individual consent was waived (Referral number: KC20RISI0343).

Patients diagnosed with clinical stage I lung cancer on the basis of chest computed tomography (CT) and positron emission tomography (PET)/CT scans, were deemed eligible for surgical treatment. As per ESTS (European Society of Thoracic Surgeons) guidelines, preoperative invasive nodal staging was not performed routinely on these patients because all tumors were peripheral and less than 3 cm in size (3).

All clinical specimens and pathology reports were reviewed. Pathology reports included: histologic type, tumor size, tumor location, histologic tumor grade, visceral pleural invasion and lymphovascular invasion. Visceral pleural invasion was defined as tumor extending beyond the elastic layer. Lymphovascular invasion was defined as tumor cells present in lymphatic or vascular lumina. If the findings could not be determined using hematoxylin-eosin staining alone, special staining such as Verhoeff-Van Gieson elastic staining was performed as necessary. In particular, Verhoeff-Van Gieson elastic staining was performed for the detailed evaluation of visceral pleural invasion in those patients with visceral pleural invasion. TNM staging was based on the 8th edition of the TNM staging system of lung cancer (5). To determine the T category according to the 8th edition, tumor size was measured by the pathologist at the greatest diameter of the invasive component on a histopathological preparation (6).

Clinicopathological factors were compared using a Student t test or the Wilcoxon rank sum test for continuous variables and chi-squared or Fisher exact test for categorical variables. The Kaplan-Meier method was used to analyze data collected from the interval between the time of operation and the time of the last follow-up visit. Recurrence-free survival (RFS) rates and disease-specific survival (DSS) rates were estimated by the Kaplan-Meier method. Survival of each group was compared by log-rank test. A Cox proportional hazards model was used in a multivariate analysis to identify risk factors for recurrence after surgery. All variables with P<0.10 on univariate analysis were entered into the multivariate analysis. A P value of less than 0.05 was considered statistically significant. Statistical analysis was performed using SPSS version 24.0 software (IBM Corp, Armonk, NY, United States). 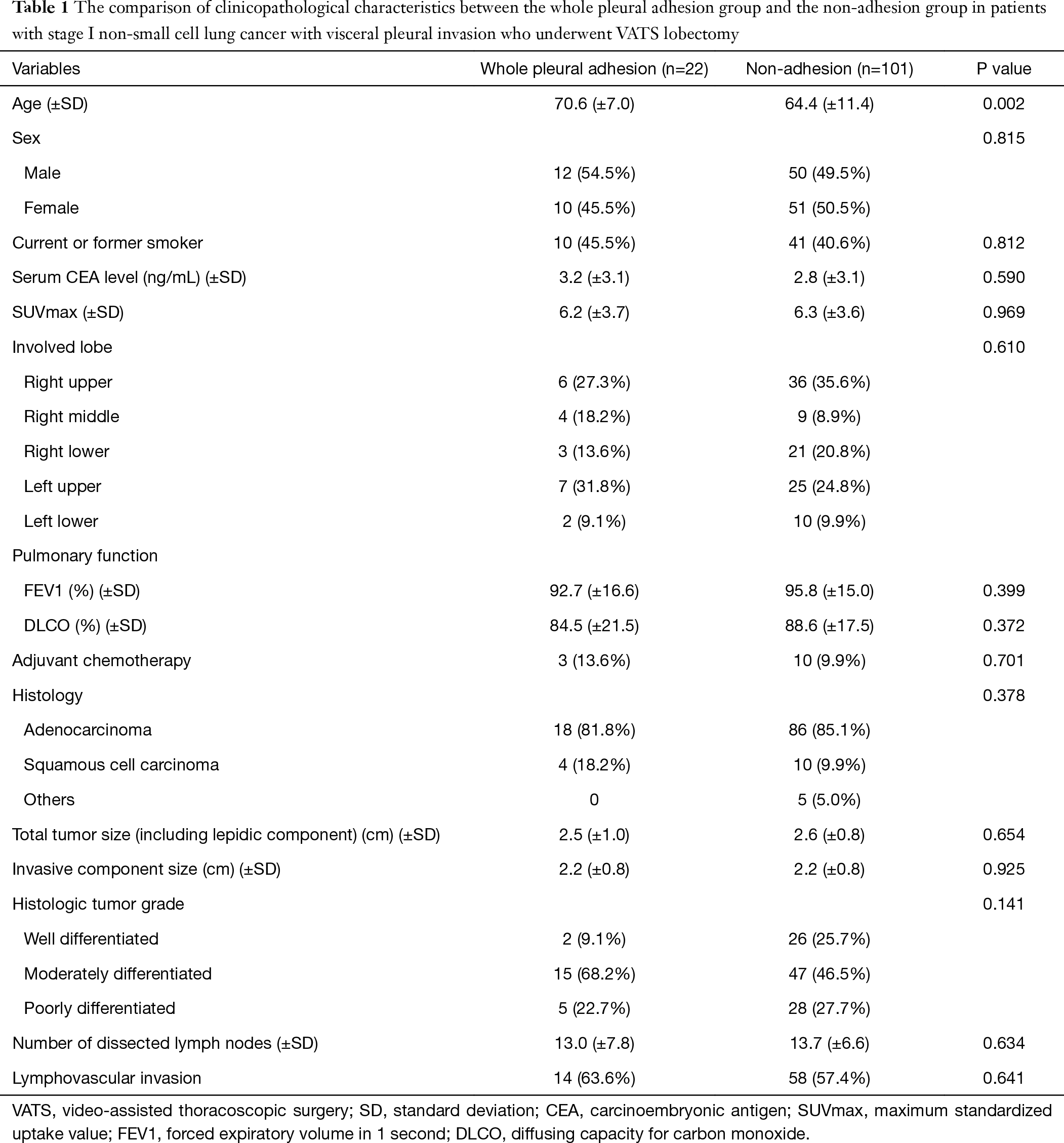 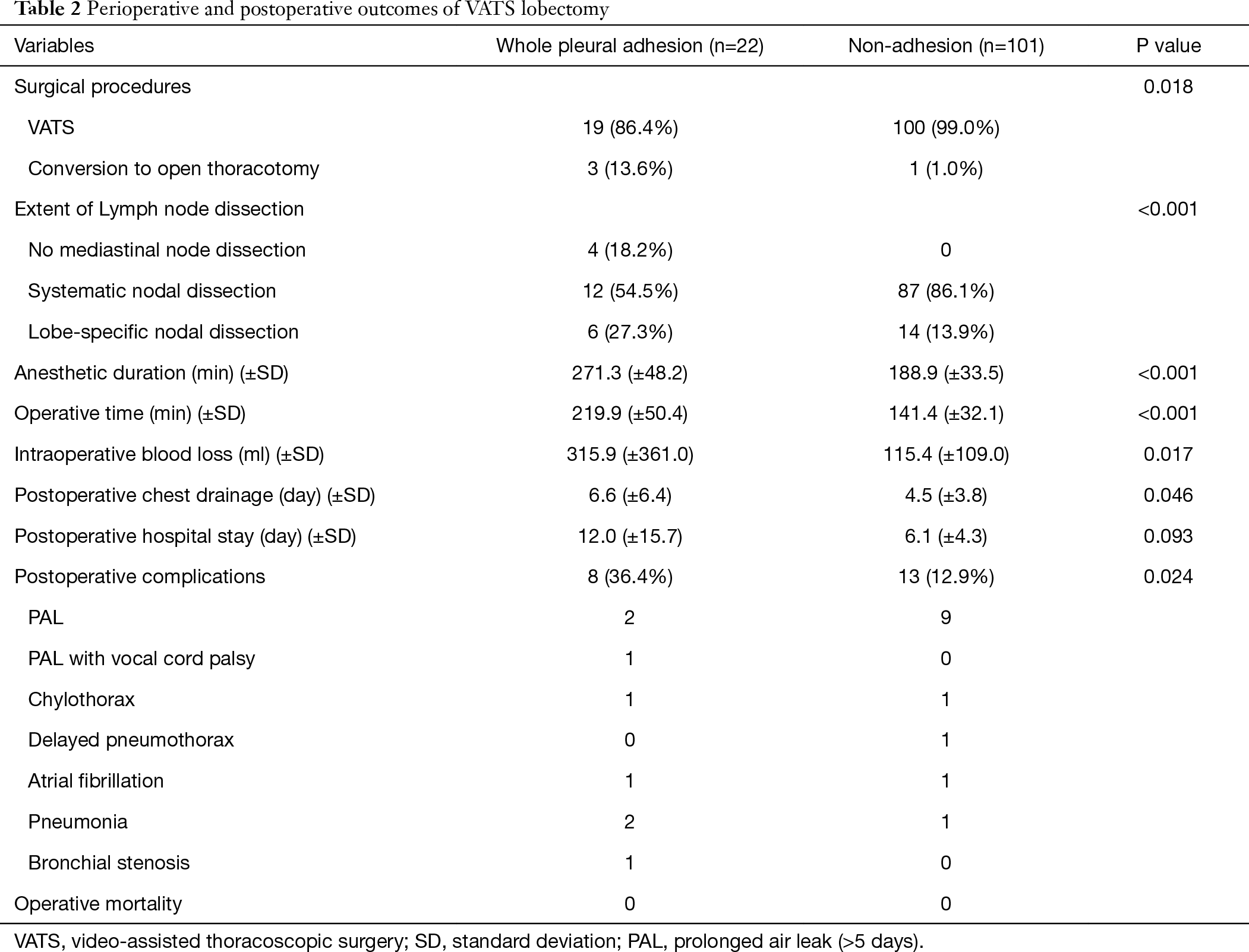 Figure 2 Comparisons of (A) recurrence free survival and (B) disease-specific survival between the whole pleural adhesion group and the non-adhesion group in patients with stage IB non-small cell lung cancer with visceral pleural invasion after video-assisted thoracoscopic lobectomy. 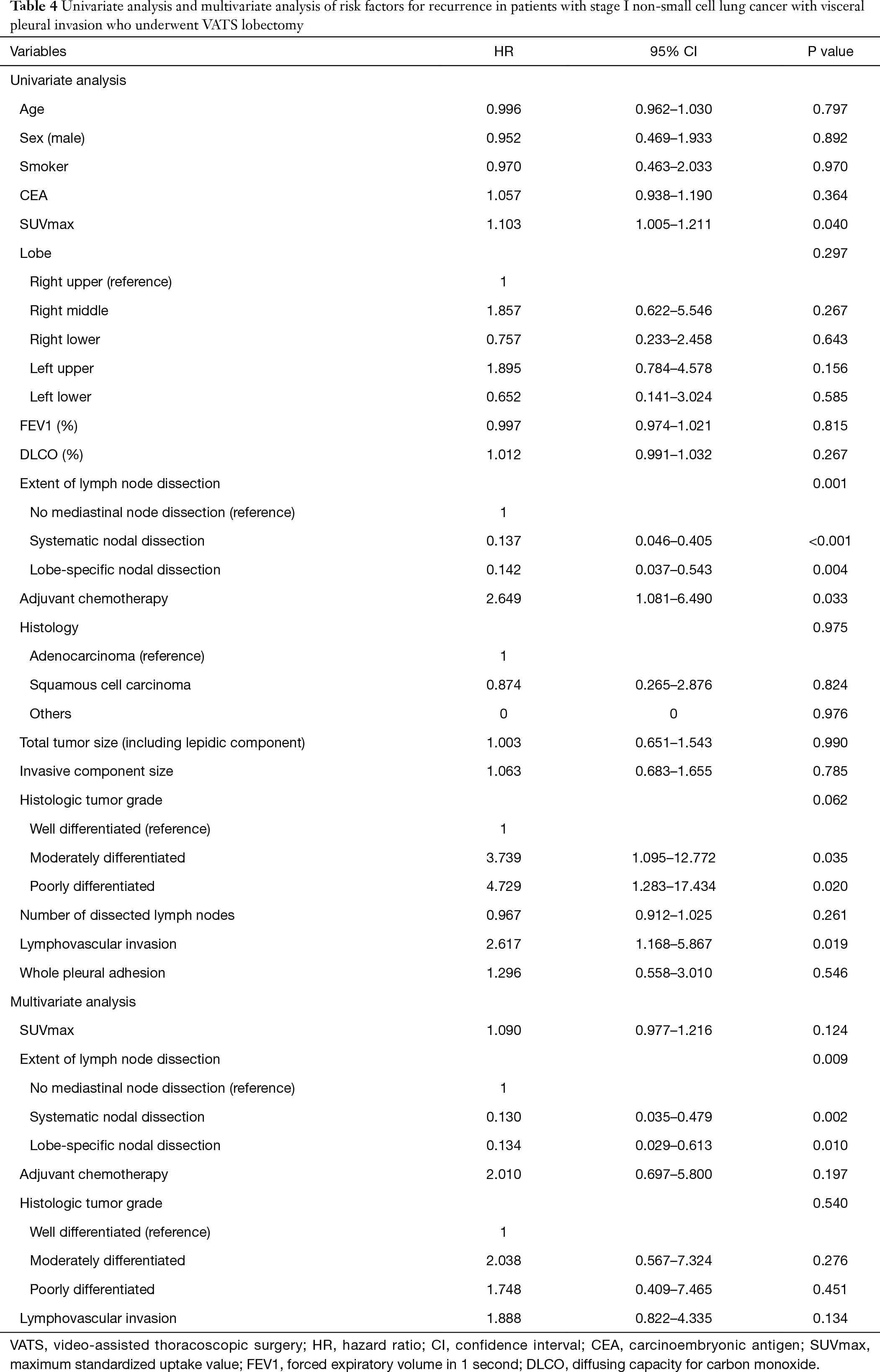 In this study, we conducted a study on consecutive patients who had undergone lung cancer surgery in a hospital over an 8-year period and who met the inclusion criteria. The hospital, a tertiary hospital in Korea, performs over 250 lung cancer surgeries a year. All patients were consecutive patients, thus reducing the selection bias. Cases of partial pleural adhesion were excluded because the degree of partial adhesion in different patients was very diverse, making it impossible to objectively evaluate the effect of adhesion. As a result, only patients with stage I NSCLC with whole pleural adhesion and visceral pleural invasion were included in the study group, resulting in a relatively small total number of patients; that is, a whole pleural adhesion group (the study group) of 22 patients, and a non-adhesion group (the control group) of 101 patients. However, by conducting a study in a group of patients who had all undergone the same standardized type of surgery, the effect of pleural adhesion could be more accurately evaluated. Therefore, the results of this study, using data from patients who had undergone the same type of surgery, may be more accurate than those from a multi-center study in which various surgeries are applied by many surgeons.

This study had several limitations that should be considered. Firstly, we used a retrospective study design. Secondly, we obtained data from a single institution with a relatively small sample size, so generalizing our results is difficult. However, the study patients were treated by a standardized surgical procedure at single institution. Furthermore, a detailed analysis was possible because of the detailed data contained in the electronic medical records. We also used detailed data from photos or videos of surgical procedures, pathological specimens and pathological reports. We believe that our data can be used as the basis for future investigations and that our results may be further clarified and refined by future studies with larger patient populations. Finally, the follow-up period was relatively short. However, recurrence of NSCLC is most commonly reported within a 2-year postoperative period (19), and early recurrence seems to be an accurate indicator of the long-term outcome (20).

Reporting Checklist: The authors have completed the STROBE reporting checklist. Available at http://dx.doi.org/10.21037/jtd-20-1840

Conflicts of Interest: All authors have completed the ICMJE uniform disclosure form (available at http://dx.doi.org/10.21037/jtd-20-1840). The authors have no conflicts of interest to declare.

Ethical Statement: The authors are accountable for all aspects of the work in ensuring that questions related to the accuracy or integrity of any part of the work are appropriately investigated and resolved. The study was conducted in accordance with the Declaration of Helsinki (as revised in 2013). This study was approved by the institutional review board of Seoul St. Mary’s Hospital at the Catholic University of Korea and individual consent was waived (Referral number: KC20RISI0343).