The revolution of robotic-assisted thoracic surgery has provided surgeons with high magnification imaging, ergonomic articulation of instruments (7 degrees of freedom), elimination of fine tremors, with a state-of-the-art master-slave console system for enhanced operator comfort. Since early reports of successful robotic-assisted lobectomy in 2002 (5), it has become an increasingly popular platform for oncological thoracic resection, demonstrating respectable perioperative and long-term outcomes (6,7).

In South East Asia, completely portal robotic lobectomy (CPRL4) is still in its early infancy and sparsely reported in the medical literature. The aim of this study is to evaluate the feasibility of completely portal robotic lobectomy (CPRL4) for patients with early stage non-small cell lung cancer (NSCLC), analysing the perioperative and mid-term results.

We present the following article in accordance with the STROBE reporting checklist (available at http://dx.doi.org/10.21037/jtd-20-1915).

This is a single-institution retrospective cohort study of consecutive patients who underwent CPRL4 for early stage NSCLC from June 2013–November 2017. This study was approved by the Domain Specific Review Board National Health Care Group (Singapore), with waiver of patient consent (Study Reference Number 2017/00762). The study was conducted in accordance with the Declaration of Helsinki (as revised in 2013). All procedures were carried out by a single surgeon at an academic and training institution in Singapore.

Eligibility for curative R0 surgical lobectomy included biopsy-proven or highly suspected primary NSCLC lung without locally advanced extra-thoracic disease demonstrated on computed tomography (CT) of the thorax and full body positron emission tomography-CT (PET-CT). Only subjects with NSCLC pathological stage I and stage II [7th edition of American Joint Committee on Cancer Staging (8)] were enrolled in the study. Although the latest 8th edition of TNM staging has been effective worldwide since 2018, these patients were treated during the time when the 7th edition of TNM staging was in effect. Hence, the 7th edition of TNM staging was used in this study. Small-cell lung cancers, carcinoid, metastatic or benign lesions and rare thoracic parenchymal malignancies were excluded. To minimise bias, robotic resection was offered to all patients who fulfilled the above criteria. Before the introduction of the robotic platform, this cohort of patients would have otherwise had undergone open or video assisted thoracoscopic lobectomy. Patient who underwent robotic segmentectomy and wedge resections were excluded from this study as well.

Preoperative, intraoperative and postoperative data were extracted from existing medical records. Conversion was defined by rib-spreading thoracotomy after docking of the robot. Major morbidity and complication were defined according to The Society of Thoracic Surgeons database’s definitions. Upon discharge, all patients were reviewed at two weeks with chest X-ray followed by interval 6 monthly CT chest. If suspicious lesions (>8 mm) were found, PET/CT would be performed along with other relevant investigations. Overall survival and recurrence-free survival were recorded from date of operation to date of death or last trackable follow-up.

Continuous data was presented in frequencies and percentages, while categorical data was expressed in median and range. Overall survival and recurrence-free survival were analysed by using Kaplan-Meier method and compared by Log-rank test. All analyses were performed with SPSS statistical software version 25. 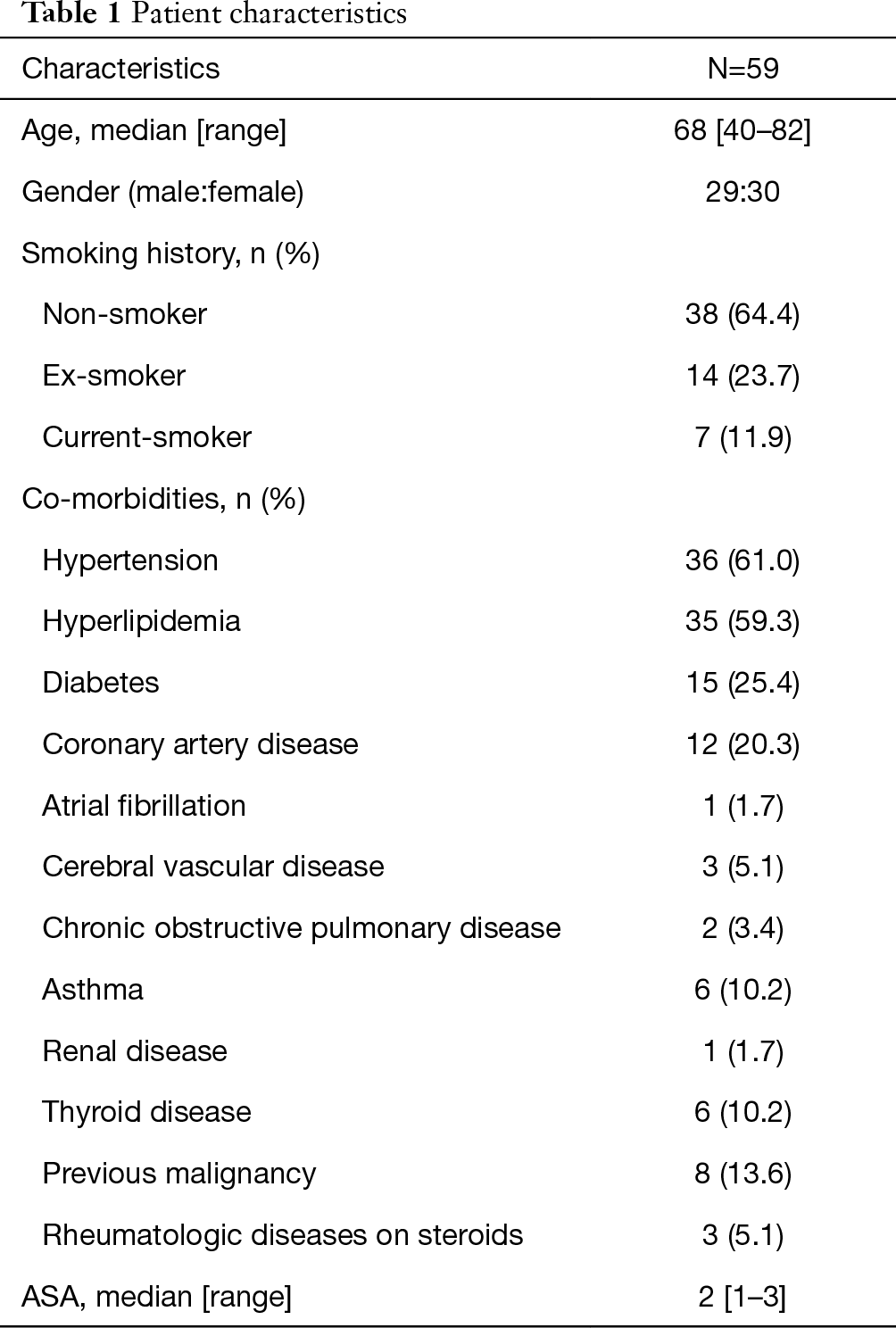 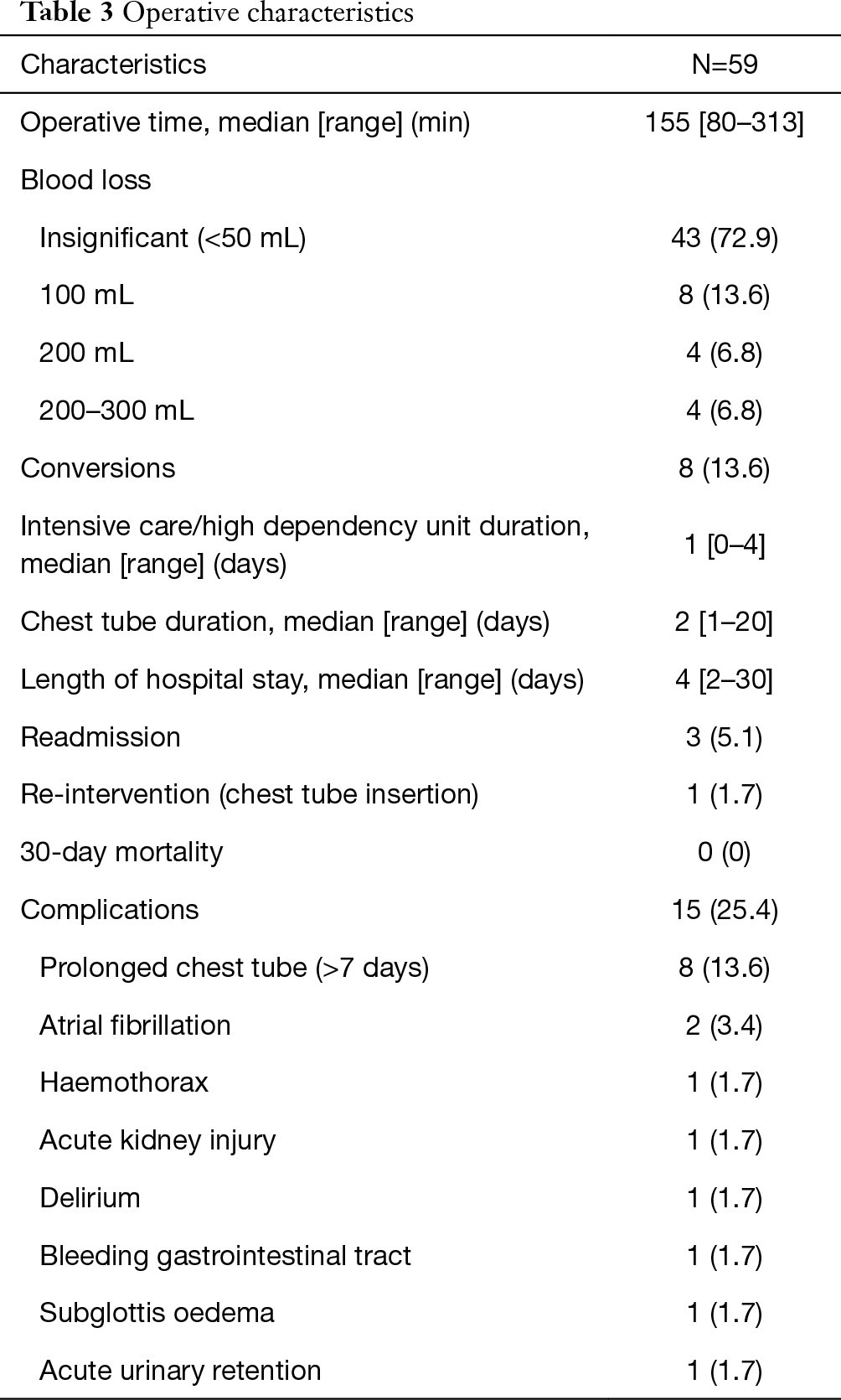 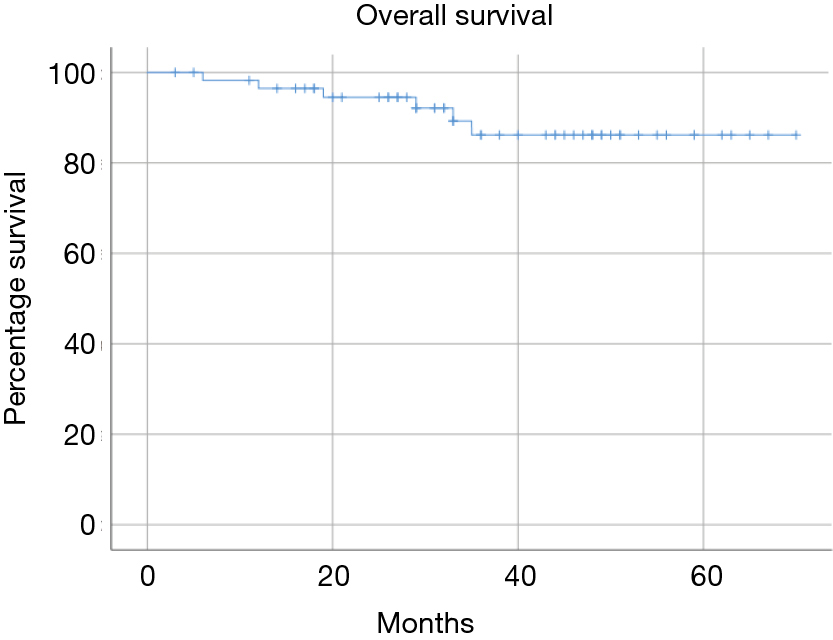 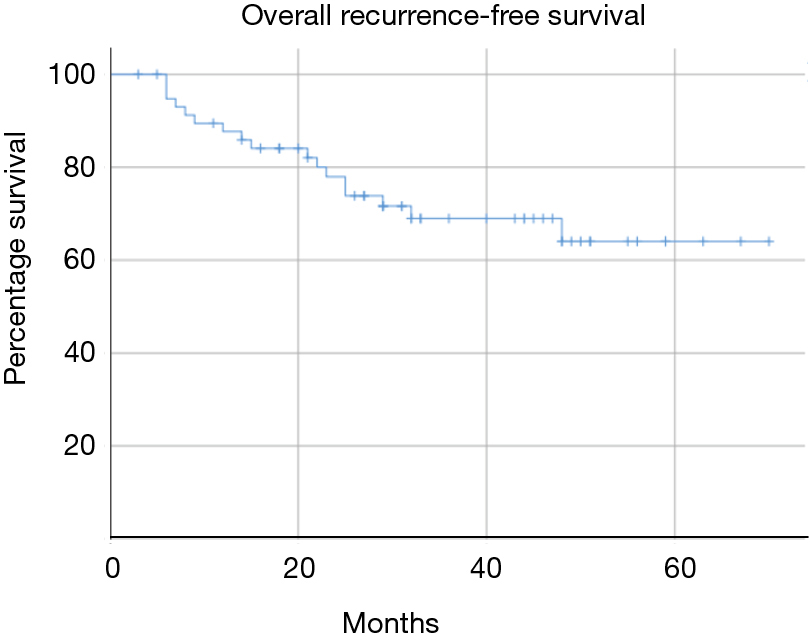 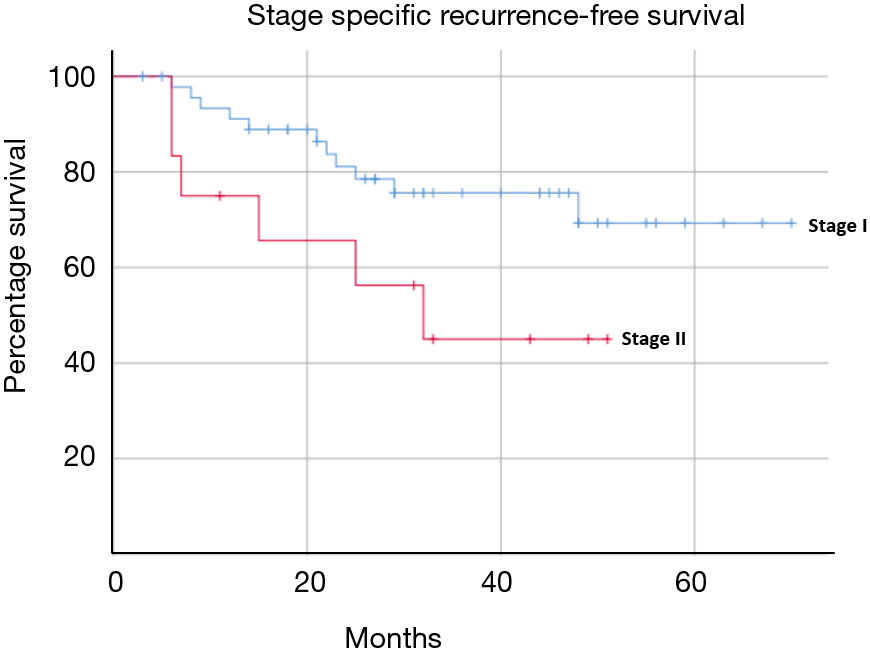 The true value of an oncological resection lies in the intent for cure and quality of life, whilst balancing the cost and downtime to the patient. Numerous studies in the literature have demonstrated reassuring results of the utility of robotic-assisted lobectomy for primary lung cancer (6,7,10,11). Cerfolio and colleagues published the largest multicentre series of 1,339 patients who underwent robotic lobectomy for primary lung cancer. They reported median operative time 136 minutes, 9% conversion rate, median hospital stay of 3 days (7). 8% experienced major complications, 16% minor complications with a 0.2% 30-day mortality. The 5-year stage-specific survival for patients with stage I&II NSCLC ranged from 68% to 83%. Another large series of robotic-assisted lobectomy for early stage NSCLC by Park and colleague that showed 3-year overall survival rates of Stage IA 97% (95% CI, 94–100), Stage IB 88% (95% CI, 77–98), Stage II 72% (95% CI, 56–88) (6). Comparing VATS and robotic-assisted lobectomy for NSCLC, a multi-centre meta-analysis concluded that there were no significant differences in peri-operative morbidity and mortality in both groups (11). In a similar vein, Lee and colleagues reported 15.2% and 13.2% nodal upstaging in patients with clinically N0 NSCLC for the VATS and robotic-assisted approach respectively (10). Despite inclusion of the learning curve, key quality outcome indicators in this study such as operative time, conversion rate, length of hospital stay, complication rate, operative mortality, nodal upstaging rate and mid-term overall survival were comparable to other studies in the literature (6,7,9,10).

Fortunately, the learning curve for the robotic-assisted approach is less steep in contrast to VATS (11). In addition, it has been demonstrated that training of surgical residents to perform robotic-assisted lobectomy whilst maintaining high quality outcomes was feasible (12). In this series, to bridge this learning curve, we set out to create protocols and training for the entire robotic surgery team. This involved multiple bi-monthly dry runs of docking and operating the robot with the aid of a simple laparoscopic training manikin and response to common critical intra-operative situations such as bleeding and non-progression of the case. Subsequently, we sought to adopt the use of the robotic-assisted approach in mediastinal operations and pulmonary wedge resections prior to embarking on the anatomical lobectomy. In our entire consecutive series of robotic lobectomy for primary lung cancer, there were 6 patients who were pre-operative clinical stage 3A and 4 patient stage 4 (Oligo-metastasis) there were not included in this study. These would be considered as locally advanced resectable lung cancer and they will be analysed separately in another paper. Also, 2 patients were not offered the robotic assisted approach. One patient had cost issues while another had extensive hilar fibrosis post neoadjuvant chemoimmunotherapy. Nevertheless, cost is a major concern. Studies revealed that robotic cases cost at least $3,000 USD more than VATS (13,14), largely owing to the longer operating time and robotic supplies. It costs approximately $100K–170K USD annually to maintain the robot (11).

There are a number of limitations in this study. The retrospective nature of the study is invariably subjected to selection bias. As the sample size is small, type 2 error is pronounced. Other important measurables such as pain score, functional status, lung function, cost effectiveness and long-term survival and recurrence will be analysed in future papers.

By clearly defining CRPL4, setting guidelines and following strict algorithms, it is possible to delivery promising perioperative and mid-term outcomes for early stage NSCLC, even in a geographical location that has yet to assimilate this technology.

Reporting Checklist: The authors have completed the STROBE reporting checklist. Available at http://dx.doi.org/10.21037/jtd-20-1915

Conflicts of Interest: All authors have completed the ICMJE uniform disclosure form (available at http://dx.doi.org/10.21037/jtd-20-1915). The authors have no conflicts of interest to declare.

Ethical Statement: All authors are accountable for all aspects of the work (if applied, including full data access, integrity of the data and the accuracy of the data analysis) in ensuring that questions related to the accuracy or integrity of any part of the work are appropriately investigated and resolved. The study was conducted in accordance with the Declaration of Helsinki (as revised in 2013). This study was approved by the Domain Specific Review Board National Health Care Group (Singapore), with waiver of patient consent (Study Reference Number 2017/00762).