Hypertrophic cardiomyopathy (HCM) is the most common inherited heart disease, with a prevalence of 0.02% in the general population. It is an important cause of sudden cardiac death (SCD) (1). Approximately 2/3 of patients who have a left ventricular outflow tract obstruction (LVOTO) need surgery to control the symptoms and reduce the risk of SCD. Septal myectomy is the standard treatment for patients who have a good prognosis (2,3). There are many factors associated with SCD in these patients, including maximum left ventricular wall thickness (4,5). HCM patients with extreme interventricular septal thickness (IVST) may represent a special cohort. However, most of these studies are all based on HCM patients, both obstructed and non-obstructed (6-8). Few studies have reported the surgical outcomes of patients with extreme IVST who underwent septal myectomy. Therefore, in the present study, we retrospectively studied this special cohort and compared the survival rate with patients matched by age, sex, and body mass index.

We present the following article in accordance with the STROBE reporting checklist (available at http://dx.doi.org/10.21037/jtd-20-1705).

We retrospectively studied 47 hypertrophic obstructive cardiomyopathy (HOCM) patients with IVST ≥30 mm and 94 patients with IVST <30 mm who underwent surgical treatment at Anzhen Hospital in Beijing between 2011 and 2018. This was a single-center retrospective study. The Control Group (patients with IVST <30 mm, N=94) were enrolled from the same center and the IVST ≥30 mm was matched in a ratio of 2:1 based on age, sex, and body mass index and were randomly selected from subjects who underwent septal myectomy during the same period. The diagnostic criteria and surgical indications of HCM were consistent with the 2011 American Heart Association/American College of Cardiology guidelines and the 2014 European Society of Cardiology guidelines, which mainly include unexplained septal hypertrophy with a thickness >15 mm. The indications for septal myectomy were (I) severe symptoms or syncope or near-syncope despite optimal medical therapy, (II) LV outflow tract (LVOT) gradient >50 mmHg at rest or with provocation.

All patients signed informed consent forms, including those for their biomarker analysis and clinical data, prior to enrollment. The study was approved by the Ethics Committee of Anzhen Hospital (Ethic committee study number: 2020034X). All procedures were conducted in accordance with the ethical principles stated in the Declaration of Helsinki (as revised in 2013).

Transthoracic echocardiography was performed in each patient using an E9 ultrasound system. Echocardiographic examinations were performed by the same physician. The diameter of the cardiac chambers was expressed as the maximum value of the anteroposterior diameter in the cardiac cycles. The diameter of the ascending aorta was approximately 4 cm above that of the aortic valve during diastole. The thicknesses of the IVS and ventricular wall were determined during diastole. Besides the maximum thickness, the representative thickness of the IVS, which is usually the thickness of the point 25 mm under the right coronary sinus nadir, was also recorded to indicate the overall thickness. The LVOT gradient was calculated using the simplified Bernoulli equation. The measurements of the left ventricular ejection fraction were determined according to the American Society of Echocardiography recommendations (9).

All the patients underwent the extended Morrow procedure. First, a standard median sternotomy was performed. Cardiopulmonary bypass was then performed using ascending aortic cannulation and bicaval cannulation. Myocardial protection was achieved with the antegrade (HTK). The resection ranges were as follows: the upper end was located approximately 4 mm below the aortic ring; the lower end was extended toward the apex; from the right side, the myectomy was started slightly rightward to the nadir of the right aortic cusp, and to the left, resection was terminated near the mitral anterior commissure. Elongated leaflets were not routinely folded, unless severe regurgitation or systolic anterior motion remained after resection. The related operations were appropriately performed based on preoperative evaluation and intraoperative exploration. Detailed information has been described in our previous study (10).

The clinical status of the study population was obtained through telephone interviews with the patients or their family members at least once a year after surgery. Patients who died were treated as endpoints, and the follow-up time was defined with regard to the day the patient died. The last follow-up of the survivors was conducted in December 2019. The clinical endpoint in this study was defined as all-cause death, including sudden cardiac death (SCD), death related to congestive heart failure and other cardiovascular diseases, or noncardiac death. In addition, all patients in the present study completed the follow-up.

In the present study, we performed a propensity score match for the variables according to the presence of extreme IVST (≥30 mm): age, sex, and BMI. Matching was performed using the nearest neighbor method, assigning patients with diabetes and without diabetes in a 1:2 ratio, with a 0.2 caliper width. The equalization test after matching is shown in Table S1 and Figure S1. The Kolmogorov-Smirnov test was used to assess the normal distribution of continuous variables. The results are expressed as mean ± standard deviation, median (interquartile range), or percentage, as appropriate. The Student t-test for independent samples and the Mann-Whitney U test were used to compare continuous variables, and the χ2 or Fisher exact test was used to compare nominal variables, as appropriate. The Kaplan-Meier method was used to calculate survival free from the worse clinical outcomes. A log-rank test was used to compare survival curves among the different patient groups. Univariable and multivariable Cox regression analyses were used to assess the association of individual variables with all-cause death. Age, sex, body mass index, and variables with P<0.1 on univariate analysis were entered into a multivariate analysis. All the reported probability values were two-tailed, and P<0.05 was considered statistically significant. SPSS version 24.0 Statistical software (IBM) and Prism GraphPad 7.0 (GraphPad Software Inc., La Jolla, CA, USA) were used for calculations and illustrations, respectively.

Figure S1 Standardized difference before and after matching. 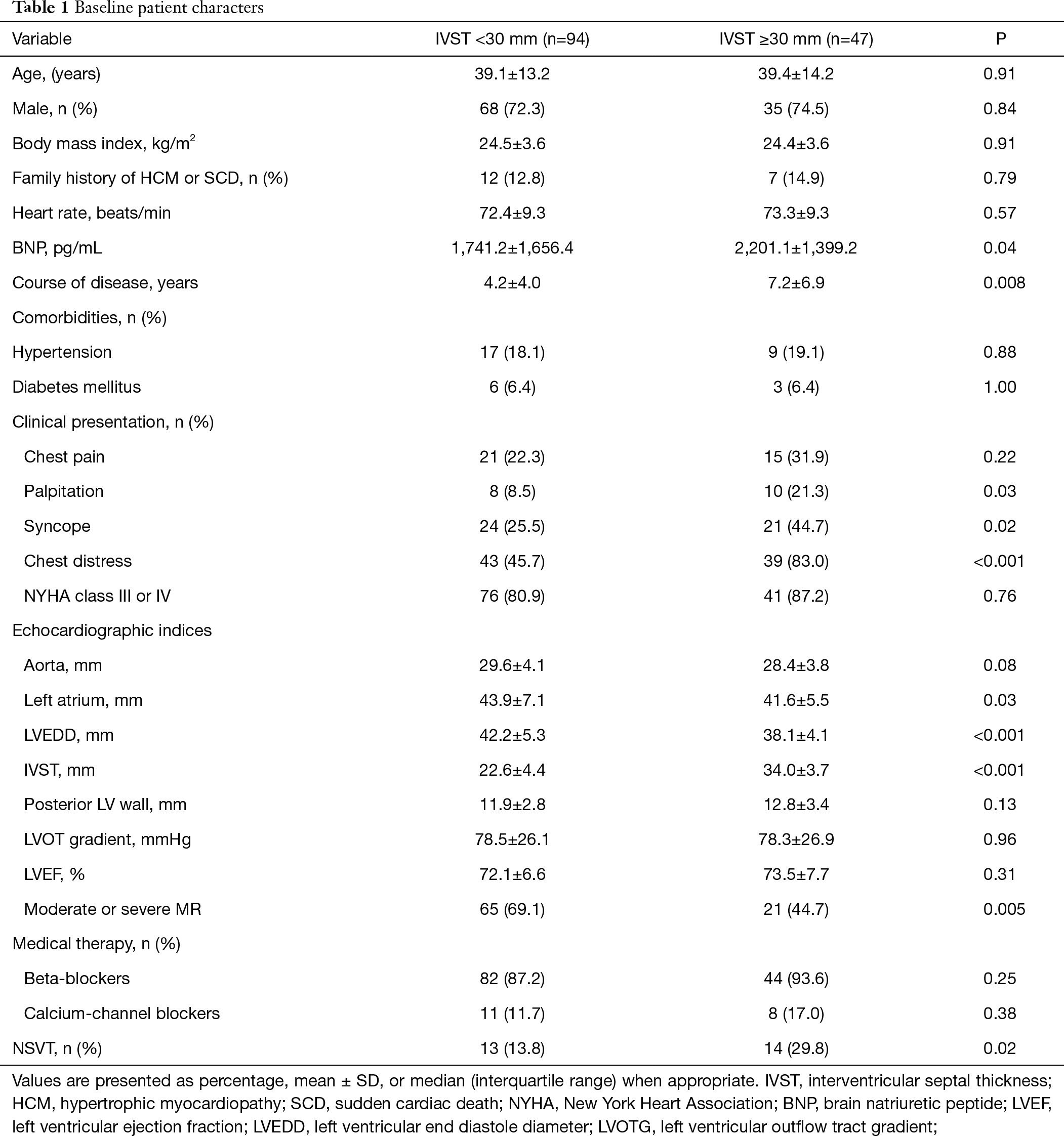 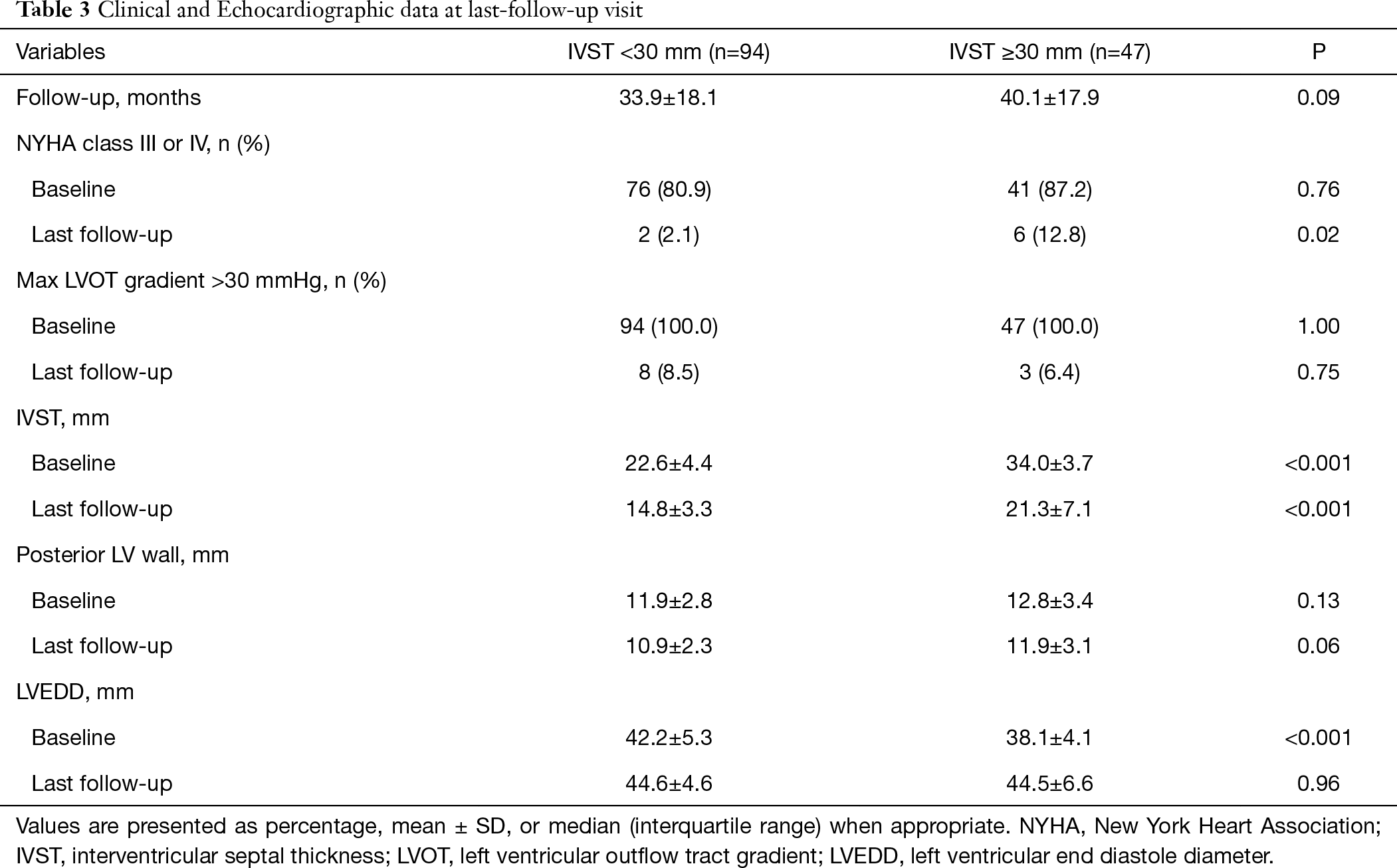 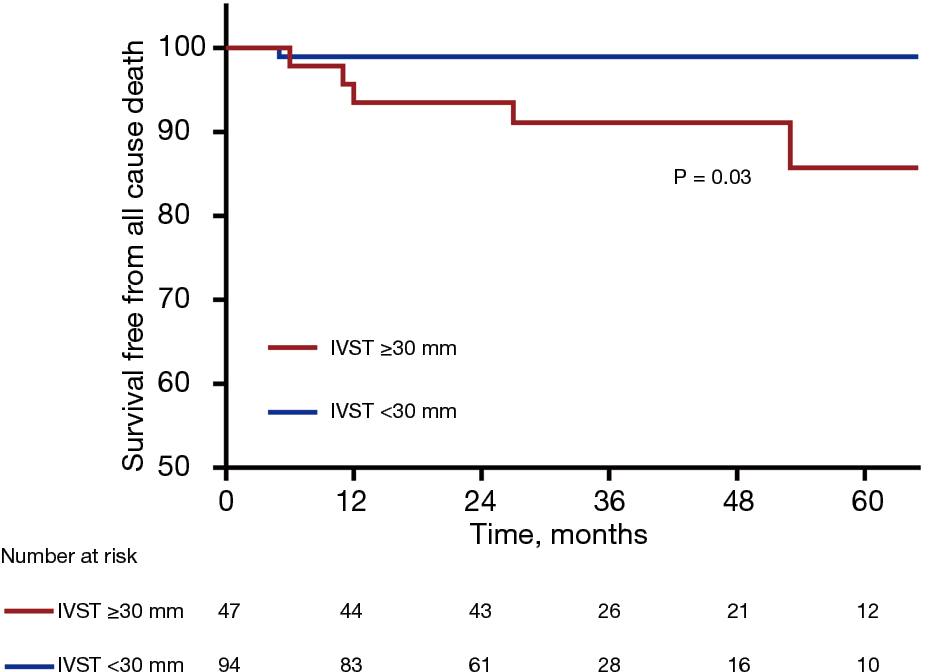 Relevant guidelines have pointed out that IVST ≥30 mm is an important risk factor for SCD in HCM patients (4,5). Recently, one study reported the impact of effective management strategies on patients with extreme IVST in HCM patients. They concluded that this special cohort is at increased arrhythmic sudden death risk, and progressive heart failure secondary to outflow obstruction was reversible after septal myectomy (6). However, they did not compare the mortality of extreme IVST after septal myectomy with a matched population. In addition, another study compared the survival rate after septal myectomy among three groups divided by the degree of IVST. The results showed that there was no difference in mortality among the different groups, even though the most extreme IVST was 21 mm in their study (11). None of these studies compared survival rates in patients with IVST ≥30 mm with survival rates in those matched patients with IVST <30 mm.

In the present study, we found that extreme IVST (IVST ≥30 mm) of hypertrophic obstructive cardiomyopathy (HOCM) patients was an independent risk factor for all-cause death after adjusting for age, sex, and body mass index. In other words, for patients with this special phenotype, the prognosis is still relatively poor even after surgery. The clinical course of the disease was long in patients with IVST ≥30 mm, which may reflect a more serious pathological change (12). In addition, the diameter of the left atrium and left ventricular end diastole were also significantly larger in patients with IVST ≥30 mm. Previous studies have reported that both parameters are markers of disease severity in HCM (13-15). In addition, the proportion of moderate or severe mitral regurgitation was high in patients with IVST <30 mm; however, the mitral valve procedure during operation was similar between the two groups. Moreover, the incidence of NSVT was also significantly high in patients with IVST ≥30 mm. Many studies have reported that NSVT was associated with SCD, cardiovascular death, and all-cause death in patients with HCM (16-18). Univariable analysis in our study showed that NSVT was related to all-cause death in this study cohort; however, multivariate analysis was not statistically significant. The small number of patients, the matched cohort of the study, and relatively short-term follow-up might be associated with the present results. Furthermore, the time of ICU stay was long in patients with extreme IVST, which means that these patients need more time to return to a stable level.

The present results might provide some information about the future therapy for this special cohort with extreme IVST. On the one hand, for extreme IVST of HOCM patients, we should pay more attention and they should be followed up more closely, with regular Holter and echocardiography monitoring (19). On the other hand, if these patients experience syncope or severe arrhythmia events after septal myectomy, recommendation of ICD implantation is necessary. Through these measures, we may be able to improve the prognosis of these patients (20).

The present study has some limitations. First, the study was conducted retrospectively in a single tertiary center, which might have led to a selection bias and may not be replicable in other centers. Second, the number of patients enrolled in this study was limited. A prospective, multicenter study with a large sample size to confirm the present results is required in the future. Third, none of the patients in our study received an ICD therapy to prevent malignant arrhythmia before and after septal myectomy, which might help to better understand the arrhythmia in these patients. Lastly, our patients did not undergo gene analysis; therefore, we could not study the difference in survival from a genetic standpoint.

The surgical outcome was poor in a matched cohort of HCM patients with IVST ≥30 mm, which was mainly reflected by mortality and the incidence of NYHA class III or IV. In addition, left ventricular end-diastolic diameter and young age were also associated with a poor prognosis in this special HCM population. Further studies on the long-term surgical outcomes of these patients are necessary.

Funding: This work was supported by National Natural Science Foundation of China (Grant No. 81770371).

Reporting Checklist: The authors have completed the STROBE reporting checklist. Available at http://dx.doi.org/10.21037/jtd-20-1705

Conflicts of Interest: All authors have completed the ICMJE uniform disclosure form (available at http://dx.doi.org/10.21037/jtd-20-1705). The authors have no conflicts of interest to declare.

Ethical Statement: The authors are accountable for all aspects of the work in ensuring that questions related to the accuracy or integrity of any part of the work are appropriately investigated and resolved. The study was conducted in accordance with the Declaration of Helsinki (as revised in 2013). The study was approved by the Institutional Review Board of Anzhen Hospital (Ethic committee study number: 2020034X), which is affiliated with Capital Medical University (Beijing, China), and individual consent for this retrospective analysis was waived.