The 5-year overall survival (OS) of esophageal carcinoma ranges from 15% to 25% (1). To improve the OS, it is very important to focus on early esophageal cancer. At present, early esophageal cancer can be resected less invasively through endoscopy. There is a consensus that mucosal esophageal adenocarcinoma should undergo endoscopic therapy. However, in patients with submucosal cancer with low-risk characteristics, there is controversy over whether endoscopic treatment is a valid alternative to esophagectomy and no consensus is achieved (2,3). Some studies have also reported that LNM and mortality increased with an increase in the depth of submucosal invasion (4,5). T1 tumor is categorized into T1a (mucosal invasion) and T1b (submucosal invasion), and T1b is further subcategorized into inner one-third (sm1), middle one-third (sm2), and deep one-third (sm3) (6) (Figure 1). With regard to T1b, some studies have reported low rates of metastasis in sm1, whereas other studies have reported high rates of metastatic lymph nodes in sm1 comparable to sm2 and sm3 (7-9). The underlining reasons for the discrepancy may be the relatively small sample of sm1 and tumor heterogeneity (4,10,11). The present study included data from the largest single-center series of Chinese patients with T1b esophageal squamous cell carcinoma (ESCC) who underwent esophagectomy. It further analyzed the depth of invasion and other histopathological risk factors for LNM and OS.

From November 2009 to March 2014, 1731 patients underwent esophagectomy for cancer at First Affiliated Hospital of Nanjing Medical University, Nanjing, Jiangsu, China. Of these, 258 patients were pathologically diagnosed to have ESCC invading the submucosa (pT1b). The inclusion criteria were (I) presence of T1b esophageal cancer, regardless of regional or distant metastases and (II) ESCC. The exclusion criteria were (I) synchronous carcinomas; (II) preoperative chemo- and/or radiotherapy; (III) cervical esophagus; (IV) R1 resection; and (V) unidentified stratification (Figure 2). This retrospective study was approved by the Institutional Review Board of First Affiliated Hospital of Nanjing Medical University (ID: 2016-SR-050), and informed consent was waived. 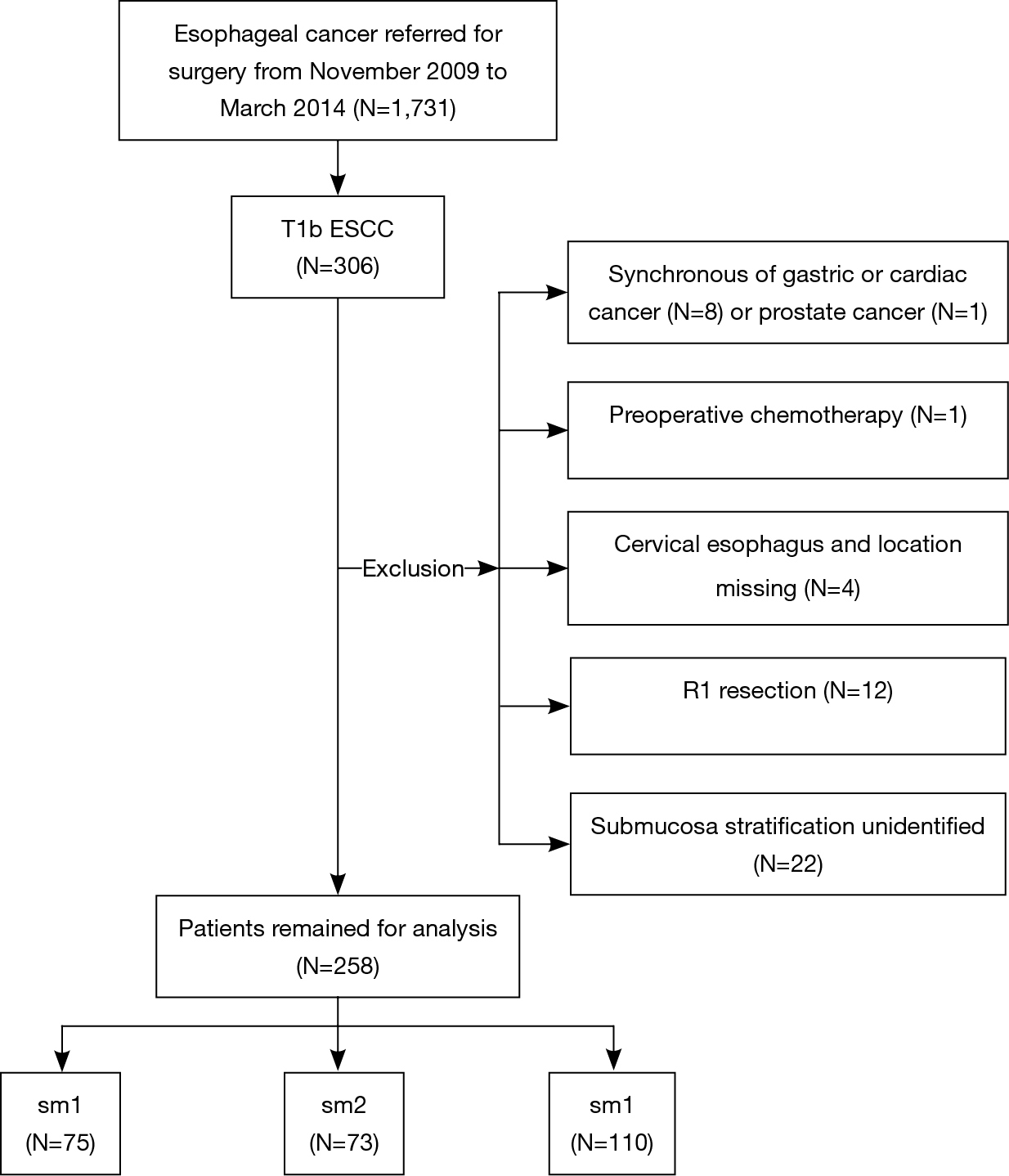 Histopathological examination of the surgery resected specimens was performed at the Department of Pathology by Mingna Li and Zhihong Zhang who were blinded to previous pathological reports. The discordant cases were jointly discussed by a group of pathologists, which comprised two senior and two intermediate level pathologists with a work experience of more than six years.

A histopathological workup of the resected specimens and lymph nodes was performed using a standardized protocol. The specimens were pinned to cork mats and fixed with 10% formalin. After macroscopic assessment and photo-documentation with reflected light microscopy, the specimens were continuously cut into 2-mm wide slices. Then, after dehydration, the material was embedded in paraffin. Subsequently, about eight 4-µm thick serial sections were obtained from each 2-mm block, and they were deparaffinized and stained with hematoxylin and eosin (H & E) for microscopic observation. All sections of the tumors were evaluated. Then the histopathological grade, submucosal invasion depth, and lymphatic vessel invasions were evaluated. Lymphatic vessel invasions were considered when lymphatic endothelial cells were demonstrable. In questionable cases, an immunohistochemical test endothelial cell marker (monoclonal antibodies D2-40, MXB, Fuzhou, China) was applied. The tumor length was defined as the maximal tumor length under microscopy. The tumor width was defined as 2 mm multiply by the number of tumor sections. Tumor volume was calculated using (length × width2)/2 according to previous literature (15,16). As subdivision of submucosal esophageal cancer is not routinely performed at our center, the specimens were re-reviewed and subcategorized into three layers according to previous studies (4,17,18) (Figure 1). When a patient had synchronous esophageal cancers, histopathological factors of the maximum penetration depth were recorded.

After the surgery, the patients were followed up at the outpatient department every three months during the first year, and then six months after that using the same modalities. At each visit, clinical symptoms, physical examination, blood tumor markers, and results of the enhanced chest and upper abdominal CT scan were recorded. If the CT scan detected an enhanced focus measuring ≥10 mm or with a tendency to grow as compared with previous examinations, then recurrence was suspected, and a biopsy was performed to verify the recurrence.

Characteristics of patients, cancer, and surgery

Cancer, surgical characteristics, and prognosis according to the depth of invasion 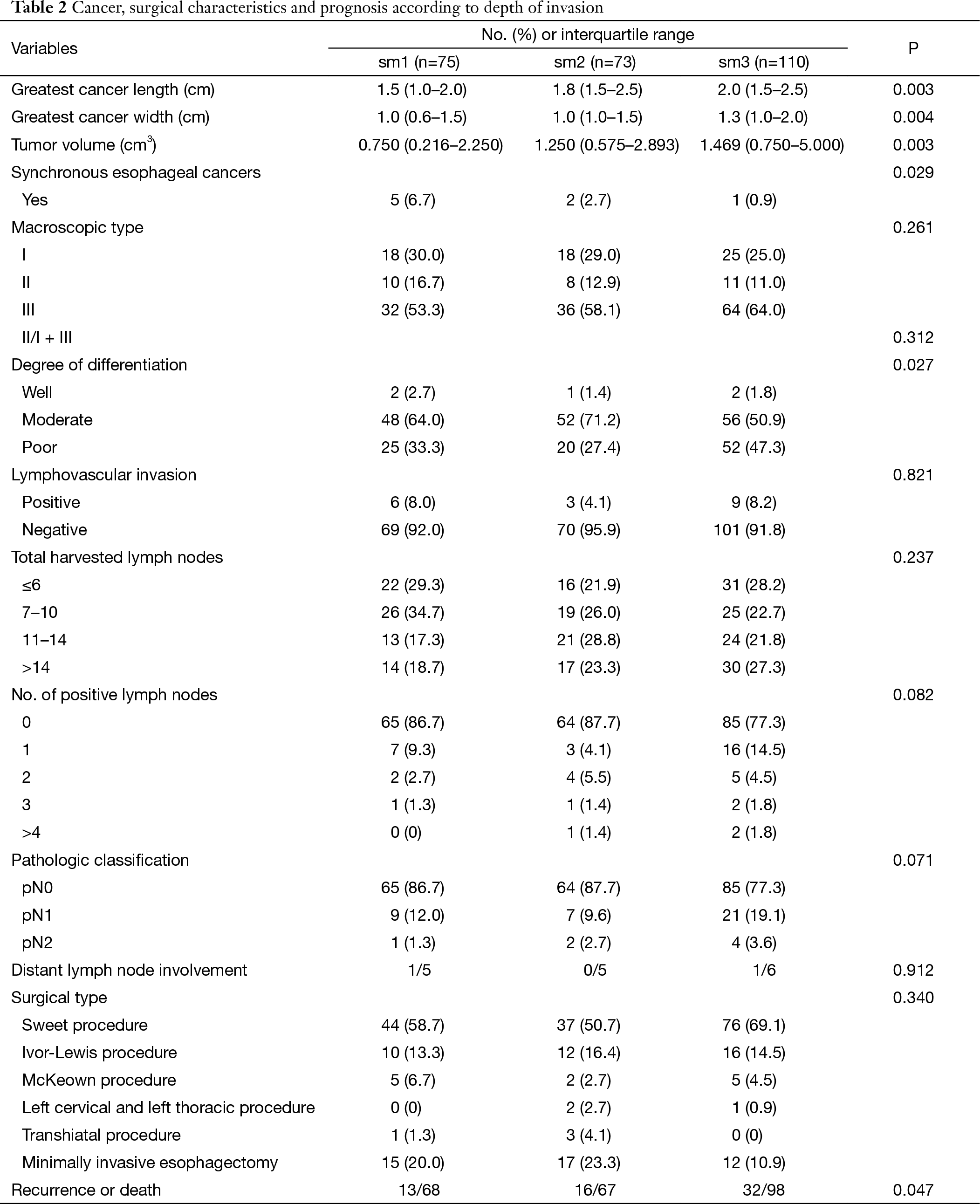 Table 2 Cancer, surgical characteristics and prognosis according to depth of invasion
Full table 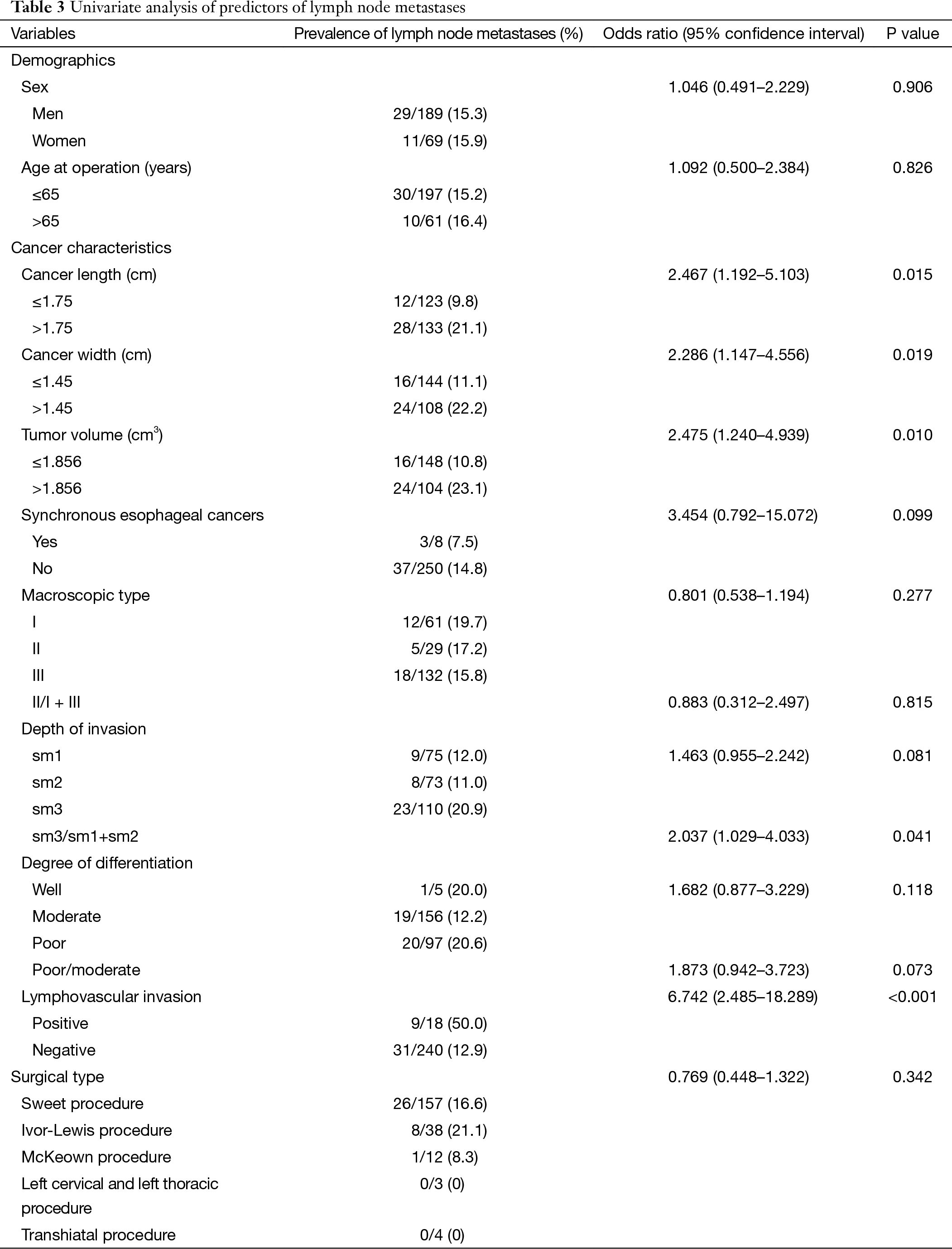 Distant metastases according to the depth of tumor invasion 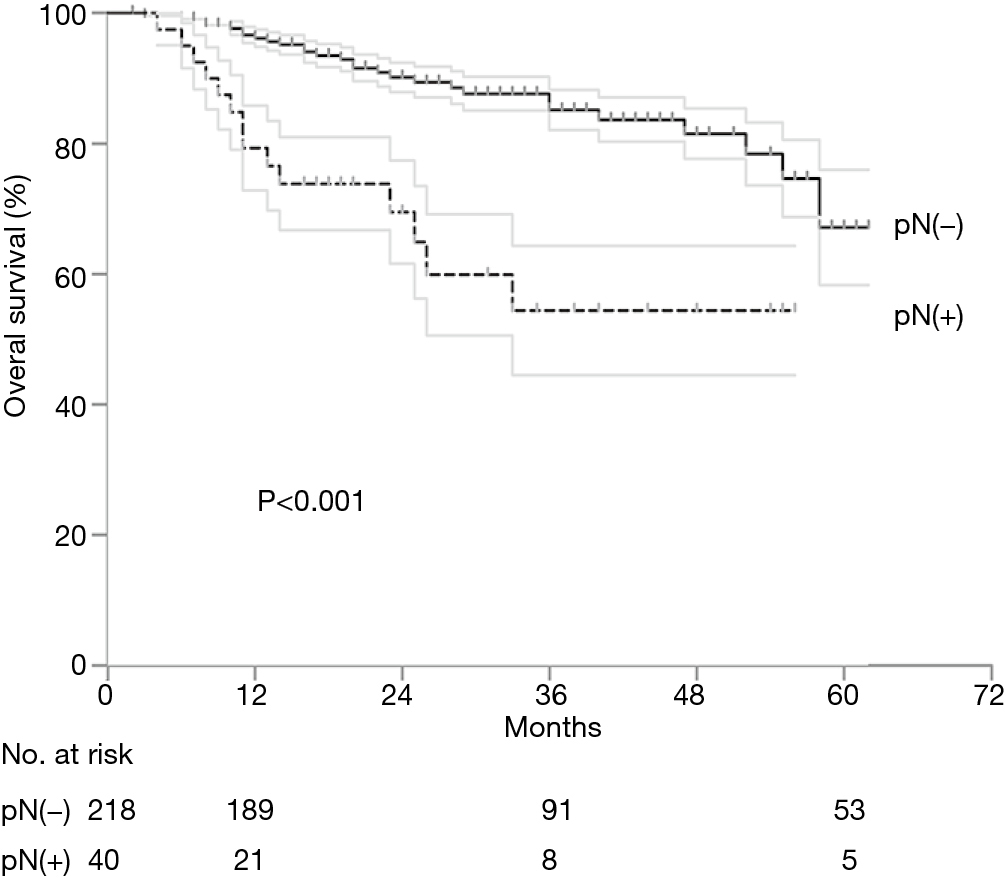 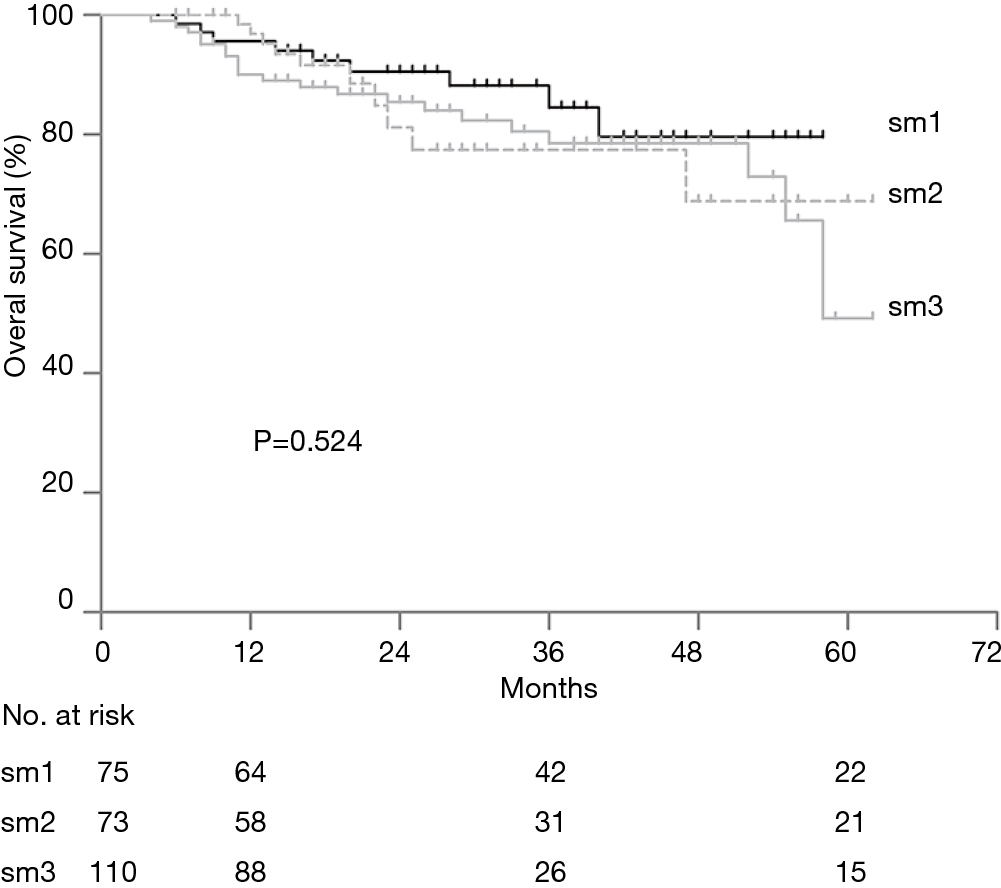 Figure 4 Overall survival after esophagectomy by depth of invasion. Tick marks indicate censored patients. Standard error is not indicated because of overlapping confusion.

Risks of lymph node metastasis (LNM), recurrence, and death according to the depth of tumor, presence of lymphovascular invasion (LVI), and pathological grade

Next, the LNM, recurrence, and death were investigated according to the depth of tumor, presence of LVI, and pathological grade (Table S2).

In China, few studies have been conducted to investigate the submucosal esophageal cancer (13,19), but this is the first exhaustive study on the impact of depth of submucosal invasion on both LNM and OS in China. We believe the results of this study will provide evidence for gastroenterologists.

Compared to two previous studies by Hölscher et al. (20) and Ancona et al. (10) that included squamous cell cancer patients, the present study showed negative results. The possible reasons for the discrepancy are as follows. First, there was presence of a very small number of well-differentiated tumors (2%) in this series. Most samples resected were moderately or poorly differentiated, and their impact on LNM may mask the effects of depth of invasion. Second, the reliability and reproducibility of measuring the depth of submucosal invasion even though the reproducibility of submucosal classification was good concerning inter- or intra-observer variability on the prerequisite of an expert pathologist (21). Third, less than one-quarter of the patients had more than 14 lymph nodes harvested which could cause pathologic under-staging and hence the negative findings. Moreover, five-year survival rates in pN0 patients are lower than that reported by Hoelscher and Ancona. We speculate that nonperformance of a much-extended lymph node dissection rather than just the genetics of the Chinese tumors could be the possible cause of the low survival rate. Thus, we propose that an extended lymph node dissection should be performed for T1b esophageal cancers.

In comparison with the report of Akutsu et al. (5) with LNM rates of 21% in sm1, 30% in sm2, and 51% in sm3, the present study showed lower LNM rates, suggesting that there may be heterogeneity of surgical procedures in this series. It has been revealed that cervical-thoracic junction is the most frequent site of lymphatic involvement in T1b tumors. The extent of lymph node dissection, especially less optimal dissection via the Sweet approach (accounted for 60.9% in this series) may have a strong impact on the outcome of lymph node yield as well as patient survival. In the present study, the median number of lymph node dissection was 9 (IQR, 6–13) in the Sweet procedure, compared with 12 (IQR, 10–16) in the Ivor-Lewis procedure and 11.5 (IQR, 7.25–18.25) in the McKeown procedure (P<0.001). This could also explain why a median number of lymph node harvested (only 10) and the overall rate of lymph node involvement (only 15.5%) appeared to be lower than that reported in other series from the eastern countries (11,22).

To improve the OS, using sensitive methods to obtain positive lymph nodes is very important; however, up to now, there is no effective method for detecting LNM. Concerning early esophageal cancer, PET/CT is not useful in the evaluation of tumor depths and lymph nodes metastasis (25), and it is not always easy to distinguish sm1, sm2, and sm3 clearly with endoscopic ultrasonography (26). It is recommended that suspected T1 esophageal cancer, which is diagnosed using endoscopic ultrasound, should undergo diagnostic endoscopic mucosal resection or endoscopic mucosal dissection (EMR/ESD), and then the subsequent treatment strategy should be decided according to the pathological specimens. However, with EMR, it is unknown how much submucosa is removed. The result of the present study showed that tumor volume >1.856 cm3 and LVI predicted lymph node metastasis. This result will be useful for indication of surgery after diagnostic endoscopic resection (ER).

There is a criticism that division of submucosa into thirds is reasonable with an esophagectomy since the whole esophagus is removed, but with ER, it is unknown how much submucosa is removed. Therefore, division into thirds is not reliable or reproducible. Sm1 corresponds approximately to less than 200 µm in ESCC in the present study (27). Considering the ongoing debate between sm1 and sm2 + sm3, the inner division of esophagectomy could be applied to the endoscopic specimens.

This study has some limitations. First, as this is a retrospective analysis, the collected information may be biased. For example, patients lost to follow-up may affect the results of survival. Another bias may be that more synchronous lesions may be associated with less LNM. However, these cases were not excluded because they were not verified in a larger population (17). Second, the patient number may be small, although we detected a power of more than 81% for submucosal subgroup status to reach their impact on OS. Third, the domain of lymph node resection is greatly affected by the preference of the surgeon and surgical approaches. For instance, Sweet procedure might limit the resection number of the upper mediastinal lymph node. The three-field lymph node resection is not yet a standard procedure in China, and this may result in missing some positive cervical lymph nodes. In addition, the follow-up duration is relatively short with a median of 26 months, which may not reveal the differential impact of depth of invasion on mortality and a longer follow-up time is needed.

The present study indicates that submucosal ESCC had a substantial rate of LNM, even at sm1. In T1b ESCC, adjusting for possible covariates, depth of invasion does not predict LNM or OS.

We are very grateful to Qian Wang, Yuanyuan Wang, Shanshan Li for their work on follow-up.