Anatomical pulmonary segmentectomy with radical lymphadenectomy has been reported to be effective for small primary lung cancers with sufficient margins (1,2). Such reduction surgery procedures may be performed using the thoracoscopic approach; they have an advantage of being minimally invasive compared with thoracotomy. Segmentectomy is a more complicated operative procedure than standard lobectomy. The formation of a segmental plane is technically essential for surgeons to detect the actual intersegmental plane and to avoid excessive resection of the lung parenchyma while maintaining a sufficient margin. Misunderstanding of anatomical structures may cause unnecessary bleeding or postoperative air leakage and inadequate resection of a non-palpable tumor in the remaining lobe. Several methods to identify the lung demarcation line have been reported (3,4). Intriguingly, methods based on lung ventilation frequently require that the intersegmental plane be approached along the inflation-deflation (ID) line at the peripheral site, while the intersegmental vein serves as a landmark at the central portion around the hilum. The ID lines, also known as segmental lines, sometimes overlap due to the existence of the pores of Kohn at the lung periphery. For methods that use the ID line to detect the segmental plane, the degree of difficulty becomes higher in patients with emphysematous lung. In such a case, the surgeons’ experience and skills are required, particularly in thoracoscopic surgery (TS).

The technique of visualizing the demarcation line based on fluorescence imaging with indocyanine green (ICG) during thoracotomy or thoracoscopy was recently developed and used by surgeons, with relatively high success rates (3,5). From our experiences during anatomical segmentectomy by TS, we noticed that ICG brightness varied in every case, depending on the blood flow or presence of anthracosis; therefore, there is a doubt on the accuracy of ICG fluorescence imaging in demarcating the segmental plane. The ICG visualization tended to be hard in patients with heavy anthracosis compared with those with light-to-middle anthracosis, although this conclusion was based on an expert opinion. When we observed a resected lung specimen from a smoker using transmitted light, only the portion around a bronchiole became bright, and the intrapulmonary structure with anthracosis had decreased permeability to light. The aims of this study were to examine whether surgeons could discern differences in ICG brightness and to investigate the factors influencing the differences in preoperative patient characteristics.

We prospectively studied 71 consecutive patients who underwent thoracoscopic sublobar resection of 74 lung segments, including subsegments, at the Aichi Cancer Center Hospital between June 2013 and April 2015. We identified the dominant or responsible segment as the largest area occupied after arterial flow reconstruction on a preoperative computed tomography (CT) scan (Synapse Vincent; Fuji, Tokyo, Japan), with a slice thickness of 1–2 mm. Low attenuation area (LAA) was simultaneously measured after reconstruction on CT mediastinal window (level, 60 HU; width, 350 HU) and was defined as areas with <−950 HU. In all participants, a stapler was used to form the segmental plane after identifying the boundary line using the ICG fluorescence system (Karl Storz; Tuttlingen, Germany). ICG was intravenously administered at 5 mg/body weight of ICG (one fifth of the usual amount for hepatic function test). Informed consent for the procedure and for the use of ICG was preoperatively obtained from all patients. Informed consent was obtained from all eligible patients after ethics committee approval.

We investigated the association of ICG brightness during intravenous ICG fluorescence-thoracoscopic anatomical segmentectomy (IIF-TS) with variables such as patient age and gender; tumor location; operative side; ratio of forced expiratory volume in 1 s to forced vital capacity (%FEV1.0); smoking index (SI), non-to-light (0 to 400), middle (401 to 800), and heavy (>800); body mass index (BMI); and LAA.

For the purpose of quantifying the efficacy of IIF-TS, we explored the regularization scale for calculating the peaks of ICG stimulation to implement the so-called ΔIntensity (ΔI). We observed blood flow after resecting the segmental arteries, veins, and bronchial branches with bronchial arteries during IIF-TS. ICG was then transported to the entire lobe, except the segment that was meant for resection, after which the demarcation line became apparent from the contrasting bloodstream with ICG. TS served as the stimulus (805 nm) for the ICG targets. The fluorescence data during the peak emission of ICG (835 nm) were obtained and used to calculate ΔI based on the differences between maximum and minimum pixel brightness in the segment to be surgically resected (Figure 1); this process was performed using intraoperative images captured by ImageJ at 200 × 200 pixels (6,7). We defined unfavorable visibility as less than 20 in ΔI.

All data were analyzed using SPSS version 17.0 (SPSS Institute Incorporated; Chicago, Illinois, USA). Sensitivity and specificity were calculated using standard formulae. Differences between the two groups were compared using the Mann-Whitney test, and comparisons among groups of more than three were calculated using the Kruskal-Wallis test. Multivariate analyses were performed using a logistic regression model. A value of P<0.05 was considered to indicate statistical significance.

The characteristics of the 71 eligible patients who underwent resection of 74 lung segments and/or subsegments are summarized in Table 1. There were 34 men and 37 women, with a mean age of 66 years (range, 29–81 years). The screens captured during thoracoscopic anatomical segmentectomy were subjected to ΔI. The ΔI was able to properly measure 73 segments and/or subsegments (98.6%). 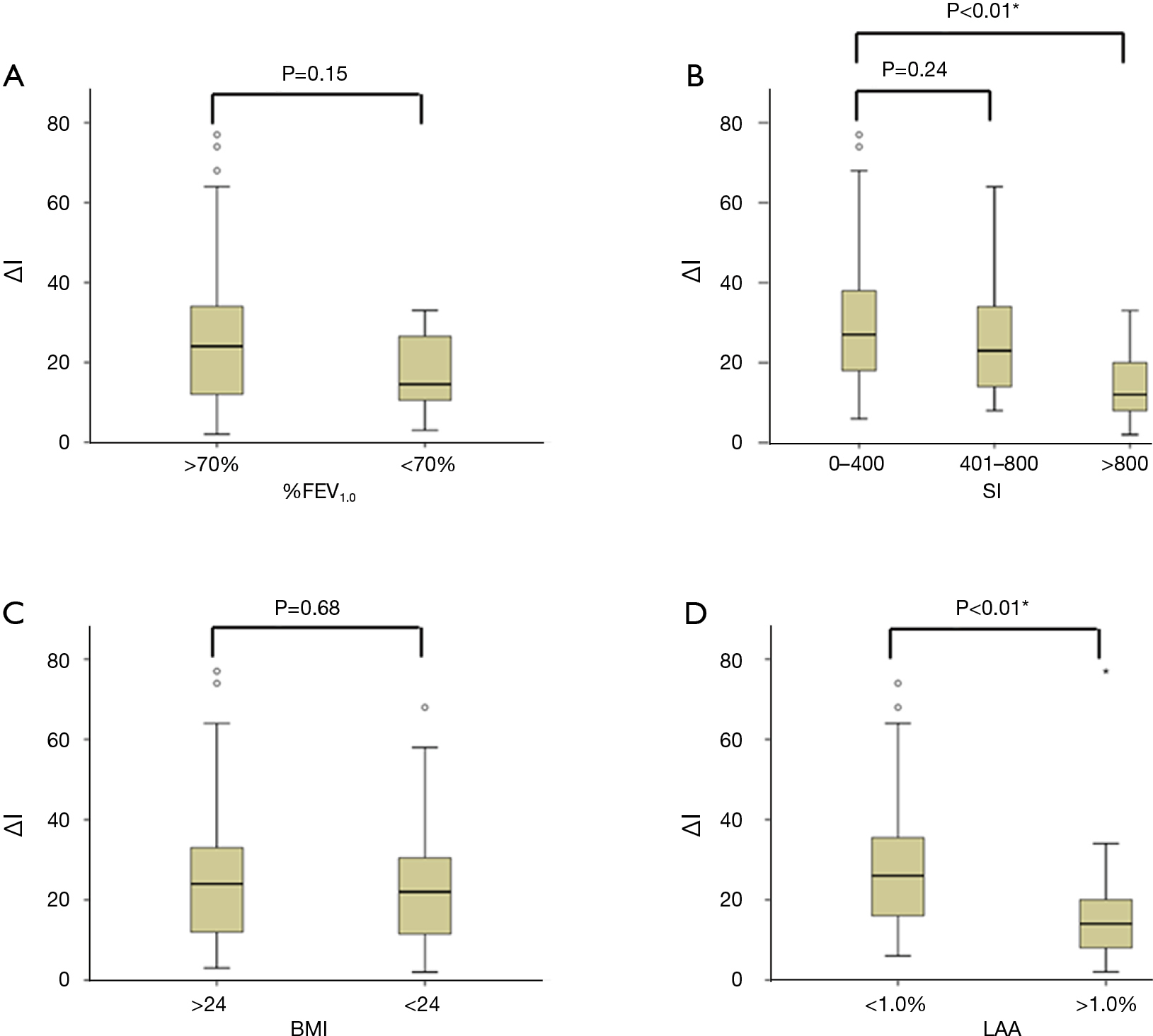 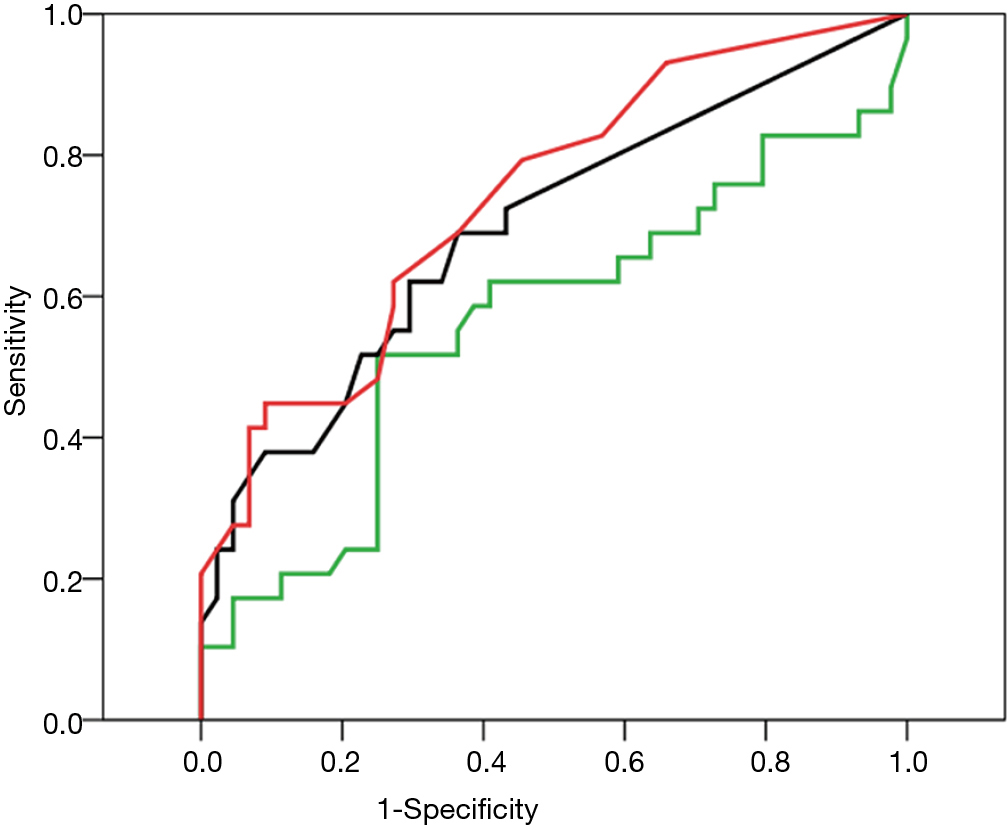 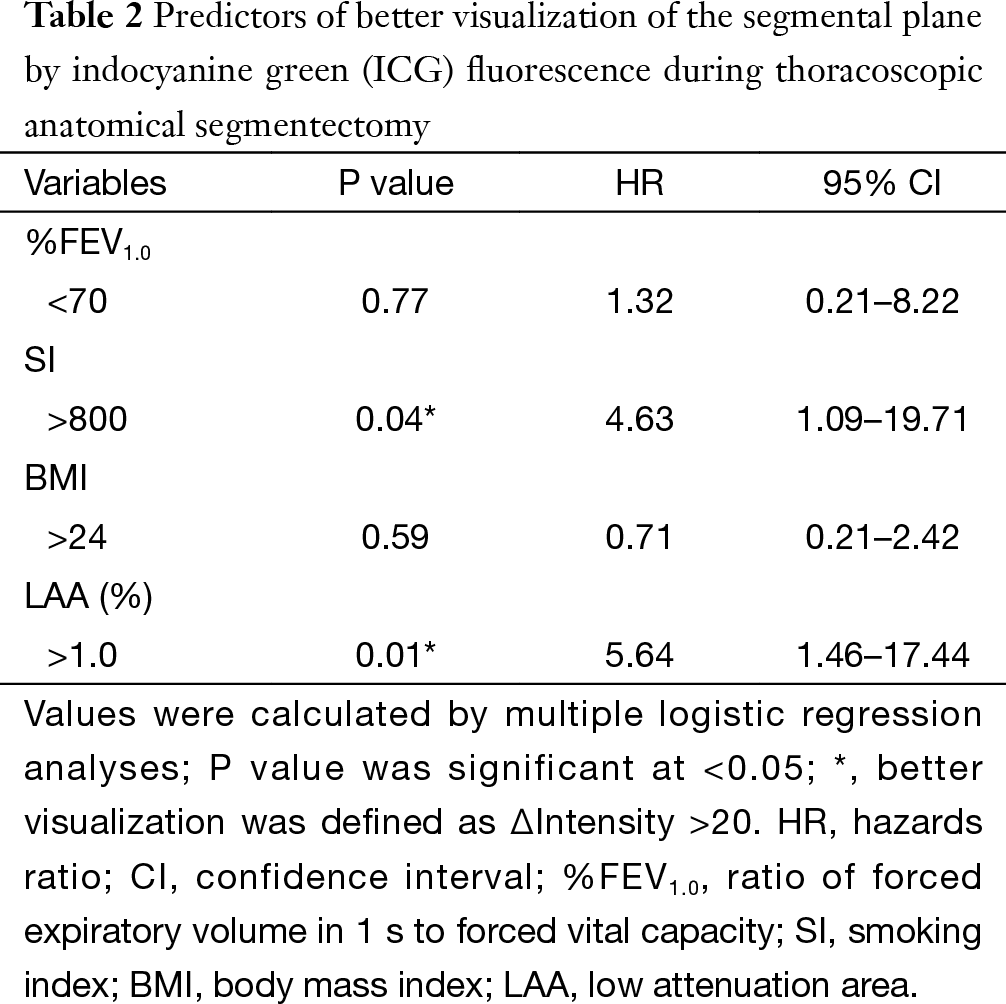 IIF-TS has shown promising results in identifying the segmental plane during TS without the limitations associated with the ID line. The restricted surgical view by the re-inflated lung parenchyma during TS is a common hindrance to surgeons. In addition, it is often difficult to identify the segmental plane in patients with severe emphysema. In 2010, Misaki et al. observed a well-defined color zonation in all patients (n=8) who underwent thoracotomy and discussed that they have developed a new clinically applicable method for visualizing adjacent lung segments based on blood supply and with the use of ICG with infrared thoracoscopy (5). They expanded this technique to 44 patients (thoracotomy in 31 and video-assisted TS or VATS in 13) (8). In 2014, Tarumi et al. additionally used infrared thoracoscopy with ICG during VATS segmentectomy and reported that the identification of the intersegmental line based on blood flow differences was possible in 11/13 (84.6%) patients after the dissection of hilar structures (8). In another study in 2013, Kasai et al. observed that infrared thoracoscopy with ICG by 1- or 2-wavelength methods was useful for detecting the intersegmental line, facilitating anatomical segmentectomy in 30 consecutive patients (9). Furthermore, they concluded that the dose of ICG was lower and that the duration of ICG staining was longer for the 1-wavelength method than for the 2-wavelength method. However, the clarity of the images was worse with the 1-wavelength method (9). IIF-TS was associated with a minimal risk of complications, although anaphylactic reaction to ICG has been reported to occur at an incidence of 0.003%, particularly at doses of higher than 0.5 mg/kg (10,11). Speich et al. reported three cases of anaphylactoid reaction to ICG that may have been mediated by a dose-dependent pseudo-allergic mechanism (11). ICG was intravenously administered to our patients at a dose of 5 mg/kg body weight, which was one fifth of the dose for examination of liver function, after ligation of the dominant pulmonary artery and bronchus with bronchial artery. Despite this small quantity, we were able to clearly demarcate the boundary of the segmental and subsegmental planes, and ICG injections could be repeated, if necessary. The success rates for performing intravenous ICG fluorescence for identification of the demarcation line during segmentectomy by thoracoscopy or thoracotomy have been reported to be relatively similar; our success rate for this series was 98.6%. Our study postulated that IIF-TS was feasible, safe, and able to identify the segmental plane; in addition, the procedure was reversible. We failed to identify the segmental plane in only one case that had abnormal development of capillaries on the lung surface, leading to the spread of ICG to the entire lobe.

A notable advantage of using ΔI was that the total number of the brightest pixels in the remaining segment that was planned for resection was markedly reduced, making the subtraction easy and thereby significantly enhancing ICG brightness (Figure 1). However, a major drawback of such method is its dependence on the presence or absence of emphysema and on the background optical structures (i.e., anthracosis or bullae), which may prevent reconstruction from a light stimulus. The two parameters, LAA >1.0% and SI >800, which limited the efficacy of IIF-TS in this study seem to be associated with background optical structures. In the GOLD report (12,13), a systematic review and meta-analysis of studies conducted in 28 countries between 1990 and 2004, and in an additional study from Japan (12,14), the prevalence of chronic obstructive pulmonary disease (COPD) was appreciably higher in smokers and ex-smokers than in non-smokers, in those over 40 years of age than in those under 40 years of age, and in men than in women (12-14). This may explain the effects of age, gender, LA, and SI that were noted in the present study. Chronic inflammation causes structural changes and narrowing of the small airways in patients with COPD. Destruction of lung parenchyma, also by inflammatory processes, leads to loss of alveolar attachments to the small airways and decreases lung elastic recoil; in turn, these changes diminish the ability of the airways to remain open during expiration (12). Furthermore, abnormalities in alveolar ventilation and a reduced pulmonary vascular bed further worsen the V/Q abnormalities in patients with COPD (12). Gotoh et al. used ICG to detect bullae or pneumothorax by infrared thoracoscopy (15). Their two-color infrared camera was safe and useful for detecting small bullous lesions; the tissue with ICG appeared as blue and that without ICG appeared as white. The tissue density of emphysematous and bullous lung tissues is lower than that of normal lung tissue; thus, blood flow is also decreased in COPD compared with that in normal lung (15).

In this study, we modified our new system to ameliorate ΔI deterioration by using IIF-TSS to account for destructive pulmonary parenchyma that could not be identified via the blue color. The excitation light of ICG wakes up the illusion that light seems to become weak with surgeon’s eyes through the monitor because of similarity of that of anthracosis in itself by emphasizing blue with IIFS-TSS. To address this issue in IIF-TS, a new thoracoscopic system was developed based on the idea. We aim to perform a prospective study in the near future to confirm our results.

There were three main limitations to the present study. One was that the accuracy of the whole segmentation was not validated. In this case, it was relatively easy to mark the superficial segmental line, but difficult to delineate segmentation in the deeper zone situated distal to the ICG line; we used staplers along the superficial segmental line while minding the surgical margin in all cases. Second was the single institution experimental design. Further validation study will be necessary to evaluate the robustness of clinical evidence on intraoperative IIF-TS. Another limitation was the method’s effectiveness in the setting of chronic inflammation, such as COPD, and in patients with abnormal capillary development on the lung surface. Although IIF-TS was regarded as a sufficiently useful technique because of its high accuracy in this study, it is important to comprehend its disadvantages and to make definite use of its peculiar characteristics.

In conclusion, IIF-TS can be regarded as a safe, feasible, highly accurate, and promising non-invasive method for imaging the segmental plane during TS. Currently, IIF-TS has the potential to replace conventional aeration methods for identification because it allows almost complete identification of the segmental plane, regardless of the degree of COPD. Further large-scale studies are needed to validate our findings.