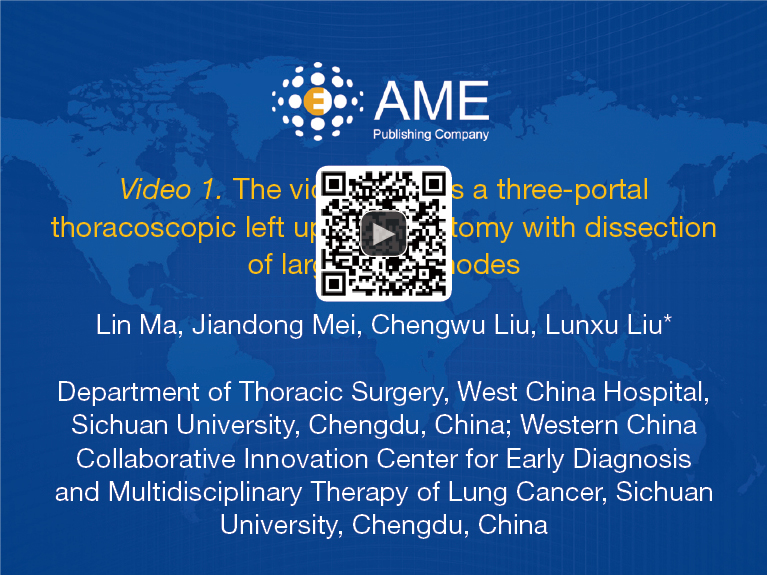 Figure 1 The video depicts a three-portal thoracoscopic left upper lobectomy with dissection of large lymph nodes (1). For safety reasons, the left main PA was clamped with an endoscopic bulldog clamp prior to lymph nodal dissection due to severe adhesions between a large lymph node and the first branch of the pulmonary artery. PA, pulmonary artery. Available online: http://www.asvide.com/articles/957

The operation was carried out under general anesthesia with double-lumen intubation. The patient was placed in the lateral decubitus position, and the procedure was performed as we previously had described (2). The thoracoscopic port (1 cm) was made in the seventh intercostal space (ICS) on the midaxillary line. The utility incision (2.5 cm) was made on the anterior axillary line in the third ICS and the assistant incision (2 cm) was made on the ninth ICS between the posterior axillary line and scapular line. The utility incision was protected with a silicone rubber wound protector (SHKB 50/40–25/25, SURKON).

Left hilar and aortopulmonary window LNs were dissected first, followed by transecting the superior pulmonary vein. We then meet with severe adhesions caused by LNs between the bronchus and the first branch of the PA. The left main pulmonary artery (LMPA) was then dissected. Thereafter, the oblique fissure was opened with an electrocoagulation hook to expose the arterial branches of the posterior and lingular segments. These two branches were ligated, followed by clamping the LMPA with a releasable Bulldog clamp. The LNs surrounding the first branch of the left PA was dissected sharply with a pair of scissors. Then the branch was transected by an endostapler with the aid of a stitch. The left upper lobar bronchus was transected at last. Finally, the specimen was removed using a bag made from a surgical glove.

When facing with complicated hilum, Watanabe et al. used a 1–0 silk suture to clamp the main PA (3). Xu et al. made an additional port to clamp the main PA with a pair of Satinsky clamp (4). In this case, we applied a releasable Bulldog clamp to achieve precontrolling of the main PA. The present strategy avoided the making of additional port and saved more space for the placement of endostapler. After clamping the main PA, sharp dissection could be performed safely to achieve a complete resection of the LNs. If the PA was injured during the dissection, distal LMPA could be clamped with another Bulldog clamp easily to reduce the blood loss and achieve thoracoscopic angioplasty. We believe that precontrol of the main PA prior to hilar dissection is useful for patients with complicated hilum during thoracoscopic surgery.